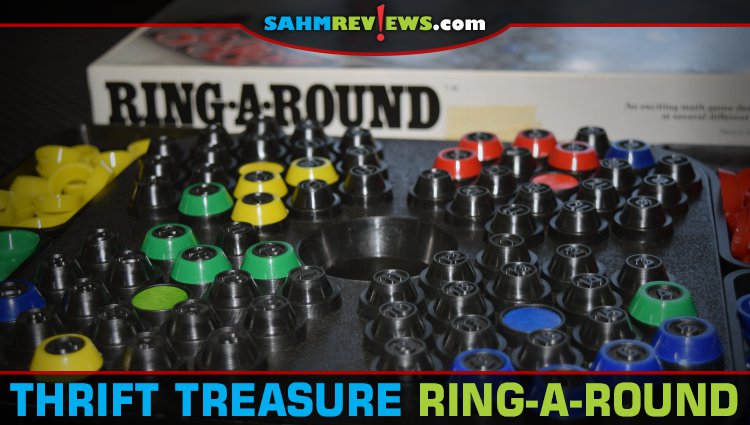 It seems like lately we’ve only been finding small games at thrift. It’s understandable since they don’t command a lot of shelf space and tend to get looked over. That’s great for us as we search high and low for misplaced or hidden gems. Some of the ones we’ve picked up over the past month or so include Qwixx, Slap ‘n Grab, and UNO Boomo. As long as shoppers leave them behind, we’ll continue to add new ones to our collection.

This week we came across a copy of Ring-a-Round by Discovery Toys. It was a coincidence as we had first seen this game just a few weeks before but passed on it since it was missing pieces. After a quick check of the contents, it was put in our cart where it would only cost us $1.88.

Ring-a-Round is another game where you’ll learn or practice your math skills while playing. Originally published in 1976, it was re-released in the early 80’s under the name Number Rings. Setting up for a game is very quick – place the plastic tray in the middle of the play area and give up to four players all nineteen of the plastic rings in their chosen player color. The three wooden dice are placed within reach of everyone.

The object of Ring-a-Round is to be the first player to “ring” all eighteen of the numbers in the sector closest to them. Much like Shut the Box, you’ll retire a number once you roll it with the dice. The active player will roll all three dice and use them in any combination to ring numbers.

You can add, subtract, multiply, or divide the values on the dice to produce the numbers you need. You may only use each die once. You can use them separately to ring three numbers, combine two dice to capture two numbers or use all three to hopefully knock out a higher value. For instance, to get the seventeen finished, you might use 6 x 3 – 1.

On your first turn you may ring any completed number. Subsequent numbers in your sector must be adjacent to another number previously finished. You may also use the results to place your rings in your opponents’ sectors to block their progress. They do not need to be adjacent to other rings and may be reclaimed at any time to use in your own sector.

Other players may remove your block by rolling the same value and sending your ring to the bone yard. These rings stay there until you run out of your own rings and then may only be used in your sector – they may not be used to block again. The winner of Ring-a-Round is the first player to ring all the bases in their sector with their own color rings.

Because of the requirement to only finish numbers adjacent to other completed ones, the game can drag a bit as you try to roll exactly what you need to finish. The game does lend itself well to house rules. Off the top of my head, I would allow other players to use any two dice to complete numbers in their sector when it is someone else’s turn. I would also allow the active player to reroll any of the dice one time. This will fill the board faster and introduce some strategy because your rolls might help other players.

Ring-a-Round is no longer available new, but you will find quite a few available on eBay. As always, make sure all the pieces are present as the game would not be playable without them. If you have or get a copy, I’d love to hear what house rules you implement!

Do you ever make your own rules for games?