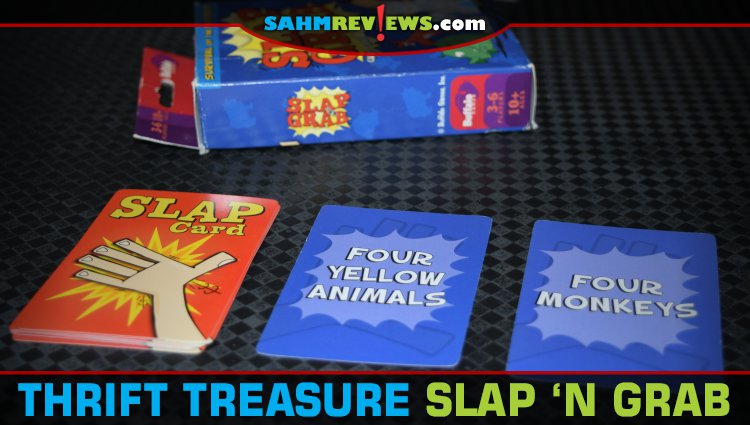 Sometimes I purchase games at thrift because they look fun to play. Other times it may be because the artwork looks cool. On more than one occasion I’ve been swayed by the cheap price, no matter how badly the game is rated on BoardGameGeek. This week’s Thrift Treasure was purchased for a completely different reason – the title.

The name Slap ‘n Grab certainly hasn’t aged well and couldn’t have been that great of an idea when it was originally issued in 2008. While I’m sure it was meant to describe the mechanics of the game, it can also as easily be identified with unwanted harassment. I’ll assume it’s the former and just go with that.

Slap ‘n Grab is a speed-based card game remarkably like Halli Galli. In fact, it is almost identical except for one item. In Halli Galli you are looking for iconography in sets of five. In Slap ‘n Grab, the thing everyone is trying to identify changes from round to round. Otherwise, the games are exactly alike.

Inside the box are eighty-five animal cards and seventeen slap cards. Shuffle each deck separately. Deal out the entire deck of animal cards to all players, even if they don’t divide equally (Slap ‘n Grab supports 3-6 players). Participants keep their cards face down in front of them as a draw deck. The deck of slap cards is set in the middle of the play area and two drawn face up next to it. These two cards dictate what players will be trying to find.

Each animal card has one, two, or three animals of one type – either elephants, kangaroos, rhinos, monkeys, or cows. They will also be one of four colors – red, green, yellow, or blue. Additionally, there are a couple of “any color” animal cards that may substitute for any valid color. Beginning with the first player, they will flip over the top card away from them and place it face-up above their deck. The next player, in order, will do the same. This continues until someone spots a combination of all face-up cards that match one of the two slap card requirements.

As soon as the exact requirement for either slap card is met, the first person to slap the correct slap card scores by taking the card. In someone slaps a card incorrectly, that person must return a previously won slap card to the bottom of the slap deck. When all the slap cards have been claimed, the game is over. Whoever has the most slap cards in their possession wins Slap ‘n Grab!

Out of print for more than a decade, you can still find new and used copies on eBay. At one point this game was available at retail for only $1.00, so I wouldn’t pay much more if you’re in the market. One will certainly pop up at thrift or a yard sale for around that price! Otherwise, get yourself a copy of Halli Galli on Amazon. It’s the better version.

What game do you enjoy that is a remake of another title?