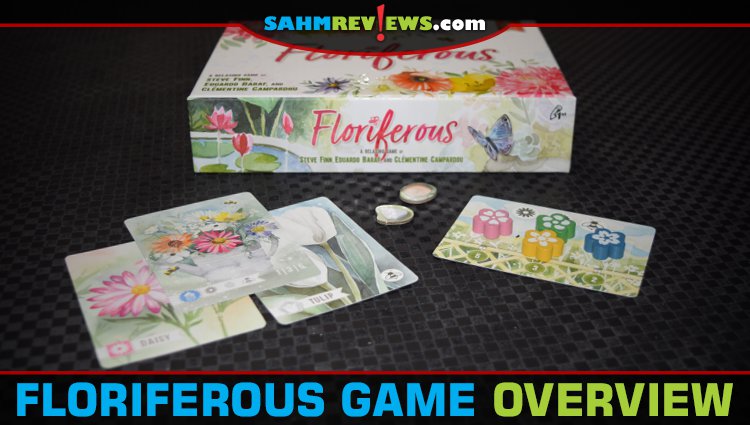 We spent the holidays celebrating with my mother-in-law. No matter what time of year we visit, we can always count on a bouquet of flowers on the island in her kitchen. To further emphasize this, she runs a slideshow on her kitchen computer that shows all the prior bouquets she has received. I think she said her gentleman friend brings her a new bouquet whenever the old one starts to wither. It’s sweet. As I sat down to play Floriferous from Pencil First Games, that’s the first thing I thought of: The variety of arrangements that bless her house with their beauty.

Floriferous is a set collection game that takes place over the course of three days (rounds), each represented by a 5-turn trip across the garden. The way the garden is arranged is based on the number of players so be sure to check the instructions carefully as ours is set up for four players. There are three types of cards: Garden, Desire and Bounty. You’ll randomly select three Bounty cards and return the rest to the box as they won’t be used until you play another game. Hooray for built-in variety! These cards will be placed in the center of the table followed by a grid of Garden cards and one row of Desire cards. Stones are placed on some of the cards as noted in the instructions. Each player takes a gardener pawn and the associated flower tokens to match. The starting player places their token to the left of the first row of flowers with each subsequent player clockwise adding theirs to the next row. You’re ready to play!

Starting with the gardener closest to the top, players select a card from the adjacent column in the garden (represented by both the Garden and Desire cards) then move their gardener to that empty space. Garden cards include various types of flowers, arrangements and sculptures while Desire cards are specifically used for end-game scoring. Cards that have been collected are placed in front of the player. After each player has taken their turn, the process repeats until all gardeners are on the far side of the grid.

When the gardeners have reached the far side of the garden, everyone examines the Bounty cards to determine if those goals have been met. If so, any players who did will place their flower token on the appropriate space on the card. Clear all non-bounty cards from the garden and refill it in the same manner as the start of the game.

Day two involves a return trip across the newly planted garden in the same manner as the first. You’ll continue collecting an assortment of flower cards that feature different species of flowers as well as some bugs. Arrangement and Sculpture cards are additional scoring opportunities, but that also means you’re picking less flowers. So you’ll have to balance whether you select flowers or cards that allow you to score. After razing the garden following the second day, re-plant the flower bed again. Make one last trip across then complete the final scoring.

One of the things that I love about Floriferous (aside from the pretty artwork) is that there are multiple ways to score points. You can collect the small cards that let award points for same (or different) flower types, colors or bugs. There are bounty cards that award you based on which round you complete them. Arrangement cards, statues and pebbles offer additional scoring. There are a lot of options so for people like me who have trouble making decisions, I know if I grabbed a card that felt useless, there’s potential in later rounds for me to grab a card that allows it to score.

If you’re ready to give it a shot, I encourage you to watch our Facebook Reel to learn how to play Floriferous in 30 seconds! You can pick up a copy direct from Pencil First Games or add it to your cart to arrive with your next Amazon purchase. Pencil First Games offers an assortment of quality games, so be sure to check out their other offerings such as Herbaceous, The Whatnot Cabinet and The One-Hundred Torii. Follow them on Facebook and Twitter for news and updates including details about their Kickstarter projects.

How often do you display fresh cut flowers in your home?