We picked up Push Over by Parker Brothers some time ago at our Goodwill. Like normal, we opened the game in the store to make sure all of the pieces were present. As I went through the inventory, all of the custom parts appeared present. The only things that I could not locate were “3 numbered dice”. In the box was a pipped six-sided die, so I figured I could add a couple more from my stash at home.

Although the instructions listed “3 numbered dice”, what it wasn’t specific about was the fact they had custom numbering. The previous owner obviously lost them and tried to replace all three with one regular die. It probably allowed them to play the game, but not as the rules intended. A quick glance at the images for Push Over on BoardGameGeek showed a photo of the dice that were missing. Fortunately I had a somewhat easy solution. 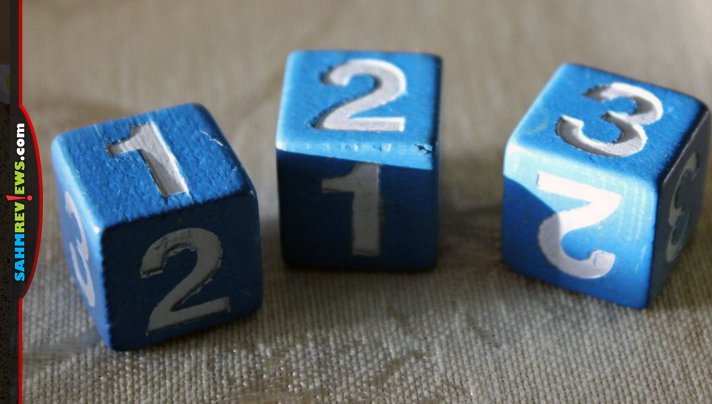 I’ve mentioned before how we always pick up extra game pieces from the bins when we make a stop at a Goodwill outlet. Game parts are very light and most will only set us back a penny or two. At some point I grabbed a number of 1″ plastic cubes, which were probably from a teaching supply kit. The original dice, shown above, were blue. I grabbed three of these blue cubes and quickly drew out some numbers to be cut on my Cricut machine. 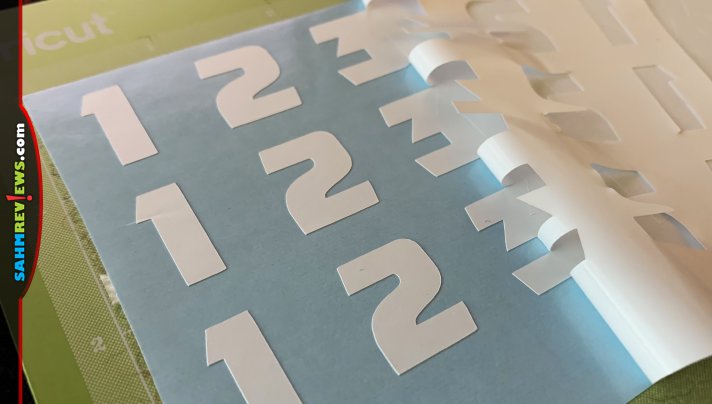 The dice featured the numbers 1-3, with each appearing twice. Three dice were ideal because the game of Push Over has a push-your-luck element to it. After a couple minutes on the Cricut, the numbers were ready for application. Quite an upgrade and should work well, as long as we don’t lose them too! 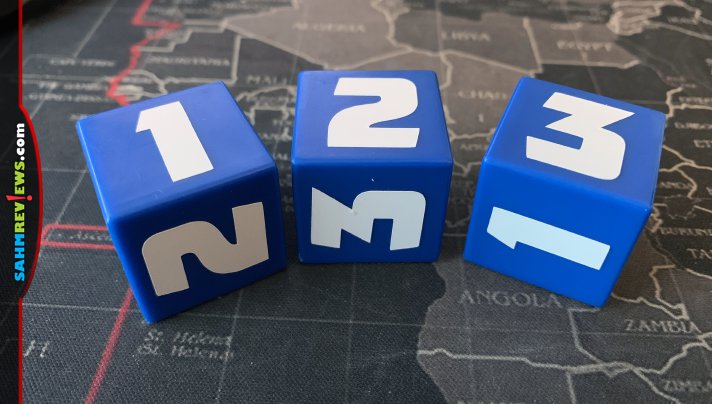 Push Over is a game that tries to simulate a marathon run by athletes carrying another person on their back. A custom injection molded game board is included along with a pile of yellow plastic rings, four “bottom” runners of the same color and four “top” characters in different player colors. Each person chooses a player color and places their top runner on top of one of the bottom runners. One of the rings is placed into the designated Pot on the board and a first player is chosen. A game of Push Over is ready to begin! 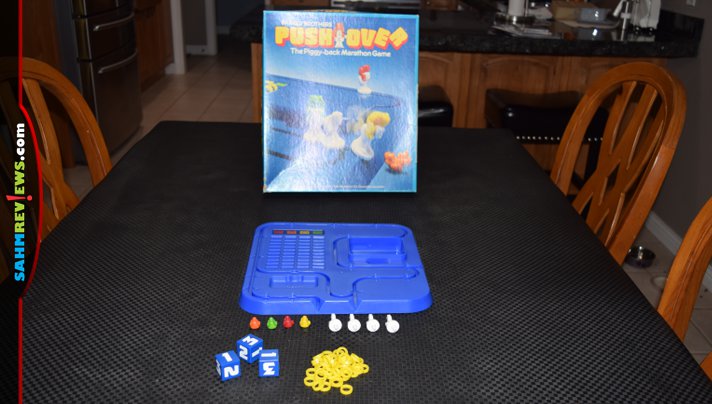 On your turn you will start by rolling one die. Again, the results will be 1-3 with these custom dice. Your goal is to roll as many as you like (up to three) without exceeding a total of four. You may stop after any roll, but if your last roll brings your total to over four, you’ll “roll out”. This causes you to fall off your bottom runner (who stays on the board) and your top runner is returned to the start. Additionally, another ring is added to the pot from the general supply. In order to get back into the race on your next turn, there must be a bottom runner available from being pushed off the board (more on that in a minute). Otherwise, you’ll lose your turn. 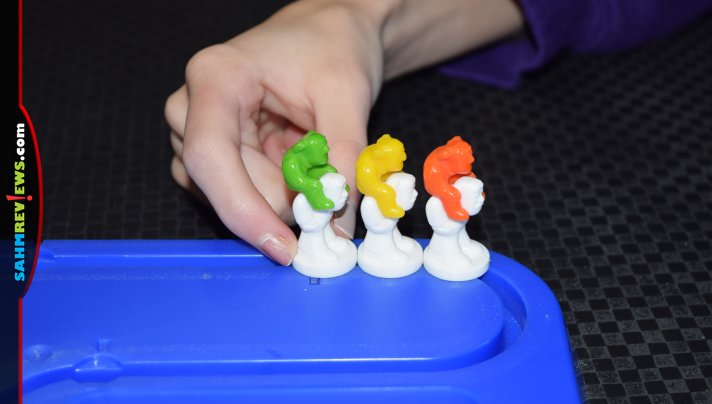 When you elect to quit rolling with a total of four or less, you will multiply your total by the number of dice you used. Move your runners along the track one space for each circular stop on the board. Any runners ahead of you will be pushed along with you. If you push them to one of the two push-off points, their runners will leave the track and fall off the board. The top runner is returned to the start while the bottom runner is now available for any player who needs it. 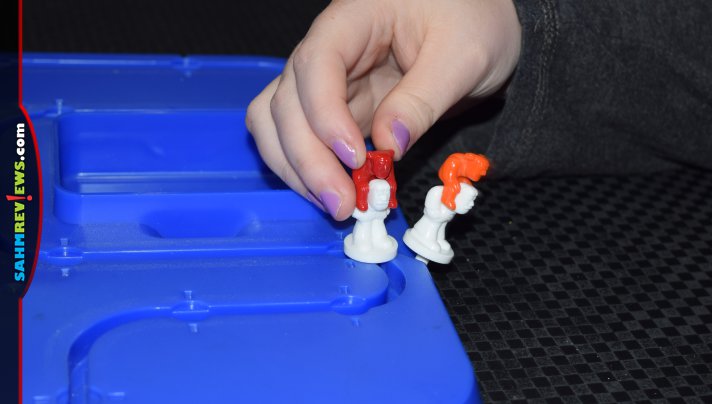 There is one special stopping point on the board and that is right in front of the pot. If you stop on it or pass by, you win all of the chips in the pot at that time. These are lined up underneath your matching player color on the board in columns. When the pot it won, refill it with one ring from the general supply. The first person to fill their column by collecting ten or more rings wins Push Over (eight in a two-player game)!

As you have probably figured out, you want to stay on the track as long as possible. Without the custom dice, this would be a simple roll-and-move game probably not worth purchasing. But the push-your-luck mechanic and multiplication of the result as a reward makes for some wild swings in the game. The plastic board is a continuous loop with a start area that keeps you safe from other runners (similar to a horse track).  With twelve stops along the main loop, it is possible to run completely around the board in one turn, knocking all other opponents off the track (a four total result on three dice = twelve). 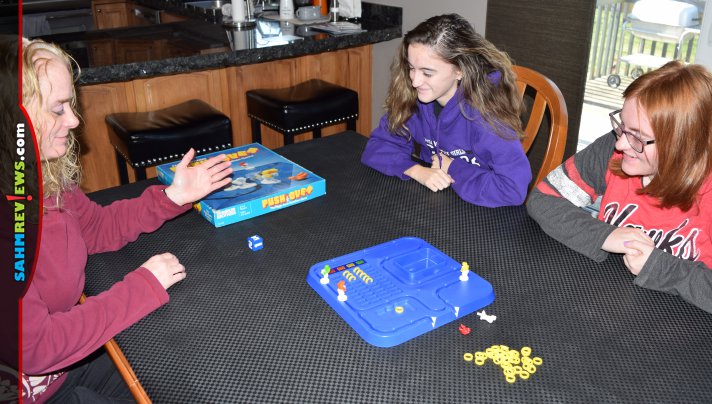 Add in the fact that the game is so well-made, it is certainly worth picking up at thrift just for the nostalgia factor. This 1981 issue shouldn’t be that hard to find since it was made for mass market, but if you have trouble locating a copy, there are a number for sale on eBay for pretty reasonable prices. Just make sure the custom dice are included!

Have you ever made your own board game replacement pieces?

22 thoughts on “Thrift Treasure: Push Over Board Game”