Not only have we been having fun with brand new party games this week, we’ve been lucky enough to find a few at thrift. (May Cause) Side Effects and Splurt! are both good examples of modern party games and what can be expected in the market. The game we found at our local Goodwill, Talkin’ Tango by Patch Products, still holds up even though it was published 20 years ago.

Inside the box is a large bag of scoring tokens, two custom dice, 50 character cards (5 each of 10 different), eight plastic stands (Talkin’ Tango supports 4-8 players) and a deck of 150 word cards. There are twelve words on each card, and if my math is correct, means the game has 1800 different possible answers! Interestingly, instead of using sand timers, Patch elected to include an electronic version that can handle 10, 20 and 30-second increments. Of course it is battery powered. And of course it uses non-standard batteries. Fortunately today we have timers on our cell phones, so even if broken or missing, the game is still playable with this substitution. 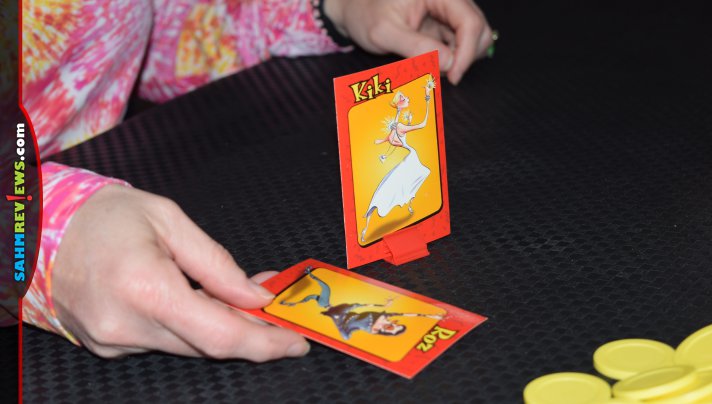 Each player receives one of the character cards and places it in one of the stands. This will be kept in front of you so everyone knows who you are playing as. The remaining matching character cards are separated from the rest of the deck, shuffled and placed in the center of the play area along with the shuffled deck of word cards. 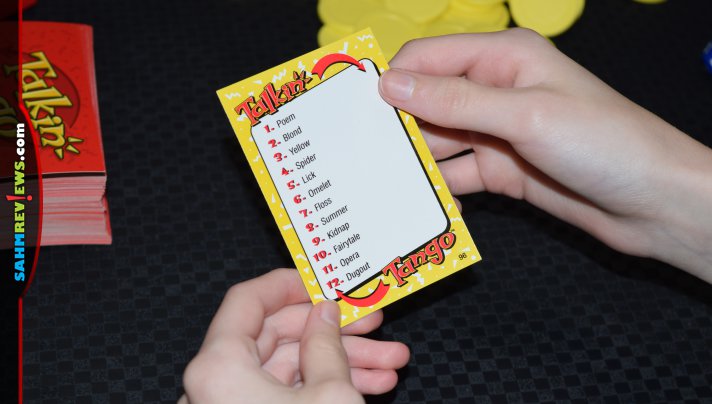 Talkin’ Tango is played over a number of rounds, agreed upon at the beginning of the game (typical is three). During each round, all players will take a turn as the active player. On your turn you will draw a character card from the deck and show it. This person is your teammate for the turn (if you select your own, choose anyone). You’ll then draw a word card and roll the 12-sided die. This determines your word for the round, which you also show to your partner. 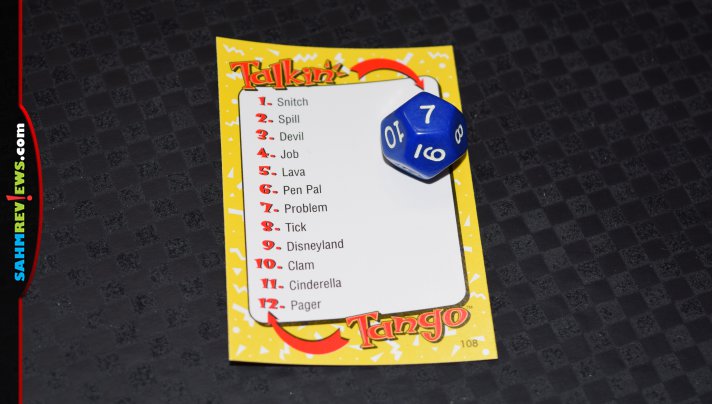 Without discussing strategy, you agree on an amount of time you think will be needed by another player to guess your word. Choosing a shorter time and being correct will earn you more tokens. Of course, if you are incorrect, you will pay a greater amount as well. Once the timer starts, you and your teammate will construct a sentence improv-style to get the other players to guess your word. Each of you takes turns saying one word of a sentence. For instance, if your word is “ear”, your sentence might go something like this:

All other players may call out any answer at any time. There is no penalty for them being incorrect and they may guess as many times as they like. When someone does answer with the correct word before the timer stops, all three of you (you, your teammate and the correct guesser) earn one, two or three tokens (depending upon the amount of time – 30, 20  or 10 seconds). If no one guesses correctly by the time the timer runs out, you and your teammate must pay one, two or three chips to the bank. The player with the most chips at the end of three rounds is the winner of Talkin’ Tango!

An additional six-sided die with a word on each face is included to make things a little more difficult. If playing with this option, roll the die at the beginning of the turn and the active player must use that word to begin the sentence. The rest of the turn is played normally. 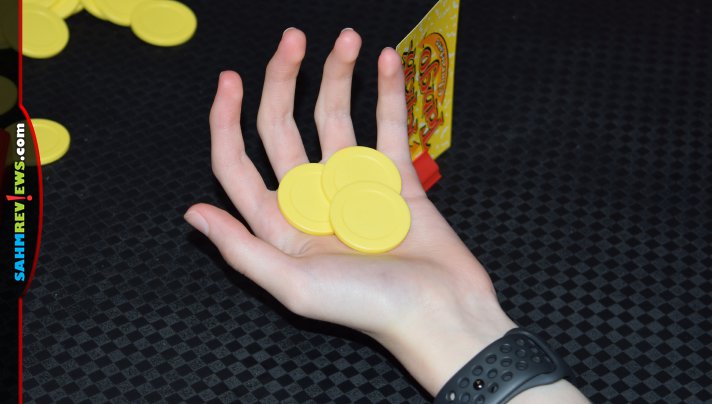 Like many older games, we found a glaring flaw in the scoring. If someone is ahead and either the active player or a teammate, the other players can simply choose not to answer at all and let the timer run out. This will cause the two teammates to lose tokens without penalty to the other players. Definitely not in the spirit of good gaming, but still something that should have been addressed before publishing.

Long out of print, you can easily find copies of Talkin’ Tango on eBay for under $10 plus shipping. There was another version issued in 2007 that did away with the electronic timer in favor of a sand timer (and supposedly removing the ability to earn extra points by choosing the amount of time). Additionally, it provided cardboard tokens instead of plastic. If you have the opportunity, go for the earlier issue.

Do you enjoy games with electronic parts?