Last year about this time we featured one of the many games from the 60’s/70’s that were known as “bookshelf games”, Feudal. Issued by 3M, these were complex strategy games that came in a box that was made to look good on a bookshelf. Much like a series of novels, the thought was you would want to collect them all to have the complete set. Based on the number of these we see at thrift, I’d say it worked pretty well.

Some titles, like Facts in Five, are much more common than others. It’s been our experience that the word or trivia games are more plentiful than ones like Feudal that appear to be more thinky or strategic. This week we’re playing another of the series, Jumpin, that is one we don’t find often at thrift. At least 100% complete, that is! 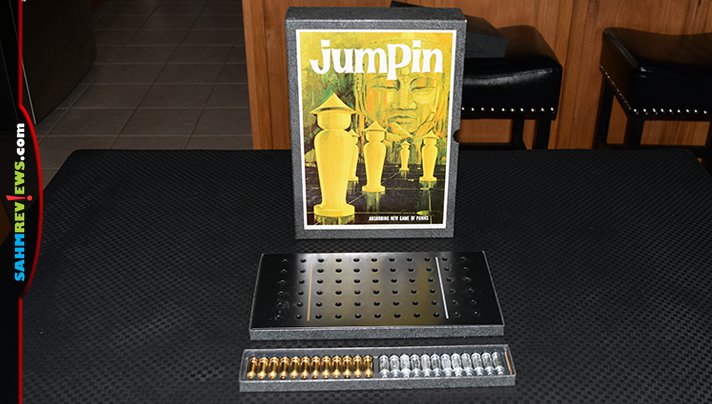 Looking at the board, we can see where Jumpin was probably an inspiration for later games. Both Quicksand and Yali sport similar mechanics with their own twist. This “Absorbing Game of Pawns” challenges two players to compete to be the first to get their twelve pawns to the other side of the board. 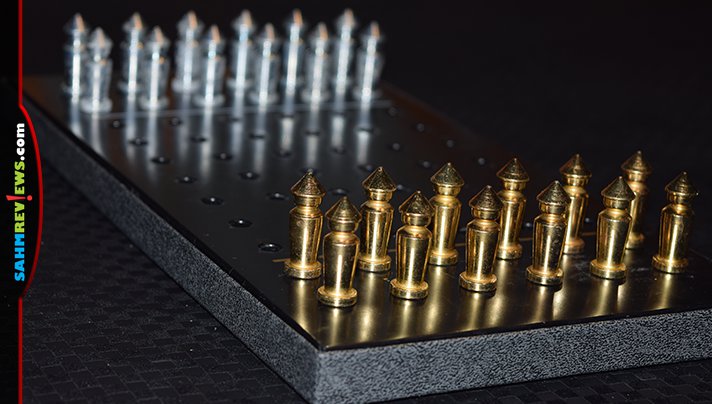 Unlike the myriad of games like this, movement is the exact opposite of what you’d expect. Most games allow you to move a piece one space or jump one piece to move forward faster. In Jumpin, you HAVE to jump to move. You cannot simply move your piece forward! On your turn you must take one of your pawns and jump it over another or a row of pawns! 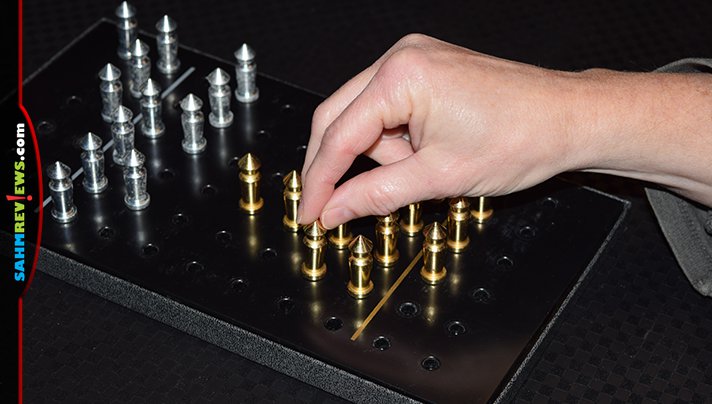 It doesn’t matter whose pawns you are jumping over nor how many in a row there are, as long as there is an empty space to land in on the other side. You may continue to jump, even in a different direction, as long as valid moves are present.

You must be careful not to strand one of your pawns or it will be a certain loss. You must always make a move on your turn, so if you have one last stranded piece, you have to begin jumping backwards in order to retrieve it! Moral of the story – don’t strand your pieces! 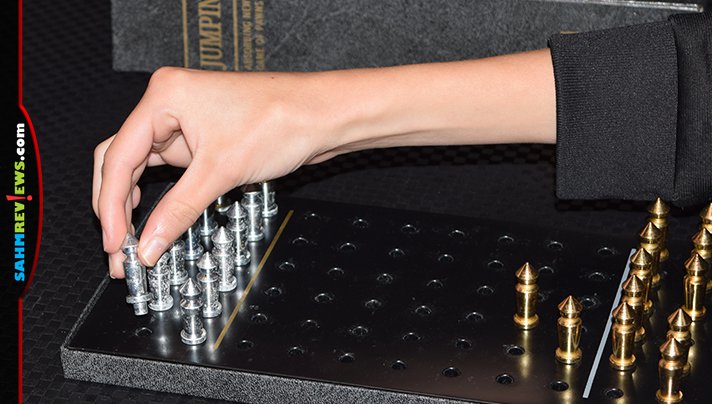 The first person to get all twelve of their pieces to the opposite end of the board wins Jumpin! “Medal Play” rules feature a match over four games, with each game being scored by the number of turns the second place player needs to get all their pieces home. The person with the lowest total after four games is declared the winner!

You can find a number of complete copies of Jumpin on eBay for a wide range of prices. If you’re lucky enough to find one at thrift, make sure all the metal pawns (24 in total) are present and take a look at the plastic board for cracks. I’m certain that 3M didn’t anticipate these still being played 50+ years later and plastic doesn’t always age well.

Have you played any of the 3M bookshelf games?