Did you have a chance to look over our guide to family games last Monday, list of S.T.E.A.M. gift ideas on Wednesday or games for teens and adults on Friday? Hopefully they are providing some ideas to assist with your holiday shopping. We have no shortage of suggestions and here’s our latest gift guide with more. One of our neighbors has a large family and said they are always searching for games for multiple players so this guide is tipping a hat to them – and everyone who is walking in the same shoes. Whether you gather with family or friends, there’s a game out there that will be a good fit.

This list of party games includes a number of themes and game styles for a variety of ages. As you run through the list and read the descriptions, you can read more details and see additional pictures by clicking the

logo. Of course, keep watch for some of these to show up as part of our Mega Giveaway promotion! 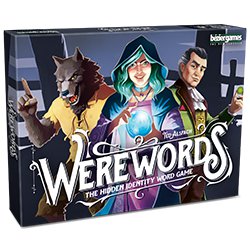 In Werewords, players guess a secret word using yes and no questions…simple enough? Not so much, because there is at least one Werewolf in the bunch trying to throw everyone off course; the Seer will be trying to help everyone along but she must be covert to keep herself safe!

The free iOS/Android app provides thousands of word lists options in various difficulties so anyone can play; the perfect family game night addition! 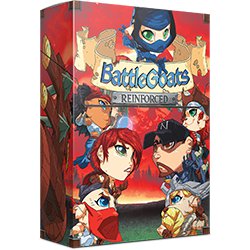 BattleGoats: Reinforced is an expanded reprint of BattleGoats, a goat filled modern combination of classic card games like Memory and War. Players alternate turns in card battle to determine a winner using highest number value. Number values change as the game goes on. The person with the last card in play wins. Rules are easy to pick up and games play in as little as 5-30 minutes for groups of 2-9 players ages 8+. 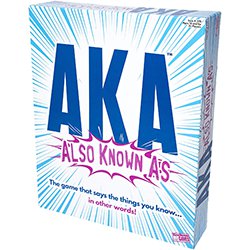 AKA is the game that replaces the names of famous titles with what they might Also Be Known As! For example:
– The Actor/Rapper Also Known As “Half of an Arnold Palmer.”*
Or
– The Superhero Also Known As “Arachnid Guy.”**
Can you figure out the answers? Take your best guess to see if you get it right. Your best guess just might be Also Known As The Answer. The winner of AKA is Also Known As the player who gets enough answers correct.

Wits & Wagers Vegas brings the excitement of Vegas into your home! It’s like a trivia game, but you don’t need to know the answers to win! That’s the fun! Anyone can win by betting on other players’ guesses. Take chances, press your luck, and become a Vegas high-roller! 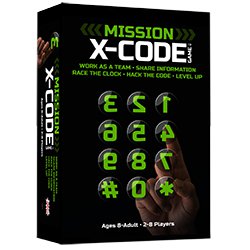 The world’s computer networks are down and it’s up to your team to bring them back–but you only have 3 minutes! Work together to crack the code before time runs out, and then level up through 10 secret missions that keep getting harder. 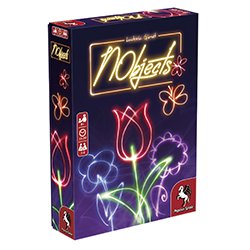 NObjects is a neat little drawing game, but here’s the trick: you do not need pen or paper for it! You simply use your finger to draw invisible lines on the table, the wall or any other smooth surface. A card lets you know what you have to draw. The other players observe your movements and have to guess the answer. You’ll be amazed what people can see in your invisible drawings – no artistic talent needed!

ASK FOR IT AT YOUR FAVORITE LOCAL GAME STORE! 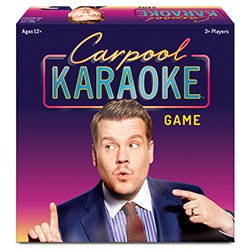 Got moves like Jagger? Can you sing like Ariana? Find out in the Carpool Karaoke Game! Using your favorite music app or streaming service, select a song and then duel other players in song, dance moves, or celebrity trivia for points. You may even be challenged to post your performance on social media! Do you have what it takes to ride shotgun with James? Carpool Karaoke is the hilarious game where your friends and family will discover their inner diva, display their disco dance moves, and celebrate each other’s Carpool Karaoke mastery! 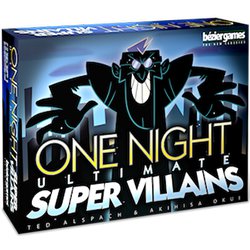 Players take on the roles of heroes and villains, each with amazing superpowers. The vile trio of Rapscallion, Temptress, and Dr. Peeker are intent on getting away with their crimes. Meanwhile, the many Superheroes are all out to stop them!

ONU Super Villains is based on the best selling One Night Ultimate Werewolf series, but with a totally different feel and unique set of roles; the most family friendly of the series for sure! 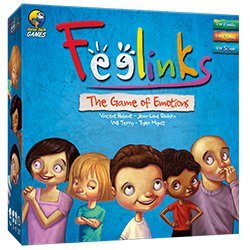 Feelinks is a family friendly game of emotions and empathy from the designer of Dixit. Game play is as simple as picking how you feel about a given situation and guessing how someone else feels about that same situation. 3-8 players 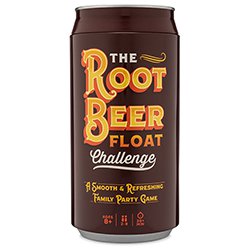 The tasty new game has players complete a series of solo, head-to-head and cooperative challenges using the ingredients of a Root Beer Float. The game gets people moving and active. Partially inspired by popular social media challenges that have gone viral. The theme of the Root Beer Float gives us elements for obscure challenges with silly staged components. Complete the challenges and earn a card for each ingredient and win the game. 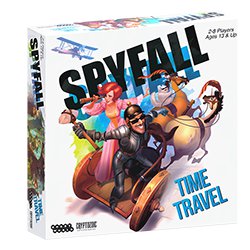 In this latest social deduction card game in the popular Spyfall series, 2-8 players take on roles in memorable locations from history, as well as some futuristic locations. In the intense timed rounds, the non-spy players ask questions and give answers to deduce which one of them is the spy without giving away the location, while the spy player tries to figure out the location before his or her identity is revealed. 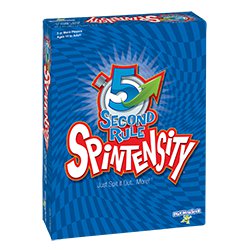 Like the popular 5 Second Rule, players have to name 3 things in a category, but now the time is random and you may have to do more! Every time you finish naming three things, spin the spinner to see what to do next: name more things in that category, pick another card or pass to the next player. Just keep going because when the timer stops, if it’s on your turn, your chance to score points is done! For 3 more players. 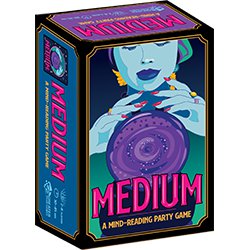 In the game Medium, players act as psychic mediums, harnessing their powerful extra-sensory abilities to access other player’s thoughts. Together in pairs, they mentally determine the Medium: the word that connects the words on their two cards, and then attempt to say the same word at the same time! It’s the perfect game to play with friends, family or co-workers! 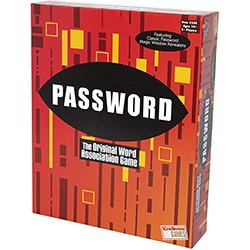 Endless Games brings a classic TV Game Show into homes with its new Password board game. Password, one of the top TV game shows of all time, is a challenge of word association where teams of players attempt to convey mystery words to each other using only single-word clues. 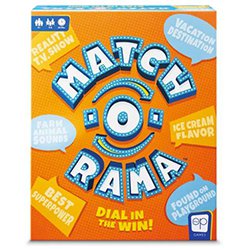 In this press-your-luck party game, test how well you can predict what others will say at the table! Get points for matching answers that fall within a specific range of people-whoever gets the highest score wins! 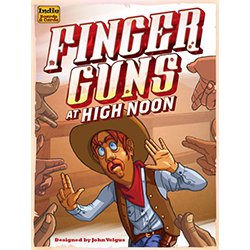 Finger Guns at High Noon is a fast-paced game of strategy, negotiation, and pure hilarity—battle royale style. Craft your plan, convince the crowd to join in, then count down and draw your finger guns. Hand gestures show everyone’s actions and targets. Eliminate players with pistols, dynamite, and power shots, or stand to the side and lasso up an ally. Last player standing is the winner—unless the ghosts eliminate everyone. Do you have the fastest draw in the west? Time to put your moxie to the test in Finger Guns at High Noon!

We Need to Talk

Players take turns staging interventions about ridiculous problems – and must guess their issue from three rounds of oblique clues: Broaching the Subject, The Emotional Appeal and finally, Suggesting a Solution. THE INTERVENED gets more points for guessing correctly, sooner than later, while CONCERNED FRIENDS (everyone else) gain points for giving “good” clues, but not so good that they give it away and lose their points. 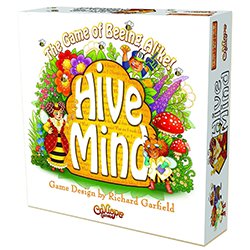 Up in a hive in that tree over yonder,
The Queen Bee has a decision to ponder.
Winter is coming, and the hive is congested
To decide who can stay, all bees will be tested!
The Queen shall ask questions, and then she will see
Which of her bees answer most identically.
Those who match answers, with thinking aligned
Will prove they can stay within the Hive Mind™!

If you’re looking for a particular type of game and we haven’t nailed it yet with one of our current holiday gift guides, stay tuned for more to come. Keep watch for more ideas including 2-player games, household and electronics, gifts for young kids and even stocking stuffers. Oh, and we’ll even have another whole list of family games! Stay tuned! 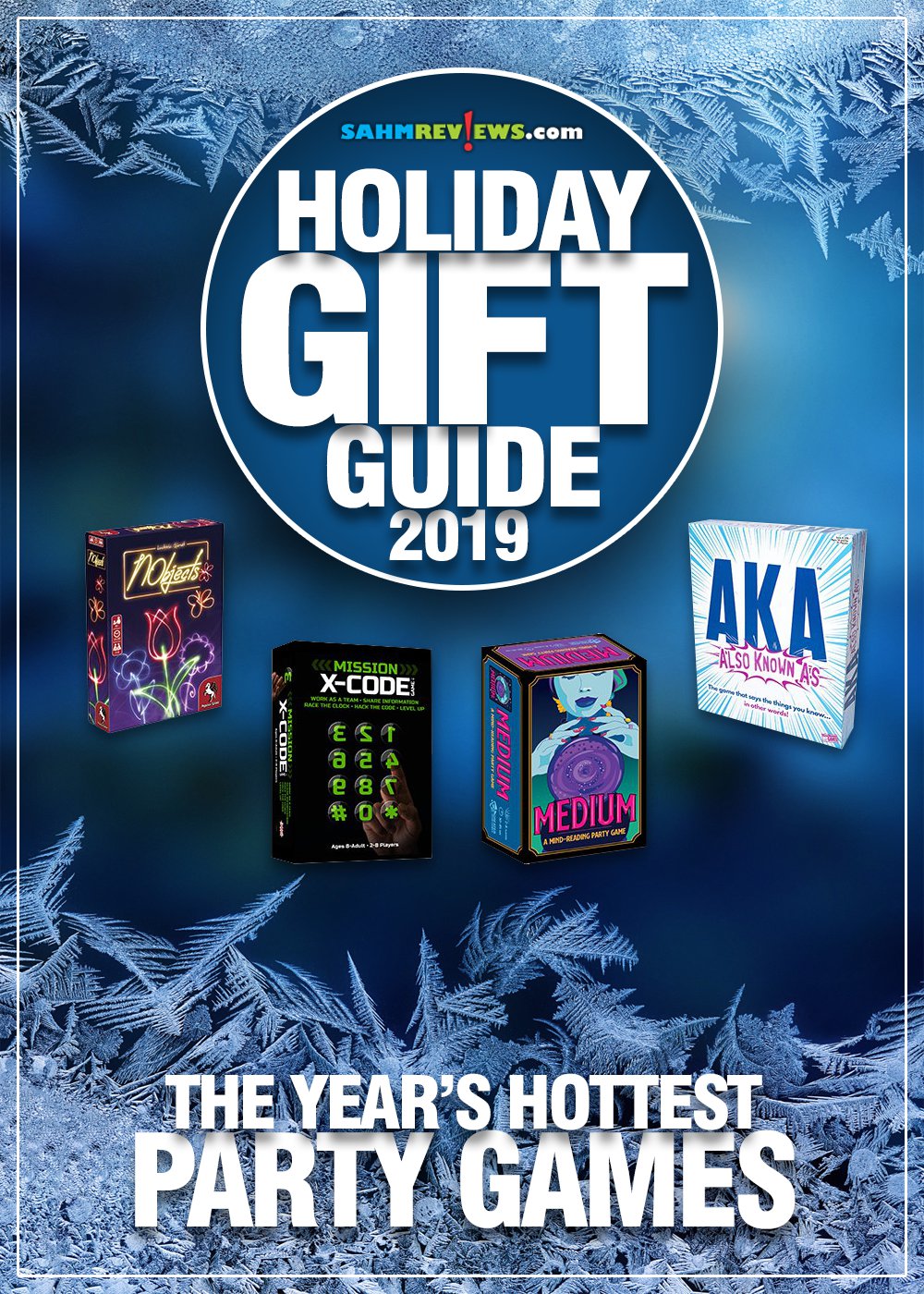