29+ years. That’s how long I’ve known Scott. We’ve been through thick and thin, worked together, moved a couple of times, raised a family and shared thoughts and dreams with each other. You could say that we know what one another is feeling or thinking at any given time.

Well, almost any given time.

Over Christmas break, I discovered that we aren’t as in-tune as I thought we were. It’s more like we are really good at overthinking what the other IS thinking. At least when it comes to playing Greater Than Games‘ Medium party game that’s the case. The goal of the game is to earn tokens for reading the mind of your two teammates. Note to self: Don’t sit next to Scott when playing Medium. 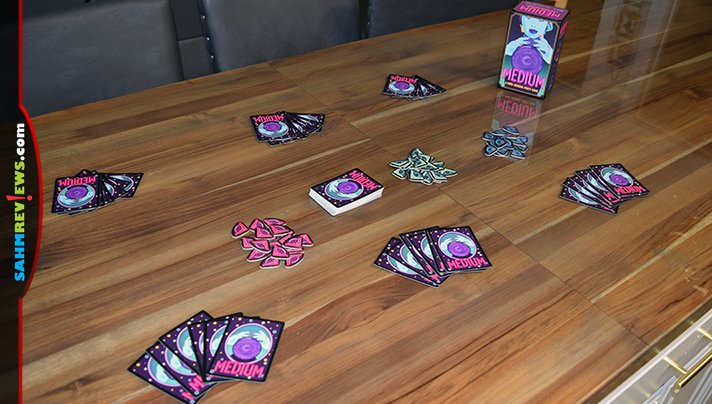 I bet I can read your mind now. You want to know more about the game! Medium party game is designed to allow you to play multiple times without duplication. There are 18 sets of word cards but only a handful are used each time. You’ll use the equivalent of one less than the number of participants. In a 4-player game, you’ll randomly select three of the sets. In a 5-player game, four sets are used. Once you’ve selected the sets, shuffle them all together into a single deck. Separate it into thirds, then shuffle three Crystal Ball cards into that stack. Place the other two-thirds of the cards on top of this newly shuffled Crystal Ball-laced deck. I’ll explain the Crystal Ball cards in more detail when the time is right. Deal each player six cards face-down to form their hand and place the remainder of the cards in the center of the table within reach of all players. Form general supply piles of the three levels of Mind Meld tokens with the values hidden. Now it’s time to get in sync with your teammates. 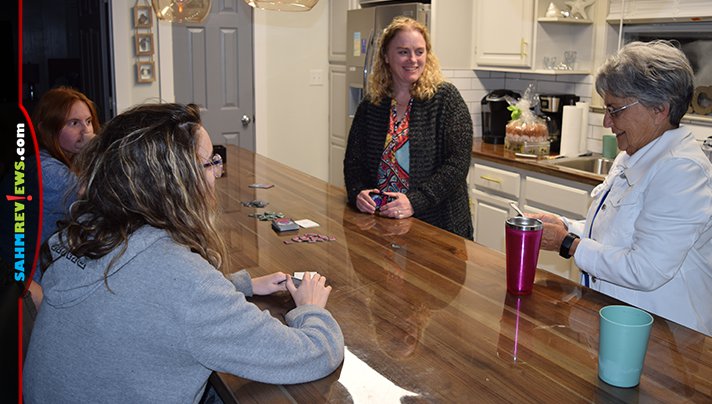 The object of the game is to connect with your teammates in order to score points. You have one teammate directly next to you on your right and one to your immediate left. But you aren’t a team of three! You are on two separate teams with each of those people! You’ll have two opportunities to score – one when it’s your turn and you’re working with your partner on the left and a second when it’s the turn of the person on your right. While you are partners, it does make a difference whose turn it actually is.

On your turn, the player to your left will review the cards in their hand and select one they think you’ll be able to work together on. Your teammate will place that card on the table between you. Simple enough, right? 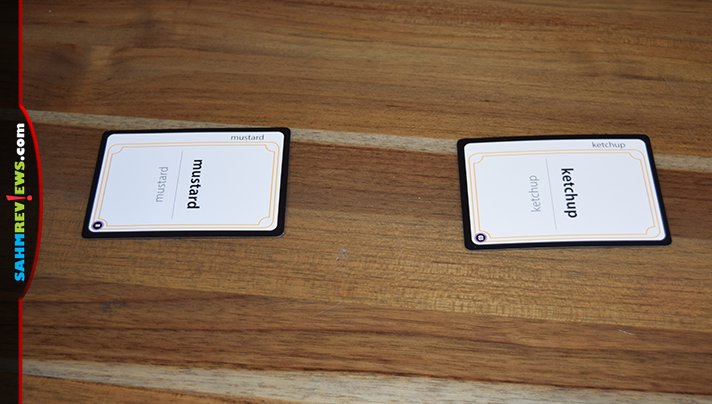 Now it’s your turn to choose a card from your hand. Here is where things get tricky. After you’ve placed a card, both you and your teammate look over the cards and survey each other in an attempt to figure out the one word that you both think connects those two words. When both of you are ready, simultaneously count backwards, “Three, two, one…” then each of you say the word you are thinking. 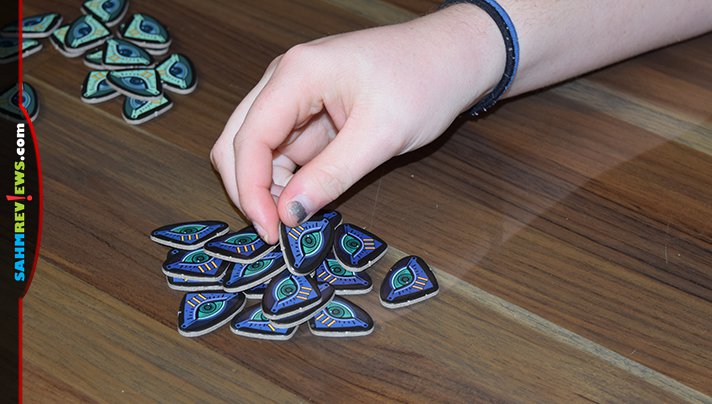 If you match immediately, you’ll take one of the First Attempt Mind Meld tokens which have a value of 5 or 6 points. You’ll place that tile between the two of you in your own team scoring pool. Here’s where things get interesting. If you didn’t say the same word as the other, then you don’t match (duh), but you’ll get a second chance. Now, instead of using the two words on the cards, you’ll need to mind meld to figure out the new common word. However, you cannot say either of the words that were on the cards! “Three, two, one…” and give your guess. If you succeed this time, you’ll take a Second Attempt token that will be valued at 3 or 4 points.) Missed the connection? You can have a third attempt using the two new words while avoiding any of the prior words already addressed. Of course, if you make that one then you’ll get the consolation prize (Third Attempt) token that will score you 1 or 2 points. Another fail and you shake your head in disbelief or grumble under your breath that you couldn’t believe you missed again then play passes to the next person.

So here’s where I admit that Scott and I managed to constantly overthink what the words were. We simply were never in sync with what the other might be thinking. I literally spent the entire game under the impression he was simply screwing with me.

Remember the Crystal Ball cards I mentioned earlier? They are essentially a built-in timer. The game continues until you’ve revealed three of those from the deck. You’ll continue the round until all players have been the active player an equal number of times then you tally up the scoring tokens to see which team won. When you’re done with the game, be sure to sort the cards back into their respective piles to make it easier to be up and running the next time with a fresh selection of cards.

Medium has consistently sold out at conventions since it was released last year. We didn’t expect you to read our minds, so we made sure to mention Medium as a great gift idea in our holiday list of party games. If you didn’t make the connection with the game before the holidays, order a copy of Medium on Amazon, get it direct from Greater Than Games or look for a copy at your local retailer. Keep watch for Greater Than Games’ news on their Twitter and Facebook channels.

How good are you at finishing other people’s sentences?