As I read over Scott’s Filler game overview last week, I came to the realization that a lot of game-related vocabulary has crept into our everyday conversation. In addition, we tend to reference game-related terms when writing articles. Without going into too much detail, it allows the games speak for themselves. Most of the game types are self-explanatory when you think about it. Gateway games are introductions to the hobby. Cooperative games are games that require you to work with other players in order to win. Roll and write games are ones where you roll dice then record the answers. As we teach kids to play games, it doesn’t hurt for them to learn to identify game mechanics because it will help them advance to more difficult games as they hone their skills. IELLO recently introduced a new imprint, LOKI (games, not the Marvel character), as a way to teach a variety of game mechanics in non-intimidating ways. We’ll showcase three different styles to show you what they have to offer.

If the cute dinosaur figures aren’t enough to lure you to this game, perhaps the idea of cooperating with everyone else in order to win will be the draw. The goal of SOS Dino is to save as many dinosaurs and eggs as possible before lava takes over the land. Targeted at ages 7+, you can play this tile-laying game using the solo rules or cooperative mode with three other people. 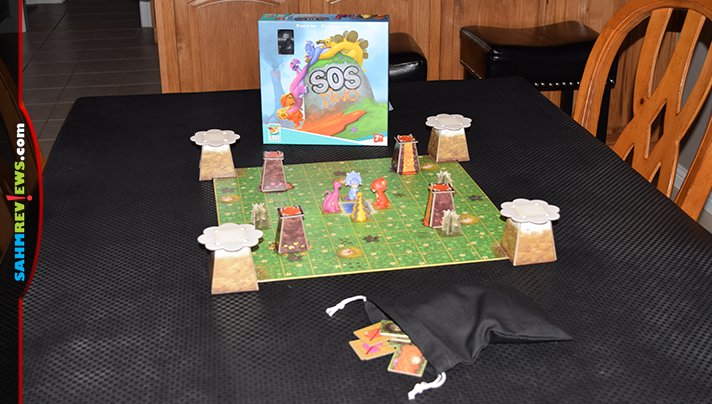 Begin by assembling the volcanoes and mountains. You’ll place the mountains on the corners of the board and the volcanoes on top of their respective tile which is then placed on its designated color. Place all remaining tiles in the bag then add eggs, rocks and dinosaurs to the board as marked. You’re ready to go. 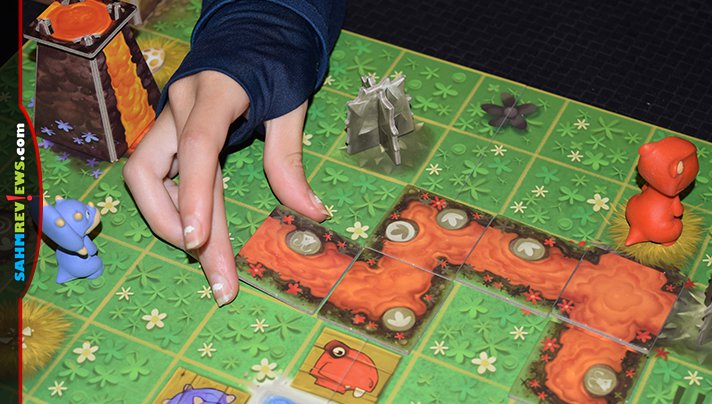 Each turn involves a few steps. You’ll randomly draw a tile from the game and place it in the area matching the flower color. The main requirement is to extend the lava flow. Some of the tiles are asteroids and you’ll add those to the board as marked. Once you’ve added the tile to the gameboard, take the action on the tile. 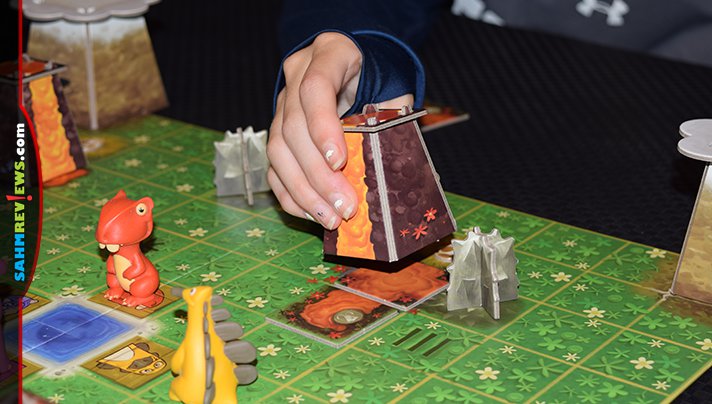 Sometimes you have to draw another volcano tile and other times you’ll be allowed to move the dinosaurs either one or two spaces. If lava flows over a dinosaur or egg, it’s removed from the board. If the lava from a particular volcano runs out of places to flow, the volcano explodes and causes lava to flow in more directions! 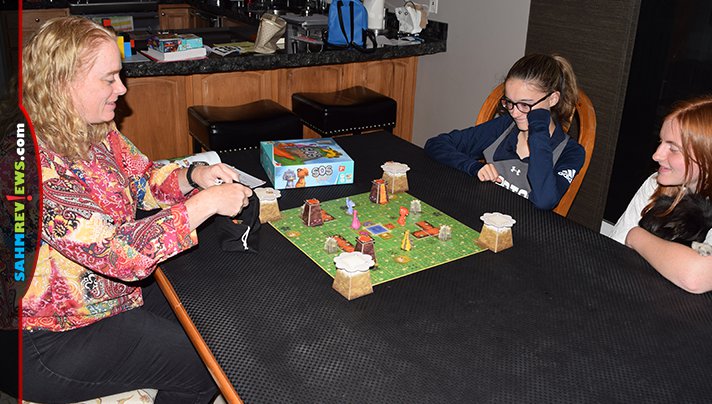 At any point, if you successfully make it to an egg, you can move it safely to the top of a mountain. Dinosaurs can climb mountains to safety as well, but once there they aren’t allowed to return to the board. The game is over when the last Dino has climbed a mountain, the last Dino has been eliminated by lava or when there are no more Danger tiles in the bag. You’ll earn two points for each Dino on a mountain and one point for each egg that was rescued. While most cooperative games are either win or lose, SOS Dino gives a rating based on how many points the team received. It’s a great way to learn the concepts of cooperative and tile laying games without any hurt feelings!

Designed for four players ages 5 and up, Farmini is another example of a tile-laying game. In this one, you’re drafting tiles from a central pool and placing it into your individual farm. Unlike SOS Dino, this one isn’t cooperative! The goal is to fence in corn while also securing animals. 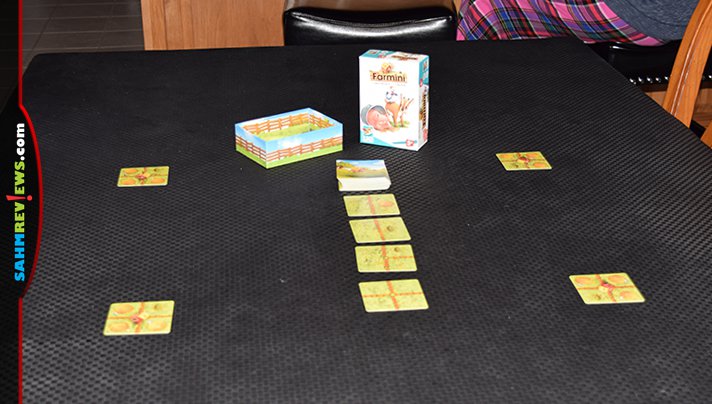 To set up the game, each player takes a farm, the four starting field tiles are placed in a row in the center of the table and the remaining tiles are shuffled to form a draw pile. Animal tokens are placed in the pen within reach of all players. 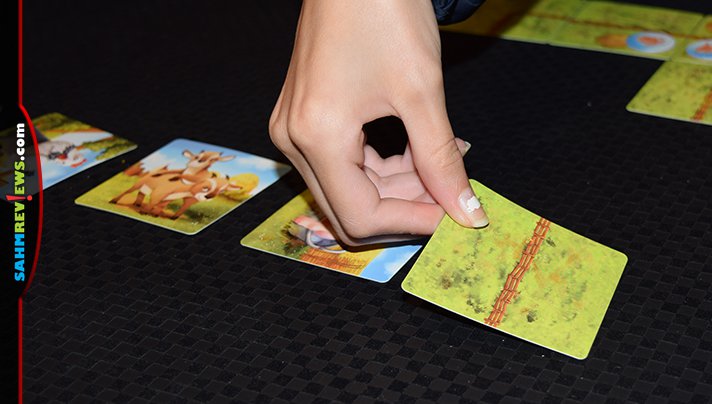 On your turn, you’ll draft one of the four available field or animal tiles and add it to your current property. Animals are placed in their designated area within your farm while fields and grassland tiles are connected orthogonally to an existing piece. 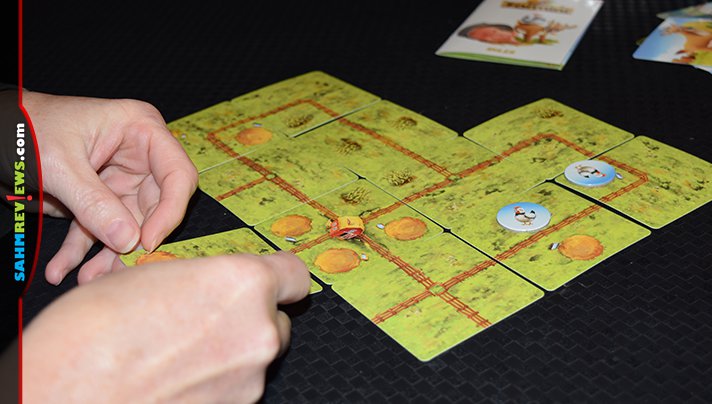 Fences connect with fences and pastures connect with pastures. At the end of your turn, you’ll refill the row to ensure there are four choices available for the next player. If a wolf tile is revealed, any animals of that type that are not within a fenced-off area are scared away so it’s important to make sure you have a plan for laying out your property. 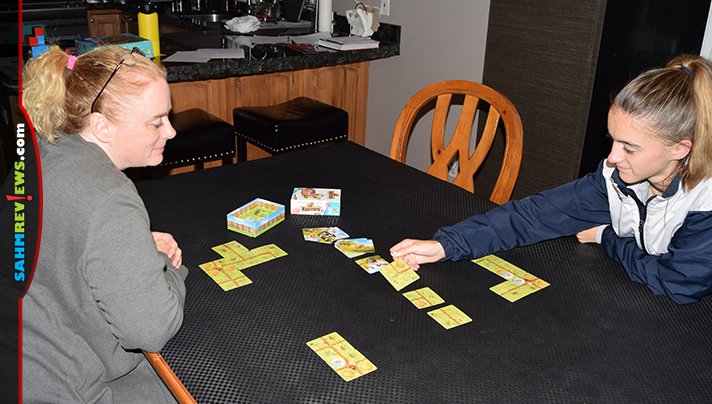 After all tiles have been drafted, the game ends and scoring takes place. Players score one point for each animal on their farm along with one point for each corn that is within a fenced area. Corn outside the fenced area doesn’t earn points nor does corn that shares a fenced space with animals. (Animals eat the corn!) The player with the most victory points wins the game.

We’ve talked about press your luck games several times and the concept is pretty self-explanatory. But as I mentioned before, LOKI focuses on teaching these concepts to young gamers. Troll & Dragon uses dice to simulate the randomness of hunting for treasures! 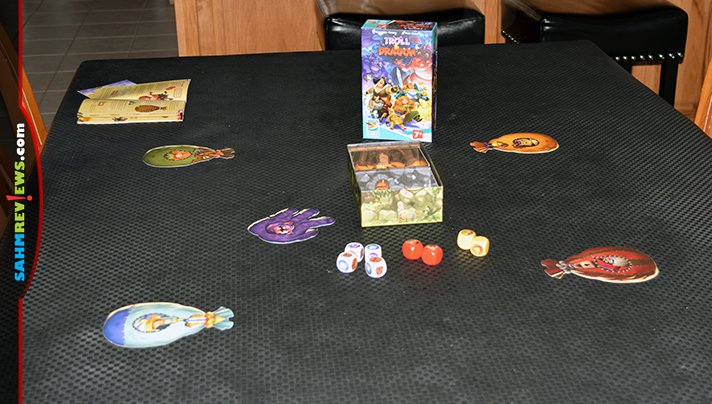 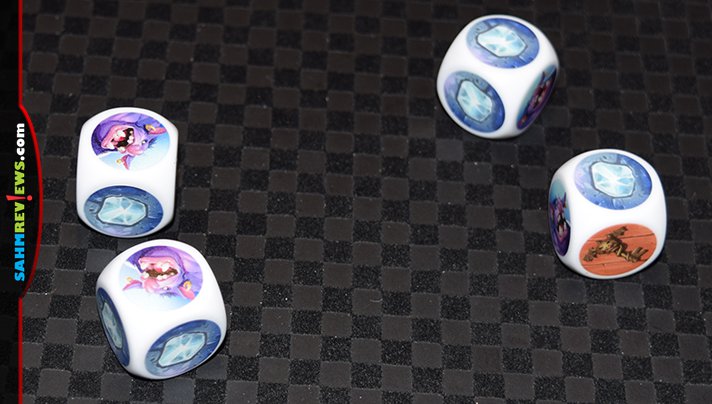 The goal is to collect and secure as much treasure as possible. On your turn, you’ll roll the Diamond Grotto dice and collect a diamond for each die result that shows one. If you roll a troll, it’s locked. A lock and/or key result can be saved in attempt to get another. You may push your luck and reroll any non-troll (or non-saved lock/key) in an attempt to attain more diamonds. 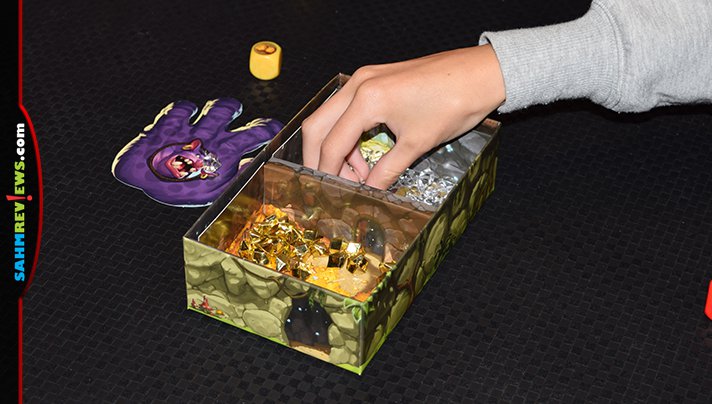 For each diamond that you roll, you’ll take one from the Diamond Grotto half of the treasure box. You’ll continue to do this until you either have four locked dice or decide to end your turn. If the dice are all locked, that indicates the troll has come to take all your unsecured diamonds! 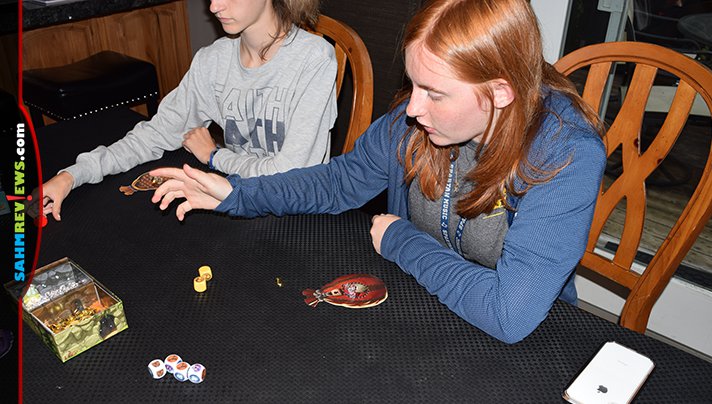 If you manage to collect a lock and a key then a new door magically appears that allows you to venture into the Treasure Cavern. Once there, you’ll use the gold dice to roll as many gold as possible until one of two things happens. You either decide to end your turn and secure your fortunes or the dragon comes and scares you (and the troll) away. The dragon is controlled by your opponents who will be taking turns rolling the red dragon dice as fast as possible. If they roll and lock two dragons before you exit safely, you – and the troll – will drop all your unsecured goods. Your opponents will reap the benefit of that fate by sharing all the loot! The game is over when either the diamonds or gold have run out. Diamonds saved are valued at 1 point each while gold is worth 3. The person with the most points wins!

There are a couple things worth noting about games from LOKI. First, they’re very simple with an intent to teach game mechanics in a basic way. Second, they keep components to a minimum by using the bottom half of the box in some fashion. We’ll continue to share details about additional LOKI games that we try out. In the meantime, you can pick up copies of SOS Dino, Farmini and Troll & Dragon on Amazon. Dig up treasurers on IELLO’s Facebook and Twitter feeds or stop by their website for more information on the LOKI collection. If you think you’re ready to introduce these games to your game night, here’s your chance to add all three titles to your collection! Entering is easy using the form below.