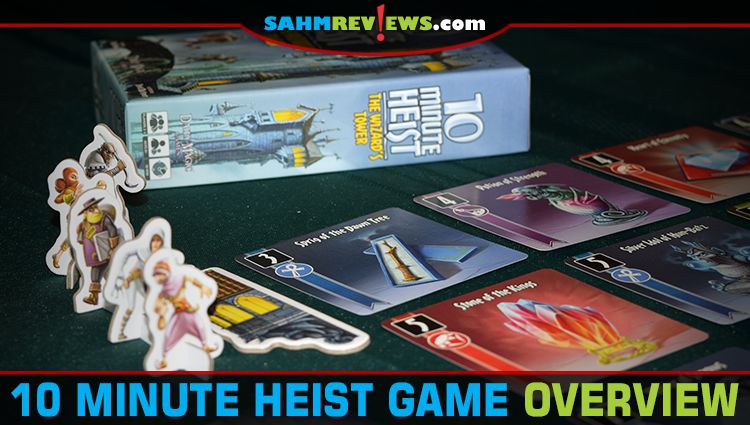 As of late we’ve been playing a lot of longer, more strategic games. They’ve run the gamut in theme and mechanics. From cooperative games like Pandemic: Fall of Rome to brain-burners like Lisboa, it isn’t unusual to see us spending 2-3 hours at a table playing just one game. Yeah, we’re nuts.

Just because we love games that make you formulate a strategy a couple turns in advance doesn’t mean we’re stuck with playing for multiple hours any time we want to play. There are plenty of short games that are more than just matching, trick-taking or dice rolling. Take for example the new 10 Minute Heist: The Wizard’s Tower by Daily Magic Games. As advertised, 2-5 players can play a complete game in around ten minutes! And you still have to plan ahead (and have a backup plan) for every turn! 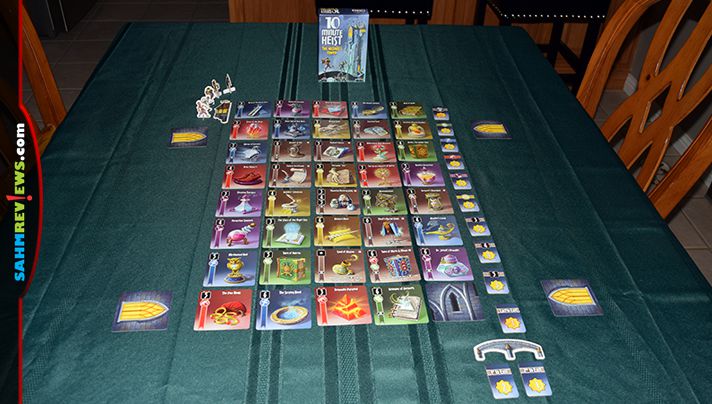 In 10 Minute Heist: The Wizard’s Tower, everyone is a thief pillaging the wise wizard Alazar’s tower while they are on a quest to vanquish a foe. The tower is full of magical objects and treasures, and you want to get away with as many as you can to prove you are the best thief in the land. Unfortunately, that’s what the other thieves are trying to do also! 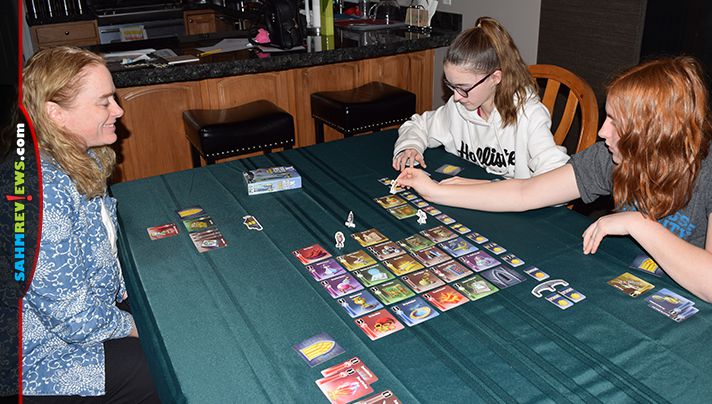 10 Minute Heist: The Wizard’s Tower doesn’t have a board like traditional board games. Instead, your play area is created by randomly dealing cards into a 5-wide by 8-high grid that represents the floors of the tower. At the top is a balcony which you and the other thieves have climbed onto in order to enter the tower on the top floor. Each player is dealt one leftover card, which they keep face down in front of them until the end of the game. Alongside the tower are a number of Scoring tiles to remind you of your goals and objectives during your run. 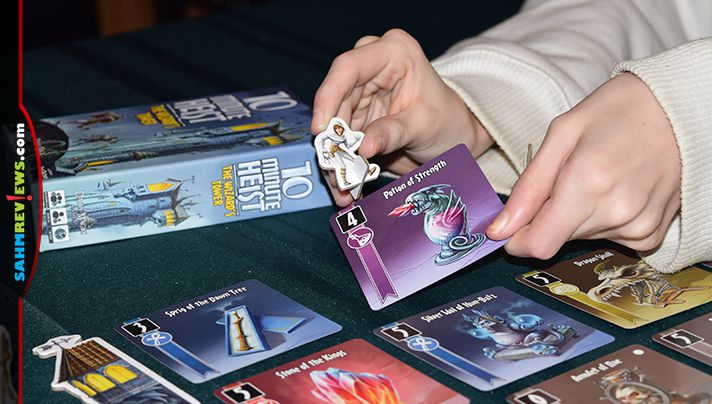 On your first turn you will take one card from either the floor you are on or one from the floor directly beneath you. Afterwards you can move down as many floors as you like if you want to jump ahead of your opponents. Take the card, place it face up in front of you and move your cardboard pawn into the empty space. Each card has a value printed in the upper left corner along with a suit. Some cards have special powers printed at the bottom and others may represent cursed items.

After selecting your card and resolving any power printed upon it, the next player in order does the same thing, taking an available card and moving their pawn. Instead of taking a card, you may elect to exit the tower at the bottom no matter which floor you are on. Doing so ends the game for you (you may not reenter the tower), but allows you to grab an Exit token (if available) that is worth points at the end of the game. The last person to exit the tower grabs the final Exit token, which subtracts points. Don’t hang around the tower too long!

Players take turns grabbing cards, moving down floors and finally exiting the tower. Final scores are tallied by resolving each of the Scoring tiles one at a time. Some award points for certain Treasure suits, some for certain valued cards and others for curses. If anyone ties for a tile, it is not awarded at all and is turned face-down! When all Scoring tiles have been awarded, add up their point totals with any points awarded on collected cards (a few give you points at the end of the game) and the player with the highest total wins 10 Minute Heist: The Wizard’s Tower! 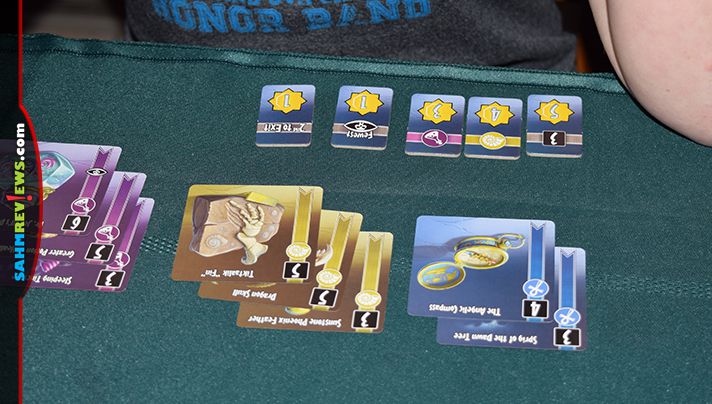 As you can see, a game of 10 Minute Heist: The Wizard’s Tower is very quick, but still requires you to plan your turn ahead of time. You’ll want to focus on certain Scoring tiles and make sure you have the most (and not tied). Every player’s cards are face-up, so you can also see what they’re after. The kicker is the one face-down card everyone received at the game start – you don’t know what theirs is and it may throw a wrench in your plans!

This super-quick game can be found at your local game store or on Amazon for under $20. Take a look at Daily Magic Games’ website where I’m sure you’ll recognize a number of other titles, many of which may already be in your collection. If you follow them on Facebook and Twitter, you’ll be the first to grab details about their brand new Kickstarter campaign that just began a couple days ago for three unique products!

Would you grab as much treasure as you could? Or would you want to be the first out safely?