We’ve always touted the educational opportunities available by playing games. It doesn’t matter if you just want to learn something new, play a game where you can talk about how it relates to history or even using a game in a “gameschooling” curriculum – there’s always bits of knowledge that can be picked up.

Case in point – history. It was far from my strongest subject in school, and now when a historical category comes up on trivia night I have little chance of contributing anything positive. I don’t blame the school system, I had great teachers. Including one who dressed up in period costumes from the Revolutionary War and even fired a musket in the classroom! (Try pulling that off today…) I just wasn’t into learning about the past when I was looking forward to the future. Today I feel differently and am excited to learn all about history in any manner I can. Bonus points for learning through playing games!

We have been recently enjoying a historical-themed board game by Eagle-Gryphon Games called Lisboa. I first encountered it at the annual Origins Game Fair in 2017 when I stood off to the side of Eagle-Gryphon Games’ booth while watching the game’s designer, Vital Lacerda, teach it to a handful of players who had purchased event tickets for this rare opportunity. I didn’t stick around for the entire presentation, but what I did catch is that the game of Lisboa is based upon the real-life happenings in Lisbon, the area of the world from which Mr. Larcerda hailed. 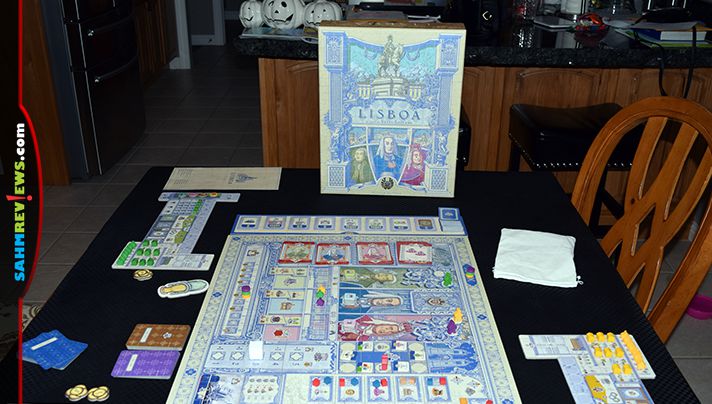 in the mid 1700’s, Lisbon was one of the largest cities in Europe. While Lisbon was no stranger to earthquakes, they experienced a catastrophic (estimated 8.5 – 9.0 on today’s scale) one on All Saints Day in 1755 that is now known as the Great Lisbon earthquake. Somewhere between 10,000 and 100,000 people were killed and it is reported the earthquake lasted as long as six minutes and opened 16′ fissures in the middle of the city!

Approximately 40 minutes later a tsunami hit the harbor and downtown area, an aftereffect of the earthquake. Homes had lit candles for All Saints Day, and due to the violent shaking, the candles toppled, setting the residences on fire. There were so many flames that a firestorm was created and asphyxiated people up to 100 feet away from the fire. Lisbon was all but destroyed by this triple tragedy.

It took almost a full year to clear the city of debris, making way for big squares, large avenues and widened streets. The game of Lisboa is about this rebuilding process over the subsequent 22 years. You and up to three other players will be rebuilding the stores and markets. At the same time you must gain favor with the correct Nobles so your building plans will be approved. And as with any construction process, spaces are limited. You’ll rush to get to the best spots, earning the highest rewards!

Lisboa is one of those games that will give pause if you are watching others play. The huge layout of the main board and player boards in a monotone art style causes Lisboa to look more confusing than it really is. As I heard Mr. Lacerda explain on more than one occasion, all you do is choose a card from your hand and play it, then draw a new one. As you’ll soon see, this is an overly-simplified explanation of the game, since where you play your card is as important as which card you play. 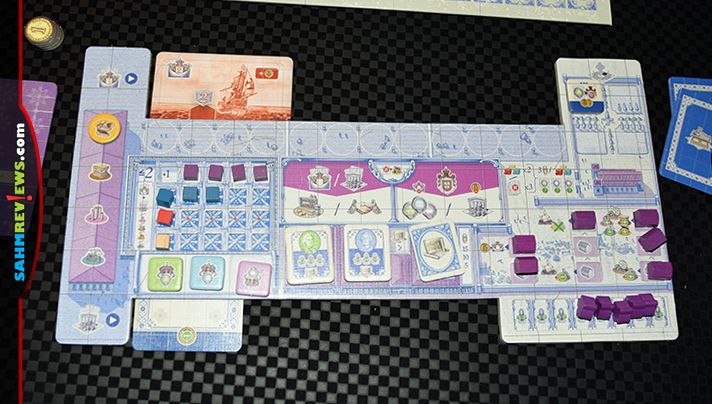 When you play a card from your hand, you may take one of four actions with it. In front of you is your personal player board, also called your “Portfolio”. At the beginning of the game you may only have two cards stored in your portfolio and you can increase this limit as the game progresses. The first two possible actions you may take with your card both involve placing it into your portfolio. The type of card you possess will dictate where it can be played. A Noble Card (depicting one of the three Nobles) is slid under the top portion of your portfolio. You immediately receive the reward (or pay the penalty) shown on the end of the card being hidden under your board. Then you can either sell collected goods or “Trade with the Nobles”. This last option allows you to offer one or two goods to the Nobles to perform one of their six State actions shown on the left side of the board. 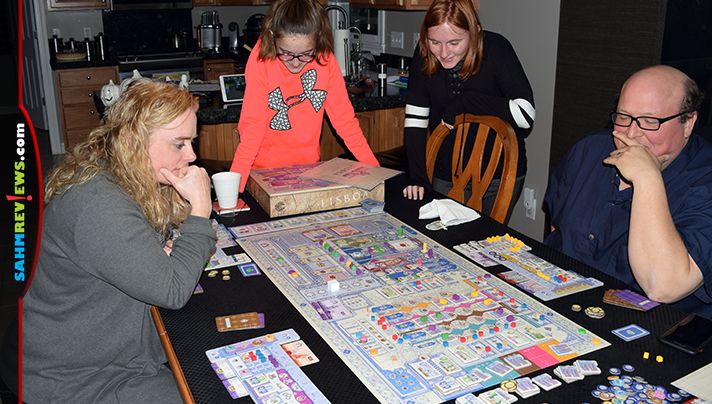 If you play a Treasury Card, it goes under the bottom of your portfolio, this time rewarding you with money equal to the level at the Royal Treasury (a sliding value in the center of the board). Again, you then must either sell collected goods or spend one or two by taking a “Trade with the Nobles” action. 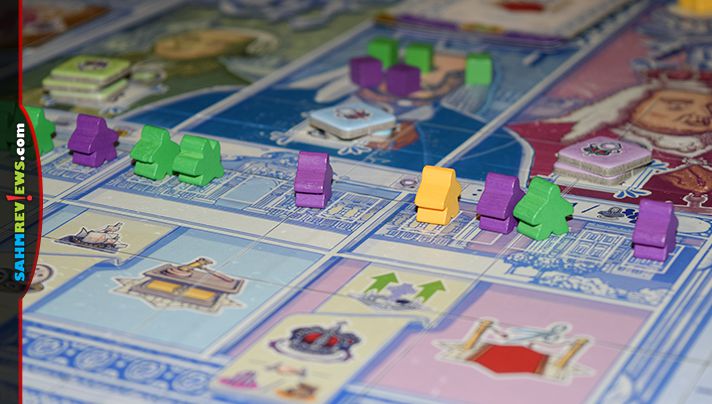 There is also another important thing to work on before you transact with the Nobles, and that is Influence. Each player tracks their influence on the main board and spends points when necessary. Not only do you have to worry about money management to pay for building construction, you also need to have influence with the Nobles so they’ll let you carry out your plans! 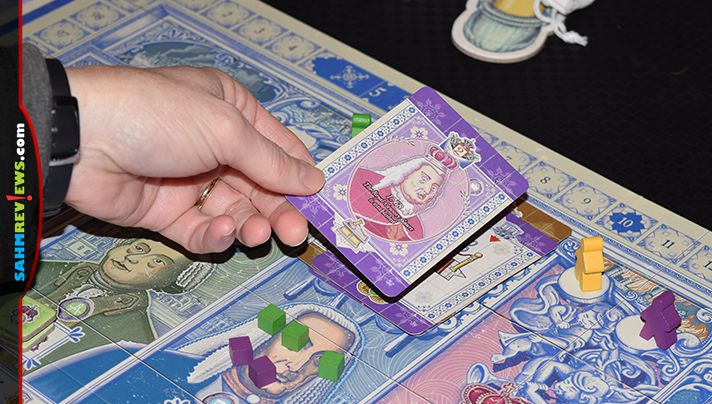 The third way to play your card is to use a Noble Card and visit their office’s directly. Play the matching Noble Card of the Noble you wish to visit and then you may optionally perform one of their State Actions listed after paying Influence (this amount will vary depending upon how many of your opponent’s officials are in that Noble’s court. No other fee is required. Then you must also take the Noble Action, and is probably the reason you visited him in the first place.

These State and Noble actions allow you to Meet the Cardinal (awarding you with tile bonuses), gain Influence, earn Royal Favors (more on this in a second), produce goods, acquire plans, build stores or public buildings, recruit state officials, or even build ships! So many options to take, and this was just your third available choice! 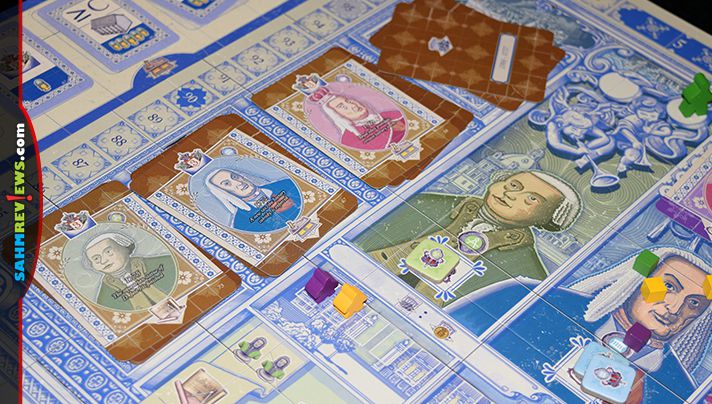 Lastly, you can play a Treasure Card to “Sponsor an Event”. This is the simplest of the four actions, requiring you to only pay a fee equal to the current Treasury value and perform the action listed in the center of the card. After you finish your action, whichever you choose, you will draw a new card from the top of one of the four decks. 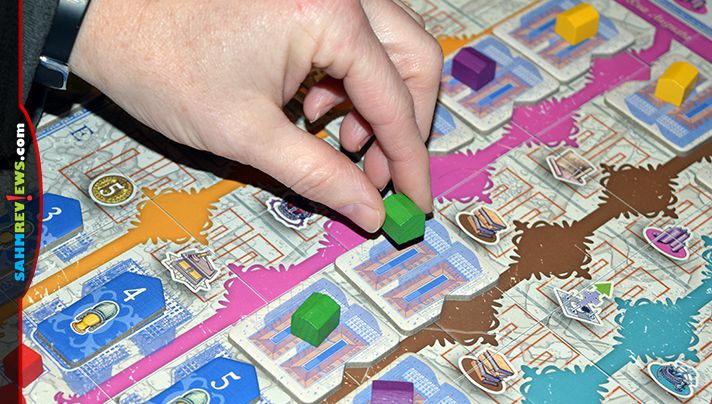 Rebuilding Lisbon is what the game of Lisboa is about, and not surprisingly where you will earn most of your points. There are two types you may construct, stores and public buildings. If you build a store, you will own it and place one of your houses on the tile. You may build on any empty parcel of land as long as you can pay the fee to clean up the rubble. One piece of rubble will be placed in your portfolio, eventually unlocking additional space when you collect a complete set of different rubble. You will receive the bonus printed on the land space immediately as well as victory points (wigs) for constructing them along streets with matching public buildings. 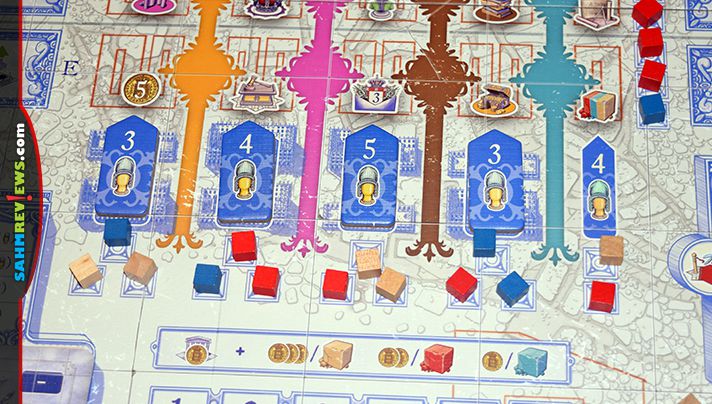 Public buildings aren’t owned by anyone and help set up the scoring for the game. The original reconstruction in Lisbon dictated that streets would have complimentary stores so patrons wouldn’t have to travel far between them. In Lisboa you want to take note of the public buildings when building a store to make sure they match (and score points), and if erecting a public building after the fact, planning ahead so only you benefit from the building’s location and your opponents do not.

Lisboa is played over two complete rounds, with each round ending after two rubble sets are completed by one person (four for the second round) or 3 of the 4 decks of cards are depleted. Additional points (over and above the points you received for constructing buildings) are awarded for the size of the ships in your portfolio, for completed sets of rubble cubes, for having “area control” of stores of a particular type, bonuses for end-of-game decree cards award to you by the Cardinal and for cashing out any remaining Influence. The player with the highest overall total wins Lisboa!

Before you say anything, yes, there is a lot going on in this game. And the design of the board may make it seem more confusing than it really is. We LOVE the artwork and once you understand how the game is played, the design feels much more intuitive (except for the area-control part, that could have been illustrated a bit better). You’ll often hear people talk about strategy games as “light, medium or heavy”, meaning how difficult they are or how much “brain power” is needed to play. Lisboa definitely falls in the “heavy” category and will require you to think a few turns ahead while paying attention to what every opponent is doing at the same time. That being said, our early teens grasped the game very quickly (I would suggest quicker than the adults) and could easily be enjoyed by kids as young as 12 if an adult is around to teach the first game.

Every game collection needs at least one heavy title before it can be considered complete. Lisboa is a fantastic candidate for that slot and can be found on Amazon or direct from Eagle-Gryphon Games for under $100. Since it isn’t much more, spring for the Deluxe version that has upgraded pieces and then add on the metal coins! Be sure to follow Eagle-Gryphon Games on Facebook and Twitter to learn more about upcoming Kickstarter campaigns including one they’ve just completed for The City!

What is the most difficult game you’ve ever played?