Seeing so many board game bits and pieces scattered around the table can be overwhelming. I really enjoy strategy games like Lisboa, Lorenzo il Magnifico and Tapestry, even thought they take up the better portion of a large table. But it’s not uncommon for me to struggle with what to do next when there are so very many choices. It’s not-so-affectionately referred to as AP which stands for analysis paralysis. In some cases (like with Pipeline), it gets so difficult that I feel like throwing in the towel completely. When Scott suggested we play Dilluvia Project from Tasty Minstrel Games last weekend with our friends, I looked at the massive amount of components and thought, “Sure. Allocate a lot of extra time for me to figure out what I need to do each turn.” You may be surprised to hear that it wasn’t as chaotic as the board(s) would lead you to believe. 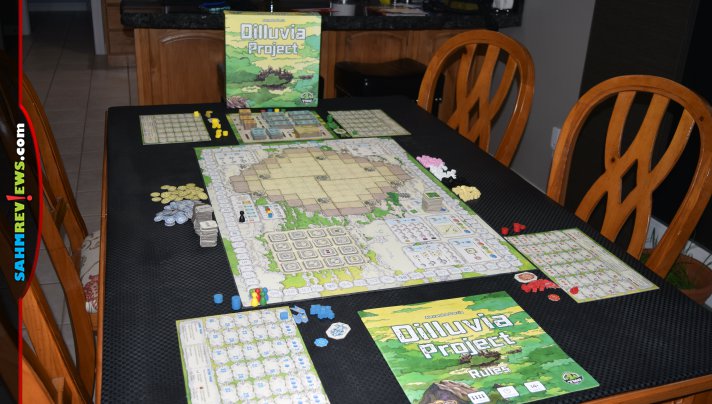 If you want to play Dilluvia Project, the first thing you need to do is make sure you have a table that fits it all. I know that sounds kind of obvious, but not only is there a large board (the same size as the Hues and Cues board), but each player also has their own individual mat with components AND there is a board to hold the buildings AND there are a bunch of market tiles, resources and money. Yes, it’s a handful and yes, I know that was a run-on sentence. It’s fitting though. To set up the game, you’ll have each player select a color then take the player mat and components to match. The main board is placed in the center of the table with the resources and all the other things I mentioned going nearby. One corner section of the board includes a market that will be filled throughout the game with market tiles. You’ll need to sort those tiles by player count and color. 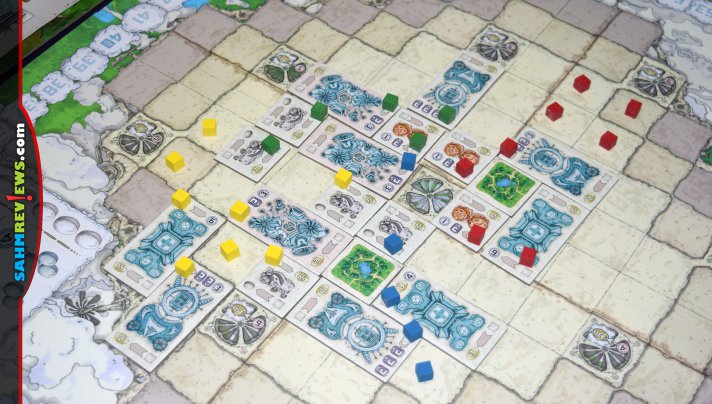 Dilluvia Project is based on the idea that the Earth is overpopulated and recent technology has made it possible for floating cities to be built with this being the first. You’re helping with the construction and management of the fans that keep it afloat with the ultimate goal of enticing people to come. Each round will consist of three phases: Market, Action and Income. You’ll take turns taking actions, with turn order possibly changing each round. At the end of the 7th round, the player with the most population points will be declared the winner. 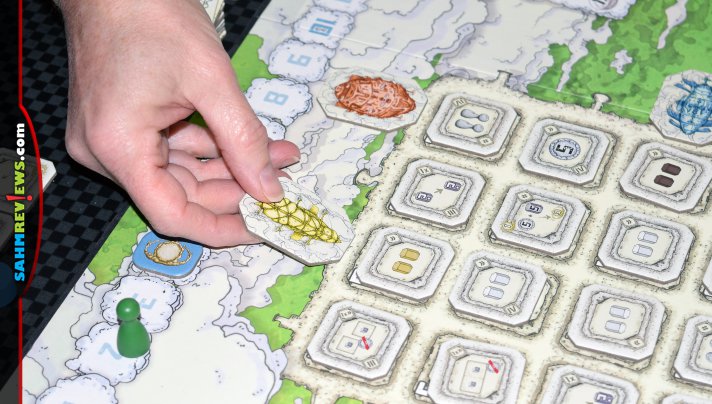 So let’s start by talking about the market. The player who is first in turn order for the round takes their zeppelin piece and places it alongside one of the rows. After all four players have docked their zeppelins, the first player will be able to select as many of the pieces in their row as they like as long as they can afford it. Unless a tile is specifically marked as costing five Aeros (that’s the currency), the tile in the first spot in front of the zeppelin costs one Aero, the second is two, the third is three and the fourth is four. These tiles offer resources, money, bonuses, end game points and more. Since there are multiple players and all the pathways cross, there’s the possibility that a tile you had hoped for is taken by a prior player. You’ll earn a consolation prize of a coin when that happens, but that hardly makes up for missing out on the tile. They’re essential to your game play so this is a time when going first is helpful. 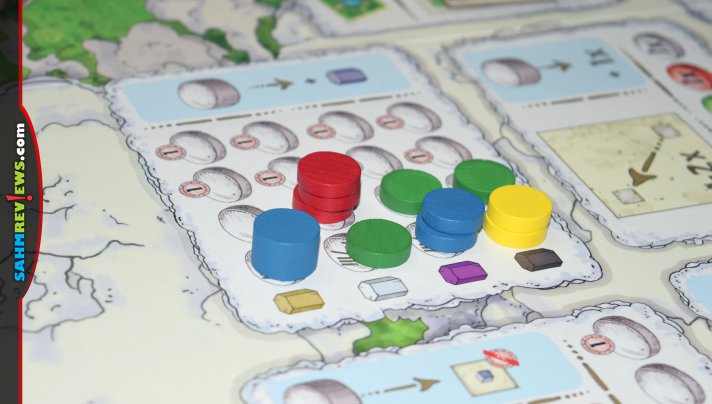 After all players have taken their turn at the market, it’s time to move on to the action phase. The board is filled with a variety of spaces that offer different action options. Like any worker placement game, there are limitations on where to go, what the costs are and their benefits. Each player has a designated number of worker discs as well as one special worker. Being the first to place a special worker disc may earn you a discount or bonus of some type. One of the things I like about Dilluvia Project is that you can place multiple discs on one space during your turn. Doing this means you’ll run out of discs sooner than your opponents who don’t use this tactic, but it also means you aren’t locked out of a specific space. 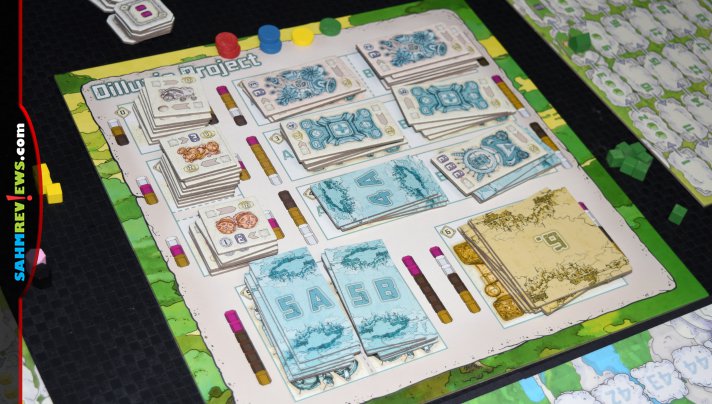 As I mentioned, the goal of the game is ultimately to construct buildings and draw residents to the city. You’ll need resources in order to purchase buildings, but there’s more to it than just that. You have to purchase the territories to build and that requires an action of its own along with the money to purchase the spaces. In addition, there are restrictions on which spaces you can purchase. It’s a multi-layered process that I was positive would make me feel encumbered, but it didn’t. The fact that we didn’t really get locked out of spaces made a huge difference.

When you’ve earned the resources and purchased the territory, you can make plans to build. Each tile provides two different options for the type of income you’ll earn at the end of the round. You may be able to gain another worker, resources, money or even prestige. Don’t worry about feeling locked in to something you only need temporarily. There’s a space on the board where you can place a worker and change your income preference. 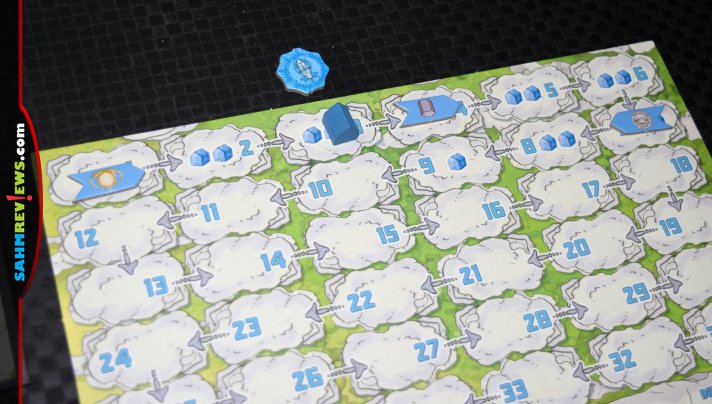 This is where your individual player mat comes into play. Using the markers, you’ll identify the income you’re supposed to receive. For each building, you’ll move up a building space. Each resource, prestige or income move you an entire space. During the income phase, you’ll earn income and resources. You’ll also move your prestige marker ahead on the point track. But prestige isn’t what will win the game, it’s population! That’s earned whenever your prestige marker passes a multiple of 10 on the track. Each time you do that, move your Population marker up the number of spaces equal to the space of your housing marker on your player mat.

In addition to fields that allow you to gain resources, purchase territories and construct building, there are spaces where you can purchase a leftover market tile, build gardens and fans, change income types or even change the player order. Fans and gardens are an added way to earn prestige which ultimately translates to more population. Between these extra ways to earn prestige and bonus tiles that give players unique ways to improve their status, the game didn’t feel like it was filled with perpetual player blockades and that made it a winner in my book.

If you enjoy strategy and worker placement games, this is one for the game shelf. Dilluvia Project is currently available on Amazon, but you can ask your local game store whether they have copies in stock. Follow Tasty Minstrel Games on Facebook and Twitter to learn about game updates, availability and new releases.

How often do you get AP when playing games?