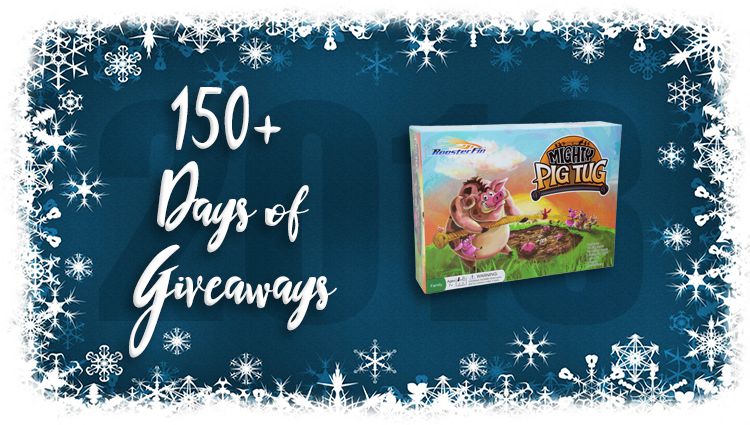 Living in Iowa for the majority of my life, I can honestly say that I’ve seen my fair share of pig-related activities. I’ve watched hogs being shown at the fair, cheered on piglets racing around a track, participated in the time-honored entertainment of trying to catch a greased pig, had a neighbor who used to let their family sow drink beer and of course, have plenty of bacon and traditional hog roasts. I’ll even admit that I managed to run straight into the pigpen while my childhood best friend’s dad was in the process of cleaning the manure out of it. Yeah, that was pretty gross which is why I remember it 40 years later. However, never have I ever witnessed pigs playing tug o’ war. That’s new to me. It wasn’t even something we discovered in our research into games about Iowa.

Pigs don’t really play organized games of tug so naturally I’m referring to a pig-themed card game called Mighty Pig Tug from RoosterFin. It was designed by a teacher so the setup and learning curve are quick and easy. At the same time, it’s intended to be played by the entire family which is why you’ll see it show up tomorrow in our second 2019 guide to family games. Watch for it there, but in the meantime you can enter to win a copy here!