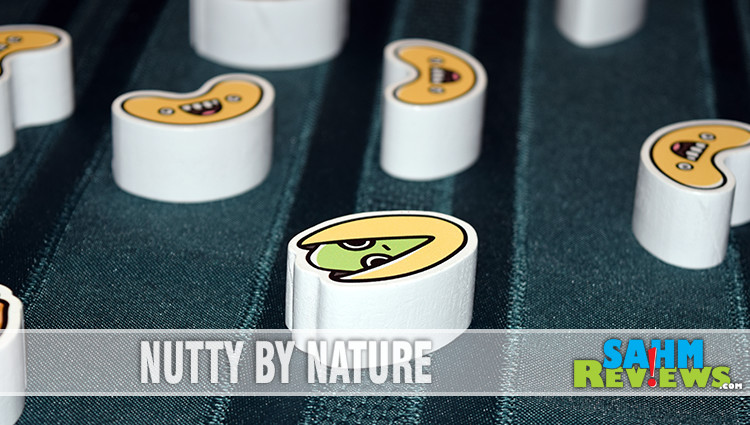 When I sat down to write today, I began reflecting on the many changes that I’ve witnessed in my family, on this blog and among those around me. Madison just finished driver’s education class, Kennedy is running around 5 miles per day with the cross country team, Scott and I are getting ready to celebrate our 25th wedding anniversary (during Gen Con of all times and places) and SahmReviews just celebrated its 10 year anniversary! We’ve come a long way in those 10 years, but what is cool is when we get to see others succeed and grow as well. 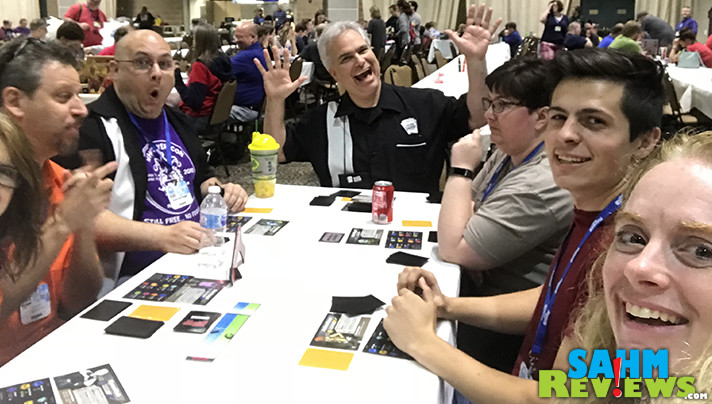 Back in 2014, we shared about Sutakku dice game from a new-to-us company called Smirk & Dagger! When we met them at ChiTAG, they explained that most of their games include a “take that” mechanic. Designed to annoy your opponents, games like Run For Your Life, Candyman even thumb their nose at traditional kids’ games. Since that time, we’ve kept in touch, featured several of their titles, provided input regarding the artwork and name for one of their games and playtested some of their upcoming offerings. We consider the company’s brainchild, Curt Covert, to be a friend. Not only has he continued to release entertaining, backstabbing games, but now he’s nurturing a new baby, Smirk & Laughter! This new sister company will be the home of the games that inspire happiness, bonding and laughter. The first title in this new line is Nut So Fast, a quick-paced, action filled party game for up to six people.

If you’ve ever played Musical Chairs or the game of Spoons, then you already have the premise of Nut So Fast figured out. It’s is a tactile party game that involves grabbing playing pieces from a pool placed in the center of the table. As such, it’s best to gather together around a small table so everyone can easily reach the pieces. Place the Almond and the Pistachio in the center then enough each of Cashews and Walnuts equal to the number of players minus 1. Deal each player 1 blue “Score the Round” Base card. Shuffle the red NUTS! cards and deal them as equally to all players as possible. Some people may end up with more but that’s okay. We usually assign the extras to the girls since they typically do the best at dexterity and speed games. Prepare the red cards in a stack like you’re getting ready to play a game of War and place the blue Base card at the bottom. 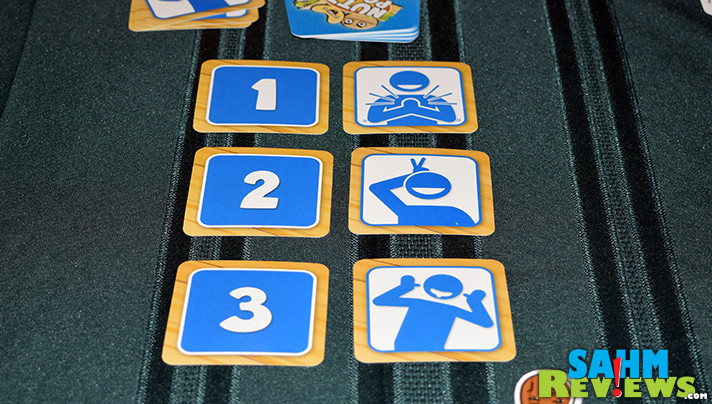 To the side of the playing area, place the 1, 2 and 3 cards within view of everyone. Randomly place one Nutty Pose card next to each number. Review the various actions with all the players to ensure everyone knows what they represent and how to make the action. These will come into play shortly! 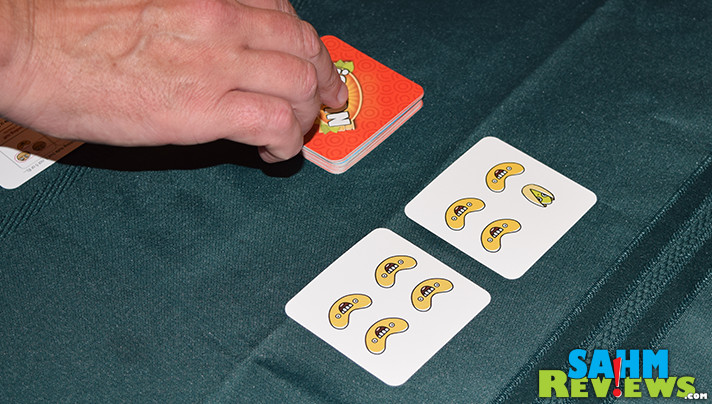 Starting with the first player, take turns flipping a pair of cards from your personal deck. You’ll be flipping them one at a time, covering any previously flipped cards from your deck. These cards feature a variety of nuts that look strikingly familiar to the ones you placed in the center of the table. You would have to be nuts not to see what happens next… you’ll be on your eye out for particular mixes! 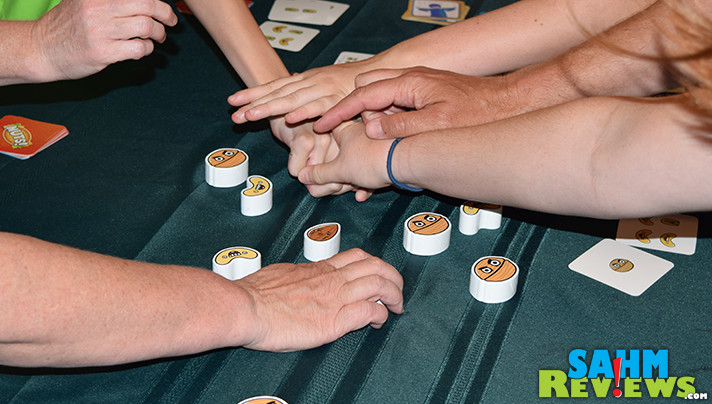 When you flip a card, all players survey the card for triggers that require a reaction. If an action occurs, you’ll resolve that before flipping another card. Here’s what you’re looking for:
1) If you see exactly FOUR matching Walnuts, Cashews or Pistachios THEN you’ll grab the corresponding nut from the center of the table.
2) If you see exactly SEVEN matching nuts THEN grab the Almond!
3) If you see two sets of 4 matching nuts OR 8 of one type of nut THEN grab the Almond!
4) If you see a number card THEN ignore the nuts and do the corresponding Nutty Pose action.

If you weren’t the fastest then there are consequences in Nut So Fast! If you’re the slowest to grab a Cashew or Walnut then you’ll take ALL the face up cards in front of the Active player and places them underneath your blue Base card. Those will count toward end game scoring. There’s only one Pistachio so if you’re the quickest to grab it then you’ll collect all the cards from in front of the Active player and give them to any other player! If you are able to grab the Almond, your bonus is that you get to take all the cards from below your base (the ones that would score at end of game) and place them on the top of your pile! 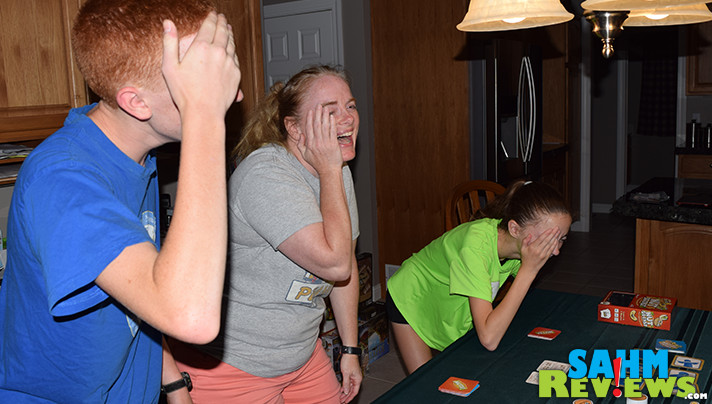 Finally, if you’re the slowest person to do the Nutty Pose then you’ll take all the Active player’s face up cards in the same penalty fashion as missing out on the Cashew or Walnut. There is usually a consensus as to who was slowest but if all players agree it’s a tie then nobody is penalized. The final penalty occurs if you grab an incorrect nut or jump the gun and grab one before the action is actually triggered. In these situations, you take two cards from the top of your deck and place them underneath as penalty points.

If an action isn’t triggered as a result of a flip, you flip your second card and it’s added to the existing. If there still isn’t an action triggered, the player moves clockwise and the process starts over again. Since your cards weren’t removed from in front of you, they’ll be part of your next turn so leave them there. When someone reveals their blue Base card, they complete their turn and the round is over. Everyone counts the number of cards under their blue Base card and records them. The person with the lowest score after three rounds wins Nuts So Fast.

It’s a fast-paced game but not anxiety-ridden like Smirk & Dagger’s Paramedics Clear! game. It requires minimal counting skills so Nut So Fast is good for all ages. The inclusion of the Nutty Poses isn’t the primary part of the game so it shouldn’t scare away people who say games like charades are Nut their thing. Affordably priced, you can pick up a copy of Nut So Fast on Amazon or direct from Smirk & Laughter. They have a number of new titles coming out soon across the two Smirk properties so stay tuned to their Facebook and Twitter accounts for details!

What is your favorite kind of nut?