It appears I’m a sucker for games that have to be assembled before playing. And so are my daughters. They regularly pull out two games we found at thrift, Crossfire and BattleDome. In some cases it takes longer to put together than it does to play just one round! And then I have to take it apart and try to get it back into the box.

Fortunately, this week’s Thrift Treasure find isn’t as bad as those other two. It does require some minor assembly, but it’s nothing that a 4yr old couldn’t do on their own. And there’s plenty of room in the box for all of the pieces – no secondary game of Tetris required! 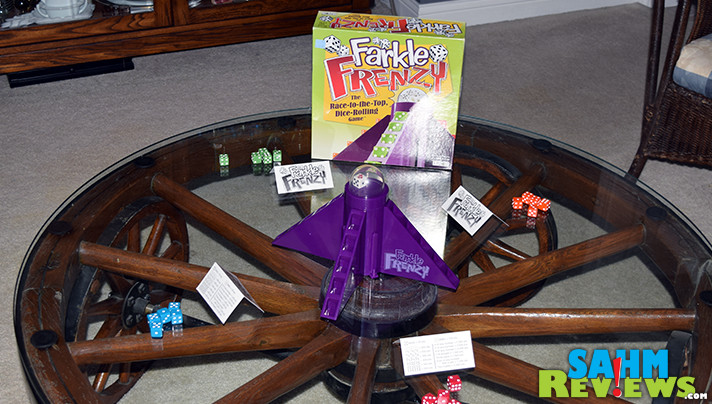 Farkle Frenzy by Patch Products (now PlayMonster) is a spinoff game from the classic dice game of Farkle. Farkle was originally published in 1982 and has been offered in well over a dozen different versions, all with the exact same rules. Farkle Frenzy hit the shelves in 2011 and appears to be the only time it went to press.  It is a very close cousin to the original Farkle, with one minor change that really mixes things up. 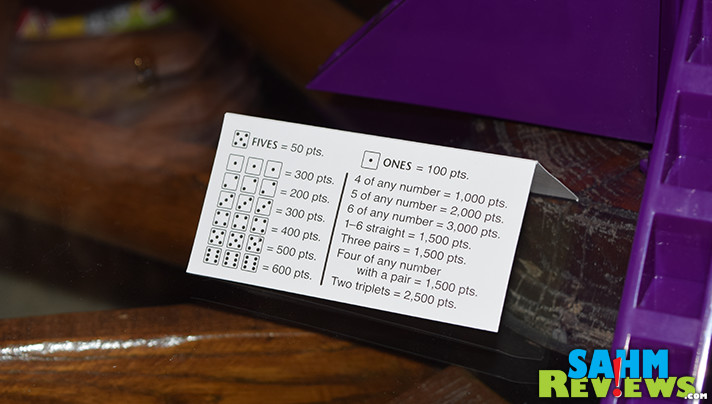 A quick refresher about Farkle. On your turn you roll six dice and keep any that score. Ones and fives always score, as does any 3-of-a-kind. Straights and pairs ‘could’ score, but only if rolled in one roll – you can’t keep part of a scoring set, hoping to finish it later. If you ever roll and can’t keep something that scores, your turn is over and you receive no points. Score all six dice and you can continue to roll (basically starting another turn) using the same rules. Again, if you “Farkle” and don’t roll something you can set aside, you’ll lose all your points. 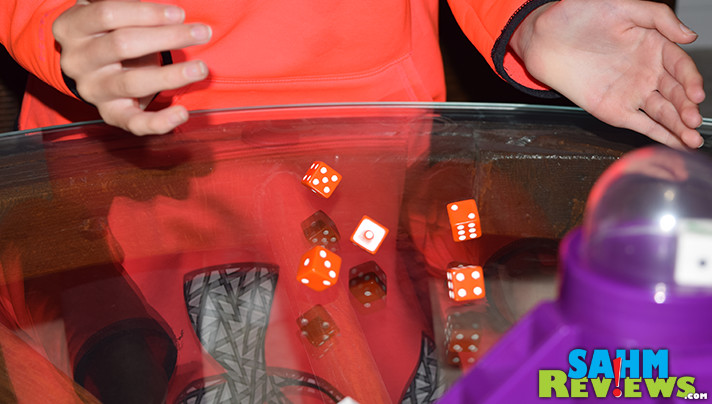 One of the main complaints about Farkle is that with four players the time you have to wait for your turn takes too long. Farkle Frenzy looks to fix that issue by supplying a set of five colored dice to each player. A sixth die rests on top of the plastic tower inside a Trouble-like dice popper. This Common Die is rolled at the beginning of each round and the results are used by all players. 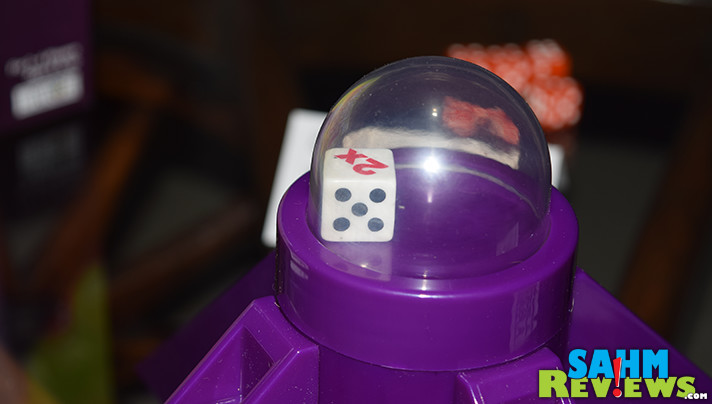 Instead of being a normal die numbered one through six, this Common Die has custom faces. Two sides are fives, two are ones. One side is a “2x” which doubles your score for the round, while the other is a Wild. Whoever rolled the common die (active player) decides what the wild will represent after everyone rolls their five dice the first time. 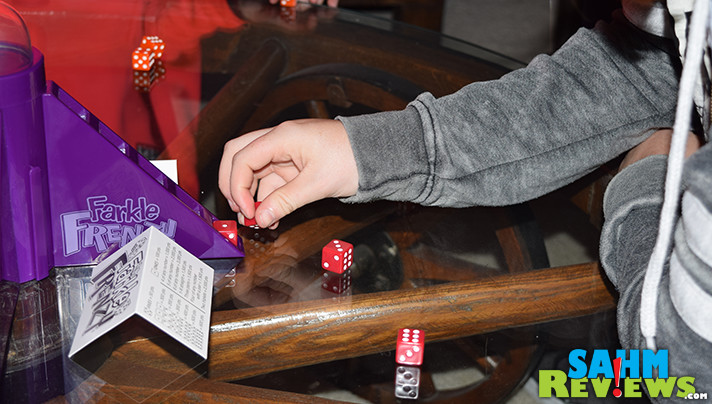 Kept dice are placed on the tower for everyone to see. Scoring is the same as regular Farkle with ones and fives each providing points, as does any set of three. Six-of-a-kind would appear to be the highest amount you could score in one turn (forgoing rolling again) at 3,000 points, but if you’re lucky enough to get 5-of-a-kind while the “2x” appears on the Common Die, you’ll walk away with 4,000 points! The first player to reach 10,000 points or more wins Farkle Frenzy! 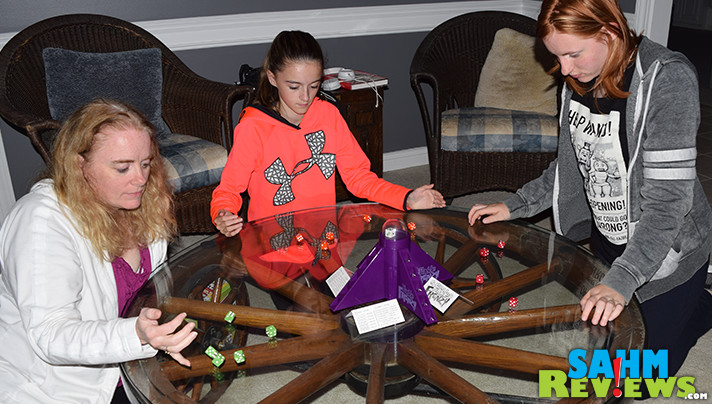 So where does the “Frenzy” part come in? A special rule is applied in Farkle Frenzy. Since everyone is rolling at the same time, the round ends when all players decide to stop rolling and keep their points, or until at least one player fills the plastic riser with all five of their dice. At that point all other players stop rolling and keep the points they have accumulated up to that point. The player who scored their five dice may elect to stop or take them all back and continue rolling.

Surprisingly, you can still find brand new copies on Amazon for under $20! Or do like we did and keep an eye out at your local thrift store or yard sale. And if you find more than one copy, it looks like you can combine the two to create an 8-player version!

Have you ever played Farkle?