We’ve always said it’s never too early to introduce your children to the concept of learning through play. Let’s face it – kids don’t want to be in school. They want to be playing with friends and family whenever possible. And now with the availability of smart phones, their attention is further shared with that glowing screen.

We recently happened across a new company, Logic Roots, who is also promoting the same ideals of learning through play. They have a full line of educational games with specific lessons integrated into each title. While our kids are past the simple mathematical concepts taught in these games, they certainly appreciated how much more fun it would have been to learn their basics with these tools rather than rote memorization. Let’s take a look at some of their titles. 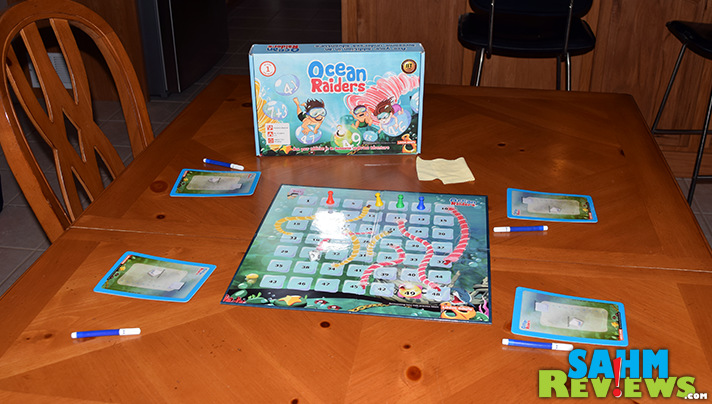 Designed for 1st Grade and above, Ocean Raiders aims to teach a number of valuable skills including number recognition & sequence, addition of 1- and 2-digit numbers as well as addition with zero. The included board lists the numbers 1-49, but not in sequential order. On each player’s first turn, they will roll a 10-sided die and place their pawn on the resulting number on the board.

After all players have established their starting number, on their turn they will roll the die again, this time adding the result to their previous position. Find the correct sum and they can move their pawn to this new spot. Get it wrong and remain on the current space and losing your turn. 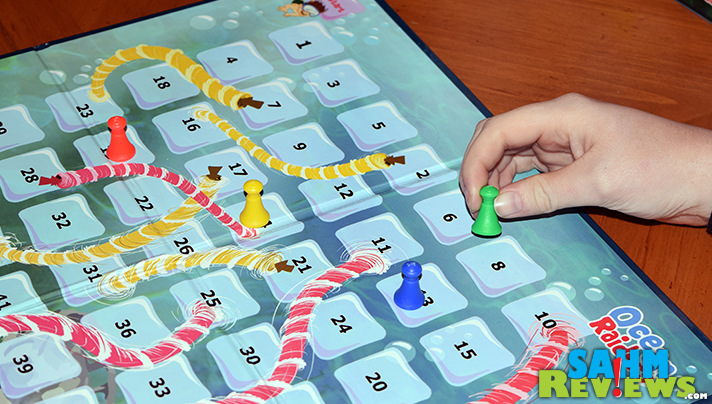 Similarly to Chutes & Ladders, landing on a space which includes a red or black arrow forces you to ‘slide’ along the typhoon trail, exiting at the other end. Some move you forward on the board, while others move you back. Ultimately players are racing to get to the treasure at the “49” space and must land there by exact roll. If you roll a number that creates a sum more than 49, you simply stay put and wait for your next roll. The first player to hit 49 exactly wins! 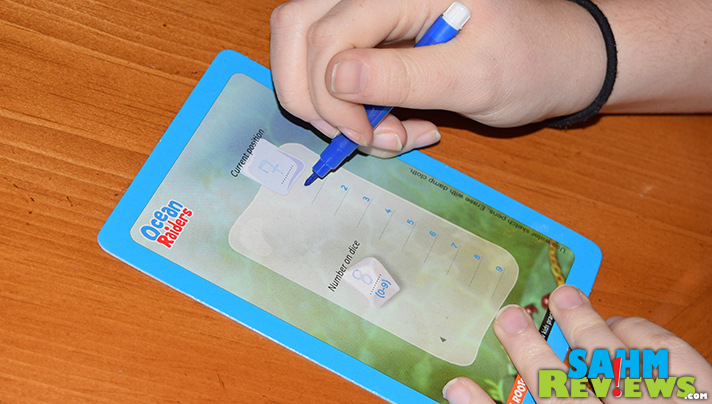 Logic Roots has also included kid-size slates and dry erase markers to help them with their addition, especially when you might need to carry a one. Ocean Raiders is available on Amazon for under $17. 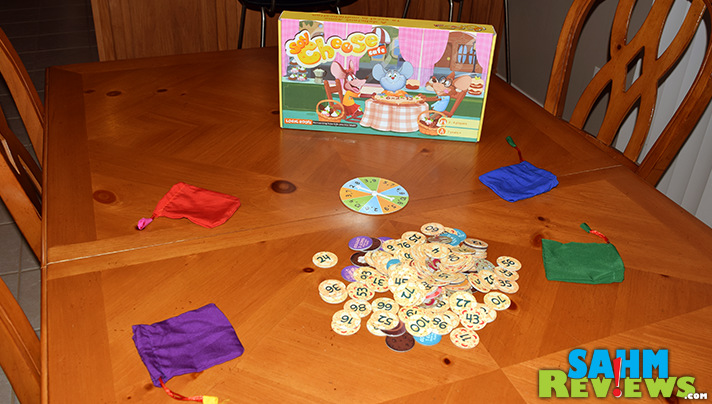 In 2nd or 3rd Grade, your kids will be ready for multiplication. Logic Roots also has a title specifically created to help them excel in practicing their times tables. Say Cheese Cafe is set in a world of mice (Miceland) and each player is trying to grab as much food as they can. 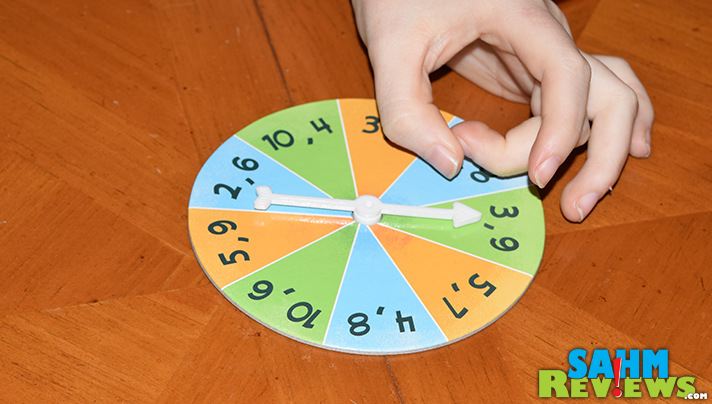 Food is represented by cardboard tokens and includes cheese with numbers on them, pizza, desserts and even spoiled food. Each player begins the game with a pouch full of tokens, evenly & randomly distributed. The first player spins the included wheel and chooses one of the two resulting numbers to be the multiplication table of the round. They then draw a token from their bag and place it into the basket. 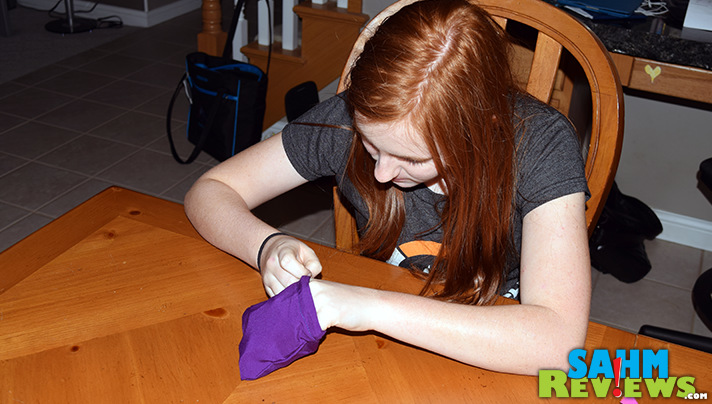 The next player also draws a token, and if they recognize it as a multiple of the number chosen for the round, calls out “Cheese” and collects all tokens in the basket. If their token isn’t a multiple, or they call out the incorrect formula for the number, that token remains in the basket and their turn ends. Once everyone runs out of tokens in their pouch, the game ends.

But Say Cheese Cafe is a bit more than just pulling tokens from a bag. There are special tokens that allow you to steal from other players, dessert tokens worth bonus points when collected and Rotten Cheese tokens that ruin all other food in the basket (discarded from the game)! Prime numbers are also represented as pizza and will help your child recognize these rarer numbers.

Also available for under $17, Logic Roots’ Say Cheese Cafe includes everything you’ll need to play with up to four people. Consider this one for nearly any grade school age. 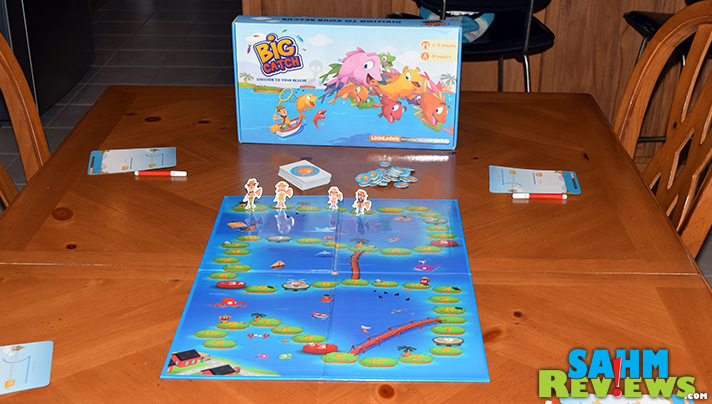 Division is probably the hardest basic math skill to master and is the one introduced in schools last. The same thing applies for Logic Roots’ Big Catch, recommended for ages 10+. In this game you are a fisherman trying to escape the island. To do so, you must feed the villagers and get their help moving from island to island. 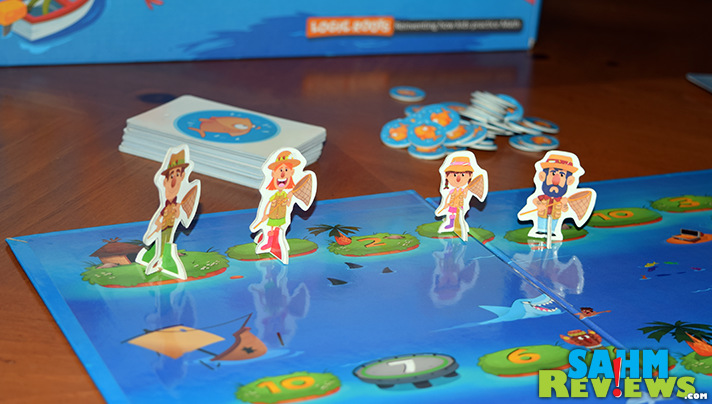 Each player begins on the same island with a “3” printed on it. This represents the number of villagers residing on that island and whom you must feed. Draw a card from the deck – this is the number of fish you caught during the day. Using the included slate and dry erase markers, figure out how many fish each islanders will receive (you must evenly distribute them) and take tokens for any remaining fish. You may then move your fisherman a number of islands equal to the result. This new island will have a number on it and it becomes the denominator for your next fishing trip.

At any time you may add leftover (remainder) fish to your day’s take to help you move further on the board. But not all islands are created equal. Again borrowing the mechanic from Chutes & Ladders, landing on an Urban or Town Island will force you to move to another island. Savage Islands are also detrimental. The island’s savages force you to retreat five islands back and then continue normally on your next turn. The player to successfully reach the home island first is the winner!

Once again, Logic Roots has kept the price of Big Catch under $17 and is correctly targeted at 4th & 5th grade children who are just beginning to learn the basics of division.

Be sure to check out Logic Root’s full line of educational titles on their website and watch their Facebook and Twitter feeds to be informed of new titles entering the market. A number of their titles were highly recommended in our annual Gift Guides and I wouldn’t be surprised to see some again there next year!  Now if they would only make some refresher courses for us older kids!

Which one of these games would be the best fit for your family?