When I was much younger, one of my favorite things about the comic section of the newspaper was the “Find the Difference” challenge. Usually there were six differences between the two almost-identical drawings and I could certainly find five of them right away. That sixth one always took me much longer and I wouldn’t always discover it on my own. But I still tried every day!

I eventually graduated on to trying to find Waldo (remember, this was the late 70’s/early 80’s – it didn’t take much to keep us occupied). It seemed everywhere you turned people were talking about this new type of ‘game’ where you frantically search for a guy wearing a red and white striped shirt and perfectly round glasses. He might be at the beach, in a castle or at a carnival. Oddly, all the other people looked the same to me! 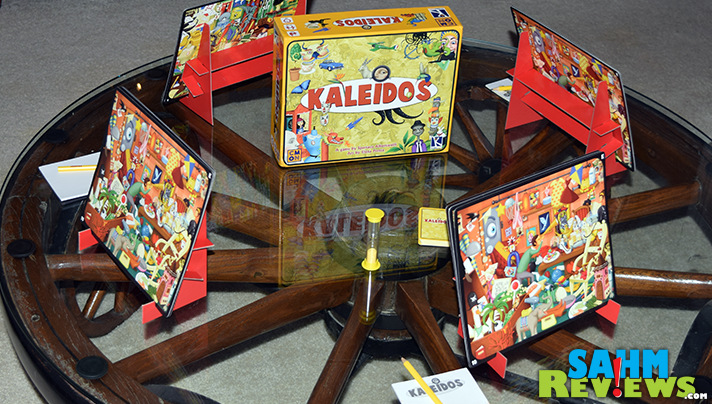 So when I came across Kaleidos by Cool Mini or Not, I assumed it was another “find the tiny item in this big picture” type of game based upon the box artwork. And it is…but it also isn’t at the same time. There’s quite a bit more to this game than meets the eye.

The first thing you’ll probably notice is the ten beautiful composite drawings done by Elena Prette. She has a unique style, reminding us a lot of the movies by Tim Burton. I studied her drawings in Kaleidos and was amazed at not only the level of detail, but the many hidden items that are easily overlooked. She was the perfect choice for this type of game. 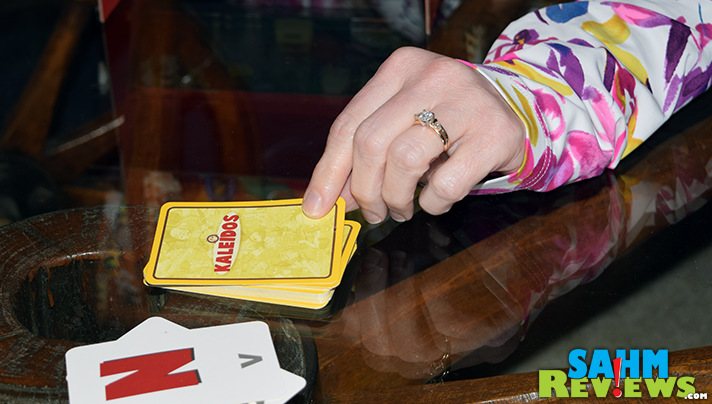 Kaleidos works a lot like Boggle in that you are trying to create a list of words different from that of your opponents. Each player (or team of players) receives a cardboard easel and five double-sided cards depicting the artwork of Elena Prette. Players agree on which illustration to use on each round and a random card is drawn from the included deck, revealing a letter of the alphabet.

This card and the included sand timer are flipped at the same time and everyone rushes to find items in the drawing that begin with the letter matching the one revealed on the card. The trick is that many (if not most) objects can have different names and all are valid. For instance, you might see a bird. But others might call it by its proper name – cardinal. You can also use it for “beak”, “feathers”, “wings” and so on. The only requirement is that you be able to point it out on your drawing card when questioned, so remember where you got it from! 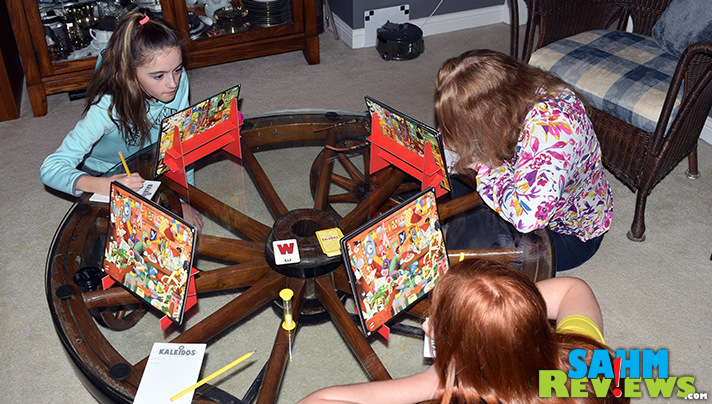 When the sand timer runs out, players compare their lists. You receive 3 points for any word that no other player wrote down and one point for a word that at least one other person also discovered.  Rounds can be easy with common letters like “S” or “M” and very difficult for lesser-used consonants like “W” and “K”. Because these letters are drawn randomly, you’d better brush up on your vocabulary! 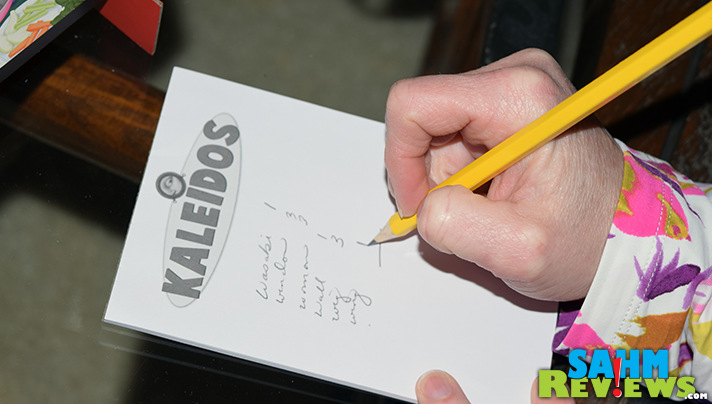 It is suggested a game of Kaleidos should last 10 rounds, utilizing each of Elena’s drawings once. You can certainly agree to run shorter or longer games depending on the mood and attention span of the players involved. Each round’s total is tallied on a score sheet and the player/team with the highest score at the end of ten rounds is the winner! 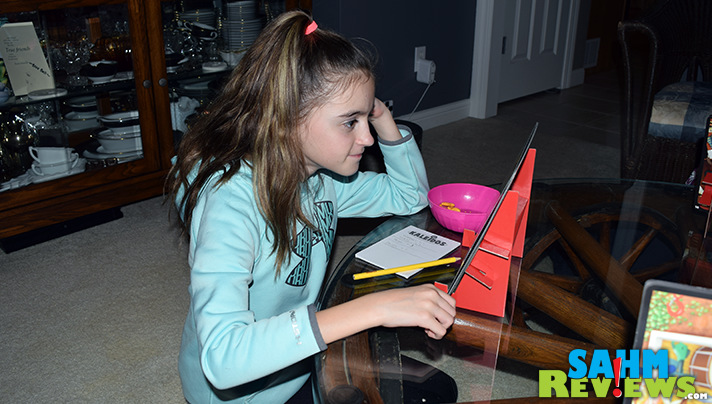 While the box recommends Kaleidos for ages 10+, this is another case of product testing limiting the suggested age ranges. Kaleidos can certainly be enjoyed by children much younger and I would even go as far as suggesting it would be a great word association tool for toddlers just beginning to match words with objects. Maybe not so much as a game in that sense, but challenging them to point out as many items that start with a certain letter. Either way, the sweet spot should be ages 7+ and any advantage you think you have as an adult with a stronger vocabulary will instantly be squashed by the sheer speed of your kids’ recognition skills.

Right now you can find Kaleidos on Amazon for around $26 – a huge discount off the normal MSRP of $40. 2017 is lining up to be a great year for Cool Mini or Not, so make sure you’re following them on Twitter and Facebook as they have quite a few amazing Kickstarter campaigns in the works!

What was your favorite part of the newspaper comic section?

Tags: board games, CMON, Cool Mini or Not

10 thoughts on “Kaleidos Board Game Overview”