This week I was excited to find another 80’s-looking abstract game at our local Goodwill. But it tricked me. While it had the colors and styling from the late 1980’s, Stranded by Talicor was actually published in 2009! And to complicate matters more, the instructions left me wondering if it should be classified as an abstract game or not.

Abstract games are generally considered to be un-themed, with both players having equal pieces. Stranded doesn’t assign pieces to any one player (other than their main pawn) and has a small story line behind it. I’ll let you be the judge if it takes the game outside of the abstract realm.

The basis of Stranded is similar to the television show, Survivor, where the last man standing wins. Each player controls a tower in their color. The board is set up with two colored plastic platforms on top of each island. Player towers begin in each of the corners (Stranded supports 2-4 players). 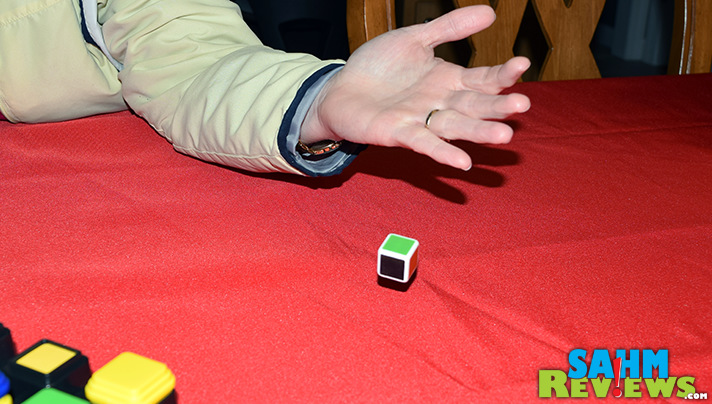 On each player’s turn they roll the included custom die and perform two actions if possible. First they remove one platform from anywhere on the board that matches the resulting die color. This platform must be removed from the top of the stack and cannot be occupied by a tower. 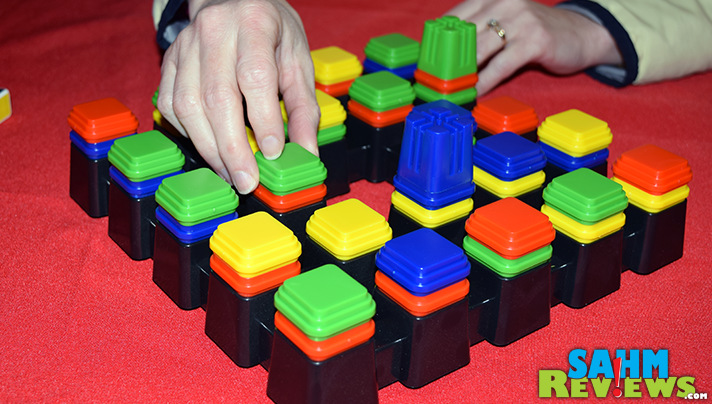 Then they must move their tower horizontally, vertically or diagonal in a straight line and end on a platform of the same die color. If the die shows the color “black”, the player may choose any color for both actions, but it must be the same color for both. If they cannot move to a matching color, they are considered “Stranded” and will move their tower to an empty column that matches the color rolled and is out for the remainder of the game. If they are lucky and there is also no matching empty space, they don’t move at all and are still in the game! 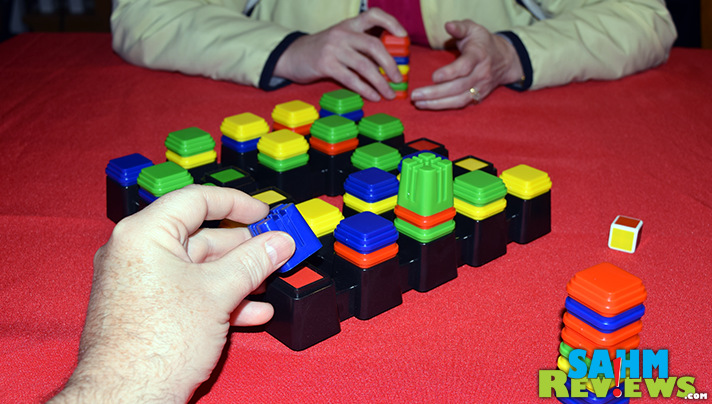 When moving their tower, if you pass over another player’s tower, you may pick it up and place it on top of any platform. There is also an empty spot in the middle of the board that prevents passage. You cannot jump over and must move around it. Players take turns until there is only one tower left that isn’t stranded!

Stranded was a recipient of the 2010 Creative Child Magazine Preferred Choice Award and is still available on Amazon for around $15. We were unfamiliar with Talicor before finding this copy of Stranded, so now that we know to keep an eye out for their products, hopefully you’ll see more of them featured here on SahmReviews.com!

Had you heard of Talicor before?