When you sit down to play a game, do you prefer one where you can think about your move for as long as you need? Or do you like to keep it moving with a title that requires a timer, limiting the amount of time each person can take on their turn?

For me I guess it depends on the mood I’m in. Longer, thought-provoking games are more relaxing. But I do have to admit there are times I wish there was a timer when someone suffers from AP (Analysis Paralysis) trying to decide what to do. Many games we play are most certainly AP-inducing and it is usually solved with a couple friendly comments to the offender.

Sometimes we only have a limited amount of table time and want to make sure we get the game finished. There’s nothing worse than a game when you’re leading and have to pack it up early. No way will your friends give you the win! Of course, if I’m way behind I’m happy to call it a night and try again next time.  😉 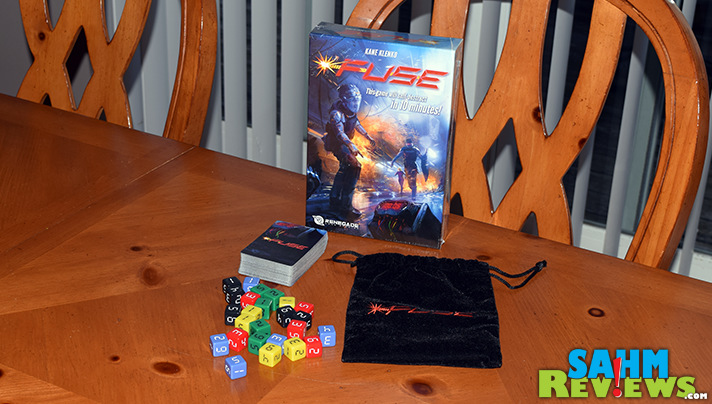 For quite a while now a friend has been bringing his copy of Fuse by Renegade Game Studios to our weekly game night gathering. I had never gotten the opportunity to play it, but now after getting my own copy I wish I had sat down earlier and given it a go. And thanks to the need for a timer, start to finish is only 10 minutes – guaranteed!

As you might have guessed, Fuse is all about disarming a bomb. And not just one bomb – LOTS of them! In fact, you can crank up the difficulty of the game by adding more bombs (and more difficult ones) to the mix. The instructions even warn that the hardest setting, Insane, may very well be impossible to win! 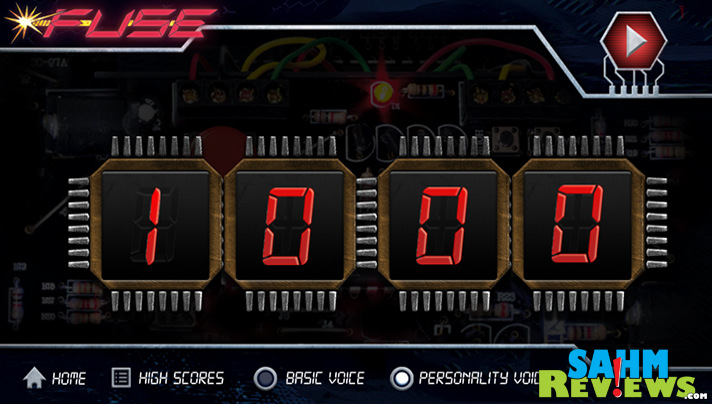 You’ll need to provide a timer of your own – the clock app on your phone works perfectly. Renegade Game Studios also provides a free app for iOS and Android that not only has a handy 10-minute timer, it also includes sound effects and voice-over to enhance the mood! 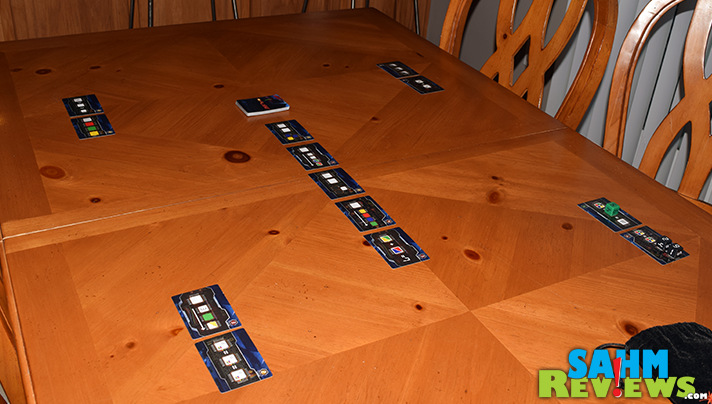 Each player is dealt two Bomb Cards which they put face-up in front of them. Five additional Bomb Cards are set in the center of the table, with the remaining cards (number determined by difficulty and number of players) are shuffled with the Fuse Cards and put in a draw stack next to the five Bomb Cards. Then the timer starts! 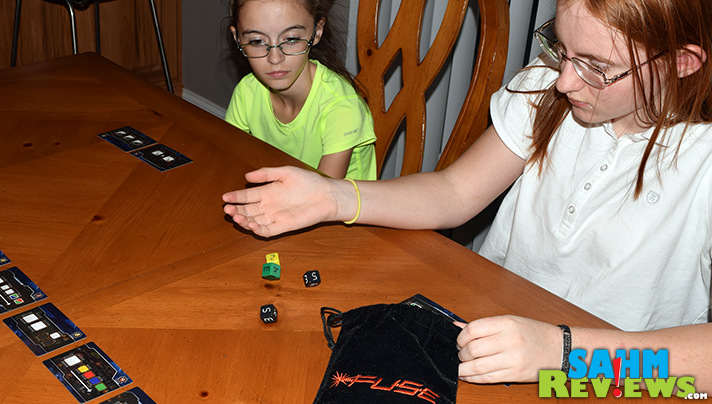 The starting player grabs dice from the bag equal to the number of players and rolls them. Players quickly decide where to put the dice, as each Bomb Card has a formula that must be created in order to diffuse it. Some bombs require a certain dice number, while others a color. Many also have additional limitations depending on where you place them. For instance, one might command that every die be of greater value as you move from left to right. Others challenge you to build a stack of dice – knocking it over will force you to put all the dice back in the bag. 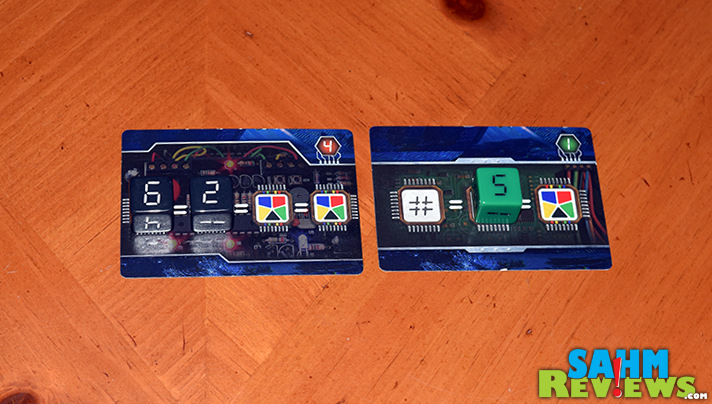 Every die must be placed in a matching space on a Bomb Card or else it is re-rolled. Every player must then take one die (if possible) from their Bomb Cards and place it back in the bag along with this re-rolled die. The chosen dice must match either the number or the color of the re-rolled die.

Once a Bomb Card is completed, set it aside (face down), return the dice to the bag and select a new bomb from the five in the center. Of course, draw one to replace it. If you draw a Fuse Card, it will have either a number or a color on it. Every player is then required to return one matching this variable to the bag. 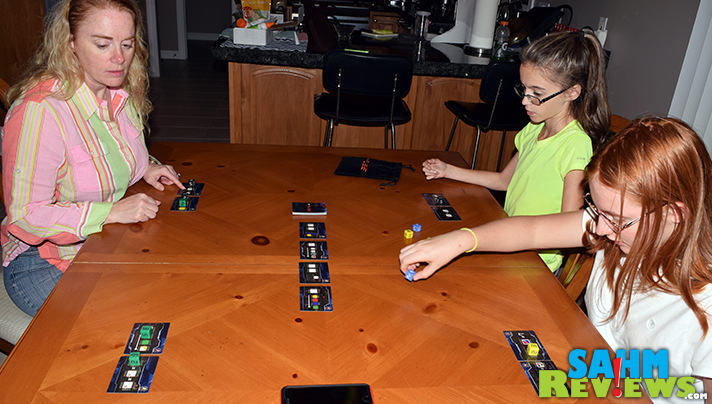 Once all of the bombs in the center of the table are taken (the draw stack is depleted and only the two bombs in front of each player are left), the game is over. That is unless you run out of time, then it’s really over! If the timer hits zero, everyone loses! If your team is successful in diffusing all the bombs, then you can tally your team’s score by adding up the points in the corner of each diffused bomb. Take an additional 10 points for winning the game, add a point for every 10 seconds left on the timer and award yourself a bonus of 2 points for every Fuse Card you had to complete. Record your team’s score on the back of the instruction booklet and make beating that your new goal!

This best-selling title from Renegade Game Studios is available at your local game store, Barnes & Noble as well as Amazon for around $25. Be sure to watch their Facebook and Twitter feeds as they do have a couple new games in the pipeline!

Do you prefer long or short games?