Right before school let out for the year, we enjoyed Alice Through the Looking Glass as a family at our local movie theater. It got “OK” reviews from the general public, but my girls loved it. I guess that’s the opinion that really matters.

Then in June we traveled to Origins Game Fair for a 4-day vacation of meeting up with friends and playing lots and lots of games. By sheer coincidence a game at Cool Mini or Not‘s booth caught the attention of both daughters, Play Me. It wasn’t a movie-branded game, but one still set in the public domain world of Alice in Wonderland. 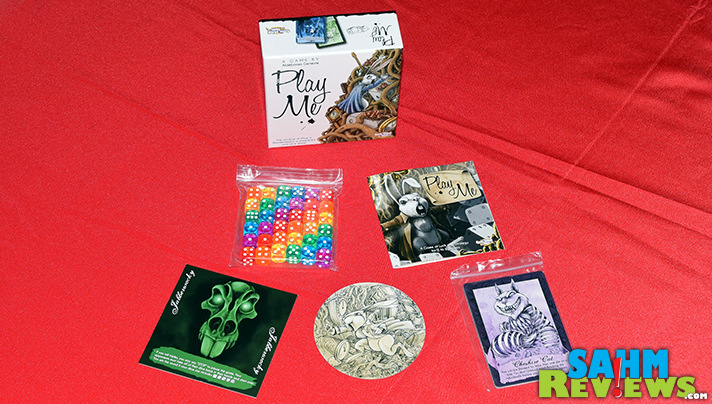 And it turned out to be a new favorite for our youngest. She’s a dice fanatic, regularly purchasing Chessex sets just “because they’re pretty”. Play Me includes enough dice for up to six players, each in a vibrant transparent shade. Inside you’ll also find color-coordinated character cards and an ominous Jabberwocky tile (more on that in a minute).

Play Me is probably best classified as a dexterity game, even though we aren’t stacking or balancing anything. Your goal is to line up your dice in a straight (one through six) before any of your opponents do the same. Instead of taking turns, everyone rolls and re-rolls at once as fast as they can. You may only put one die per roll into your straight and you must also build it in order from lowest to highest.

You can also slow down the progress of others by blocking them with your dice. If you roll the number that someone else needs, instead of adding to your straight, you can put your die on their row, forcing them to roll the same number to unlock it, and then rolling it again to eventually add it to their set.

But it’s not as simple as just having a lucky roll. Each player has their own character card which awards them with special actions and powers. Some protect you from being blocked, while others let you save dice for later rolls. Each player will have their own abilities, which will make each game different depending upon which are utilized.

Once you complete your straight, you do not win! Now madness has taken over your body and you must flip your character card over. Not only do you lose your ability, there is a new ‘penalty’ that must be overcome in order to win the game (two round wins are needed to be declared the overall winner).

However, if everyone turns mad, the last person to do so is transformed into the Jabberwocky, while the others revert to their “Wonder” side of the character card! With this event, Play Me turns from a head-to-head competition to a 1 vs. many battle. The Jabberwocky’s goal is to turn everyone mad by winning a round and choosing a player to flip their card. The other players’ goal is to win as many rounds as there are total players in the game! Either the team, or just the Jabberwocky will win a game that makes it to this level! 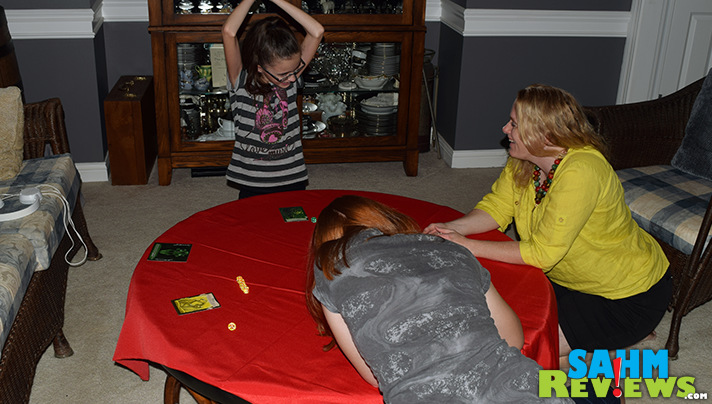 As I mentioned, Play Me has become quite a favorite of our youngest gamer, who has taken it upon herself to teach dozens of others how to play at our local game night. Of course it doesn’t hurt that speed is a factor, a skill both of my daughters seem to excel in.

For just over $20, Play Me has already given us many hours of entertainment and we expect will continue to do so. It’s not the typical game you’ll see from Cool Mini or Not, who are known for highly-detailed miniatures and fantasy-themed games, but they’ve done a good job with this title that should appeal to more than hard-core gamers. The darker theme style of Play Me is probably most appropriate for the 8+ age group.

If you like what you’re seeing from Cool Mini or Not, follow them on Twitter and Facebook to find out what they’re working on next! I hear they have a new one debuting at Gen Con featuring the seven deadly sins! We hope to have a preview for you soon!

Which Alice in Wonderland character is/was your favorite?

14 thoughts on “Sometimes It’s Cool To Be the Jabberwocky”