By now, I think I’ve made it abundantly clear that I love dice games. The randomness of the dice levels the playing field or at least gives me an excuse if I don’t do well. I’m also pretty sure that I’ve not been shy about expressing my feelings about games of speed / dexterity. Yes, I enjoy them; I just never expect to win. Because of their quick reflexes, the girls find favor in any games that intersect these two game genres.

Last year we told you about a game based on the Alice in Wonderland theme: Play Me from Cool Mini or Not. It was a dice game that involved the ability to roll quickly. If you happened to look at the photos, you’ll see I’m laughing and enjoying myself. Winning, not so much. First and foremost, gaming should be about enjoying yourself. Winning is just a bonus. 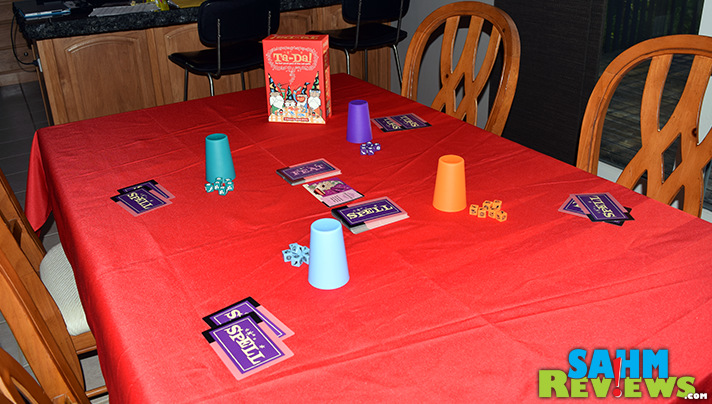 With that in mind, let me introduce you to another Cool Mini or Not game that I suspected would fall into my category of never-win-but-always-have-fun: Ta-Da! dice game. Much like Play Me, Ta-Da! utilizes a combination of dice and speed. When we first learned about this game, I was pretty sure I would never win. For the record, I HAVE won this game so let this serve as a reminder to never judge a book (or in this case, a game) by its cover! 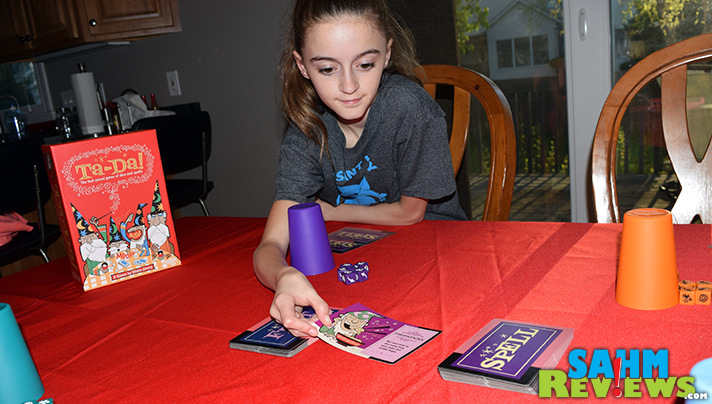 Wizards are competing before judges to showcase the skills they have learned for the Wizard Talent Show. The game takes place over a series of rounds. At the beginning of each round, players draw Spell Cards until they have two in their hand.

Then a Feat Card is revealed that explains the judges’ restrictions for that particular round. Feat Cards are designed to make the talent show more entertaining for the judges. Some examples include “You must keep one eye covered with your hand at all times” and “Your elbows must touch the table at all times”. 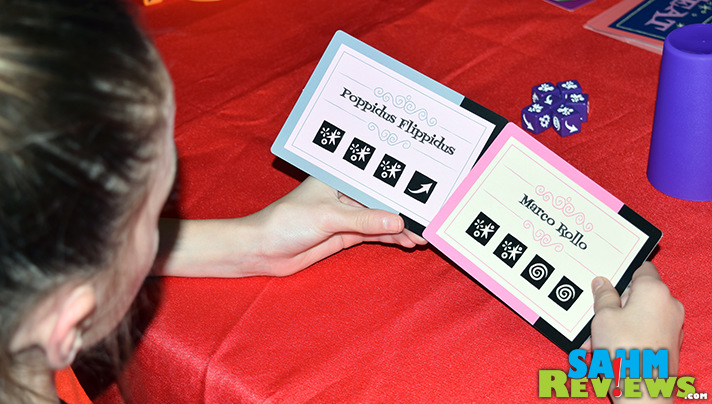 Once the Feat Card has been read aloud, wizards determine which of their two spells they think they’ll be able to successfully cast. That selection is revealed as each wizard reads the title aloud. The second Spell Card remains hidden for possible use in a future round. 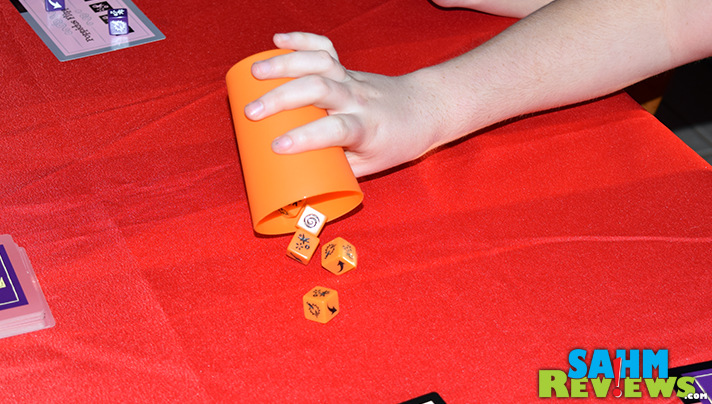 Then the magic really begins. Simultaneously, as quickly as they can, wizards begin working to complete their spells. Here’s the catch though. It isn’t like Yahtzee where you roll and scoop up as many dice as you want. Each time the dice are rolled, the wizards may only select one to place on their respective spell card. 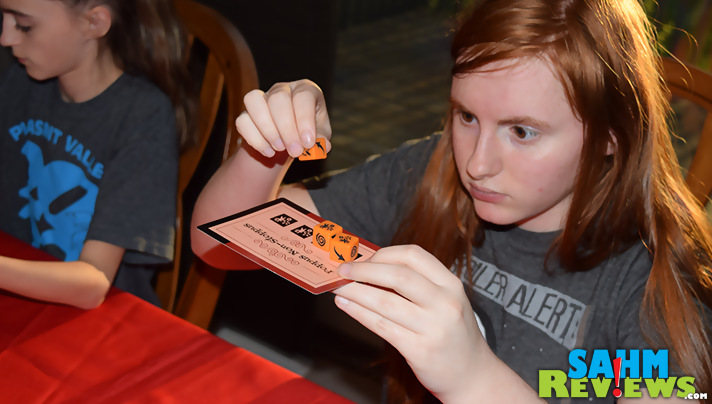 The remaining dice are returned to the cup and re-rolled, keeping in mind the Feat Card requirement for the round. This process continues in rapid succession until one wizard yells “Ta-Da!” and slaps their cup on the table to signal the end of the round. That wizard creates a stack of successfully cast spells. 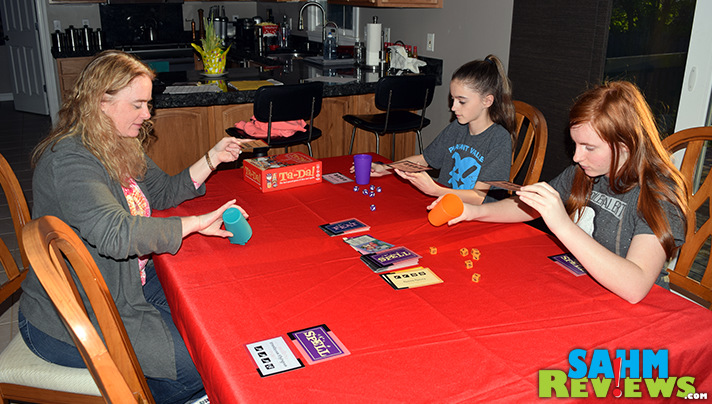 All remaining wizards place their failed spells in a discard pile then everyone draws back up to two spell cards. A new Feat Card is drawn and read aloud for the new round as well. The process continues until one wizard has completed six spells and claims the judges’ approval as victor of the talent show.

With a price tag around $21, Ta-Da! is very affordable on Amazon (or a few bucks more on the CMON website) and accommodates 2-6 people. While the box indicates the age range as 14+, I suspect that’s due to consumer product testing. There isn’t anything graphic or mature in nature and the game logistics are not difficult to understand. In our opinion, it would easily be playable by kids as young as 8.

It’s the time of year that we’ll start seeing magical announcements about their new releases so be sure to follow CMON Games on Twitter and Cool Mini or Not on Facebook for the latest news.

Who do you know that likes wizardry stuff? (Be sure to share this with them so they can come read about Ta-Da!)