When my girls were little, I purchased any Disney storybook collection I could find to make sure I had every iconic fairy tale, princess or adventure story at my disposal. I would regularly pick and choose stories and read to the girls. My only regret is that I jumped around rather than taking a cover-to-cover approach to each book. Because of my process, I’m positive there are many stories we missed and unfortunately The Jungle Book is one of them.

It isn’t that I didn’t want to read it, I just started with my favorites. To be honest, I don’t even remember seeing the movie or reading The Jungle Book when I was a kid. That doesn’t mean anything though because there are stories that I’ve read to the girls that they don’t have any recollection of.

So when I saw the movie was going to release, I didn’t put it on the top of my priority list. I figured it would be one we saw a few weeks later or when we had a chance. During my press trip to Los Angeles for the Captain America world premiere, they finagled the schedule to make time for us to see a movie screening of The Jungle Book at El Captan Theatre. After seeing the movie, I’ve since learned the error of my ways and want to make sure everyone understands!

5 Reasons You Need To See The Jungle Book!

Discovered in the jungle by a black panther, Bagheera, when he was just a toddler, Mowgli was raised by wolves, taught the ways of the jungle while balancing his own blossoming humanity. The crux of the story is that Shere Khan, best described as tiger-bully, wanted Mowgli dead. Why? Because Man cubs grow up to be men and men are bad for the jungle and those who inhabit it. 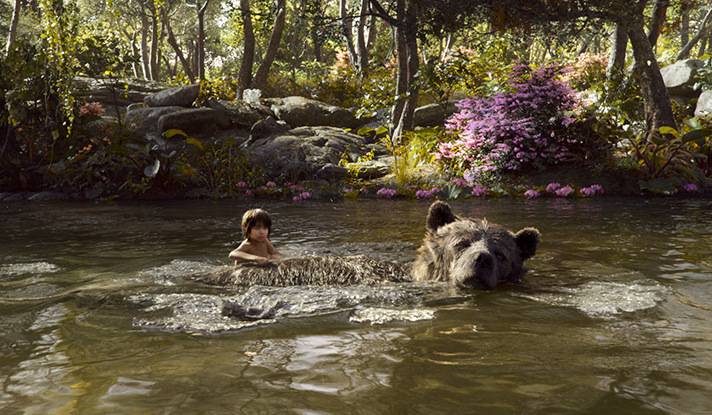 The Diversity of Characters

When you walk away from the movie, you should have been able to relate to at least one of the characters. It’s a diverse cast including the young but ambitious Mowgli, the lovably yet aloof Baloo, the wise Bagheera, the mother and protector Raksha, and even the neighborhood bully, Shere Khan.

Not every family is the same and The Jungle Book is a great example of that. I mean, seriously, even the strangest of families will sound normal compared to a toddler lost in the jungle being adopted by wolves. Without any spoilers, there was one moment in the movie where the interaction actually brought a tear to my eye. But I’m soft like that, I guess.

It’s a children’s story, but that doesn’t mean it can’t be entertaining and make a statement. Seriously, the story can open the door to discussions about subjects such as adoption, standing behind your decisions, bullying and more.

The details in the movie are fantastic and there were many times I had to stop to ask myself if Mowgli was a real child or a CGI version along with everything else. Or whether Baheera was just a really well-trained black panther. It’s actually just some incredible graphic detail. As an example, Baloo is so heavy and sports so much fur, he took nearly five hours per frame to render. The team at Moving Picture Company (MPC) were responsible for animating more than 70 species, crafting 100 million leaves and simulating earth, fire and water. A team of more than 800 computer graphics artists spent more than a year on the project.

Did you read The Jungle Book when you were a kid? Who was your favorite character?

7 thoughts on “Why You Need to See The Jungle Book”