Home / Philanthropy / We Built a School Playground in a Day! 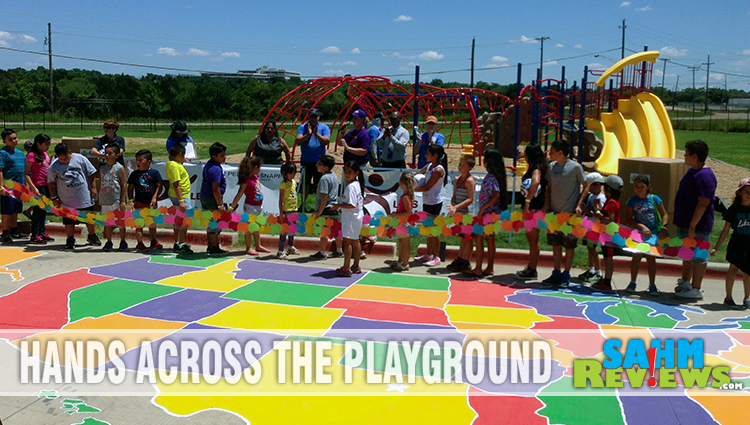 We Built a School Playground in a Day!

Have you ever been told you’re the FIRST to get to do something? I recently had the opportunity to be among the first group of consumers allowed into the Dr Pepper Snapple Group product development and research labs and I’ve been waiting for release so I could tell you all about it!

Okay, it’s more than just my excitement over being first in the lab. The overall experience was pretty cool. Let me back up a few steps and start from the beginning. Last December, I shared about the webinar that took us behind-the-scenes with Dr Pepper Snapple Group. At that time, I told you about their research procedures, their forecasting and even their philanthropic initiatives, including Let’s Play. A few months back, I was contacted by representatives for Dr Pepper Snapple Group, told they gave a lot of thought to a suggestion made during the webinar and invited to their headquarters along with a handful of other bloggers. 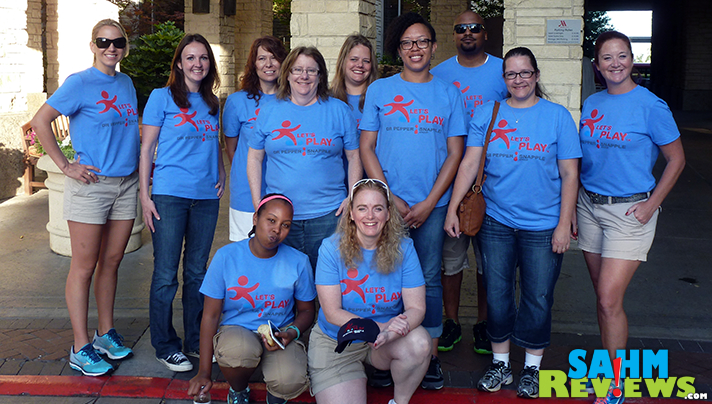 We were only there for a day and a half but the trip was packed with information about the company, initiatives and products, culminating in a philanthropic project the following day. I learned far more than I expected, not only about Dr Pepper Snapple Group, but also about myself.

First, I want to ask whether or not you would want to consume a food with the above ingredients. Take a minute to examine them closely. Go ahead. Thanks. Well? Would you eat that? When they showed us a slide with these ingredients, I turned up my nose. I like to read labels on occasion but it gives me a headache. This. THIS slide. This was eye opening and the one resource that stuck with me most after the event. No, it isn’t the ingredient list for a Dr Pepper Snapple product. It’s the ingredient list of an all-natural blueberry. Blueberry, people. It’s a blueberry. My blog summit turned into a lecture in chemistry. If it wasn’t for the can of Mott’s with Clamato Bacon Vodka I had just been holding, I would have thought I was in chemistry class in high school. Here’s the abbreviated version of what they explained: Everything has a chemical composition. As an example, the chemical composition in Asparatame is Aspartic Acid, Phenylalanine and Methanol. Milk, bananas, tomato juice, beef loin, chicken all do as well. Aspartic Acid and Phenylalanine are protein building blocks and can be purchased individually as supplements at stores like GNC and online at Amazon. Aspartame has been shown by FDA and studies to be safe for consumption. So what is the deal with the blueberries? Let’s say of that mess of ingredients there is one particular component that Dr Pepper Snapple flavor engineers want to include in one of their beverages. They could extract it naturally, but that sure seems like a waste of an awful lot of blueberries since the rest would be disposed of. Instead, they choose to synthetically recreate it. It’s exactly the same chemically whether created naturally created or synthetically. The difference is they are required to label the entire package as containing an ingredient that was made in a lab instead of in nature. We also learned a lot about food myths, but that post by itself would be 1000 words of explanation. To sum it all up, the next time you read a label at the store, think of the ingredient list for blueberries. 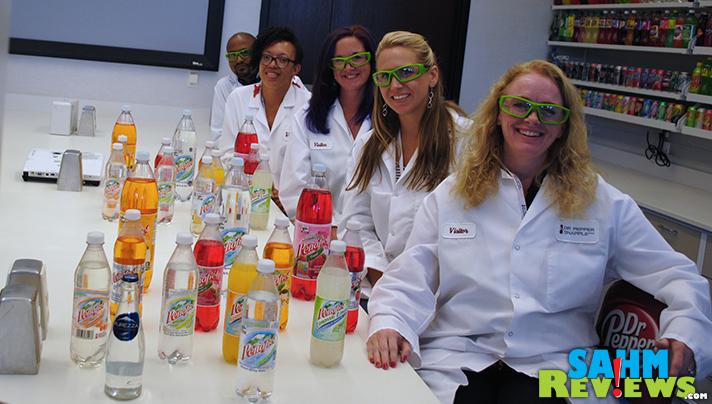 In the Flavor Lab at Dr Pepper Snapple Group

Oh, the joy of being among the first. It was very cool seeing what they have in the pipeline. We sampled several different beverages and I have to say that there are some tasty treats on the horizon. In an effort to encourage a balanced life, hydration and flavor, Dr Pepper Snapple Group has expanded a number of their lines. As an example, Snapple teas being tested include “unsweet” “sweet” and “sort of sweet” labels. They have filtered and mineral water, Canada Dry with all-natural flavors, Mott’s drinks with vitamins but less sugar and naturally sweetened 7-Up, Canada Dry and Dr Pepper.

One of my biggest emotional take-away from the event had to do with what Dr Pepper Snapple Group does as part of their long list of philanthropic efforts. They spread their projects across a variety of initiatives – some local, some national. They provide recycling centers, specifically at parks, to support the “Keep America Beautiful” program. Hometown Giving programs include matching employee donations dollar for dollar, working with United Way as well as Boys & Girls Club. Their employees are First Responders for disaster relief and they work with nature conservancy groups such as the water reserves in Texas. Yet the most visual efforts have to do with their Let’s Play Initiative where they work with Kaboom and Good Sports to build playgrounds and provide sporting equipment to schools and organizations. 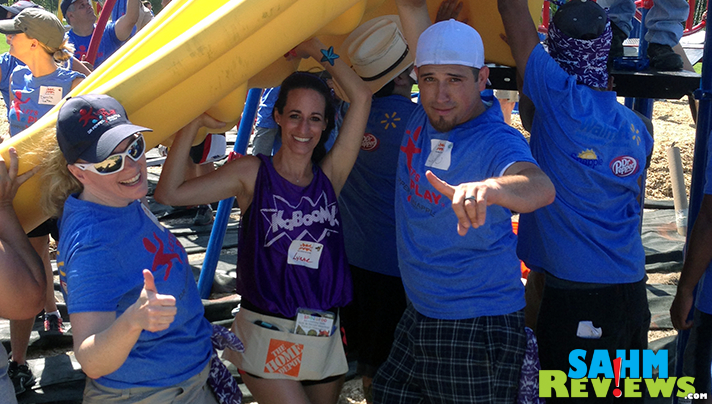 Building a Playground in a Day

The second day of the blogger summit was designated as build day at a local charter school. We would eat breakfast, bring our suitcases with us to the school where the playground was being built then leave straight from there for the airport. The many hours in-between included a whole lot of sweat equity. The last time I helped build a playground was in the early 1990s, but it paled in comparison to this. This playground build-out was a massive project involving many people. KaBOOM! and Good Sports had teams of individuals there running the event. There were staff and family volunteers from the school as well as members of the community. The rest of the volunteers were from Dr Pepper Snapple Group. They were warehouse people and drivers, management and clerks. They were team leaders and team members. Most important, they were volunteers. 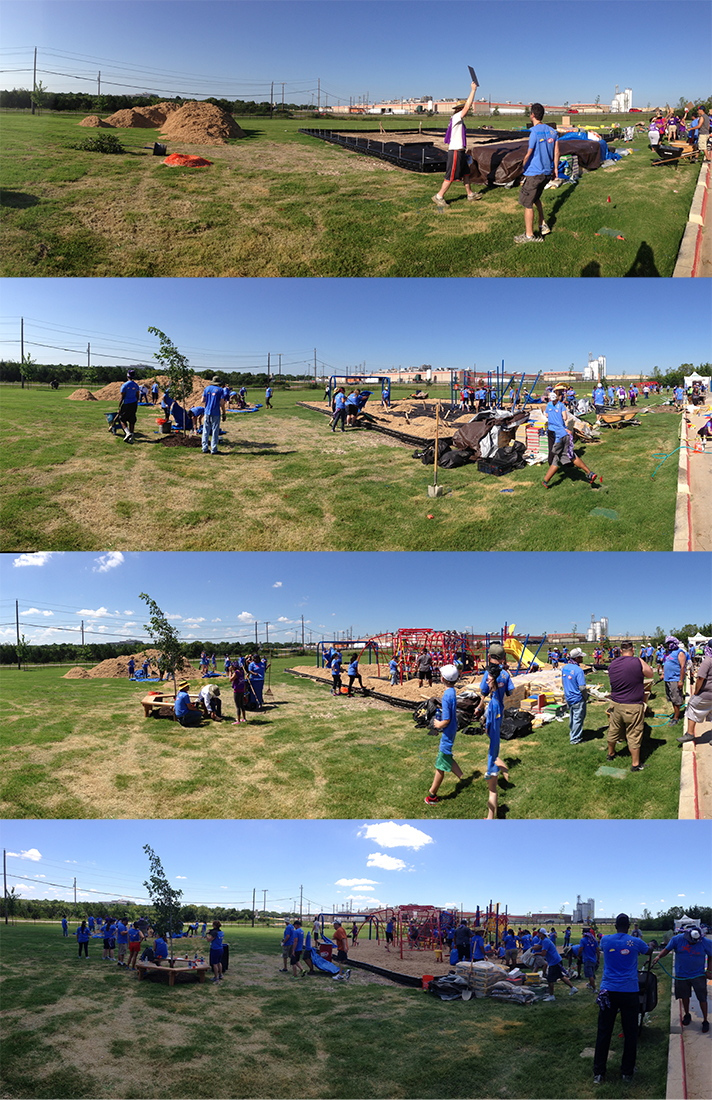 Together we assembled and installed a full playground, moved a huge MOUND of mulch, planted trees, built benches and planter boxes, built a garden, painted sidewalk games, cleaned up the school’s courtyard and distributed thousands of dollars in playground equipment. As you can see from the progression pictures, the mulch pile got smaller and the playground flourished! It was an amazing experience and I’m hoping Dr Pepper Snapple Group has a build near my home so I can participate again. If your organization could benefit from this program, check out the grant page.

In the day and a half that I spent with Dr Pepper Snapple Group, I learned so much about their corporate culture, their ambitions, their support for nutrition and of course, tasted some delicious new drinks. I’ve participated in team-building exercises before, but this one offered a reward for another generation. Every company that does interoffice camaraderie activities could learn something from this. Every time I drink one of their products, I’ll think about this trip.

Do you volunteer at projects like the playground build?

29 comments on «We Built a School Playground in a Day!»