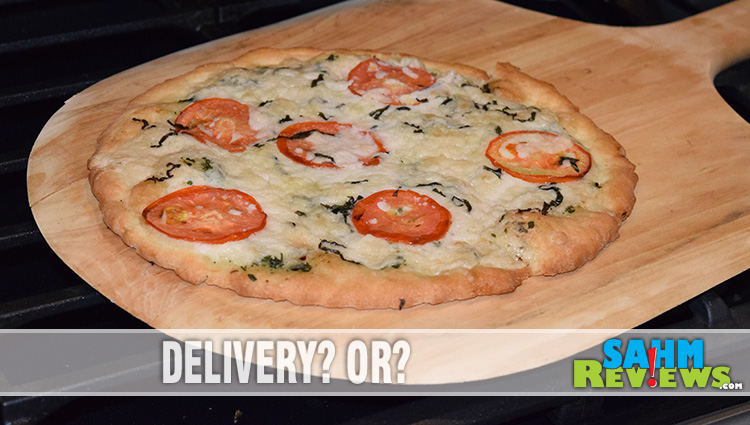 What are your thoughts on soft-serve ice cream? I like it. Except, of course, when it’s supposed to be normal ice cream. A few weeks back, one of the girls decided to have some of her leftover shake from the local ice cream parlor. Usually we have to let it set for about 15 minutes so it could soften enough to eat with a spoon. Not this time. This time it was almost totally melted. That’s when we realized that our refrigerator had finally decided to give out.

We emptied as much as we could into the freezer in the basement, then put the refrigerated items into coolers. You don’t realize how much stuff gets lost in the bottom of a freezer or the back of the refrigerator until you have to empty it. For quite a while we’ve had issues with produce staying fresh. We would purchase lettuce and other produce with good intentions, but when the refrigerator itself isn’t working quite right then it’s kind of a losing battle. At least the Ozonator bought us a little extra time. When the new refrigerator arrived, we paid attention to what went back into it.

A new refrigerator is an opportunity for a new start. We decided to think about what we wanted on hand. We hit the store and stocked it with a variety of healthier snack options including fresh fruits and vegetables, yogurts and cheeses.

For years I was skeptical of foods like veggie burgers, kale and quinoa. Then I tried some of these non-typical foods and decided they were pretty good. However, I’m lucky if I can prepare mainstream foods well. Cooking a meal with something I’m not familiar with wouldn’t likely yield successful results. We had the opportunity to try out a variety of Veestro products that would be shipped to us so I figured it was worth a try. Their focus is on providing 100% plant-based, organic, gourmet foods delivered to your door. 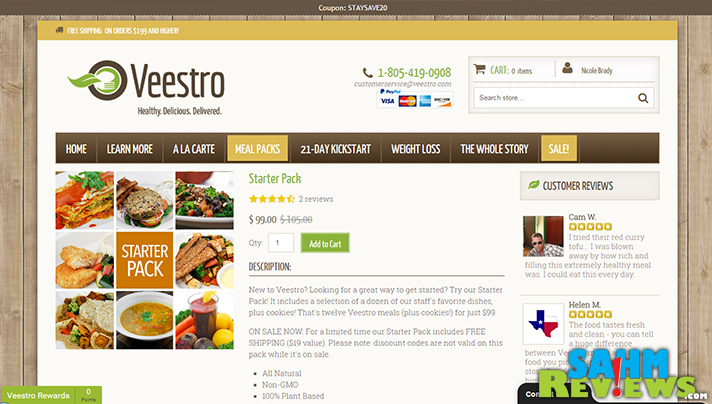 The process for ordering was very simple. First, I had to decide if I wanted to purchase packages or a la carte items. The packages include themes such as “Juice Cleanse” “21-Day Kickstart” and “Weight Loss.” Veestro also offers meal packs such as a starter pack of their most popular items, a gluten-free package and a high protein kit. Because I wanted to try a variety of items across the various lines, I went the a la carte route. 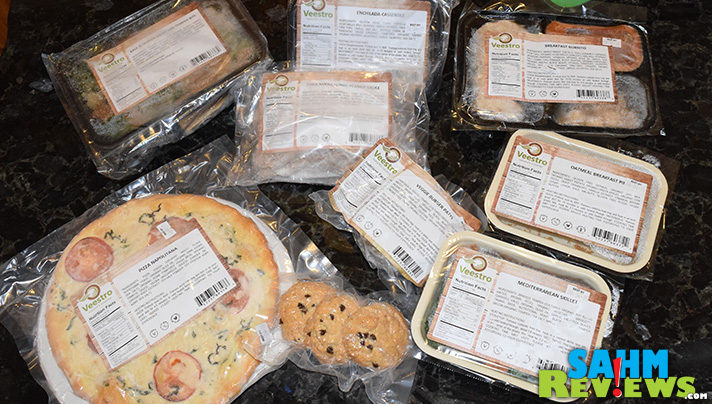 I decided to select items that were different from what I would normally make yet traditional enough that I wouldn’t be overwhelmed by something too new. I opted for an Enchilada Casserole, Soba Noodles with Peanut Sauce, Veggie Burgers, Kale and Quinoa Salad, Mediterranean Skillet, Pizza Napoletana, Oatmeal Breakfast Pie and a Breakfast Burrito. Oh, and Gluten-Free Chocolate Chip Cookies because I love cookies and don’t make them very often. I can, I just don’t. I’ll eat them all!

They arrived packed in dry ice and went straight to the freezer until I was ready to use them. Over the coming days, we all tried the various items to see what we thought of these gourmet, plant-based meals. 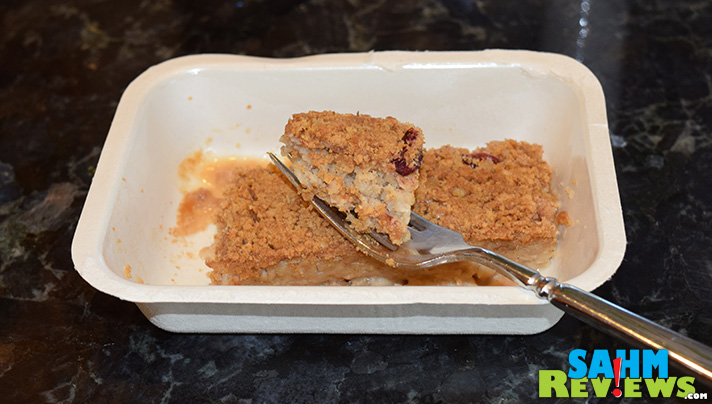 The first one I tried was the Oatmeal breakfast pie. I like oatmeal. I like pie. That was sure to be a winner. I’ve had breakfast casseroles before and different types of oatmeal bakes so I had a good idea what this would be like. The directions indicated it could go in the microwave or in the oven. I opted for the quicker version to accommodate my crazy schedule.

It cooked up easily and came out mostly as I expected. The flavors were very good although a bit dry. I think the last time I had one of these it was served with a little bit of milk or cream over it. That would have worked perfectly here. 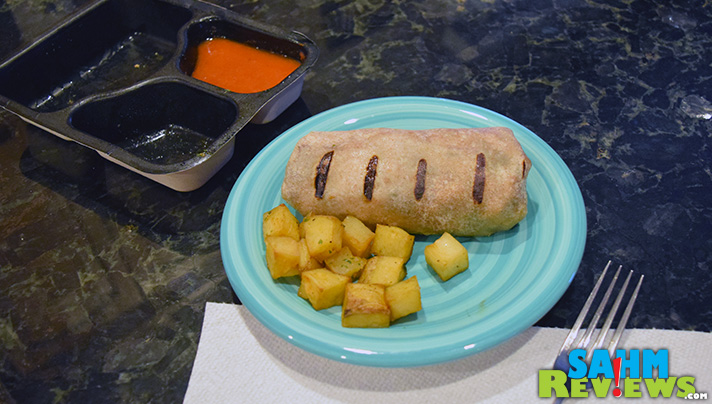 On a different morning, I opted for the breakfast burrito. Scott and I both felt the flavors were very good with more than enough of the sauce to spoon into burrito while eating. Despite not liking other prepared tofu products, this one worked for us. 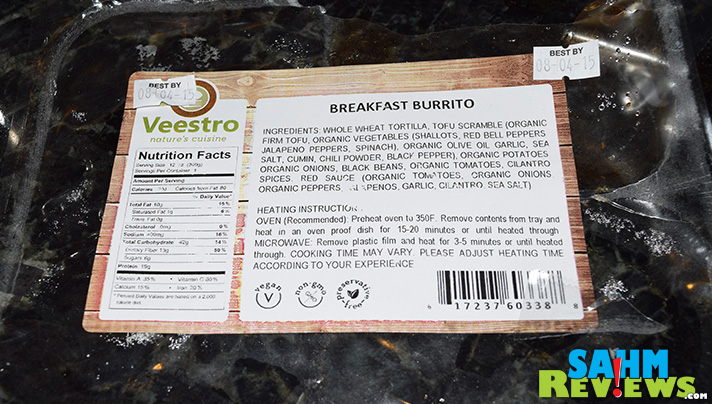 What I discovered is that these aren’t designed to be fast, frozen meals. The microwave isn’t the ideal cooking method. For both the burrito and the oatmeal bake, preparing them in the oven would have been a better choice. I actually had to return the burrito to the microwave because the inside hadn’t thoroughly cooked. Unfortunately, that meant the outside was so hot that we couldn’t even pick it up. Veestro meals are designed to be frozen and can yield good flavors from the microwave, but preparing it in the oven will provide a better texture and thorough cooking. 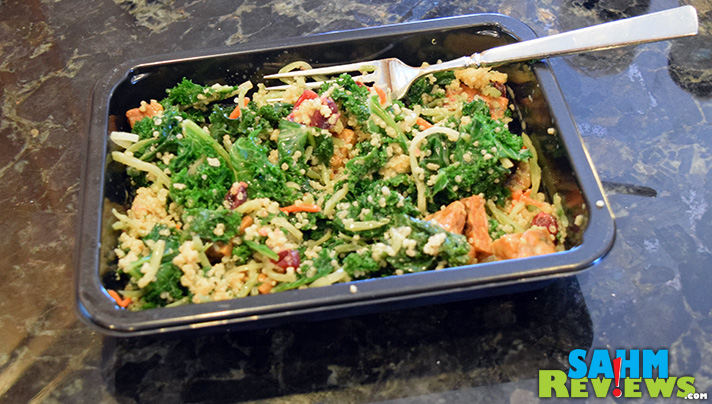 Let’s talk kale for a minute, can we? An quinoa. Those are two of the trendiest ingredients and I’ve discovered there’s an obvious reason for that. They’re good! This Kale & Quinoa salad was delicious. All I had to do was leave it in the fridge overnight to thaw, then open it, add the included dressing and enjoy. I wasn’t a fan of the ingredient that replaced chicken but other than that it was one I would definitely order again.

The pizza was good but could have used more sauce. It cooked up nicely in the oven and the kids even ate it. I saved a few pieces to eat cold (because I like cold pizza) and thought it was even better that way! There wasn’t anything that I ordered that I didn’t eat and enjoy. Considering it is all plant-based and healthy, that’s really a good thing.

When you glance over the menu, you may get a bit of sticker shock. However, if you price organic, Non-GMO or Gluten-Free items at the store then you’ll realize these prices aren’t far off. Prices for frozen food services such as Schwan’s that have trucks that deliver to your neighborhood are very comparable as well.

If you’re looking for some healthy alternatives or just need to change up your menu a bit, then check out the variety of options on the Veestro website. Be sure to visit them on Twitter and Facebook to see if they have any promotions running.

Then before your package arrives, be sure to dig through your freezer and get rid of all the old food you had forgotten was in there. You’ll be glad you did.

Have you ever purchased frozen foods through a mail-order service? 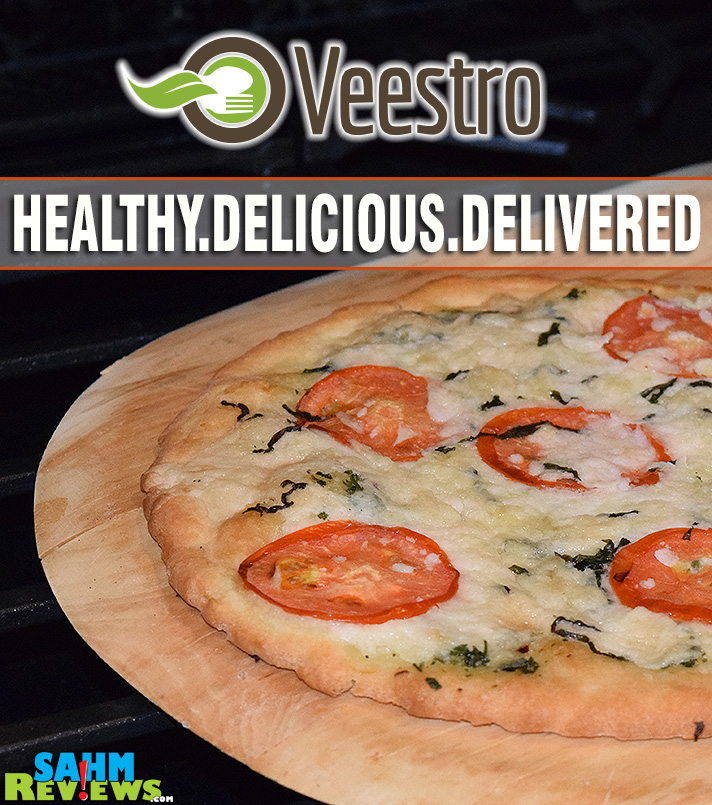