We’ve found so many great games at yard sales and thrift stores this summer that we decided to show you more than the typical one per week! For the next 10 days we’ll introduce you to a Thrift Treasure that you’ve probably never seen or heard of before. For our second feature, we bring you the Turn About Peg Puzzle by Drueke Blue Chip Game Company. 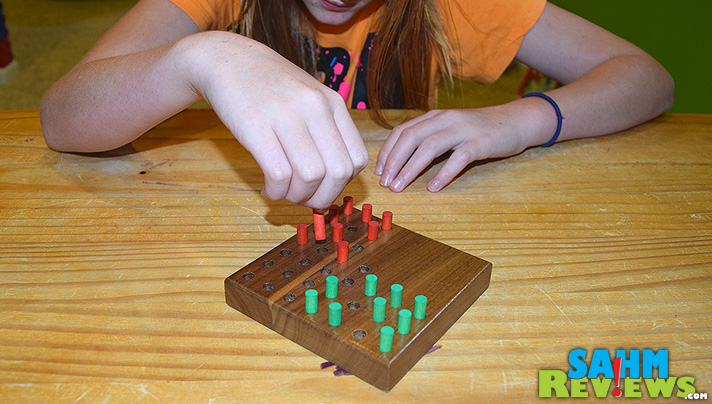 If you’ve ever played Chinese Checkers, then you’ve played Turn About. The object is the same, move your pegs one at a time to ‘switch places’ with your opponent’s pegs. You can move them forwards or sideways, but not diagonally. If there is an open space, you may also jump a peg of either color (and continue to jump if the path allows it) to move towards the other player’s base. 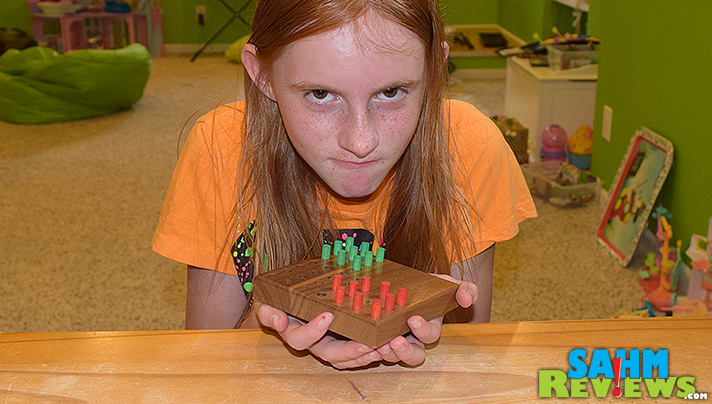 And that’s really all there is to it. There are a couple different strategies to employ:  Do you rush the opponent’s base? Hold one back to try to stall? Exactly the same game as Chinese Checkers, but in a convenient 2-player form factor.

The Drueke Blue Chip Game Company was founded in 1971 and continued making games until 1987 when they were sold to a company called Low Tech Co. A couple years later all Drueke assets were then sold to The Carrom Company of Ludington, MI. This particular game appears to be from the early 70’s, although we couldn’t find solid information online about it. The Carrom Company is still around, but appear to focus mainly on game-room type table games such as air hockey, foosball and the like. If you want a copy of Turn About Peg Puzzle for your collection, you’ll have to do like us and dig one up at your local thrift store or yard sale!