Shortly after we were married, my husband was offered a job in California. Being young with no house or children to be concerned about, we decided it was an ideal time for us to take a chance. He would go out ahead of time and I would remain in Iowa for a few months to wrap things up. We packed his car full of things he would need to live in a hotel for a month then hopped in and headed west.

Our last place together was Las Vegas, where we would part ways and hope for the best. My flight back to Iowa wasn’t right away so we decided to make the best of our last time together. It was our first trip to Vegas so obviously we wanted to gamble. The only problem is that I’m cheap and didn’t want to lose the little amount of money we had set aside. As luck would have it, we discovered that bingo is a great way to make a few bucks last a long time. Binion’s Horseshoe Casino offered sessions that lasted a couple hours and it cost you less than $10. Help-yourself popcorn and hot chocolate were available, too.

I think it was the second game we played that I actually won. To my surprise, I was given the option of taking the set amount of cash OR going into a cash booth and grabbing as much cash as I could. I always wanted to go into one of those… and that’s exactly what I did. I managed to grab over $400.

Needless to say… I was hooked. We spent so long in that Bingo hall that DH was starting to get the shakes from no food and too much hot chocolate. Bingo has been a favorite game for us every since and on our to-do list on every subsequent visit to Vegas… or anywhere else that offered the game. If they serve refreshments, we always ask for hot chocolate and popcorn. They are synonymous with bingo to us.

I had to giggle last night when I was asked if I wanted to review a bingo app called Bingo Bash. It reminded me of that trip so very long ago. The irony of the matter is that I had popcorn for lunch (we went to a movie yesterday) and made the girls hot chocolate in the afternoon after they had been outside playing in the snow. So yes, I downloaded it. It was free, you know?! 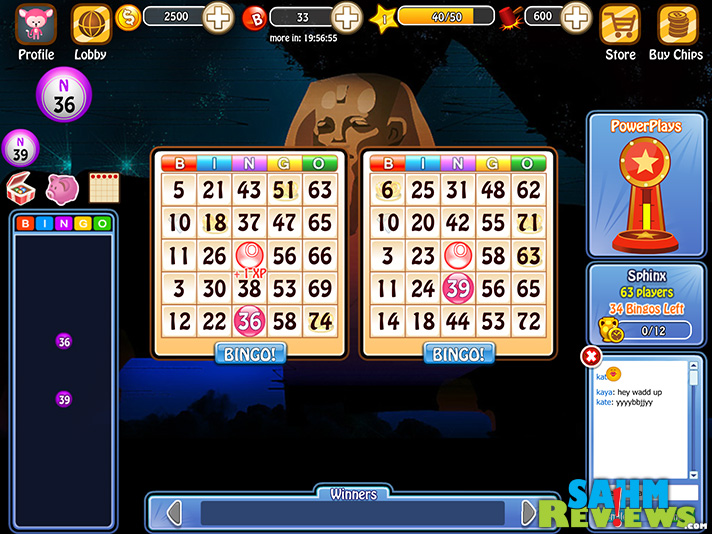 The first thing DH said when I buried my head in the game was “You’re going to regret downloading that, aren’t you?” No, dear. I’m not. It brings back fond memories, thank you. I started with just two cards. One thing I certainly remember is that my brain cannot process too many cards at once. I played a few times and to my surprise, I won!

Just like in real bingo, you can play a single card or multiples. In this case, up to four. There are options to power up and earn bonuses and all kinds of other stuff but I like it simple. I tried four cards and felt like I couldn’t keep up! 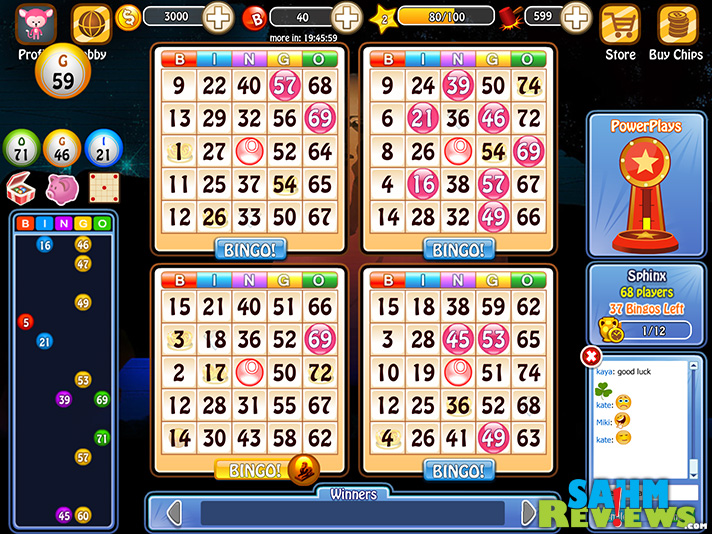 As you play, you’re rewarded with higher levels and the ability to enter different rooms. As an example, they have a Valentine’s room right now that requires level 21. The different rooms have different themes (like sweethearts meeting on the bridge) that make each level unique. New levels are released often to keep things interesting and there are currently over 341! They even have sweepstakes where players can win Amazon gift cards!

If bingo is your thing, then check out Bingo Bash from BASH Gaming. It’s available for FREE download on the PC through Facebook, via Amazon for Kindles, through iTunes for iPad or iPhone and also available through GooglePlay for android devices.