Skip to content
It’s that time of year when we need to register for new activities. The girls are young so we try to rotate the activities and expose them to a variety. This fall, both Miss M and Miss K will be participating in soccer and swimming. Despite my love of dance and my desire to have them follow in my footsteps, I didn’t enroll them this year. All last year they did ballet and tap culminating in a spring recital. But I don’t want to burn them out at such a tender age. There are plenty of years and opportunities to get involved.
The girls do take after me in that they love to dance. When Stephanie and Mary Kate were

looking for people to review Prima Princessa presents Swan Lake, I emphatically waved my digital hand in the air yelling “Pick me! Pick me!” If you have girls, you might have already heard of Prima Princessa. If not, here’s the gist – It’s a hybrid presentation on DVD. Part entertainment, part education. It may be more appropriate to say that it is education under the guise of entertainment. It consists of a presentation of Swan Lake by The Paris Opera Ballet broken into acts. The acts are further broken up by mini ballet lessons explaining and demonstrating different ballet moves. The entire DVD is narrated by a youth-friendly voice and cartoon fairy princess. 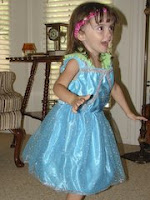 We were visiting my MIL in Alabama when I pulled out the surprise DVD for the girls to watch. I told them it was ballet and they immediately started to dance around. Even as I popped it into the DVD player and started it up, they continued their energetic twirling. I figured they were too wired and not even paying attention. Apparently I was wrong because the second the narrator said “In between each act, you get to dress up in fun pretty tutus” they tore out of the room. 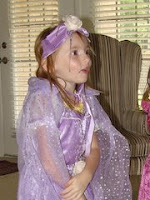 I paused to see what the commotion was about, only to find that the girls had raced into the guest room and began to frantically rummage through the chest of dress up clothes that Grammy had purchased for them. A minute later, they returned to the family room all decked out and ready to watch. 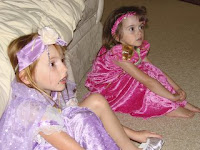 Their mouths dropped open and they were mesmerized. Not only did they pay attention to the ballet, but they asked appropriate questions: Miss K – “If he don’t (SIC) find her, what’s going to happen?” They also repeated the tutorial words like “Peer-oh-ette” and mimicked the student dancers. I tried to take a few pictures but was chastised by Miss M when I tried to get her to hold still for a snapshot. “Mom! I’m a Swan!”

When it was over, Miss M said “I really liked it” and they both exclaimed in unison 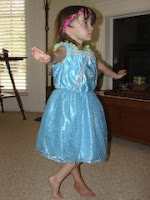 “I want to do it again.” Which they did. Even when my BIL stopped by, they insisted on retelling the story and firing it up again so he could watch it.

Well, as I typed this review (back home again), a neighbor showed up with her 4 year old daughter and 18 month old son, along with two 4 year old girls she was babysitting. After playing outside for a bit, I invited them in and we popped in Prima Princessa presents Swan Lake. If you could only have seen our family room filled with 6 children dancing along with the ballet and students!

The DVD was a hit with all the kids and I enjoyed it as well. I hate to admit that I’ve never bothered to watch any performance of Swan Lake so it turned out to be a learning experience for me too! I highly recommend this for any family with kids who love to dance.

Stephanie and Mary Kate were so kind as to offer an additional DVD to one of my lucky readers! WooHoo! As always, you’ll need to follow some rules to be able to participate. Thankfully, it’s easy!

One “Prima Princessa Presents Swan Lake” DVD valued at $19.99
Rules:
Participants –
… must be able to provide a United States mailing address.
… must provide an email in the first comment or have email accessible from their profile. If winner cannot be contacted immediately upon drawing, I will move on to the second random selection.
On August 18, a winner will be chosen at random (using random.org) from all comments left. I’m new to PRIZEYWinners, but I’ll be attempting to submit the winner to it!
How to enter:
For the first entry –
(1) Check out the Prima Princessa video clip.
(2) Come back here and post a comment with your thoughts about it – what you thought of the presentation form, the ‘characters’, whatever. Nothing generic like “I think my daughter will love it.” Irrelevant comments will be disqualified.
For additional entries –
(a) Add my button to your sidebar. Come back here and leave an additional comment stating that you did so.
(b) Add the Prima Princessa button to your blog. Come back here and leave an additional comment stating that you did so.
(c) Publish a post regarding this contest and link back to it. Come back here and leave a comment providing the link to your post.

Thanks again to Mary Kate and Stephanie for providing the prize for this giveaway and for creating a very fun and educational DVD!