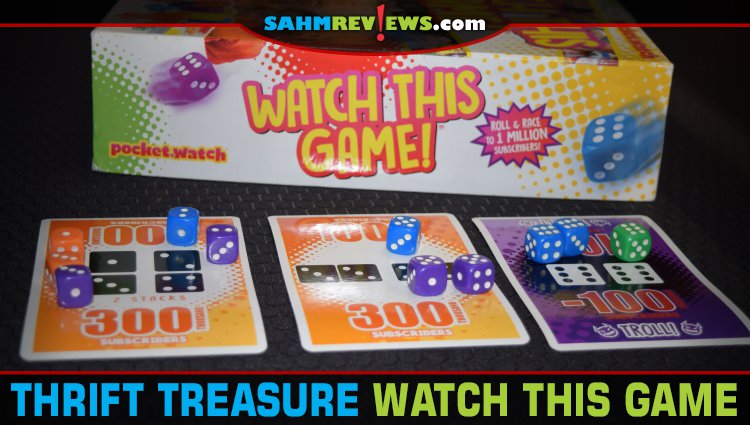 Unbelievably, we pass on quite a few games at thrift. There are just too many knockoffs, variations of Scene It and Trivial Pursuit, and incomplete games available. Some just don’t look fun or might be targeted at a much younger age. Even while we were at Geekway to the West, we passed on quite a few at their flea market.

One I set back down after reading the box was Watch This Game by Buffalo Games. It was too much like a couple of other games in our collection – Roll for It and Farkle Around. We’re especially fond of Roll for It as we have known the designer for the better part of a decade. It’s also one our daughter chose to bring to college to help introduce classmates to the world of hobby games.

The more I thought about it, the angrier I got. Watch This Game sounded EXACTLY like Roll for It. I decided to swing back around the flea market and grab it for $2. Sure enough, it was almost a complete copy of the award-winning dice game. What bothered me more is that it was published by a company that should know better.

I don’t pretend to know how the deal went down, but it appears to have been facilitated by a company called Pocket.Watch. Their specialty is to contract with underaged YouTube stars and attempt to make them extra-famous by licensing their names and images to various products. Whether it was one of the kids, this licensing agency or Buffalo Games who produced the game, there is zero doubt it was inspired copied from Roll for It.

Both games are the same with the exception that in one you earn points, while in the other you collect subscribers. Each game has you rolling your own colored dice and trying to complete the requirements from a tableau of cards. Be the first to finish a card and you can collect it. Your dice are locked on the card until it is complete and only then can you get them back.

The only difference we can see is where Watch This Game added a few special cards. These were meant to slow down your opponents. When you complete these cards, you can play them on another player. These will subtract from their total, force them to complete the card again before proceeding or even discard all previously earned cards! Fighting over the same card is mean enough, but the addition of these special cards makes the game downright evil. And that translates into “NO FUN”.

Even though it was just published in 2018, Watch This Game proved that the market would decide what is fun or not. Fortunately, it is no longer available new. Its only redeeming feature is if you find a copy for a couple of dollars at thrift or on eBay, it’s worth picking up for the dice to use in a real game.

Do you hate it when games steal ideas from other games?