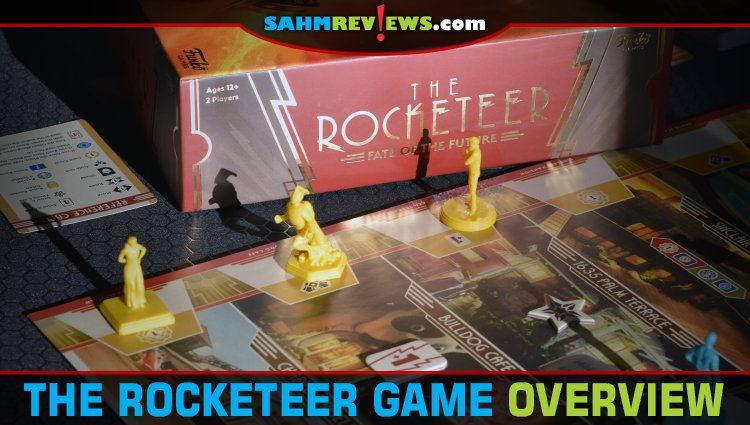 The Rocketeer Board Game Overview

Games and movies have enjoyed crossovers for quite some time. It isn’t uncommon for a blockbuster release to have a board game hit the shelves at the same time. Wakanda Forever is a good example of a game that could be enjoyed right after a viewing.

Then there’s the shows which are still popular ten, twenty, or even thirty+ years later. From Anchorman to Bill & Ted and even Back to the Future, solid releases will spurn fandom well into the future. In 1991, Joe Johnston’s The Rocketeer was released. It featured several well-known actors and actresses, including the recently passed Paul Sorvino. As our own tribute to his work, we have been playing the new The Rocketeer: Fate of the Future board game by Funko Games.

The Rocketeer: Fate of the Future is a game for only two players. One will play as the Heroes and the other as the Villains from the movie. Each takes the matching reference card, and the main game board is placed so the appropriate side is facing the correct player. Both receive three character boards and place them all on the table. Various tokens and cards are organized and set within reach of both players. Each side also takes their 36-card deck and shuffles them, drawing seven into their starting hand. Lastly, the Hero player receives three blueprint cards. Two are dummies and one is real. The Hero puts one face-down by each character board.

During a game of The Rocketeer: Fate of the Future, you will be fighting for those plans (blueprints) because the fate of the future depends on it! You will be collecting Finale cards, which are added up at the end of the game to determine the winner. These plans help you earn more.

A round of The Rocketeer: Fate of the Future has four parts. First you will reveal a card from the Current Events deck and resolve it. These may cause the Zeppelin to move closer to Los Angeles (the game’s timer), will introduce a round-specific rule or event and then tell you where to place the Finale token for this round.

Secondly, players will take turns playing their characters one at a time, starting with the person holding the plans. Using cards with matching character symbols, you can play as few or as many as you like for that character. The bottom half of the card gives you your options – take the action on the left and activate each symbol in order. These will earn you (income) like Grit or Clout or allow you to Tussle (fight) or even move across the board. Or spend the listed requirements (usually Clout) and take the extra powerful action on the right side.

The two sides aren’t the same. The Heroes have Cliff Secord, who possesses the rocket pack. This allows him to move more easily around the map. Villains can recruit additional soldiers into their Secret Army. This slightly asymmetrical arrangement means you’ll want to play each side to learn their strengths and weaknesses.

Once all six characters have taken one turn, players gain rewards for controlling the various areas of the board (majority control). The rewards are printed in the center of each section. These may vary depending on which side wins the area (Heroes or Villains). The player who controls the plans at this point also receives a Finale card. Another round starts with players discarding any cards they don’t want and drawing back up to seven in their hand.

Just like the movie it is based upon, The Rocketeer: Fate of the Future holds up even though it has been out since late last year. It is a great tribute to a great movie and more strategic than most two player games being made today. You will find your copy on Amazon, at your favorite local game store or direct from Funko! Be sure to follow them on Facebook and Twitter to find out what other classic stories they’re planning to make into games!