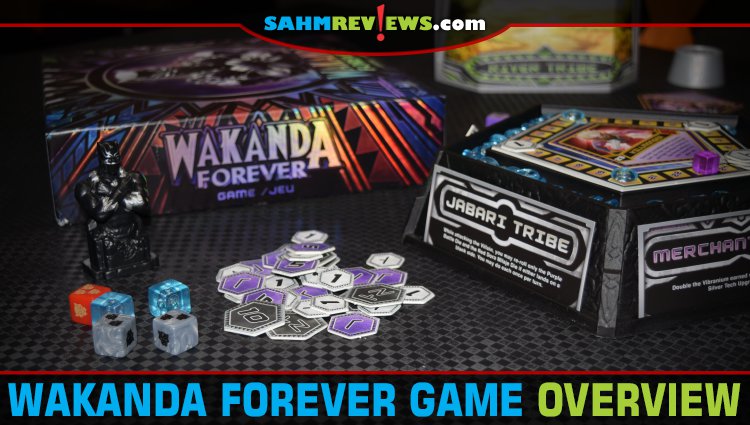 You don’t have to be a Marvel fan to be aware of the recent death of Chadwick Boseman, the actor who portrayed Black Panther in the Marvel Cinematic Universe. He was a phenomenal actor who was cast in leads for movies about Jackie Robinson, James Brown and Thurgood Marshall. His 2016 diagnosis was a closely guarded secret as he continued to fulfill commitments so it came as a complete shock when he lost the battle earlier this year. Sadly, we were scheduled to interview Mr. Boseman in conjunction with the 2016 premiere of Captain America: Civil War, but he was unable to attend due to illness. It’s a strong reminder that we never know what challenges others are dealing with in their lives. During Disney Investor Days last month, it was confirmed that Marvel Studios will not recast his part. Instead they will explore other Wakanda characters for the July 2022 release of Black Panther 2. I’ve also noticed that promotion of Black Panther licensed products is being suppressed out of respect of the actor’s passing. That doesn’t mean we cannot enjoy the works that he has created nor should it mean we cannot play games about Black Panther like Wakanda Forever from Spin Master Games. 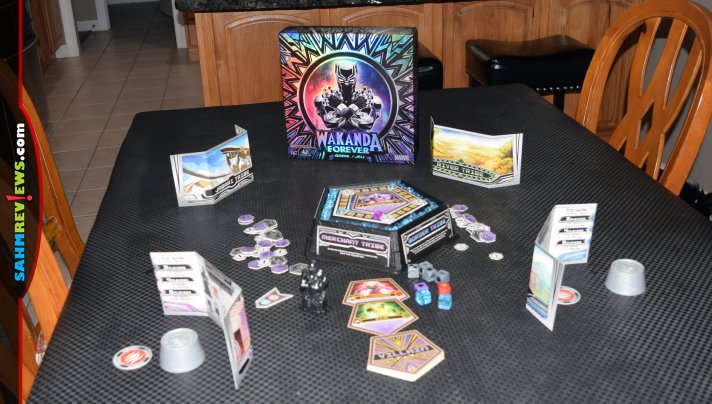 So let’s look at what the game entails and see if we can pay tribute to the great T’Challa by collecting Vibranium and defending Wakanda from villains. Each player selects a tribe and takes the associated mat and player screen, a silver cup and voting disc. Place The Great Mound tray in the center of the table then each player inserts their mat on the side of the tray facing them. Pour the Vibranium Stones into the recessed areas of The Great Mound. Shuffle the Villain Cards then place one on the top of the mound, adding the health tracker cube, Vibranium and point bonuses in the designated spots. Set two additional Villain Cards face up next to the board and the remainder in a stack alongside those. Create a general pool for points. Each player rolls two dice to determine their starting Vibranium stash with the person who earned the least becoming the first Black Panther. 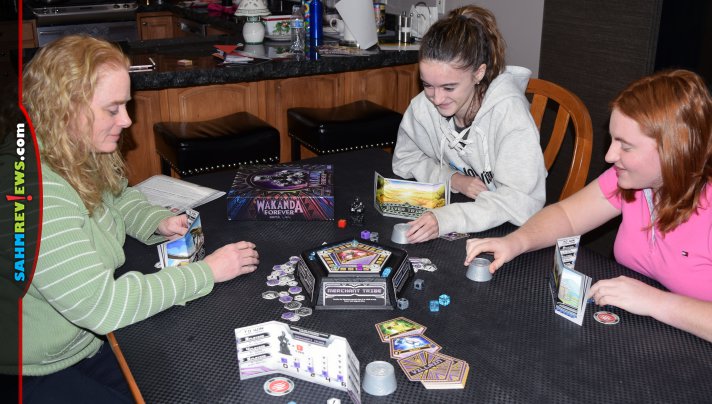 The idea behind Wakanda Forever is that villains are lining up and attacking The Great Mound. Players are acting as warriors of Wakanda, vying for the role of the leader, mining for Vibranium and earning Wakanda Points in the process. The general game flow is that players use the Vibranium dice to mine for goods, spend Vibranium to power their weapons then roll dice to defend Wakanda against the villain. Finally, players each cast a vote to either challenge Black Panther for leadership or support his continued reign. 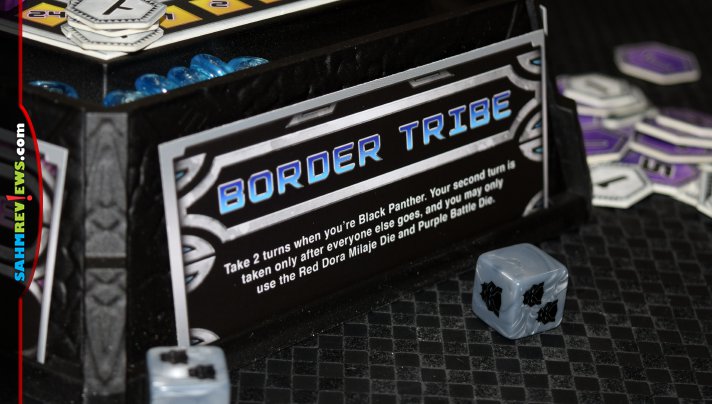 Throughout the game, each player should leverage the bonuses of their tribe. They include earning additional Vibranium during mining or battle, taking an extra turn while maintaining the role of Black Panther, re-rolling blank dice during battle and having an advantage during ties.

At the beginning of each round, you check to see if there’s a villain attacking. If not, move the next villain to the top of The Great Mound and set the tokens in place. The villain card identifies which tribe it will be focusing its attention on. Place the villain token in front of the player who represents that tribe. They’ll have limited ability to mine during their turn until that villain is defeated. Beginning with the player to the left of Black Panther, players take turns rolling the Vibranium dice and collecting the related amount from the mine.

Next, each player secretly determines how much Vibranium they want to use to power their weapons for battle. Between zero and six Vibranium are selected and placed under the cup. This will determine how many dice each player gets during their attempt to defeat the villain. Beginning with Black Panther who also has access to the red Dora Milaje die, players will roll their designated weapon dice to damage the villain. Each hit earns the player Wakanda Points. Whenever the damage causes the health marker to pass by one of the bonus spots, that player also collects those points or stones.

Whenever the villain is defeated, the player who dealt the final blow earns 3 bonus Wakanda Points then the villain card is placed in front of the current Black Panther. That player will have the villain’s bonus for the remainder of the game. 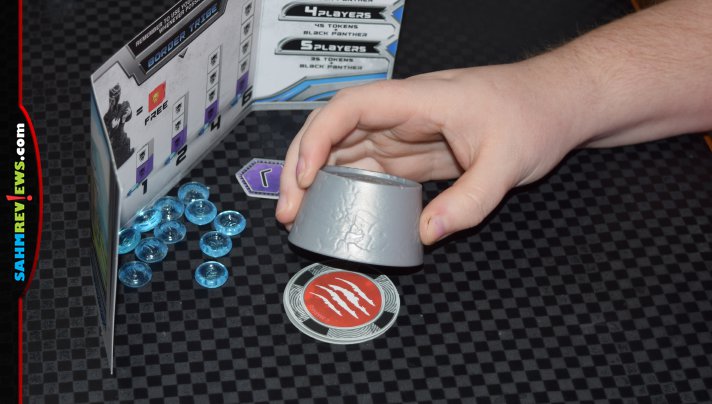 Finally, players use their voting tokens to decide whether they’ll continue to support the reign of the current Black Panther or challenge to take over the throne. When you yield, you earn one Wakanda Point. When you challenge, you’ll roll dice with powered up weapons (like during the battle with the villain). The winner of the challenge becomes the Black Panther for the next round and play continues. While there is some strategy involved when deciding how much Vibranium to use and whether to challenge for leadership, ultimately there’s a LOT of luck involved in this game. The first player to achieve the designated number of points while ruling the country is declared the winner.

Companies are issued intellectual property licenses for a limited amount of time so it’s not uncommon for something like Star Trek Panic or the many other licensed games to no longer be printed once the license runs out. Since Wakanda Forever is no longer on the Spin Master Games website, I suspect that once it sells out on Amazon, at Walmart, local game stores and elsewhere that Black Panther fans will have limited access to the game via the secondary market. So if you’re a fan of the franchise, don’t wait to grab this game! See what other properties are in Spin Master’s lineup by checking them out on Facebook and Twitter.

Who do you think should be the star of future Black Panther films?