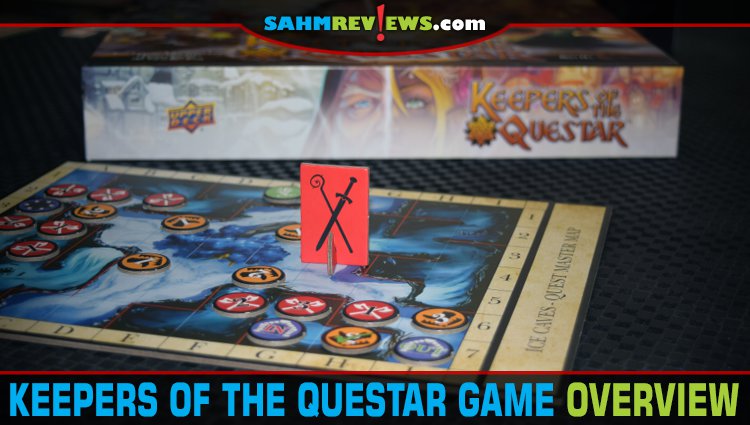 Thinking back to my youth, there are a number of games that stand out in my memory. We played a lot of cards including Spades, Hearts and Euchre. I remember my parents teaching me Pinochle and it was where I honed the card-counting skills that I learned from Spades and Hearts. Fierce battles of Risk with my brothers are also a highlight. While visiting my out-of-town cousins, I fell in love with The Electronic Detective, a deduction game with a completely different feel than another favorite deduction game, Mastermind. One of the pitfalls of that game is that you have to take turns being the person guessing. I was great at the game and my turns as the codebreaker were far shorter than the role of codemaker. That’s something I really disliked. When I learned about Keepers of the Questar from Upper Deck, I was thrilled to discover that both players simultaneously take on both roles. Brilliant. 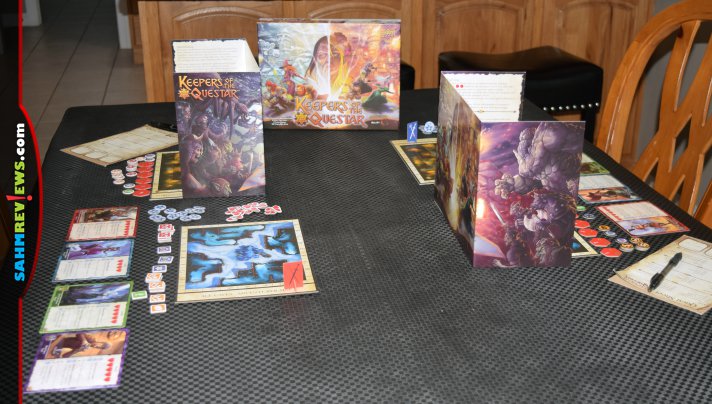 Instead of trying to decipher the colored pieces behind the screen, you’ll be partaking in a D&D style dungeon crawl in hopes of dodging traps, avoiding monsters, and discovering the legendary Questar. To set-up this two-player game, give each player a privacy screen, a quest pad, a token bag and a set of tokens. Take turns selecting the map you want your opponent to explore and place it behind the screen. 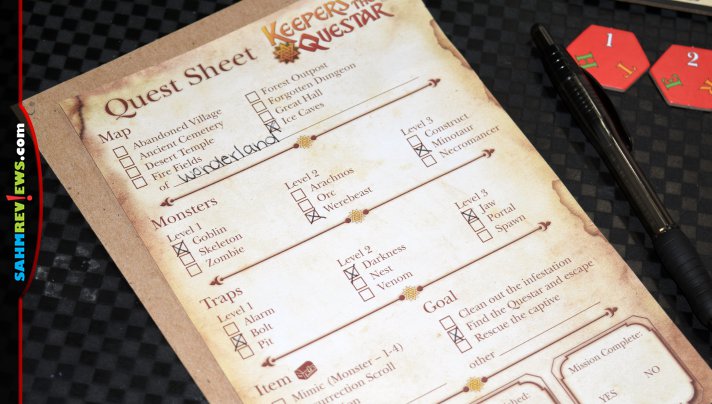 Each opponent will set their copy of their assigned map alongside their screened-in Quest Master map. You’ll each use the quest pad and go through the process of creating your own dungeon. Determine the location of the entrance and exit then populate your Quest Master map with monsters, traps and various items. 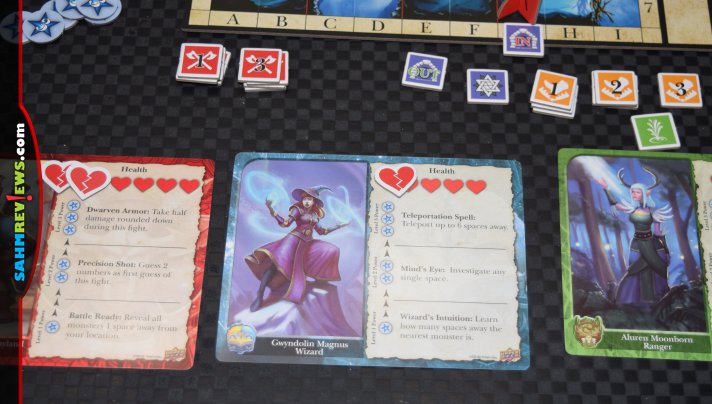 In order to adventure, you need to select your party! Either have opponents select teams for the other person or take turns drafting characters. Each Adventurer card depicts that character’s total health, class, portrait and unique abilities. Once your party is ready, it’s time to tackle the dungeon! 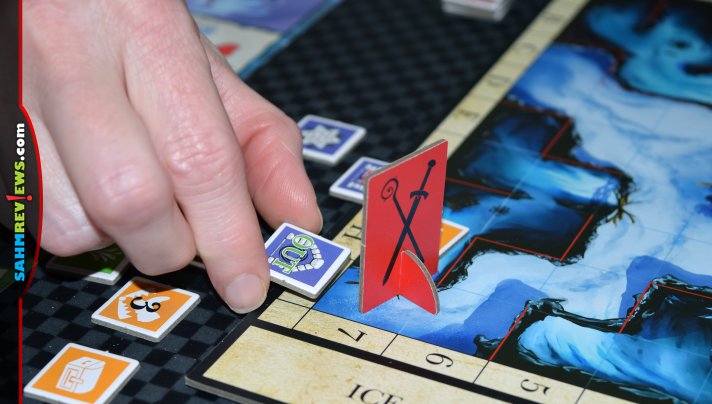 Players will take turns acting as the adventurer and the dungeon master. On your turn, you’ll choose to explore or rest on your adventure map. Spend exploration points to move or investigate then resolve anything you may encounter. Investigating may use up some of your actions each turn, but it allows you to get a glimpse of what obstacles may be ahead. As an alternative, spend exploration points to rest and heal. Before ending your turn, move a Monster on your Quest Master Map then the next player gets their turn. 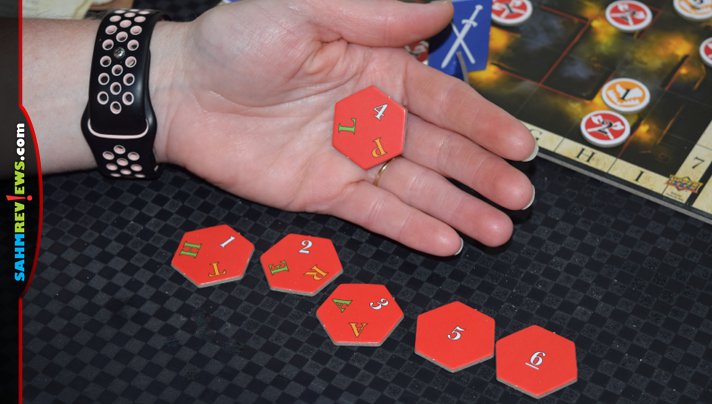 When you investigate, your party stands in their current space and examines one of the spaces next to them. The cost is one exploration point and the Quest Master must tell you if there are any tokens in the space you are investigating. If you choose to Move, spend one exploration point to move the entire group one space orthogonally. If you happen across a trap or monster then you’ll need to resolve that encounter.  When a trap is triggered, attempt to disarm it! The Quest Master selects one of the T-R-A-P tokens. The adventurer attempts to guess which one was selected. The trap is disarmed with a correct guess, but an incorrect one causes one of the adventurers to take damage. 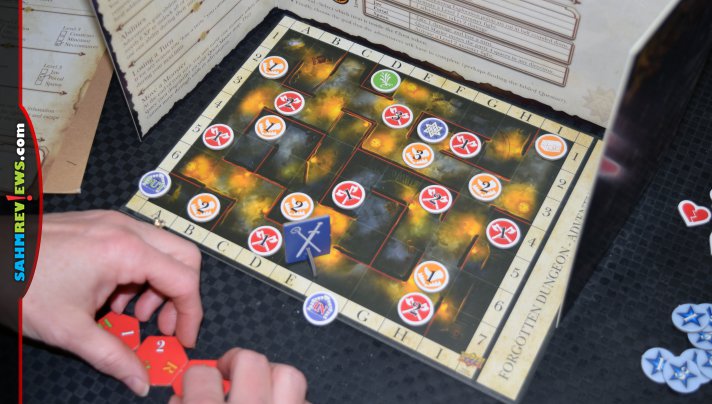 Happening across a monster forces the party to engage in battle. Each player selects one of the damage tokens for that monster’s damage range then the adventurer reveals their selection. A match means the monster is defeated and the adventurer gains XP equal to the monster’s level. Incorrect matches cause damage! Someone from your party will take 1 point of damage. The adventurers selects another token (Quest Master uses the one already selected) and the process continues until either the monster or the player are defeated. If your adventurer takes a lot of damage before defeating the monster, you’ll want to take your next turn to rest and heal utilizing the H-E-A-L tokens to guess for heals (the same selection process as with the T-R-A-P). 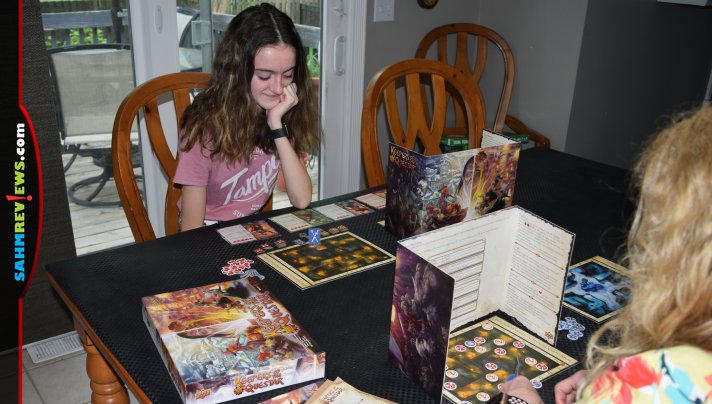 As the party continues to defeat monsters, they will level up their abilities which can be used during future turns. You’ll continue to adventure until one of the players completes the pre-determined goals and escapes through their dungeon’s exit portal.

Two sets of Keepers of the Questar can be combined to accommodate up to four players, but note that you’re designing a quest for the person on your right while adventuring through the one created by the Quest Master on your left. It gives the game a different feel as you aren’t going head-to-head with any one player. While that works for some people, I’ve played many games like that and it definitely impacts my experience. I find myself jockeying for seating to avoid that conflict. Regardless of player count, one of the biggest benefits of Keepers of the Questar is that it can act as an introduction to the concepts of creating a diverse party and taking on different obstacles and monsters in a dungeon. Definitely a stepping stone to more advanced dungeon crawler games. Take on the adventure by picking up a copy at your local game store, direct from Upper Deck or from Amazon with Prime Shipping! While the pandemic has certainly forced game publishers to adjust their release schedules, that doesn’t mean they are skipping the year. Tune into Upper Deck’s Facebook and Twitter channels for updates! Thanks to the team at Upper Deck for providing a copy of Keepers of the Questar for one of our readers. Will it be you? You’ll need to take your chances with the Gleam widget below. At least there aren’t any monsters or traps!

25 comments on «Keepers of the Questar Deduction Game Overview»