♪ ♫ “Over the river and through the woods…” ♫ ♪ Is it too early to start singing that? Hey. We’ve moved past Halloween and have already had snow on the ground. I’m not really ready for the holidays, but when we played The River the other day, this song was an instant earworm. So clearly my brain is more ready for Christmas than I care to admit. Did I sing the song while playing? Thankfully, no. The peanut gallery would likely agree with that comment… 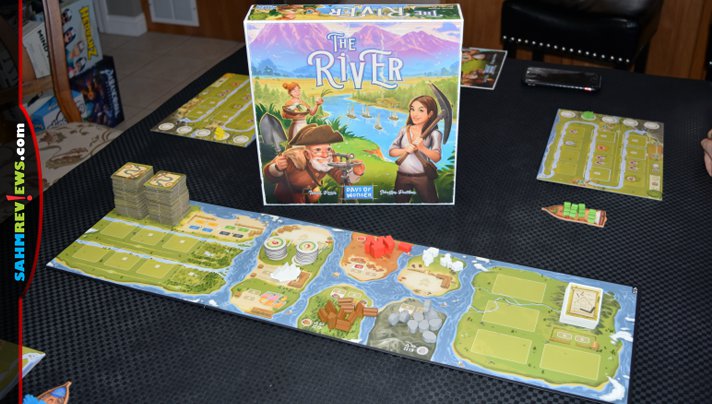 The River by Days of Wonder is another exploration game. Unlike Space Park where your journey takes you into outer space, The River is about a trip down… a river. With many games of this genre, you earn more resources and workers over time. However, you can expand your territory to find new lands, but you’ll sacrifice some resources and people in the process. The game is designed for 2-4 players with a double-sided board that accommodates 2 players on one side and 3-4 on the other. 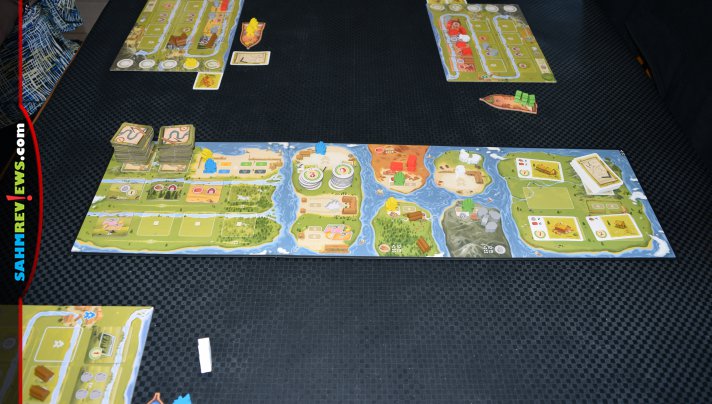 Place the main board in the center of the table with the appropriate side up then give each person a player board and the associated pioneer meeples and boat. Shuffle the Terrain Tiles and stack them on the matching spot on the main board, flipping over enough tiles to fill the spots marked with a setup symbol. The Building Cards are shuffled and placed on their spot on the board as well. Add bonus tokens to the board according to the instructions for your player count. There’s some initial tile selection that helps start your journey, but let’s jump to the details of what happens once the game is up and running. 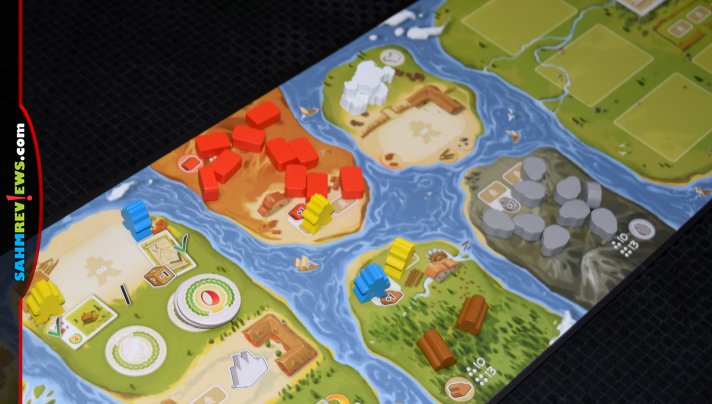 On your turn, you’ll take one of the pioneers from your boat and you’ll send them off into the land to gather resources, lay claim to land or build. The resources you acquire can be stored then used to construct buildings. Beware, there are limited number of resources and as well as a limited number of spots for pioneers to work. The amount of resources you earn is not only based on whether you arrived at the location first, but also the number of icons showing on your individual player board. I’ll explain that more in a minute. 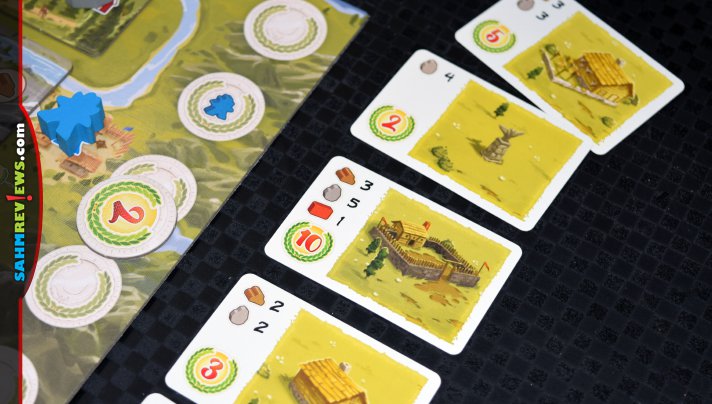 If you have the resources available, you can assign a pioneer to build. If you think another adventurer is planning to construct the building you’re aiming for then you may send off a pioneer to lay claim to the building card until you’re ready to complete it. 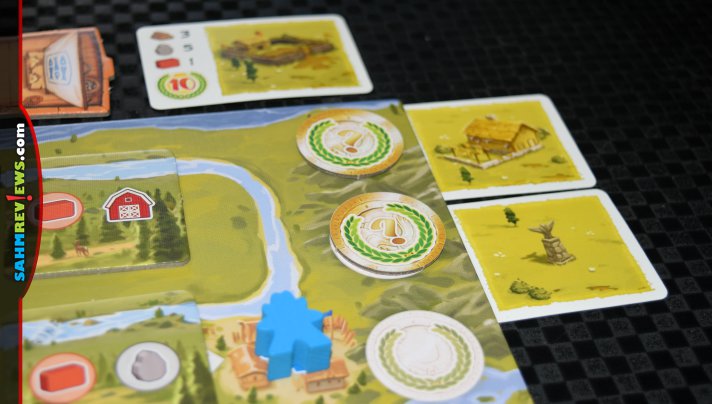 When you construct a building, you’ll earn the victory points referenced on the card as well as additional points based on the speed at which you completed it. These cards and bonus tokens are stored alongside your player board with the values hidden until the end of the game. It’s worth mentioning that you’re limited on how many you may build so don’t rush out of the gate for all the easy ones! 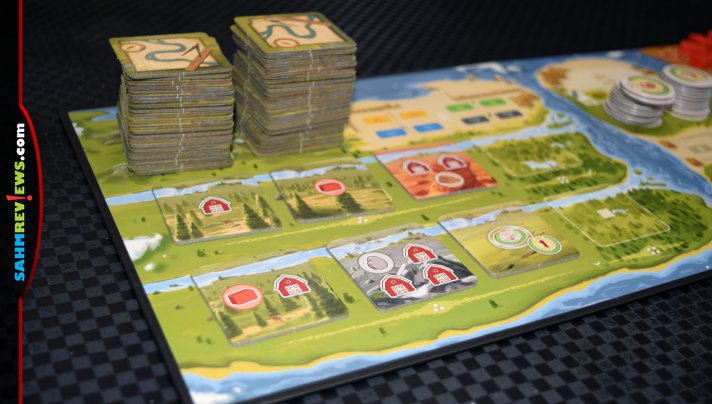 In order to traverse the river, you need to claim terrain tiles. Instead of producing resources, reserving buildings and constructing, you can opt to claim a piece of land. Each tile includes one or two of five backgrounds (desert, badlands, forest, meadow, mountain) along with some type of function (production, storage, immediate resources or end-game points. 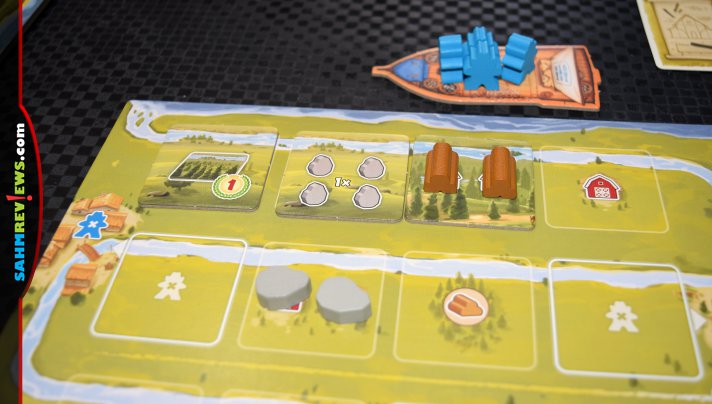 All these action options correlate to something happening on your individual player board. You know, the one with your river that you’re trying to traverse. As an example, when you collect resources, you must have a place to store them. As I said before, the amount of resources you may take is influenced by the number of spaces that resource is shown on your player board. Whenever you take a terrain tile, you’ll add it to your board and cover up the pre-printed feature beneath. In some cases, that means you’ll earn less resources than you had in prior rounds. As you continue, you’ll actually lose pioneers who are tasked with taking care of the lands and buildings you’ve claimed.

To make things even more interesting, you’ll earn points based on how well you’ve arranged your lands. In addition to the points you earn for the buildings and end-game terrain tiles, you also score victory points for columns of similar terrain types. There is a field on the board to swap the locations of two terrain tiles, but you have to send a pioneer to do that job. There aren’t a lot of ways to earn points so it’s important to maximize wherever you can! 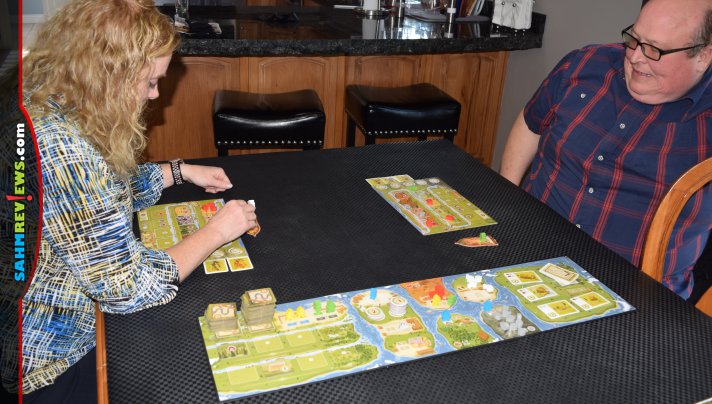 After players have used all the pioneers in their boat, you do a cleanup phase, adjust the first player if someone has selected that field on the board, refill the building cards, clear and replace the terrain tiles then return all your pioneers to their boat. A session of The River ends when one someone has five bonus tokens on their board (meaning they’ve constructed 5 buildings) or has claimed their 12th Terrain Tile. Finish off the round and score!

The game is surprisingly simple to learn and doesn’t take very long to play. The fact that you lose people actually makes the later rounds go much faster than in a typical worker placement game. You can purchase The River from Amazon or ask your local game store if they have copies available. Explore Days of Wonder on Facebook and Twitter to discover their other games.

Have you ever traveled down a river?

1 thought on “The River Board Game Overview”