When I was a kid, my brother bought me a dictionary for Christmas because I was obsessed with doing different types of crossword puzzles in our local newspaper. I used to keep it readily available on the shelf and would grab it whenever I was stumped by a word I read or heard. Years have passed since I received that book and I no longer know where it is. Perhaps it was donated or is packed away in a box somewhere. Who knows. It’s kind of irrelevant since everyone grabs their phones or asks Alexa to look up words anyhow. When reviewing the rules for Tribes: Dawn of Humanity from Thames and Kosmos, it explains how each player is leading a tribe through three early epochs of human history and I asked myself, “What’s an epoch and how do you even pronounce it?” So I looked it up: “a particular period of time marked by distinctive features, events, etc.” and it’s pronounced kind of like epic, but with the “pic” rhyming with luck. If you didn’t already know, now you do. So it’s time to learn about the game! 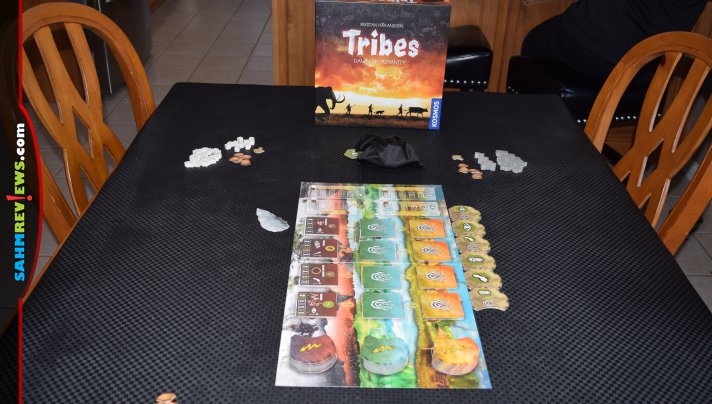 You can play a game of Tribes: Dawn of Humanity with anywhere from 2-4 players. Set the board in the center of the table and give each player a tribe that includes 15 tribe members, 12 marking stones, five shells and an arrow token. Four progress markers for each player ate placed on starting spot at the bottom of each of the progress tracks. Fill the fabric bag with the 50 land tiles then have each player draw three, replacing duplicate symbols. Beginning with the starting player, everyone adds a tribe member to one of the three tiles in their newly formed territory. 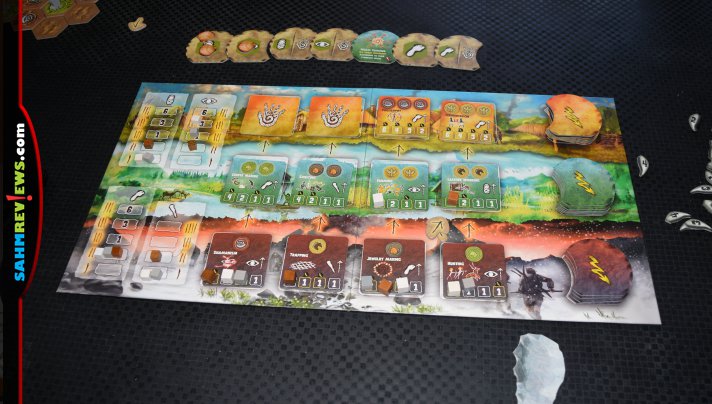 Shuffle each of the three types of achievement boards then randomly place four on each of their respective rows, returning the fifth of each type to the box without looking at it. (By the way, those “rows” represent the three epochs I referred to in my introduction.) Form separate piles for each of the three colors of event tiles and place them on their designated spots on the board. Shuffle the action tiles and place them above the board. Create a general pool of bear teeth which will serve as the victory points in this game. 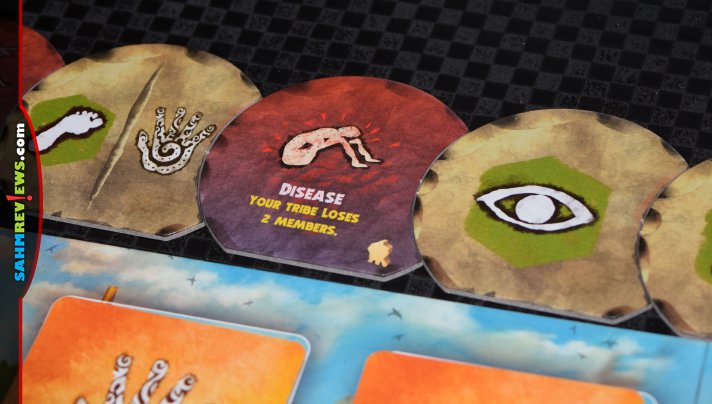 On your turn, you’ll select and perform an action then move that tile to the end of the row. Action options include procreate, move, explore or complete an achievement. This limited number of choices keeps the game moving very quickly! Additional action tiles will join the row as achievements are completed, but those are removed from the game after they are selected. 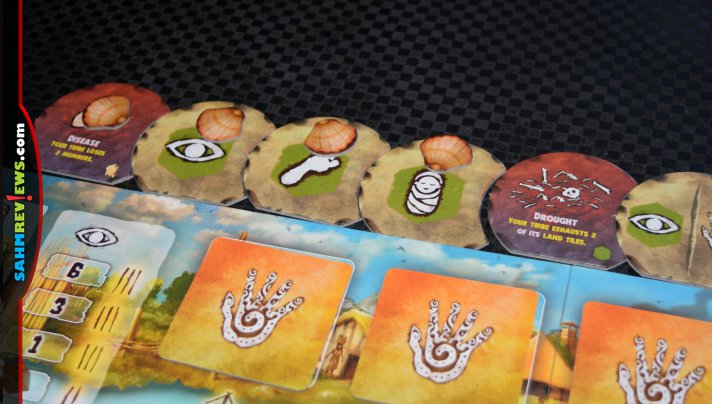 You may choose from any of the ones in the row, but there’s a catch. The action furthest to the left is free. You can select the tile, implement then move it to the end. If you want to take the second action, you must pay a shell onto the first tile. The third will cost you a shell on each of the first two shells. Your limitation is always based on the number of shells you possess. Gaining more shells is as simple as selecting a tile that has been passed over by others! 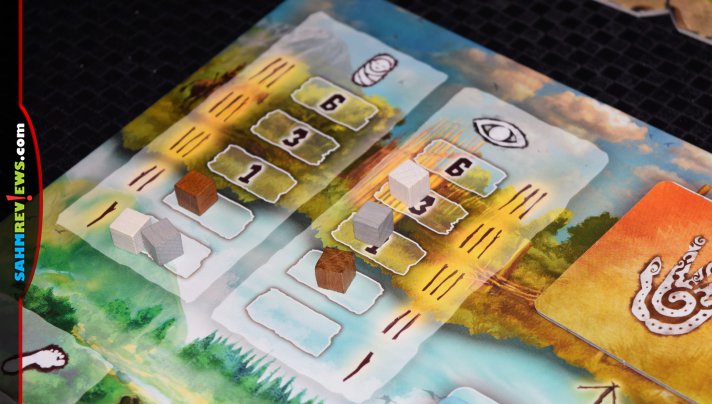 Procreate earns you additional tribe members based on your status on the progress track. These tracks increase based on achievements you’ve completed. We’ll get to the details of that particular action more shortly. 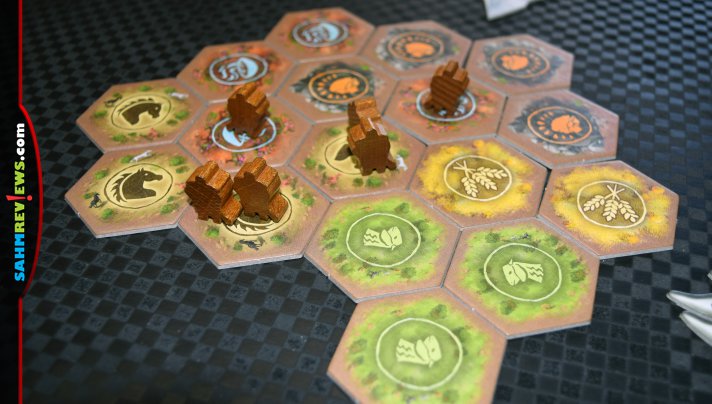 Whenever you acquire new tribe members, you must place them on a space occupied by someone else. The tiles each display one of five different symbols representing goats, horses, wheat, gold and incense. These correspond to the achievement tiles displayed in the three epochs. 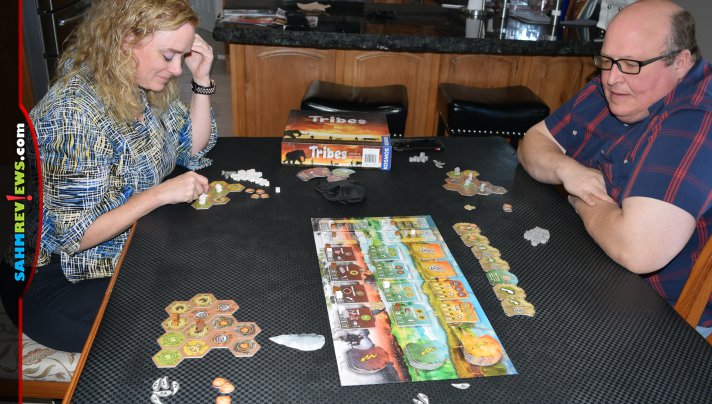 Exploring means drawing new land tiles from the bag. The number you draw is based on your level on the progress track. If you select the move action, you may move one or more tribesmen a total number of spaces. Care to venture a guess on how many spaces you’re allowed? Once again, the progress track dictates this. 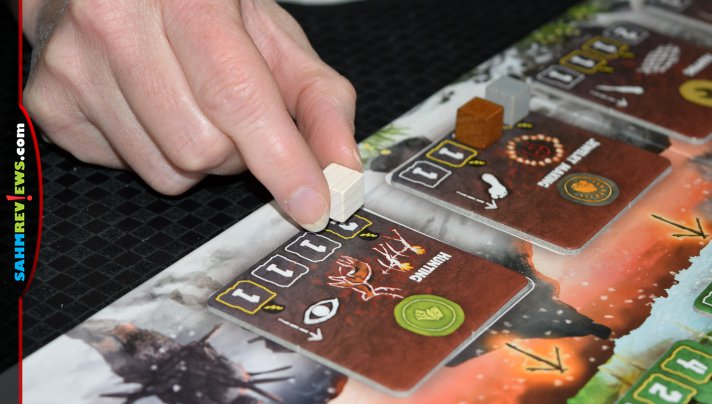 If you’re wondering where to move your people, it’s simple. Your goal is to complete achievements. The late Paleolithic period is the first epoch and requires that you have at least one tribesman standing on a land tile with one symbol of that type. The Neolithic Age, second row, indicates two of one type of symbol. The third epoch is the Bronze Age and you’ll need three tribesmen standing on three tiles of one type to earn any of those achievements. When you complete this action, you’ll place one of your marking stones on the first available space. Take bear teeth equal to the number on the space. Then if there’s a lightning bolt you’ll also add another action tile to the row! Some of these are good, others are not. Finish the action by moving your progress marker one space up for the type indicated on that achievement. 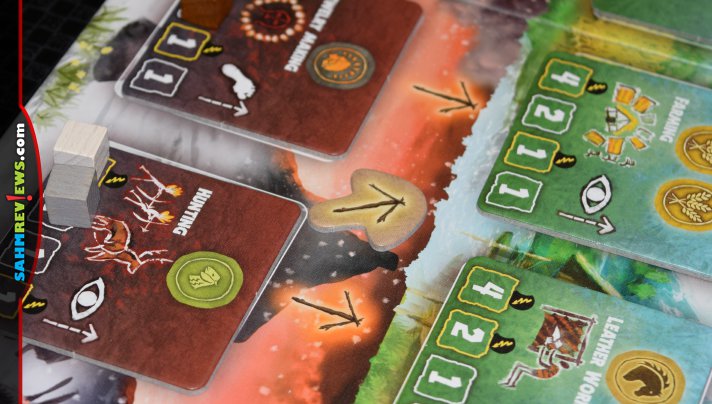 Once you complete an achievement, you may either work toward the one in the next epoch or complete another in the same era. You may complete each achievement tile only once and only move to the next row directly above one you have completed. There’s one exception to that and it’s by using your arrow. Place it on the board to move diagonally from one you’ve completed on a prior level. There are some additional rules regarding using tiles as wilds by flipping them over, but those are minor details that I don’t feel I need to elaborate on. The game ends when a specified number (based on player count) of third epoch achievement action tiles (the ones that go into the action row) are completed. Additional points are earned for where you end on each progress track, as well as for having the most tribe members and most land tiles. Total all your bear teeth and determine the winner!

Like The River from Days of Wonder, Tribes: Dawn of Humanity is a very quick game to play and could easily be played by younger gamers. This family-friendly game is available direct from Thames and Kosmos or online through Amazon. Explore Facebook and Twitter to learn about other tiles from Kosmos and what’s coming in their next gaming epoch!

What’s a word you recently had to look up because you didn’t know what it meant?