Home / Household / Financial / Does Your Teen Know When to Tip? 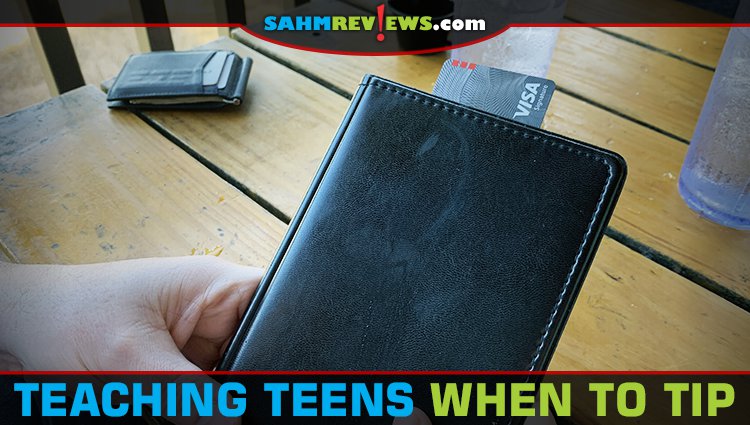 Does Your Teen Know When to Tip?

Some things have happened over the course of the last several months that really made me think about how my girls are growing. Madison attended her first college fair and both girls took organized trips with their peers. During Madison’s multi-day All-State Music Festival experience and the National Catholic Youth Conference that spanned several days for Kennedy, each occasionally shared pictures of their activities. As I admired some of the pictures of them dining at restaurants with the group, I had a revelation about the bill. Would they know what to do?

In the same way that we discuss preparing our teens for driver’s education, rules for teen driving, making the most of a college fair, we also talk with our kids about finances. Once our teens started driving and venturing out without us, we felt the need to make sure they had access to resources in case of an emergency. So Madison and Kennedy have a (limited) credit card to ensure they aren’t stuck in a precarious predicament.

But this was different. Yes, the process of using the credit card to pay their bill is old hat. My concern was whether my teens knew when to tip and how much. I hoped this wasn’t a mom-fail moment.

After they returned home, I asked if they remembered to leave a tip for the waitstaff while dining out during their adventures. As if I was asking an outrageous question, both responded, “Of course.”

Then we went on a family trip over the holidays and I realized it wasn’t as simple as whether or not they tipped. Our family was joined by my in-laws which made the group size eating together larger than normal. While dining at one of the restaurants, one of the girls questioned a note on the menu that said gratuity is automatically calculated on groups of six and over. Aha! Another opportunity to teach them a life lesson! 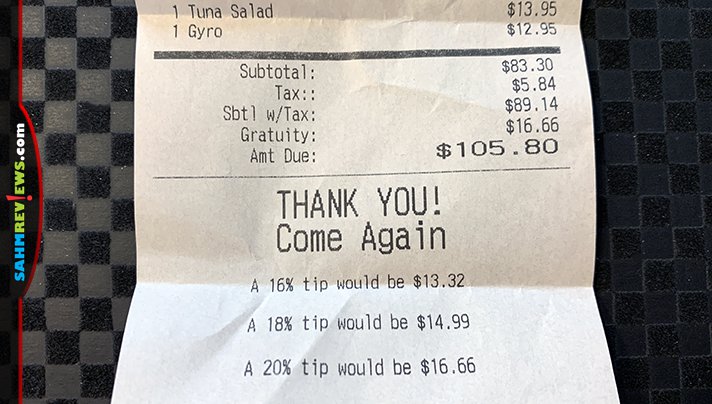 This brought up the discussion about not only tipping, but that sometimes the tip is added to the bill without any input from the guest. I’ve seen people more than once add a tip to a bill only to later discover the tip was already included. Likewise, when you are at a restaurant with others and ask the server to split the bill, sometimes the tip will be added then as well. Since the girls have been attending events with multiple people – and receiving separate bills – they need to pay close attention to these details. As we’ve told them in the past, it’s important to check the bill or receipt to make sure everything is correct. Whether you’re shopping or receive a bill in the mail for school, utilities or registration for an activity, knowing that you’re paying what you expect is important.

Of course, restaurants aren’t the only place you should tip. They’ve seen us tip the staff at hotels, taxi drivers and the hairdresser also so they know it’s more than restaurant staff. Since they’ll be heading off to college in a couple years, I guess knowing they should tip for food that is delivered would be useful information. I queried friends on Facebook to find out what services I might be forgetting. They reinforced my thoughts while including a few I hadn’t considered. Here’s a comprehensive list of where you should teach your teen to leave a tip. Even if these aren’t places they frequent now, there will come a time that they might and having that information in the back of their head is valuable.

People you should consider tipping:

In addition to tipping these people during one-on-one interaction, don’t forget that annual gifts around the holidays are appreciated by music instructors, postal carriers, package delivery drivers and even teachers. Growing up, I remember my parents leaving a gift for our garbage man, too!

While you can tip whatever percentage or dollar amount you feel is appropriate, many restaurant receipts have gratuity calculations written on them as an aid. It’s worth noting that these recommended gratuity calculations typically include tax in their base. That isn’t the right way to do it. You should pay based on the total of your purchase, excluding the taxes. In addition, places that utilize modern point-of-purchase systems (such as Square) have a window pop-up before you sign that calculates the percentage for you or allows you to add your own amount. One of the most useful reminders that I received was that just because there’s a tip jar or a line on the receipt doesn’t mean you should feel obligated. (Thanks, Liz, for that reminder!) Likewise, if you have the opportunity to tip in person as opposed to on a receipt or through an app, do that. There’s something rewarding about feeling that appreciation directly.

Teaching your teens when to tip is an important life lesson and one that they’ll appreciate more once they are on the receiving end of the payment!

Do your teens know who to tip and how much?

20 comments on «Does Your Teen Know When to Tip?»