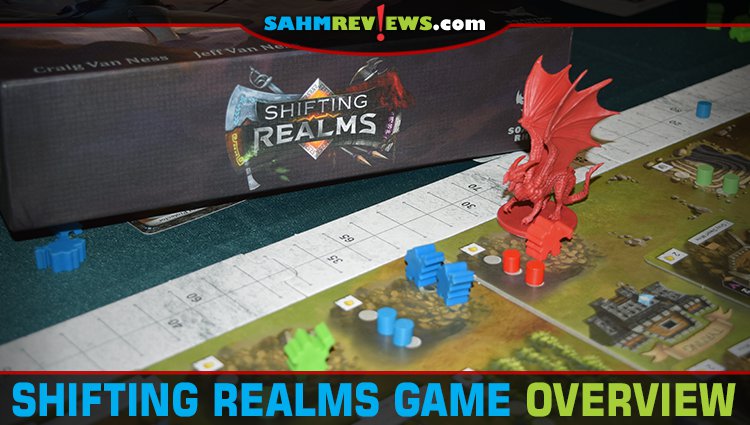 Typically when we talk about thematic games, it’s very clear as to what that theme is. Lately we have been sharing games about nature along with several games that utilize polyomino pieces. In the past, we’ve featured everything from sushi-themed games to cat-themed games, monsters, witches and pirates. A game about cats and trees would makes sense as would one about cats and sushi. Games that involve monsters, witches and pirates in a variety of settings also would be logical. But what about a game with a mixture of elves, orcs, drawfs, priests and pirates?

It’s not logical. In what realm would pirates and orcs co-exist? In Shifting Realms, of course! There were people who guarded the eternal talisman which is the cornerstone that was meant to keep all universes in their proper place and dimension. The concept of the game is that over the years they have failed to do their job, thus causing the rifts that resulted in massive destruction in all dimensions and worlds. By sending scouts and soldiers into the various realms, these factions hope to rebuild and restore order. 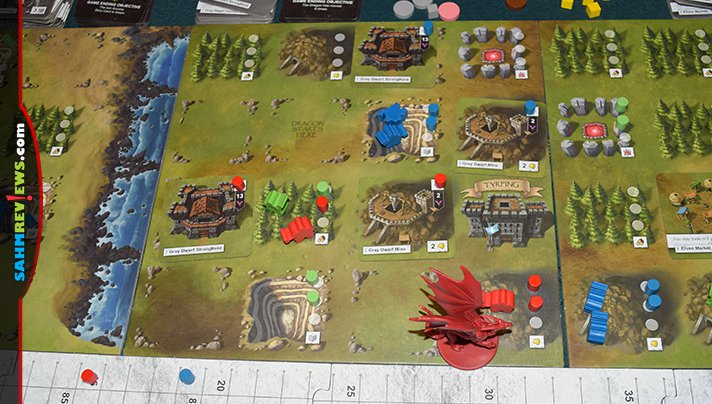 There are five different realms in Shifting Realms, each with objectives, structures, story cards and tasks unique to their realm. Before beginning the game, you’ll select three of these to utilize. Take the boards, cards and structures relating to these chosen realms then return the other two to the box. This variable ensures that each game will be unique. You’ll place the three in any order on the table the proceed with the general setup. 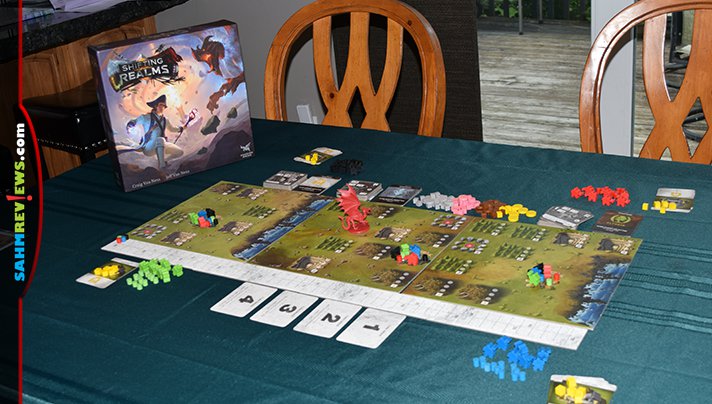 Shuffle the corresponding story cards and buildings for each and place them next to their related realm board. The resources (gold, wood, magic and stones) are set in general supply alongside the board as well. Each player is given one task card for each realm which offers each player opportunities for end-game scoring. The Turn Order cards are set aside to bid on after setup. Finally, players select a faction (color) and take five gold each to begin the game. 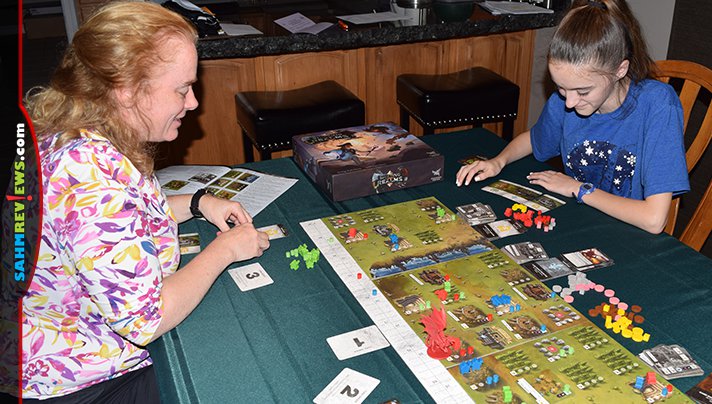 At the beginning of the game, players will secretly bid on the right to select their turn order. The person who bids the highest gets the privilege of choosing what place in the order they’ll go. Do you want to go first to secure a particular spot or building? Or perhaps you want to go last to steer clear of where everyone else has gone and at the same time earn a couple resources. I’m going to be honest here and say that we played this part of the game wrong, incorporating this bidding process into each round! I overlooked the line in the rules that the auction process is to “determine the turn order for the game.” I’ll explain later why that was confusing. 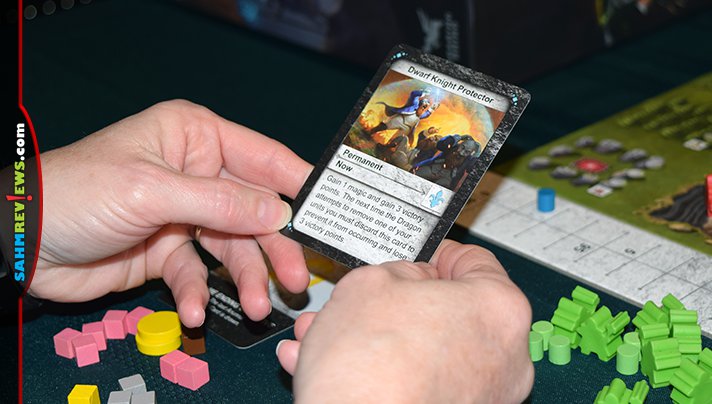 On your turn, you’ll perform up to three actions in any order. You may use up to two of those action points to draw story cards. The cards vary based on the realm and may include giving you resources, allowing you to move the dragon, protecting your troops from the dragon and more. The impact of the card may take effect immediately, on a future turn or at the end of the game. 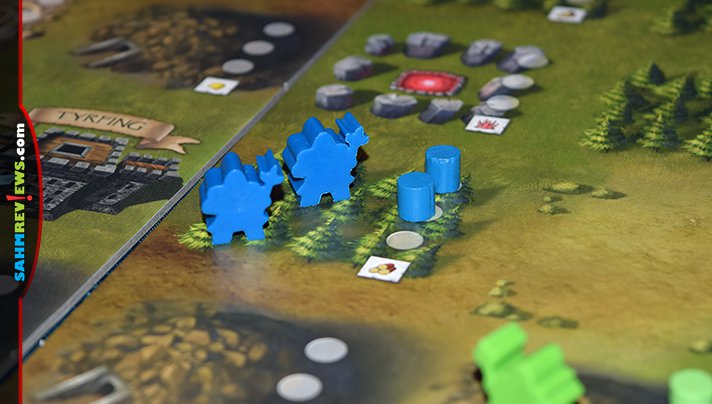 Another action is to recruit units. You may spend one gold to recruit any combination of two scouts and soldiers. Scouts are the people who collect resources for you while the Soldiers protect the Scouts and fight for area control. Soldiers and Scouts may move (together or individually) from their current space to another space up to three away and it costs one action point to do so. It’s worth noting that you may only move a Soldier/Scout once per turn. Wherever you have Scouts at the end of your turn, you’ll collect the resources designated on that space. There are only three available spaces for collecting resources so you may find the need to attack your opponents to make room for your Scout to attain one of those limited resource spots. 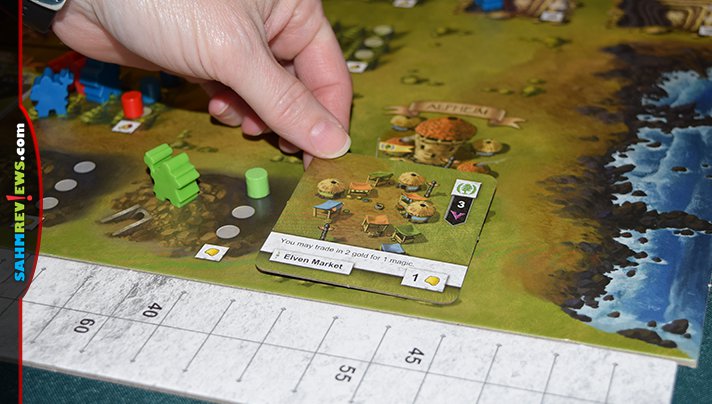 The fourth and final way to spend action points is by building structures. If you have the resources required to build a particular building and have troops in a space adjacent to where it needs to be built, you may spend one action point to lay claim to a building and the benefits it offers. Victory points vary based on the type and strength of the building. 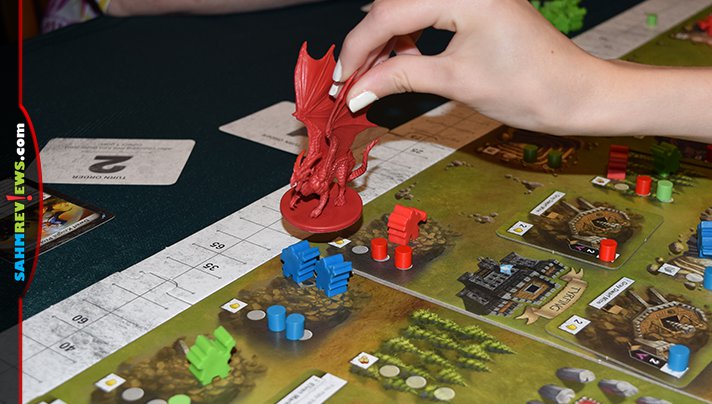 At the end of your turn, you’ll collect resources for any place you have Scouts as well as any buildings you have constructed. You’ll be able to utilize those resources to construct buildings on a future turn. As I mentioned before, each of the realms is unique. One of the realms allows you to move a dragon about the land, destroying troops in its path! This is one way to remove opponents from spaces so you’re better able to claim a resource spot. 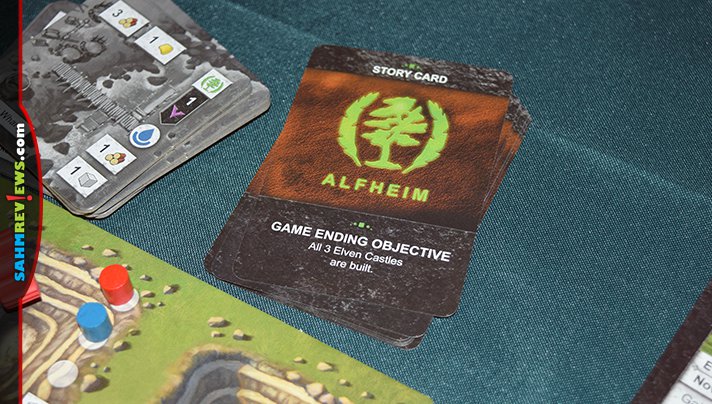 The game is over when either all the buildings in all three realms have been built or two of the three realms have met their Game Ending Objective. The objectives are indicated on the back of the story cards so you’ll always know what you’re aiming for. As soon as someone triggers the end of the game, they finish their turn (including collecting resources) and the game ends. This is where I find confusion with the purpose of the turn order bidding at the beginning of the game. While I get that the intention is to offer some control of turn order, it seems like first is the best option since the game ends with the person who fulfills the final game-end condition. When this happens, points earned from Task Cards, Story Cards and extra resources are added to the victory track. The player with the most points is the winner.

Shifting Realms seems like it has a lot going on, but it’s a basic resource management and area control game at its core. If you want to keep things simple, you can focus on collecting resources and building without engaging in battles.

You can discover copies of Shifting Realms on Amazon or directly from the Soaring Rhino website. Find out what else is shifting around the board game universe by visiting the realms of Twitter and Facebook. We hear there is research into reviving extinct species and they might know something about that! We expect to find out more when we see them at Gen Con.

How do you feel about playing a game where the characters are outside their normal realms?