According to Merriam-Webster, a bosk is “a small wooded area”. It’s a term I had never heard before and wondered if it was a regional term. Around here we just call them “woods”, but it seems that a bosk refers to something even smaller. It’s the equivalent to a pond instead of a lake. Once again, I learned something new from a board game.

Bosk is a brand new tree-themed board game by Floodgate Games, who you probably know for their hit dice game, Sagrada. It is also designed by the same person, Daryl Andrews, who not only made Sagrada, is known for a number of other popular titles on the market. Oregon Trail, Outpost: Amazon and Space Invaders are just a couple of the amazing games he has in his stable. We’ve seen a couple of his prototypes recently and can honestly proclaim there are more great ones on the way. 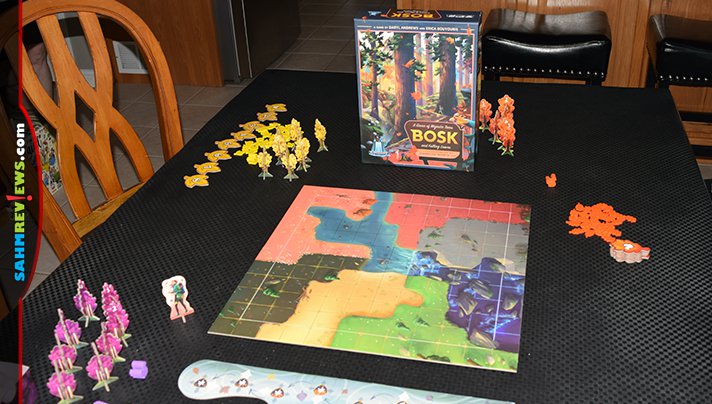 The first thing you’ll notice about Bosk is the amazing artwork on both the cover of the box and the components inside. It’s beautifully illustrated by Kwanchai Moriya, who is quickly becoming a go-to artist in the board game world. Inside you’ll discover custom leaf-shaped meeples, 3-D tree standees and cleverly-designed boxes which house the components and aid in keeping them organized by color.

The tagline of “A Game of Majestic Trees and Falling Leaves” accurately describes the experience in Bosk. Played over four seasons, we best describe Bosk as two games in one. Setting up for a game is pretty quick thanks to the previously-mentioned boxes. Give one to each player, which includes 8 trees, 36 leaf tokens, 8 leaf tiles and a color matched squirrel. Lay out the double-sided board according to how many players are participating. The separate Wind Board and marker are set aside and won’t be used until the autumn season. Randomly determine first player and give them the Hiker player marker. 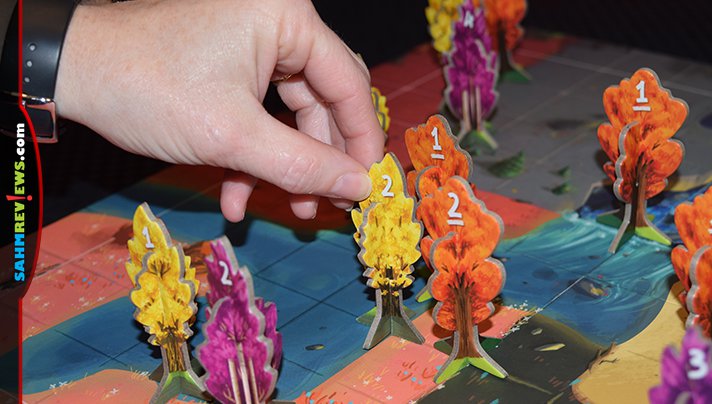 During the first round (spring), players will be planting their trees onto the board to try and take control of pathways that navigate the Bosk (hey, I used the word correctly here!). In turn order you will place one tree on any path intersection (the lines that form a grid), taking into account the number printed on the standee. The trees are numbered 1-4 and you have two of each number in your inventory. You are trying to gain majority in a row or column based upon the value of your trees. 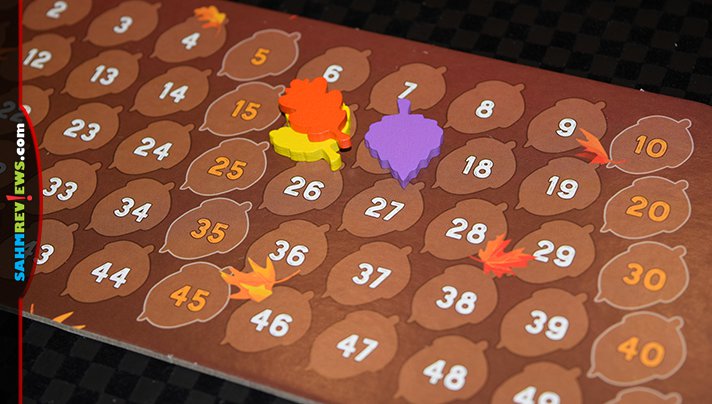 Once everyone has taken turns placing trees and all are on the board, the summer season commences. There is no game play during this round, just scoring. Each column and row is examined individually and points awarded to the player(s) who have the highest overall value present. If a player is the only person with trees in that line, they are awarded three points. If there are other hikers, first place gets two points while second place receives one. If more than one person has the highest sum, they each receive one point and no points are awarded for second. Same situation for second place – if there is a tie, those players receive no points. 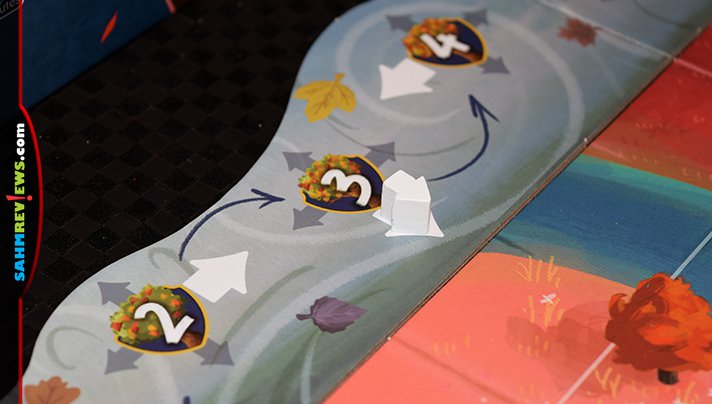 Autumn arrives and leaves begin to fall from the trees. This is where a second type of game occurs and in our opinion is the most fun. The player with the fewest points from the summer scoring is now the start player and takes the Wind Board and puts it on any side of the main board. This new board dictates the direction of the wind for each round, which is kept track of by a tiny arrow-shaped marker. Autumn is played over eight rounds in which you will empty one tree of leaves and control how they fall to the ground. 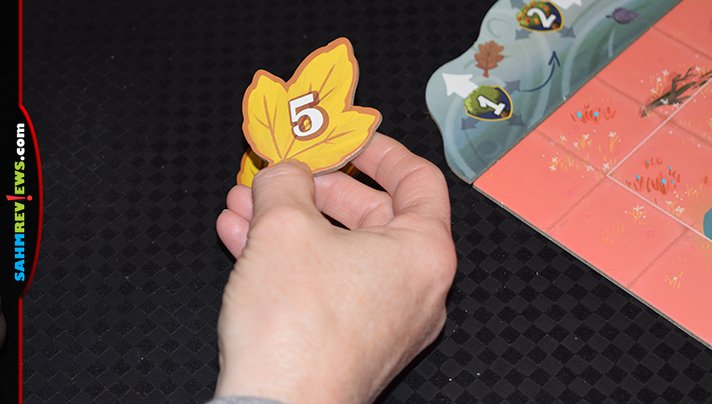 Rounds one through four dictate the tree number you must resolve (listed on the Wind Board) and you may choose from either of your trees with that digit. You will also select one of the eight leaf tiles in your hand, which will denote how many leaves fall from that tree. Select an equal number of leaf tokens from your supply and begin dropping them onto the board. 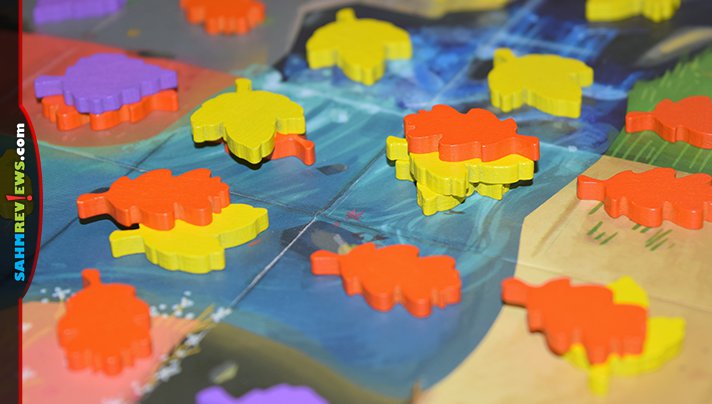 Leaves fall in the direction of the wind, starting from one of the two squares at the base of your chosen tree. The next leaf will fall in one of the three squares touching the first square in the next row, and so on until you have placed all of your leaf tokens. If there were no other leaves in the square, you simply place your token in that space and now control it. If another player had tokens in that spot, you must discard tokens from your hand equal to the number of leaves in the space before being allowed to place an additional token to the top of the pile. All players take one turn dropping leaves according to the leaf tile they chose with the person playing the lowest-valued tile becoming first player for the next round. 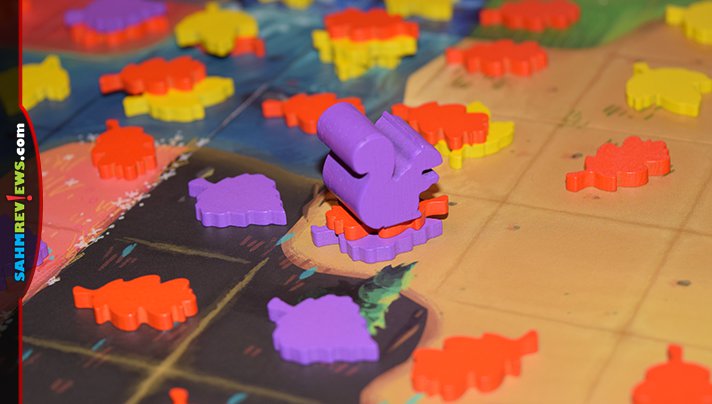 One of the leaf tiles depicts a squirrel (which counts as a “1” when determining player order). This is a special action you may take only once. You ignore the direction of the wind and place the squirrel on top of any space without paying any leaf “fees”, keeping within three spaces of the original tree. In both turn examples (placing a squirrel or dropping leaves), once your turn is complete, you remove the tree from the board and return it to your box. 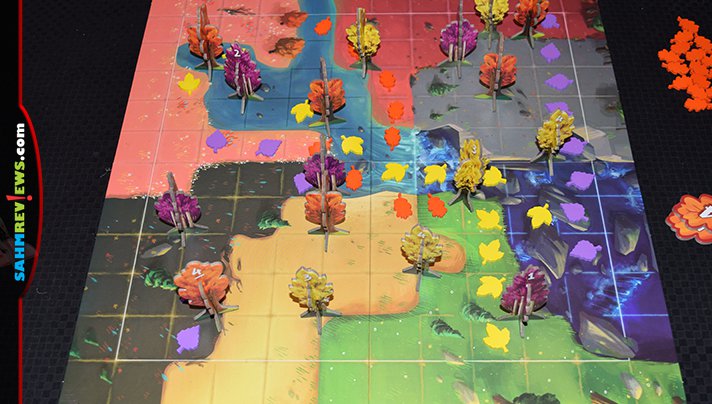 So what is the purpose of leaf-dropping? This portion of the game is a traditional area-control fare. The board is divided into different terrain types and you will be trying to have the most leaves in them to score points. Once all of the trees have dropped their leaves, the game proceeds to the winter season (another scoring round). 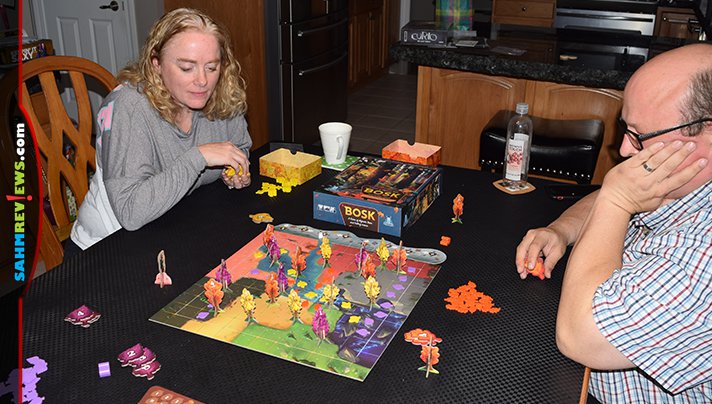 Again, you will only score in an area if you have the most or second-most number of leaves in that particular terrain type. If you are alone in an area, score eight points. If not alone, but in first place, score five points. Second place will receive three points unless tied, and in that case each player gets one. If there is a tie for first place, all tied players receive four points and none are awarded for second. After resolving all of the areas on the board, the player with the highest summed total wins Bosk!

As you can see, Bosk is two very different games rolled into one. The first season of placing trees is more like a setup with some minor point scoring. The real interaction comes when dropping leaves. And even that is affected by the decisions you made in the first season! It definitely is a game you have to play multiple times to flesh out a strategy. Don’t discount the option of giving up points in the first half of the year to have optimum positioning during the latter half!

Bosk can be found on Amazon, at your favorite local game store or at any of the major board game conventions going on this year. Keep tabs on Floodgate Games by following them on Facebook or Twitter and be sure to talk a walk over to their website to see what else they’re planting this season!

What tree types do you find in your local woods?

29 comments on «Bosk Board Game Overview»