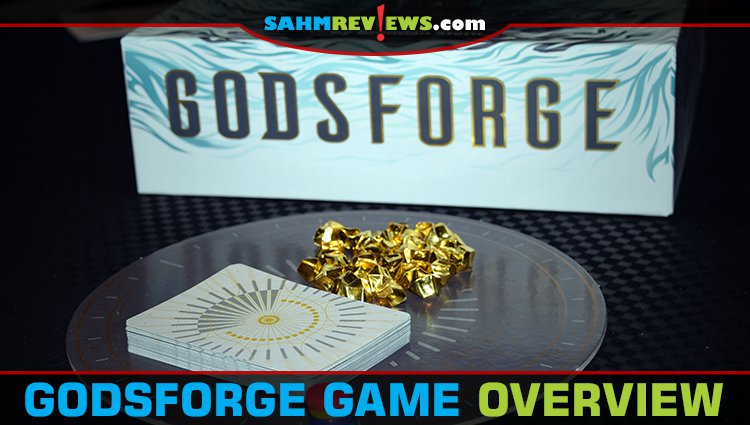 When we started playing board games many years ago, I knew the girls were open minded about the types of games they would play. While we all have our preferences, never would I have guessed that battle games would be among their favorites. The idea of being tactical is something they excel at so jumping into a game where they can attack mom (or usually, dad) without the fear of being grounded is something that apparently resonated with them.

Personally, I don’t excel at tactical games like chess as I simply cannot think that many moves ahead. The most recent battle game in our collection is Godsforge from Atlas Games, the publisher of Cursed Court. A few unique elements to this game put it into a different category than a standard tactical or attack game. While many games like Risk utilize dice to determine the attack, Godsforge uses them as currency! 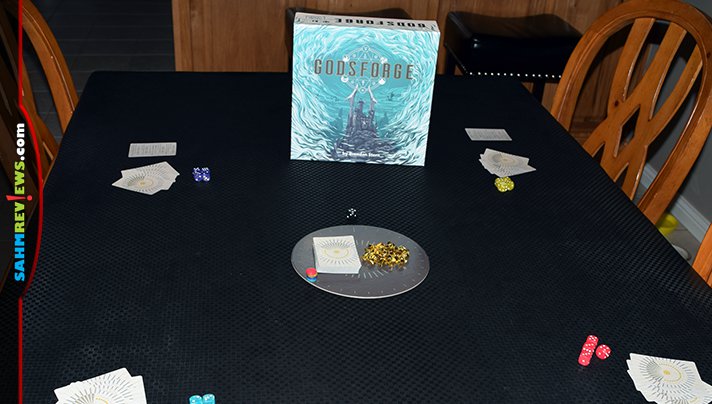 Godsforge, which plays 2-4 people, is simple to setup. Place the board in the center of the table with the Veilstones in the designated spot. Shuffle the deck of playing cards then deal four to each player. Place the remaining cards alongside the Veilstones on the board where it says “Fate Deck”. Each player takes a reference card and a set of colored dice then places the matching scoring token on the starting place on the board based on the number of players. 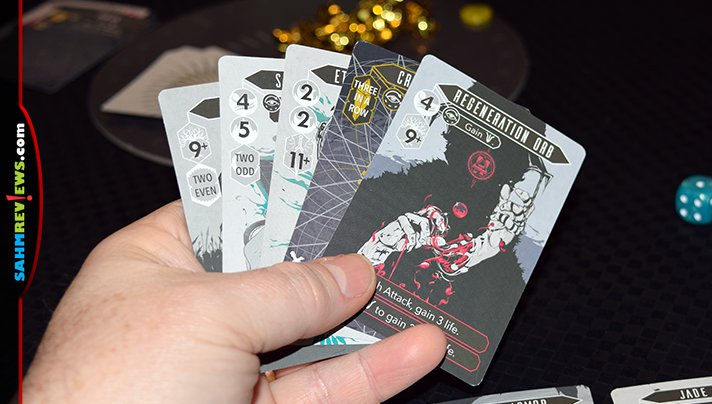 The Fate Deck is made up of two types of cards: Spells and Creations. The Spell cards are one-time use while the Creation cards have ongoing effects. Each card shows the cost in the upper left and to purchase it you need the proper currency. As I mentioned before, that means you need to roll the right dice in order to buy them. On the top of some cards, you may see an eyeball symbol that reflects a bonus you may take when the card is revealed. The bottom reflects ongoing effects, attacks and shields. 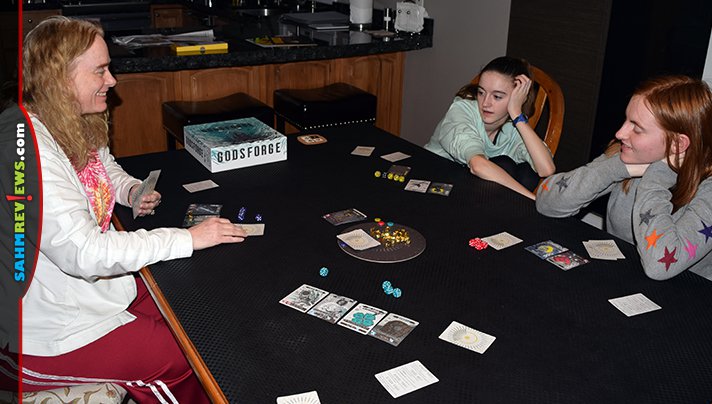 Each round takes place over four phases with each player taking their actions concurrently. During the Upkeep Phase, players may discard up to two cards then re-draw up to their hand limit. The second phase is the Forge Roll. Everyone at the same time rolls their dice. You may re-roll one die twice or two different dice once each. You’ll use the results of the dice to buy the card you want to play. While thematically the different die values have a corresponding element, in reality, it’s just a number. So for the sake of simplicity, I’ll avoid referring to the different elements. Some cards require specific numbers, others require odds or evens and some require a run of numbers. Veilstones are represented by a symbol that looks like a cross between a V and a W. In order to purchase a card that uses requires a Veilstone, you’ll need to roll a 6. Don’t worry, if you roll a 6 on a prior turn that you haven’t utilized, you can purchase a Veilstone and bank it. A dice roll of 1 counts as a wild. Once you’ve finished rolling, you place your selected card face-down with the results next to it along with any required Veilstones to pay for it. If you cannot (or choose not) to play a card, you may collect four Veilstones instead. 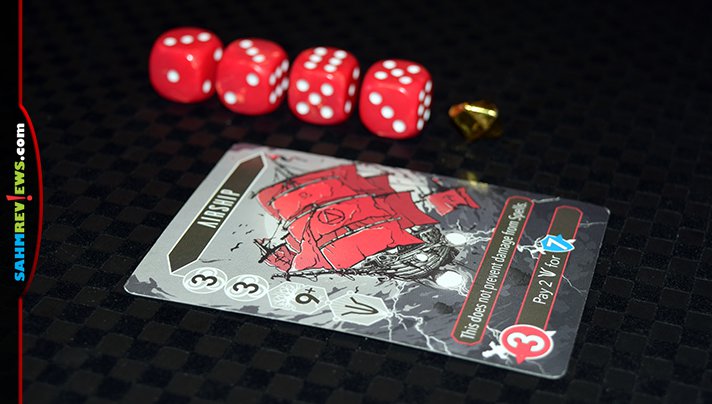 Once again, everyone plays at the same time as you move into the Reveal Phase. Simultaneously, everyone flips their cards and they all go into effect. You’ll pay the required costs, collect Veilstones for unused 6’s and implement any “reveal” bonuses. Then it’s time for the fourth and final phase of the round, the Attack Phase. 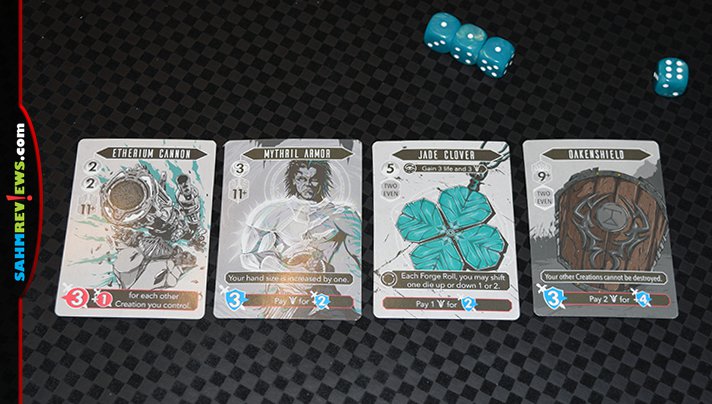 Now here’s the thing that’s interesting. You are always attacking the person on your left and being attacked by the person on your right. Always. There isn’t an opportunity to pick and choose your opponent which is good for families who have a tendency to have hurt feelings by being singled out. If you have defense, you’ll deduct it from any attacks with the overage of damage being deducted on the board. All Spell cards are placed in the discard pile while Creation cards remain in play from round to round.

Once you fall below zero, you are out of the game and the person who knocked you out earns three Veilstones. It’s possible that more than one person can go out in the same round! At this point, the game ramps up. All remaining players will endure an additional attack of seven in every remaining Attack Phase. Play continues until only one person remains. Should the final players be eliminated on the same round, whichever of those remaining players was the “least killed” is declared the winner.

While Godsforge carries a spellcaster-style theme, it’s really not a barrier to entry of play. Rated at 14+, we can easily see younger children being able to play with some guidance regarding the rules. The game is labeled as lasting up to 40 minutes but our experience is that its much quicker, even with a full compliment of four players. The fact that everyone plays at the same time really speeds things up. Godsforge will retail for just under $35 in May, but you can pre-order on Amazon or direct from Atlas Games. Find out about other releases by following them on Twitter and Facebook. While you wait for this to arrive, check out our thoughts on Cursed Court!

Do you typically go after certain people when you play attack games?