It seems as of late all the space-themed games coming onto the market are marketed towards an older audience. Tabletop games like Fantasy Flight’s X-Wing and Armada certainly require deep pockets in order for your team to remain relevant. Other recent releases like Twilight Imperium or Zombicide: Invader not only break the bank at over $100 each, they require a multiple-hour commitment in order to complete the game. Fortunately we’ve discovered one recently that not only is lighter on your wallet, it plays in under 90 minutes and has an alien theme and mechanic that will appeal to more than just adults!

Chimera Station by Tasty Minstrel Games originally hit the shelves late last year after a successful Kickstarter campaign which featured both a regular version and a “Deluxified” option. Fret not, because even though the deluxe version was only available during the Kickstarter and in limited quantities at game conventions, the game play is exactly the same between the two versions! 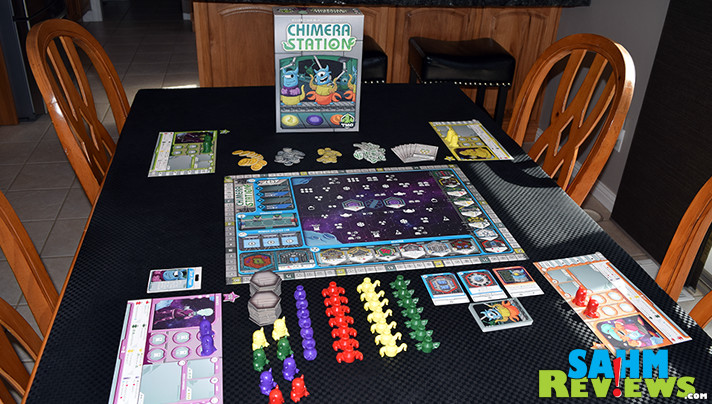 In the backstory, Chimera Station is an alien space station where you and your opponents reside. Designed as an intergalactic commerce hub, your job is to continue adding to the station by constructing modules and take command of the entire station! 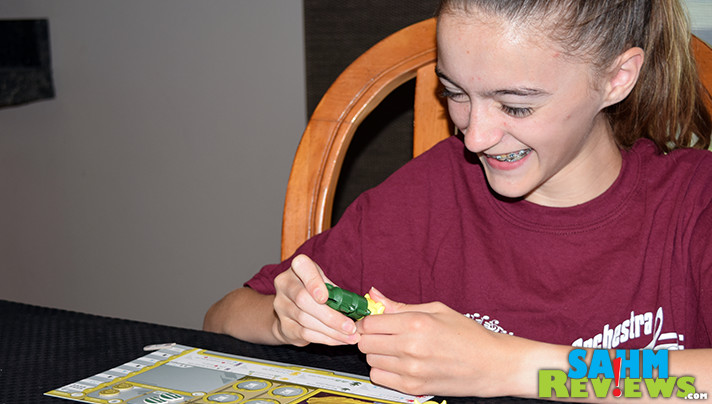 The first thing you’ll notice about Chimera Station are the cute and unique pieces each player receives. These multi-part aliens aren’t for looks only, they provide an innovative upgrade mechanic usually reserved for cubes on a board. Instead of each player tracking their earned in-game upgrades on a player board, you physically upgrade your alien workers by adding or removing body parts to them! And depending on which parts you add, your worker will gain new skills and abilities! 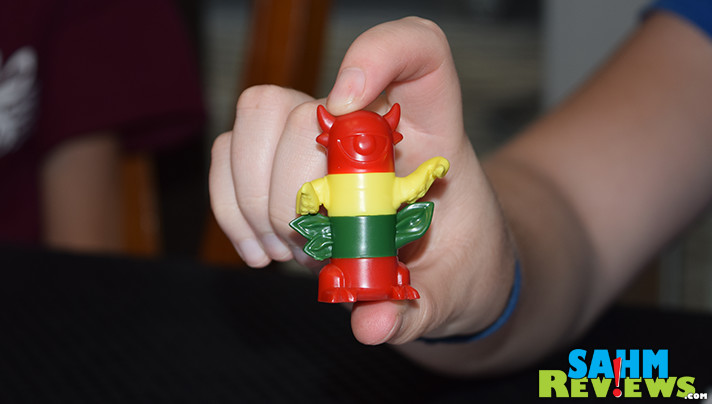 Chimera Station is played over five rounds, broken into three phases each. The first phase is entitled the “Placement Phase” and allows you to place a worker from your pool onto an existing module either on the board or on one of your Perk Cards. When you place that worker you immediately gain the benefit listed, and only one worker may occupy a module at a time. 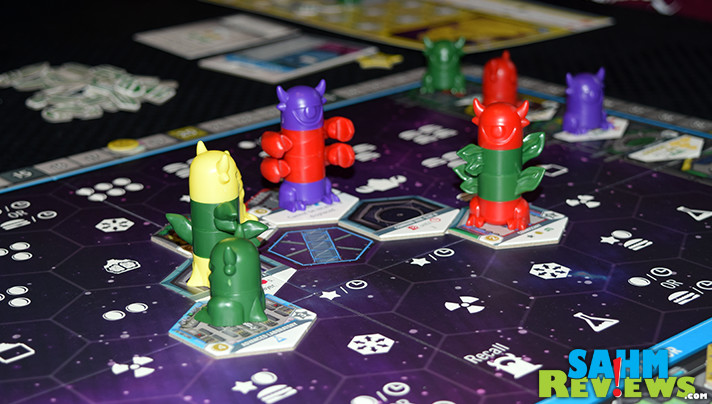 If there are no modules you wish to (or cannot) occupy, you may instead send that worker to the Splicing Lab. This is exactly what you think it is – the place where your workers are altered (upgraded)! Alternately, if you need food or coins, send the worker to the Worker Lounge to be employed later. Players take turns each placing one worker in order until all workers have been assigned for the round. Play then progresses on to phase 2.

As previously mentioned, the “Splicing Lab Phase” allows you to add a genetic component to any of your workers who visit the Splicing Lab. These are what makes Chimera Station so different than any other game of this type. Your workers literally split in half at the waist to accommodate a new plastic piece! You have four different types to choose from:  Brains that allow you to score points when you enter a module, Claws which allow you to bump other aliens out of the spot you want, Leaves that make the alien self-sufficient and not needing food in the third phase and Tentacles which give you additional arms in order to gather more food and coins. Each worker can add up to two genetic modifications which brings an additional bonus to each type! 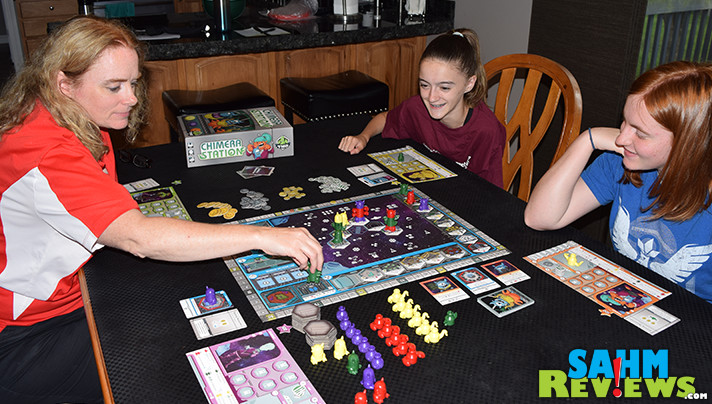 The workers in the Splicing Lab are then sent to another module of your choice, assuming the area is open, and perform that action. In a nutshell, you are giving up the right to choose a module early in order to add a genetic component to your worker! Interestingly, the Splicing Lab can only accommodate three workers, and they exit the lab in alphabetical order! 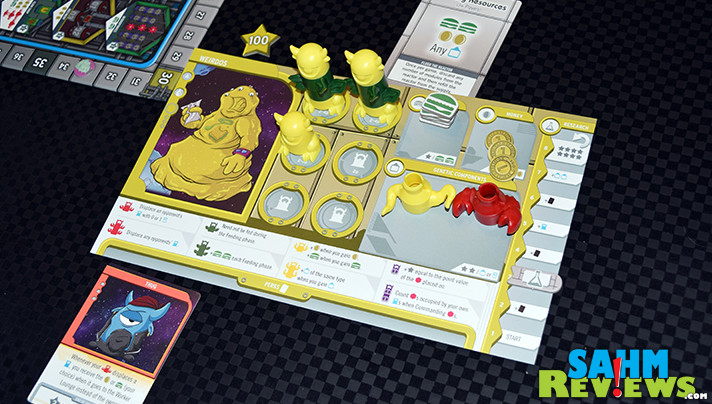 For the third and final phase, you must feed your workers. Collect all of your workers from the board and place them back in your pool. Pay one food for each worker in your pool, and if you don’t have enough food for them all, you lose one component attached to a worker for each you are short. Make sure you have plenty of food available as if you run out (and out of components) you will lose two points for each one you’re lacking!

As the game progresses and players build modules, the main board will begin to expand. Available modules are displayed across the bottom of the board in the Reactor. Each time a module is built, it uses up a bit of the station’s power supply. If depleted, no new modules may be built until its fuel is refilled! With 40 different modules available to be built (and they’re randomly seeded), no two games should be alike! 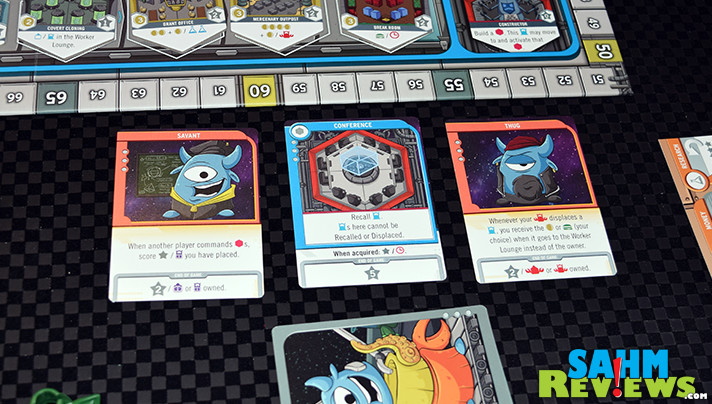 At the beginning of rounds 3 and 5, new perks are dealt out and are now available from the supply. Your personal research track is advanced and you take whatever bonus you are due. After five full rounds the game ends. Add 1 point to your total for every three coins in your possessions, 1 point for every two food, 2 points for every component (attached or not) and any bonuses you gain from Perk Cards. When added to the points you earned during the game, the player with the highest overall sum wins Chimera Station!

Upon first glance, Chimera Station seems more complex than it really is. Your turns are simple – place a worker on an open action of your choice or delay your selection by going to the Splicing Lab. Use your upgraded workers to capitalize on module bonuses and watch your food supply! Do all three of these successfully and you’ll be well on your way to ruling the space station!

Ringing in at under $50 on Amazon, you can also find copies available for purchase at your local game store. 2018 has been a banner year for Tasty Minstrel Games with a number of new titles hitting the market. Two brand new ones will make their debut at Gen Con this week, Jungli-La and Trade on the Tigris, and watch for some of their Kickstarter campaigns to fulfill shortly thereafter! Stay on top of what they’re up to by following them on Facebook and Twitter or subscribing to their newsletter!

Do you have a favorite space-themed game?