I think we all played the classic game of Clue when we were kids. For us it seemed like Colonel Mustard was always using his lead pipe on someone. Maybe we just didn’t shuffle the cards well enough. Either way, it really was a game that was best enjoyed with the full compliment of six players. And with only four in the family it didn’t get played enough.

The best part of the game was the logic side of trying to deduce exactly who, where and with what had happened. It was one of the two puzzle games we owned back then, the other being Mastermind. Both did a great job of forcing you to make assumptions and conclusions based upon available information and are still on retail shelves today. Unfortunately there haven’t been many advances in the genre, that is until now.

When we first received our copy of Cat Crimes by ThinkFun, my first thought was “another cat game for our list!” Then I realized it was another in ThinkFun’s excellent line of single-player puzzle games like Roller Coaster Challenge or Wave Breaker which would challenge us to complete numerous puzzles of ever-increasing difficulty! But instead of figuring out a path or building a contraption, Cat Crimes summons us to figure out which cat in the menagerie is causing trouble. 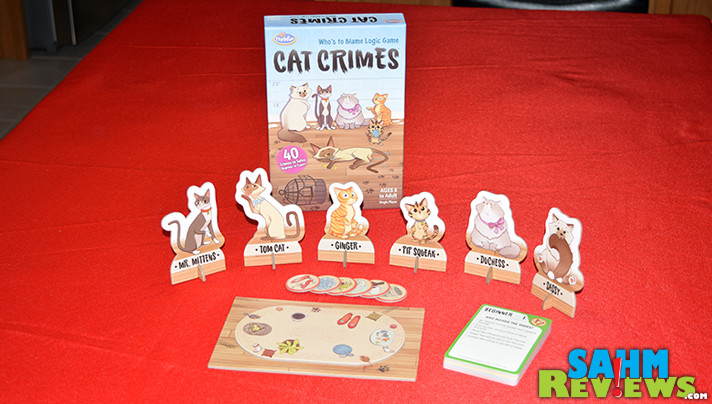 The scene is set in your neighbor’s house where you have agreed to pet sit their six cats. While you expected a weekend of quiet, you repeatedly find spilled coffee, broken flower pots and even a missing bird! Of course you never see who exactly is the culprit. You must figure out the feline felon by resolving the clues on your own!

Cat Crimes includes a board representing the dinner table. The table is laid out into six sections, each with a potential crime position and two types of supporting evidence. You must figure out who was sitting where when the crime was committed using only the clues on one of the included Challenge Cards. 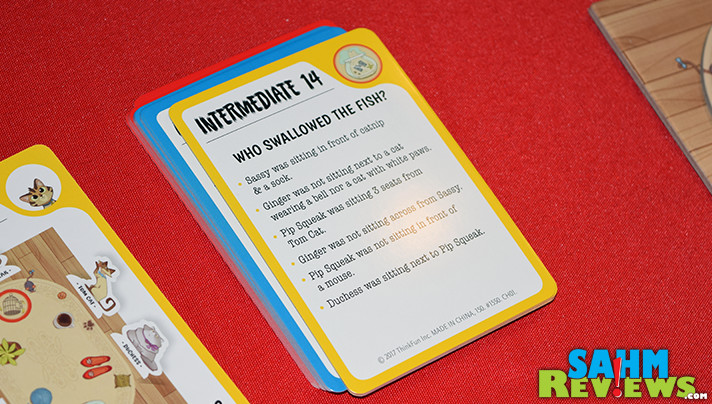 As with ThinkFun’s other games of this type, the Challenge cards start you off at a very easy level to get you comfortable with how the game is played and then turns up the difficulty as you proceed through the challenges. The card will list the difficulty level, from Beginner to Expert, the type of crime committed (in the upper right corner) and clues as to whodunit.

Using the included cardboard standees representing the six different cats, you will place them around the table in positions matching the written clues. For instance, if a clue tells you that “Tom Cat was sitting in front of catnip & a sock”, then you would place his standee in the seat position with the flower pot, since it has both a sock and catnip next to it. 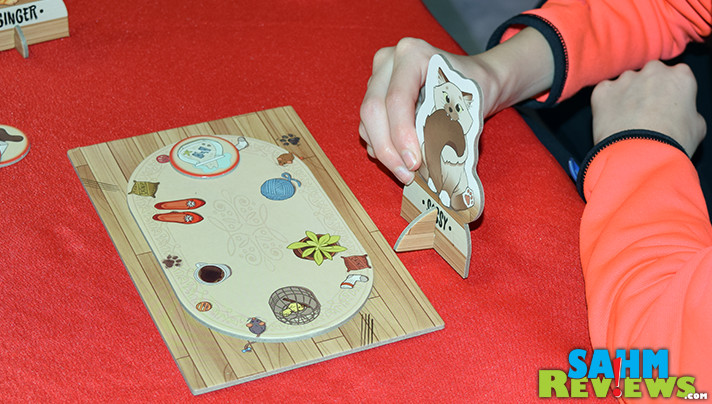 Other word phrases like “next to” means the cat was to the left or right of the item listed. “Between” means exactly that – the current cat was between two items or other cats. Positioning in relation to other cats will come into play when you have to sit them next to a certain one or across from another. Clues do not have to be used in the order given, but ultimately you will have to verify that the positioning of all your cats correctly resolves to all of the listed clues. 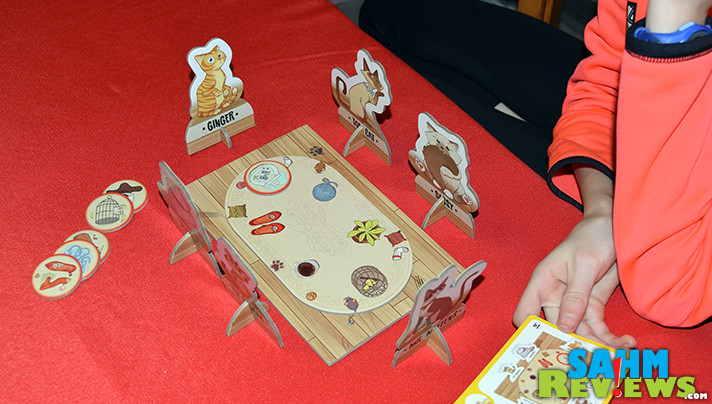 Once you think you have all of your cats arranged correctly, flip over the Challenge card to reveal the solution. The cat sitting in the position of the crime token (the one that matched the upper right of your card) is the criminal! Get it correct and move on to the next challenge in the same manner. If incorrect, spend some time learning from your mistakes and seeing where you went wrong. 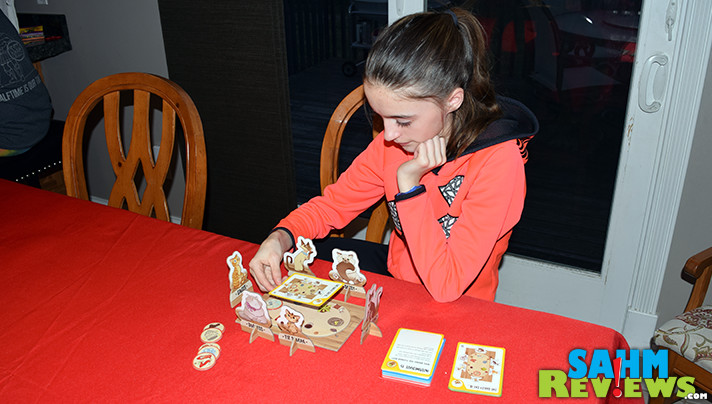 We really like Cat Crimes for the logic and reasoning needed in order to be successful. While advertised for only one player, there is no reason kids and families can’t team up to try to solve them together. In fact, it will probably spur good discussion about why something is placed where and why something else would not work.

We do know this has been a hot seller for ThinkFun and encourage you to pick up on a copy on Amazon for only $13 or at your local game store before they sell out again! With a promise of a lifetime supply of catnip, we convinced ThinkFun to award one lucky SahmReviews reader with a copy of their own! Use the form below to enter and come back tomorrow for additional entry opportunities!
Cat Crimes Game Giveaway