At bedtime for the past few weeks, even before the passing of Stephen Hawking, Scott and I have been setting the sleep timer as we tune the television to a show about the universe. It’s been interesting, exciting yet peaceful to listen to all the amazing discoveries about the planets, the moons of the planets, dwarf planets and stars. Technology has allowed science to learn so much about our universe and these shows have really highlighted so much! I’ve always had a basic interest in astronomy and space and was thrilled to be able to attend Family Space Camp as well as tour Marshall Space Flight Center then stand atop the S-1C Static Test Stand that was used to test the Saturn V in 1965-66. I’ve also enjoyed seeing the girls express an interest including watching shows, movies or documentaries relating to outer space. A few years ago, Madison took up stargazing as a way to calmly close out most summer nights. 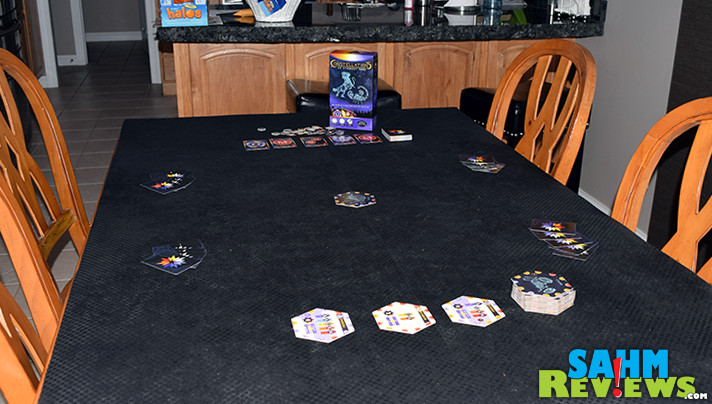 Despite taking an astronomy class in college, I don’t recall many of the details. That was a long time ago and there haven’t been reasons for me to delve deep into this aspect of science since then. But as I’ve said so many times before, games provide an entertaining way to learn about history, science, math and more. Constellations by Xtronaut Enterprises is the latest example and let me say, it’s pretty solid. It’s more than just a game, it’s a great tool for learning about constellations and the science behind the stars. 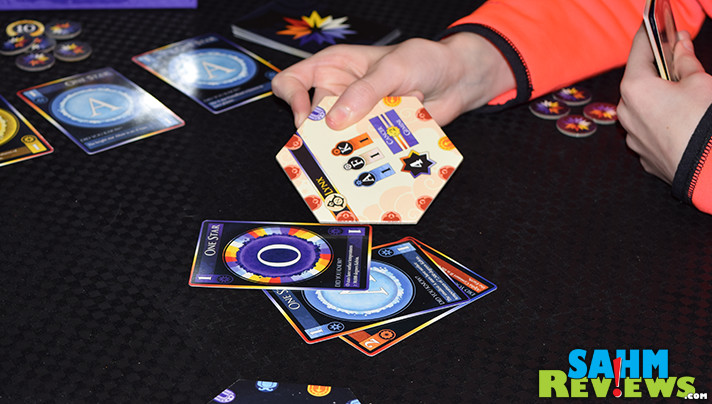 In Constellations, you’re collecting star cards to meet the requirements of available constellation cards. When you place the constellation, you score points. That’s the game in a nutshell. There are a lot of games where you’re collecting resources in order to fulfill requirements, but this one is quite different. The designers not only wanted to make the game entertaining but also make it scientifically accurate. Each Constellation Tile depicts the constellation on one side and the star types that make up that constellation on the back side. In addition to providing rules for the game itself, educational information is provided in the rule book that go into more details about the stars and the science behind the game. 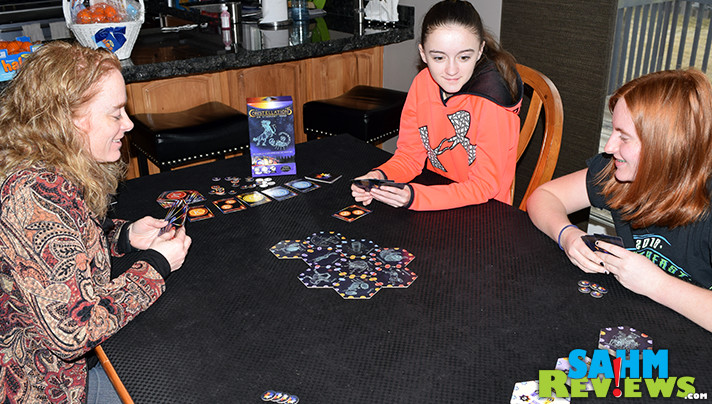 I’m guessing that makes you MORE curious how to actually play. That’s why you’re reading, right? Good! As I said before, it’s a set collection game. The goal is to add the various constellations to the night sky. In a basic game, tiles and cards are both shuffled. Five Star Cards are dealt to each player then five are placed face up next to a draw stack on one side of the table. A number of Constellation Tiles are removed from the game based on the predetermined timing and player counts then a starting Constellation Tile is selected according to the instructions and placed in the center. The remainder of the stack is placed face up on a different side of the table than the Star Cards. The three top ones are flipped with the requirement side face up to form a pool of available constellations.

Choices are limited with only three options available per turn. Select a card, reserve a constellation, place a constellation. That’s it. You get two actions per turn and can repeat if you choose. When you select a card, you can grab from the ones face up (then replenish) or you can select from the top of the draw pile. As in the night sky, there are not an equal number of all star types in the deck. There are more of some than others and a limited number of “double” star cards. Scientifically, O-stars are massive and destroyed in a giant explosion (a supernova) thus triggering new star formations. Because of this real-life cause/effect principle, cards in the game that depict an O can be used as an O star or as a wild! Have to admit that’s a sneaky way to teach something. You’ll be working to fulfill the requirements on the various available constellations but if you see one you have your heart on, you can reserve it before someone else grabs it. That counts as an action, but if you’re close or it’s high value, it might be worth it. (Or in our case, if we simply want to keep an opponent from having it.) You can only reserve one at a time so if you want to reserve another, you’ll have to forfeit the first to the bottom of the draw pile. 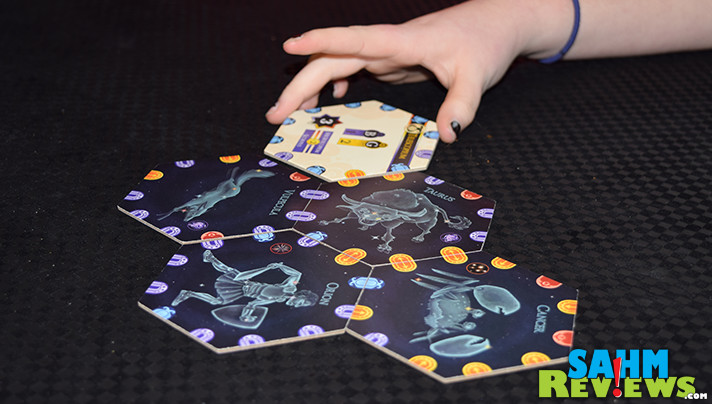 The third action involves placing a constellation. Once you’ve collected the required number of cards, you discard them to grab an available constellation or to place the one you have reserved. You’ll score based on the value of the Constellation Tile plus you’ll get 2 bonus points for each constellation you place it adjacent to that it’s next to in the real sky. You’ll also get a bonus point for each gem you match up as depicted on the side of the tile. There isn’t a penalty for not matching unless you aren’t able to match any at all. In that case, you lose two points.

You’ll keep all your points secret until the end of the game so make sure you flip them face down when you collect them. Which brings me to the next point: the game end. When the last tile from the Constellation Tile stack is moved to the row of available tiles, the game end is triggered. Note that it doesn’t end immediately! Each player, including the active player will get one more turn each. Remember how I said some constellations are discarded at the beginning of the game depending on how long you want the game to run? During that final round, randomly select from those discarded tiles to refill the available constellations row. This will ensure that every player always has three community cards to select from – even after the stack is gone.

Finally, I want to point out that the fun isn’t over when the winner is crowned. If you turn out the lights, you can enjoy the night sky that you’ve created. Of course, that only works if you’re in a dark room or playing at night. (Note that the gems aren’t lined up according to the game rules. I just couldn’t resist putting two side by side for a glow-in-the-dark photo and didn’t pay attention to placement.) You don’t have to be playing the game to simply imagine your ideal constellation configuration and create it! Which leads me to one last note. The designers encourage you to expand your horizons and play with different rules once you master the base game. There’s a variation where you can’t use O-Star cards as wilds and another where you can trade cards or reserved constellations with another player. Another version requires you to match all the gems exactly or you can’t place the constellation. There are also solo and cooperative instructions. Both these versions require you to place the pieces together to create an accurate depiction of the sky map.

Ultimately, you’re going to want to just play Constellations. The educational aspect is simply icing on the cake. Copies of the game are on Amazon for $25 or available for purchase direct from Xtronaut. Learn more about their passions and projects with their out of this world updates on Facebook and Twitter.

I love finding Orion. What is your favorite constellation to hunt for?