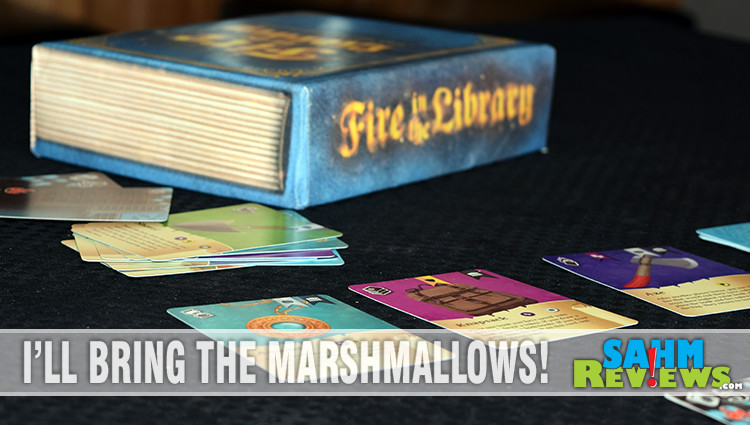 A couple weeks ago I told you about my unexpected DNA results, shared about my mother’s strong Italian lineage then explained that my physical features are a lot like women on my dad’s side of the family. One of those women is my aunt. We were close when she lived nearby but lately we barely see her once a year. After she graduated with her Masters of Library Science, she moved to northwestern Minnesota to take a job as a librarian. When I have a question about library stuff, she’s my go-to person.

However, I’m certain she would disown me if she knew I was damaging books for fun. Before you start thinking I’m dog-earing my books to mark my page, I want to make it clear that I’m not. I’m actually burning them completely. In my own defense, I unsuccessfully tried to save them first. So what do I do when I’m done? I pack up Fire in the Library and try over again on a different day in hopes of faring better. 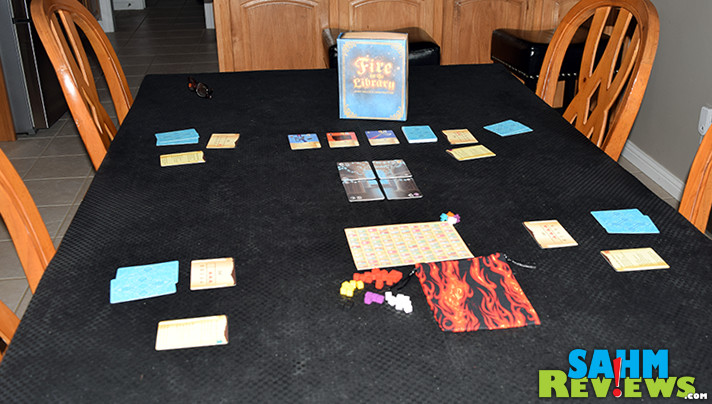 In case you hadn’t figured it out yet, Fire in the Library is a press-your-luck game from Weird Giraffe Games about a library that seems to have flammability issues. The goal of the game is to save as many books as possible before the fire sends them to an ashy grave. The more that burn, the more valuable the remaining ones become so saving them is even more rewarding. A couple years ago our library had a pipe burst causing the entire main floor to be flooded so It’s not like installing a sprinkler system would be the answer. To save these books, you need to be brave and run into and out of the building with whatever books you could get your hands on. 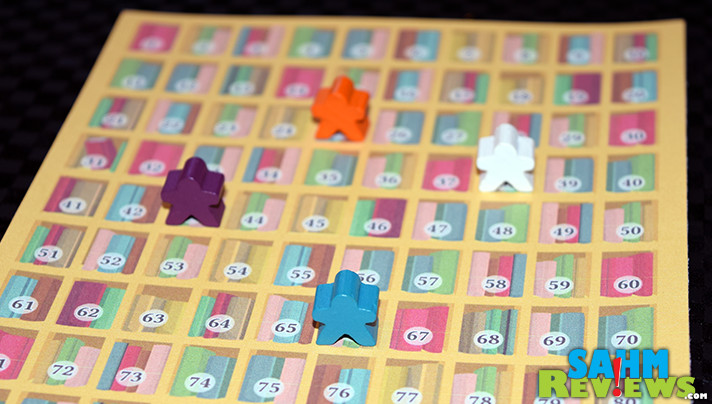 Before I go any further, I want to point out that the copy we have is a prototype for the purpose of sharing our thoughts, so please disregard the quality of the components such as the paper scoring track shown above. The final version, when it meets its funding goal on Kickstarter, will include custom pieces such as miniature books taking the place of the standard game cubes that you’ll see in our images.

The goal of the game is simple. Draw tokens from a bag and hope you get books, not fire. Books are indicated by white, yellow, black and purple tokens representing four different genres while fire is represented by (any guesses?) red tokens. Depending on whether you’re in a normal or risky situation, drawing one or two red tokens will trigger a fire. Let me go on record as saying that red was not my favorite color before and even less after playing Fire in the Library. 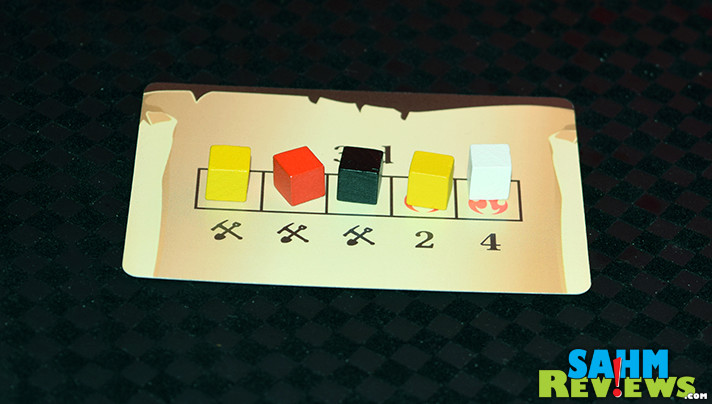 As you draw tokens from the bag, you’ll place them on your Turn Order card. Each card has different difficulty levels for when the situation is safe vs risky. It also has tiered bonuses to award you for your bravery when pressing your luck to save more books. If you draw book tokens, you can continue to do so until you reach the risky area or you can stop at any point, save those books and score points for your accomplishments.

But if you draw red tokens, well, that’s not good. You cause the fire to spread and unless you have tools to mitigate the fire, books of those colors will succumb. I’ll explain tools more in a minute, but for now, let’s assume you don’t have one. When the fire spreads and books burn, the Library is impacted and the values of remaining books increase. 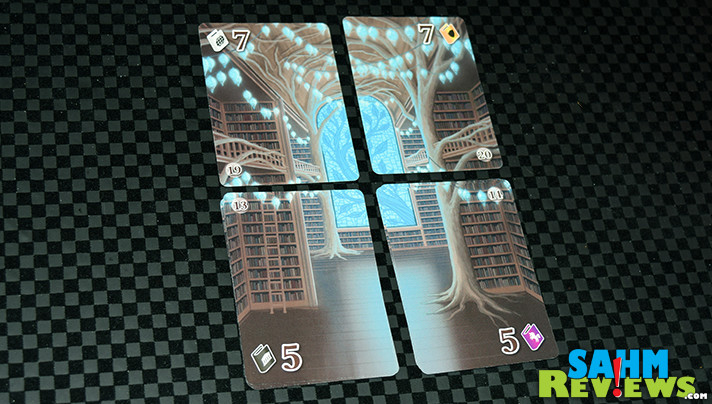 Fire in the Library includes Library cards that are arranged by type then placed in the center of the table at the beginning of the game. As the fire spreads, books that are damaged during a player’s turn are impacted in the center of the table. The top card is removed from the stack, thus revealing a card of higher value beneath it. If multiple books burn on a turn, multiple cards are removed from the Library sections. What’s interesting is that those cards beneath it may reveal that the fire is growing. When this happens, another red token is moved from the reserve into the bag! The game is over immediately when one section of the library is completely obliterated.

So let’s get back to those tools and how we can help save the books, control the fire or assist another player. Some such as an Axe, Bucket or Shovel can be used to immediately control the fire. Another example is a Tool card that allows a player to save a book and rescore it at the end of the game (when it’s probably worth even more)! There are a couple ways to earn tools, including earning one when you set a fire as well as when you don’t get into high risk situations! It’s important to consider how much you want to press your luck and whether you do or don’t have tools in hand can play a huge impact!

At the end of each round, players can discard a Tool card to grab a new one from the top of the draw deck. Fire spreads and the Library card with the lowest burn index is removed. Finally, players select their preferred turn order for the following round. This is done in reverse scoring order. The player with the least amount of points selects their turn order first, factoring whether they prefer a safe or a brave approach in the upcoming round. This method of changing up the turn order puts some control in the hands of the player who is having the least amount of luck. 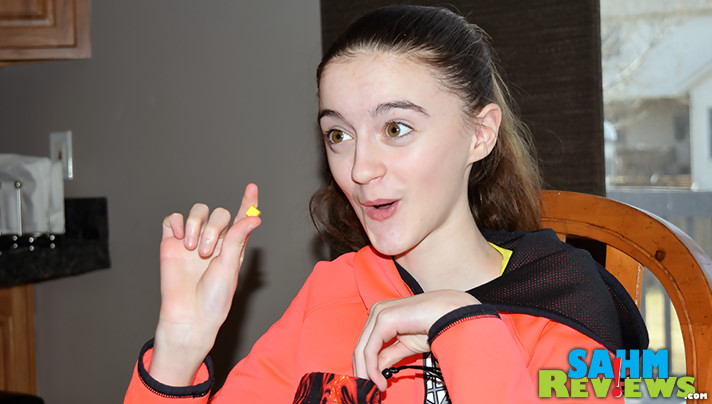 When I first read the details and instructions for Fire in the Library, it sounded like there would be a lot of down time between turns and rounds, but that couldn’t be further from the truth. The game moves quickly and you need to pay attention to the actions of others because you may have Tool cards that can be played when it isn’t your turn. Fire in the Library is a solid game and very well polished. Setup is quick, start to finish is about 30 minutes and it can be played solo or with up to six players. If this game was being released by a major publisher, I have no doubt it would be a trending topic in gaming circles as a must-have title. Don’t let the fact it’s a smaller publisher deter you from wanting to get this into your game library. You don’t have to be a fan of books to want to save them, you just need to have to feel like pressing your luck. Help save the library by supporting Fire in the Library is during their Kickstarter campaign. Learn more about what Weird Giraffe Games has on the books and is currently working on by following them on Facebook and Twitter.

If your library caught fire, which section of the library would you want to save first?

12 comments on «First Look: Fire in the Library Game»