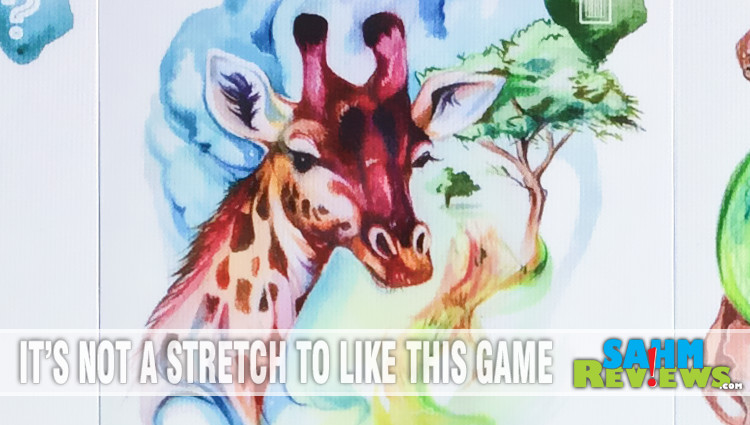 I think it’s about time we officially nominated game designer Hisashi Hayashi as one of our favorites. Our list of favorite designers is quite short as it takes a lot to impress us so much that their new games become an instant-buy. There are only a couple designers of Euro-style games that we hunt out – Stefan Feld and Uwe Rosenberg, and there are really only a couple creators of family-style games that seem to hit the mark with us every time. So when we mentally add a new name to this short list, for us at least, it is something special.

And it doesn’t hurt that this latest game is just stunning. Zooscape by Tasty Minstrel Games features amazing artwork done by Katy Lipscomb in a style that I would love to have hanging in our home. It also doesn’t hurt that Zooscape uses one of our favorite game mechanics that reminds us of our youth – “I split, you choose”. Who doesn’t remember having to choose from two pieces of cookie carefully split by your sibling?! 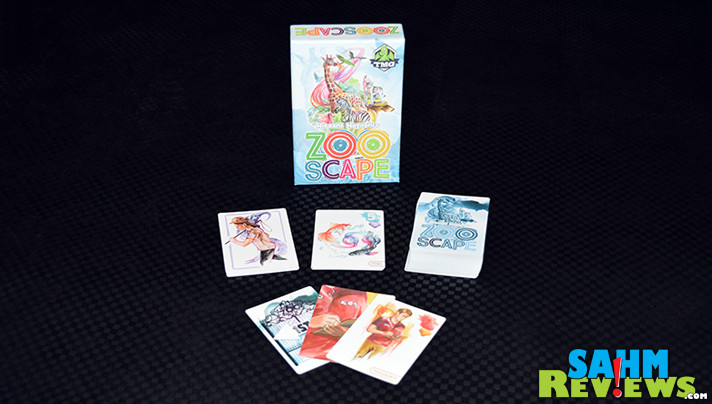 As you might imagine, Zooscape is about being a zookeeper. Unfortunately the animals are loose (apparently you’re not a very good zookeeper) and you must chase them down to get them back into their cages. The zookeeper who manages to collect the most animals without overcrowding their cages will be named the Best Zookeeper!

Each player (up to six) receives a “First” and “Second” Zookeeper card, with the first player also getting the Zoo Manager, Clipboard and Zoo Gate cards. The beautifully-designed deck of 74 Zoo cards are shuffled, dealt out into five stacks (the number per stack determined by the number of players) and the ten Fish cards are set aside in their own stack. All unused cards are returned to the box. 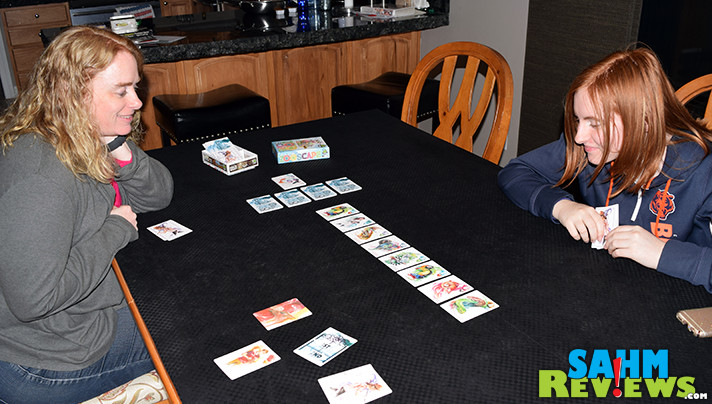 Each round one of the five stacks will be used, meaning the game only lasts for five rounds (about 30 minutes). The first player, the one with the Zoo Manager card, deals out all the cards in one stack into a single line in the center of the table without changing the order of the cards. They will then split that line into two groups, sliding the cards apart to be able to insert the Zoo Gate card between the lots. Each group must contain at least one card and the order cannot be changed during this splitting process. Lastly, the Clipboard Card is now placed into one of the groups, again sliding the cards apart to accommodate the new card. 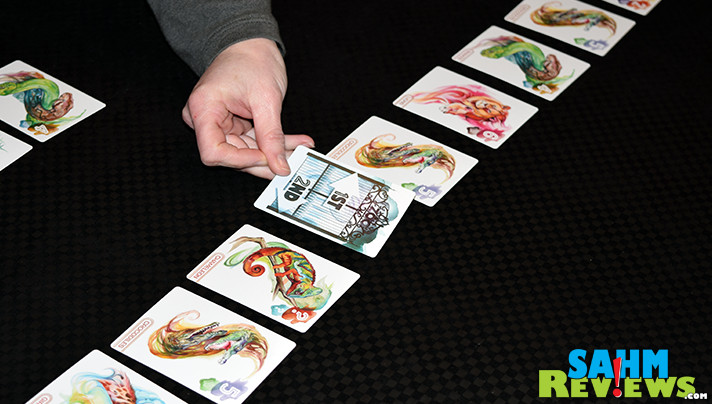 Now each player must determine which of the two groups they would like to chase. Each zookeeper privately selects either their “First” or “Second” card in front of them and simultaneously reveals it when the other zookeepers are ready. 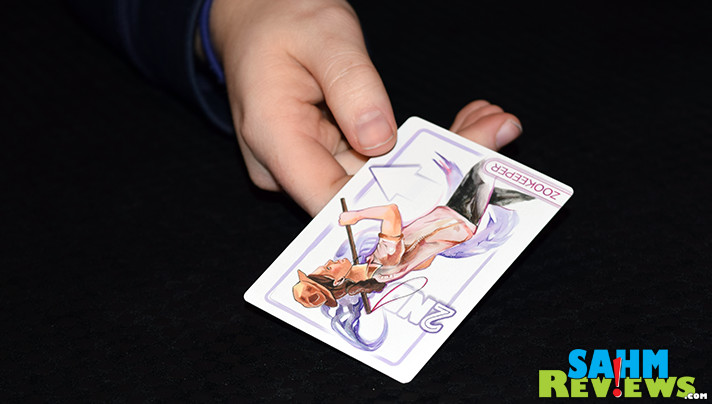 If you are the only player to select a particular group, you receive all of the cards in that group and are done collecting cards for that round. If a group was not selected by anyone, its cards are placed under the Clipboard card. If the Clipboard card was also in this unselected group, it is given to the Zoo Manager (including the cards underneath it) to be reassigned. 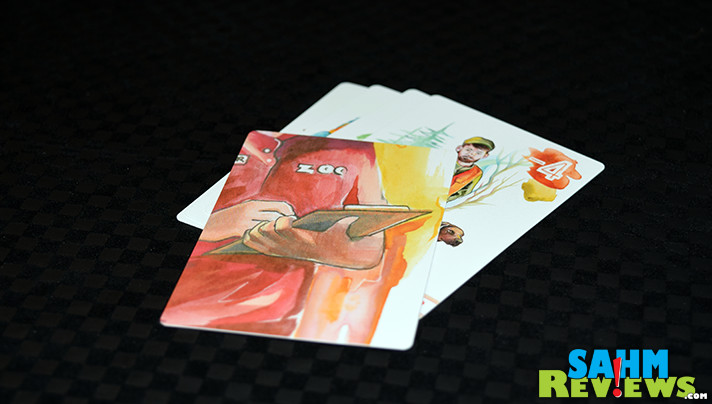 If more than one player selects the same group, that group must be split further. The Zoo Manager passes the Zoo Manager card to the player on their left, along with the Clipboard card if it is in their possession. The new Zoo Manager now splits the contested group into two groups in the same manner as before. If they have the Clipboard card, it too is placed into one of the two new groups along with the cards underneath it. Players who have not received any cards this round will now bid again for which group they want by secretly selecting their “First” or “Second” card. This continues until either all players have received a group of cards or until the cards can no longer be split (there is only one card left). Any zookeepers that did not receive any cards is given a Fish card as consolation.

The player holding the Clipboard card also receives any cards underneath it and becomes the new Zoo Manager to begin the next round. Four additional rounds are played in the exact same manner before end-game scores are calculated. 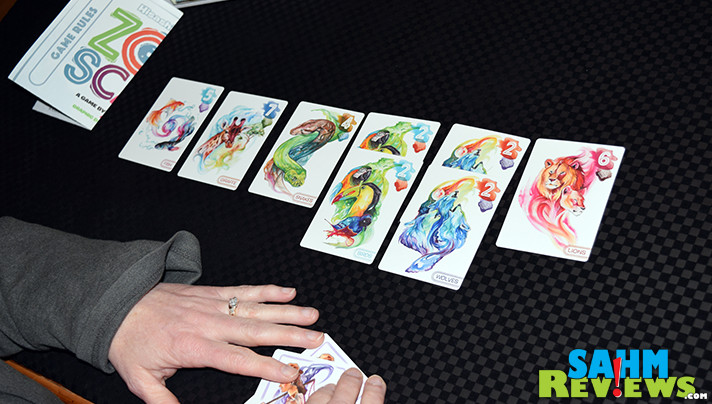 All cards collected are worth their point value at the end of the game as long as you don’t possess more than the cage limit printed on the card. If you have more than the cage allows, instead of scoring for each card, you will lose one point for all animals of that type. Hunter cards also subtract four points each from your total, and if you manage to collect a Wild Animals card, discard it immediately and acquire a random Zoo card from the unused cards in the box.

Chameleon cards immediately become a copy of the animal you have the most of, while Veterinarian cards force you to immediately discard two of your animals. Sum up all of your collected points and the zookeeper with the highest total wins Zooscape! If ties, the player with the highest number of animals is the overall winner.

Considering the low price of Zooscape on Amazon (currently under $11 shipped), it is well worth the price just for the beauty of the game. The bonus of good game play that forces you to make risk/reward decisions (or stick your opponent with unwanted cards) means it will hit your table quite often. There were no official rules about “table talk”, so we allowed deal-making before revealing our choices. Of course, not everyone always kept their promise, making for some interesting accusations across the table!

2018 is shaping up to be a banner year for Tasty Minstrel Games as they just launched their Kickstarter campaign for a Deluxified version of Gentes and have a number of other titles in the works. If you’re not already following them on Facebook and Twitter, you should be so you don’t miss out on any new product announcements!

What game in your collection do you consider beautiful?