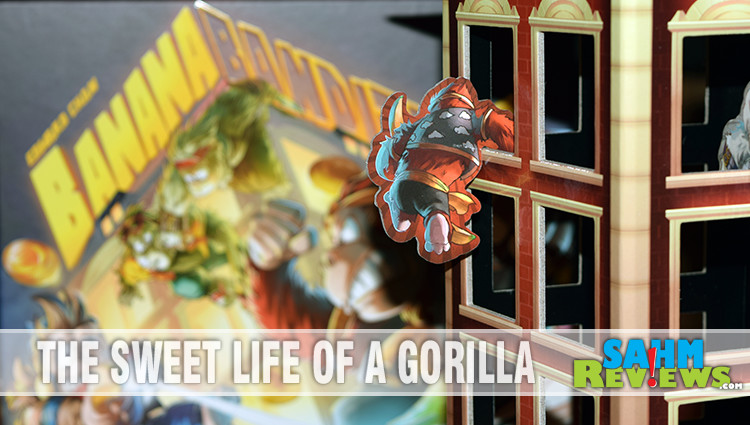 For us, the only things better than a board game are 3D board games! There is just something about games which utilize the third dimension that really gets us excited. So much so that we practically squealed when we found a 3D chess board at our local Goodwill. Even though we had no idea how to play, it quickly made its way into our shopping cart. 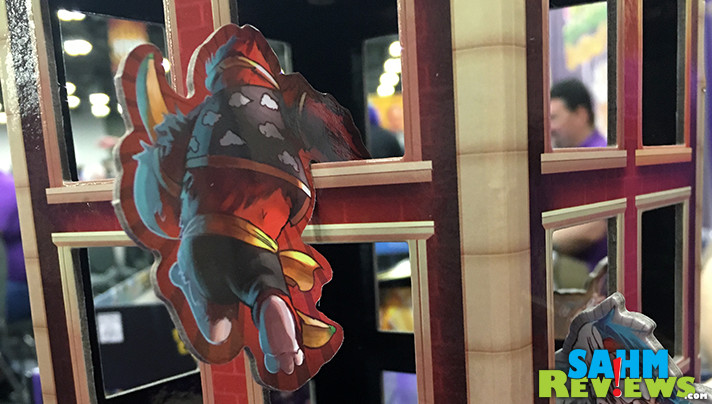 So when we spot a game that literally rises above others, we know we have to try it out. Such was the case when we spotted CMON‘s Banana Bandits at this year’s Origins Game Fair. In front of us was a tall tower with cardboard gorillas scaling the sides like a bunch of King Kongs in training. We sat down for a demonstration and ended up getting a copy for ourselves in August. 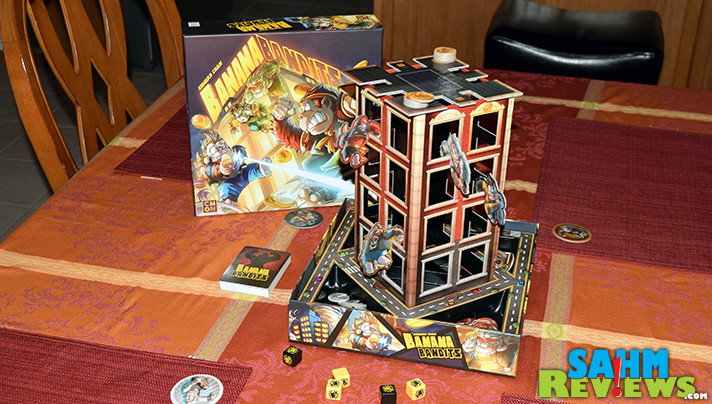 And we’re glad we did (well mostly, I’ll save our one complaint for the end). Fully assembled, the Banana Bandits tower is a whopping eleven inches tall and cleverly utilizes the box bottom to keep it upright. Also in the box are four different colored gorillas with matching coins, custom dice and a standard-sized deck of cards.

Banana Bandits is all about fighting the other gorillas and forcing them to drop their coins so you can pick them up. Each player is allowed to start their gorilla anywhere on the building by hanging it from one of the windows. On your turn you can spend up to three action points on a variety of actions. 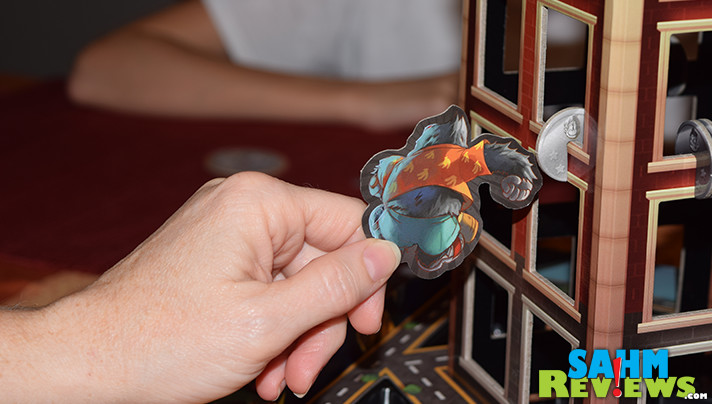 You can spend one to move up to three “spaces” in any direction except diagonally, even around corners! If you are orthogonally adjacent to another gorilla, or directly across on the other side, you may spend a point to fight them. Action points are also used to pick up coins from the tower and to draw your hand back up to five cards if you are on the bottom level. 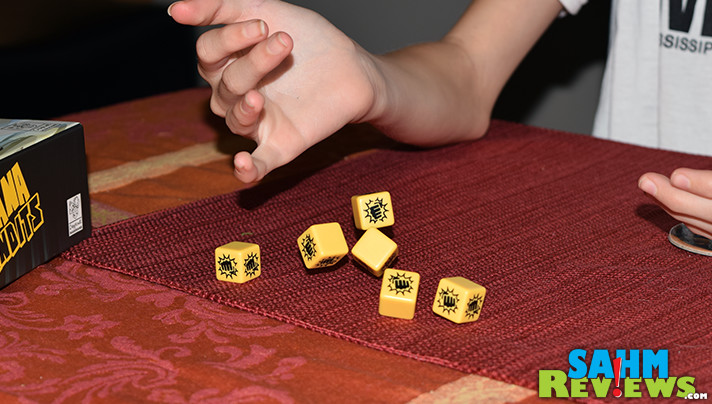 When fighting, each player rolls the six yellow dice and counts up the number of fists that result. If the attacker ties or beats the defender, the losing gorilla is pushed away three spaces in one direction at the discretion of the attacker. That gorilla also drops coins in every area he vacates. If the defender wins the battle, nothing happens. 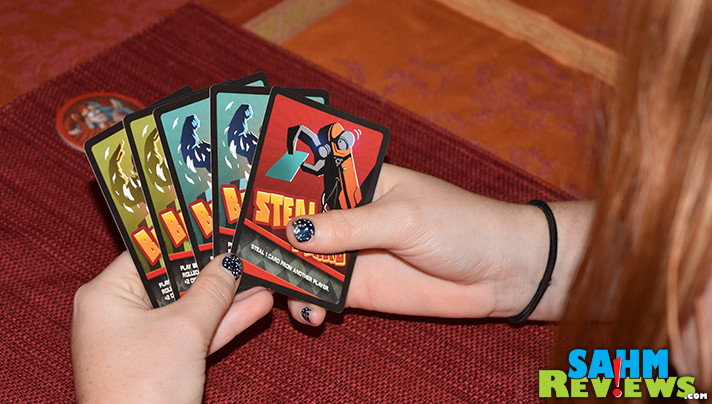 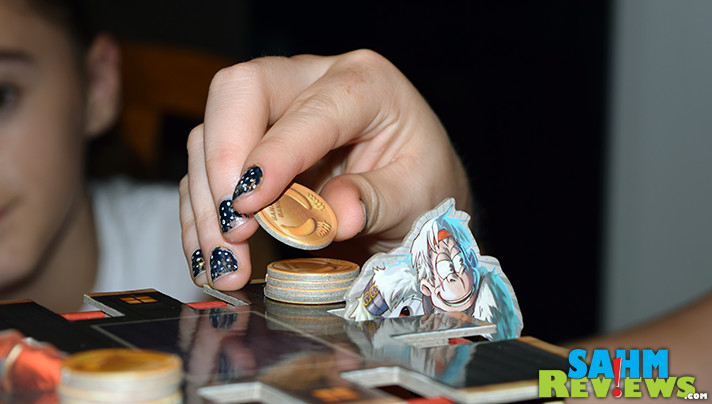 Another free action is to gather banana coins at the top of the tower. In order to collect one, you must turn in two collected gorilla coins from different opponents. If you have two sets of two you can turn them both in at the same time and grab two banana coins. This is ultimately how you win at Banana Bandits – the first player to grab three banana coins is declared the winner.

Now our complaint. Banana Bandits is advertised for 2-4 players. We’ve played at all levels (2, 3 and 4) and discovered that the rules do not include a 2-player variation. I previously mentioned that in order to gather a banana coin you must turn in two different gorilla coins, and you can’t turn in your own color, so it is impossible to gather two different colors with only one opponent! This seems to be an oversight, so we ended up devising our own house rules of allowing two of the same color to be submitted. 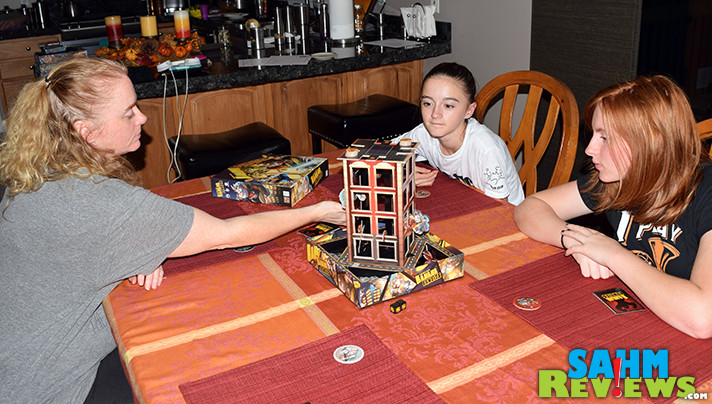 But that didn’t matter much to us as the game isn’t nearly as fun or challenging at two players as it is with the full compliment of four. With two players you’re just chasing one opponent around the board. With four, you have your choice of who to target and gorilla alliances are naturally going to form. The game is actually much quicker with four since more coins get on the board and when you collect, you collect all of them in one window.

Advertised for ages 8+, Banana Bandits really can be enjoyed by ages as young as 4 or 5, yet still entertaining enough for the adults to play along. I mean, who among us hasn’t imagined themselves as a giant gorilla climbing the Empire State Building fighting off airplanes to grab the girl? Not you? Maybe I’m the only one…

Pick up your on Amazon for under $30 or learn more from CMON’s product page. Their Facebook and Twitter feeds have been all abuzz as of late for an upcoming Kickstarter campaign. Be sure you’re following them to find out what all the excitement is about!