Those of you that grew up in the 80’s probably remember the game of Surround on your Atari 2600. It was one of the originally released games in 1977 for the new system and whose concept was later copied into the famous cycle racing scene in 1982’s Tron movie. It featured ever-growing lines that resembled snakes, racing around the screen trying not to run into the edge, another player or your own tail. The person who lasted the longest was the winner.

You can find many, many variations of this video game on the iTunes app store, but until now we hadn’t run across a board game version. We found this copy of Sudden Death at our local Goodwill, and although missing two pieces, it didn’t affect the game play.

Let me start by saying this game must have certainly won awards for the most annoying sound to ever come from a game. Powered by a 9 volt battery, the board includes a built-in mechanical timer that sounds an alarm when it reaches the end. You know the sound your smoke detector makes? I’d rather listen to that.

Up to four players are vying to be the last man standing in a game of Sudden Death. Each player receives 47 colored plastic pieces of varying length, each with a small arrow molded into one end. There are holes in the board to signify the starting space for each color, and a 48th piece included for each person to put their own color in that spot (like they couldn’t remember which side of the board they were sitting on…).

Since our copy had only been played by two players (the other two colors were still on the plastic sprues!), we decided to simply continue in this manner, using the smaller portion of the board as the instructions suggested. But first, the decades-old battery needed to be replaced and a bunch of corrosion cleaned with an old toothbrush and some vinegar.

Playing Sudden Death is quite easy. On your turn you simply lay one of your pieces on the board with the base of the new piece butting up against the arrow on the last piece you played. For your first piece you simply start on your colored marker (the one you put in the hole) or on the smaller board, in line with said hole. When you have placed your piece, depress the timer and the turn passes to the next opponent.

If you do not place your piece by the time the alarm sounds (and you WILL know exactly when that happens), then you lose two 2-length pieces from your reserve. Start the timer again and place your piece, resetting the timer once again for the next player. Oh, and there are two modes for the timer – regular and pro! Trust me, the pro setting is HARD! 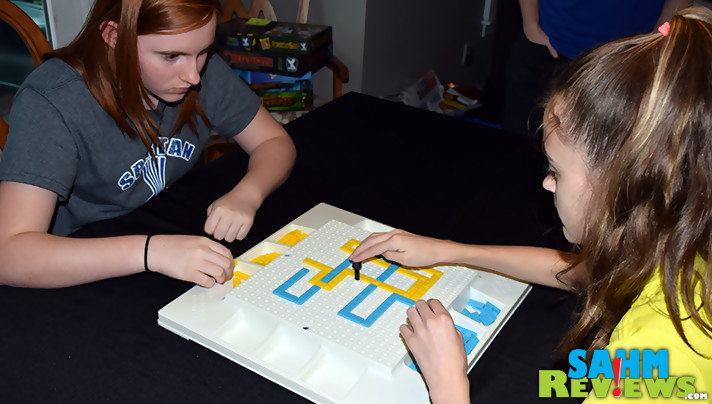 Unlike the video game, you may jump over single lines. But if there are two or more spaces occupied in the direction you wish to move, you may not place there. In addition, you may not close your path by making a loop/circle unless an opponent has at least one piece inside of the area. Get caught in a position where making a loop is your only choice? Go ahead and do so, but your game is over.

Just as in the video game, your best strategy appears to be to stay away from everyone else until a couple of them have been eliminated. With 47 pieces to play with, you shouldn’t find yourself locked into a corner very soon, just remember to keep some short ones handy in case the timer goes off or you need to jump a line in a tight spot. As I mentioned before, the last player standing wins!

Sudden Death was issued just one time back in 1978 by Gabriel. Gabriel was later bought by CBS, then sold to View Master who was later acquired by Mattel. Apparently the original didn’t sell very well as none of the company’s successors elected to reissue it.

But thanks to eBay, you can still find copies available for around $15 shipped, which is actually a pretty good value considering the size of the box. Before you buy a copy, be sure to check the underneath for battery corrosion and make sure the mechanical timer is operational. That is, unless you decide you’d prefer to play without the alarm sound. I know we removed the battery right away…

Are you old enough to remember the Atari 2600? Did you own Surround?