Thanks to crowdfunding sites like Kickstarter and IndieGoGo, bringing a board game to market has become easier than ever. There are dozens of domestic and foreign manufacturers ready to take your project from idea to reality. Marketing via social media helps get the word out, and easy-to-configure shopping sites using Shopify means a publisher can quickly offer them for sale. And let’s not forget about Amazon – you can buy anything your heart desires there, even board games!

So it should come as no surprise that the vast majority of new game publishers take this route to get a start on what they hope will be a long career in the hobby game world. A successful Kickstarter can not only pay for the first run of product, it can fund additional copies for retail and still have some left over to reward the creators and give them motivation to begin working on their next project. But there’s a very different story to tell about Devir Games, a brand new (to the U.S.) game publisher that has actually been around for 30 years!

Their story is an interesting one to tell, and apologies in advance if I don’t get all of the details exactly correct. We sat down with a couple executives during the Origins Game Fair and got the real scoop of how they came to be and where they’re headed.

Back in the late 1980’s, a group of friends, who happened to be huge comic book fans, were looking for a way to get the latest issues into their country. They lived in Brazil, and other than a few translated issues, could not fulfill their desires to read all about the latest Marvel and DC superheroes. They began by making a trip to the U.S., eventually all the way to Denver, where they purchased comics in bulk and shipped then back to their country for resale. This began their path into getting the license to translate and distribute comics (officially) in Brazil.

Some time later they were able to capitalize on the Magic the Gathering craze by signing up to be the Latin America distributor for the popular card-battle game, eventually extending that agreement to cover Spain and Portugal. It’s no secret that the makers behind the Magic game were basically printing money, and the revenue Devir Games saw from the game’s success helped push them into the board game world.

They began slowly with titles made only for the Spanish and Portuguese market, Europe being a hotbed of activity for more difficult games. But they never forgot that their success was due to a random trip to the United States and decided to have their titles translated and offered to their fans abroad. Thus began their official entry into the North American Market. Not with one title like most new publishers, but an entire line of already successful games!  Who knew what we were missing!

What about the name? What exactly does “devir” mean? Loosely translated from Portuguese, it means “what is to come”. After talking with their representatives, I could sense their excitement – not only about what they were demonstrating at this convention, but what was coming down the pipeline in the near future!

So today I’d like to tell you about a handful of games Devir Games has already brought to market and is beginning to retail them in the U.S. I think you’ll find good variety in the titles, and we can attest to the quality of their manufacturing. While this article covers some of their small box games, don’t fret. They also have a burgeoning line of Euro-style games we’ll be featuring in the very near future! In the meantime, let’s take a look at these very affordable offerings. 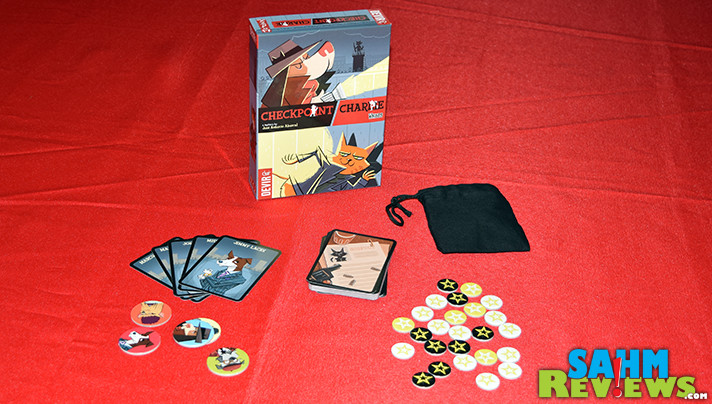 This one caught my eye because I had the opportunity to visit the famous Checkpoint Charlie in the late 70’s during a family trip to West Berlin. This card game puts you in the role of a hound dog, watching for feline spies trying to make their way into the West via this gate. 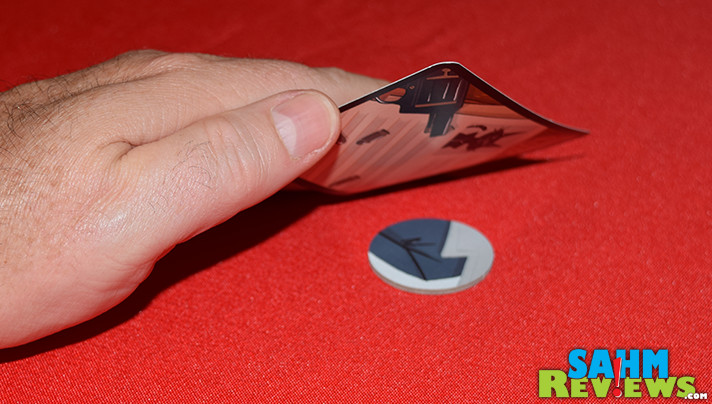 Each player receives a hidden clue counter that gives you information about the master spy you’re trying to catch in this round. This might be whether he’s carrying a newspaper, wearing glasses or clues as to what he is wearing. On each player’s turn, they will draw one suspect card and decide whether or not their hidden clue matches the description of the accused. If so, the card remains in front of you. If not, it is discarded. 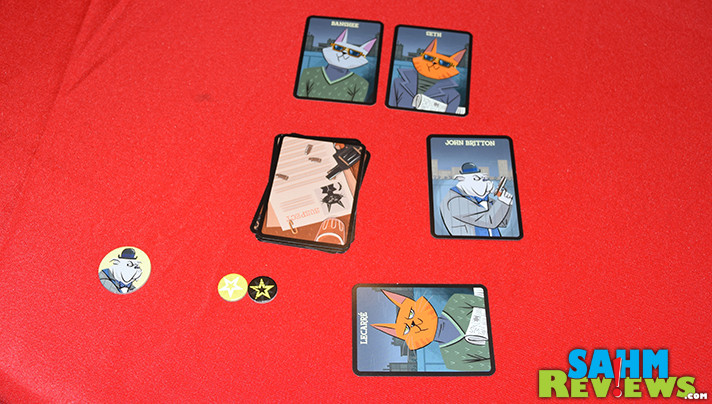 Because you don’t know what the clues are that your opponents hold, it is up to you to determine by their collected cards what the right info is. Only once you think you have all five clues figured out may you make an accusation by placing your pawn on top of the matching suspect card that exhibits all five clue items. Play does continue until all but one player has made an accusation (players may not accuse a suspect that has already been accused). You need not match all five clues to be successful as the master spy does have accomplices. Matching four of the clues is all you’ll need to catch those! 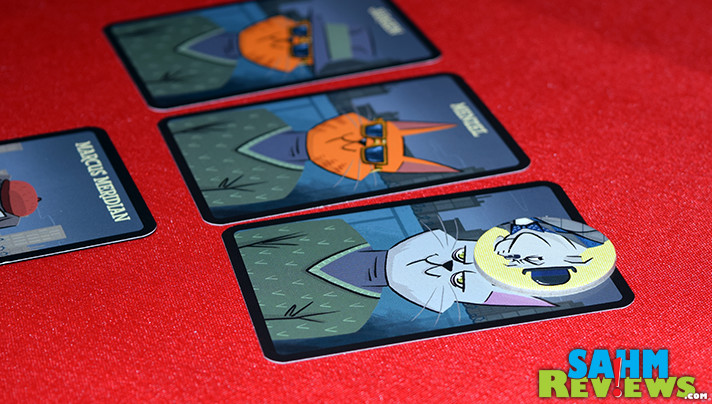 Once all accusations have been made, players reveal their clues and the accused suspects are checked to make sure the correct ones were caught. The person who correctly accused the master spy receives one random gold scoring token, while a while token goes to anyone who caught an accomplice. An incorrect accusation, or no accusation at all, nets you a black token. 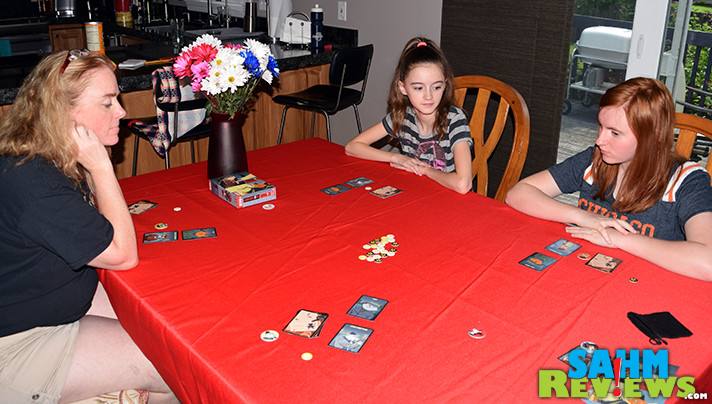 Supporting up to five players and an entire game lasting under 30 minutes (play five rounds or until one person has 10 points), Checkpoint Charlie is appropriate for nearly all ages. While the box does advertise 10+, this could easily be played by children as young as six or seven. Find your copy on Amazon for under $30 shipped! 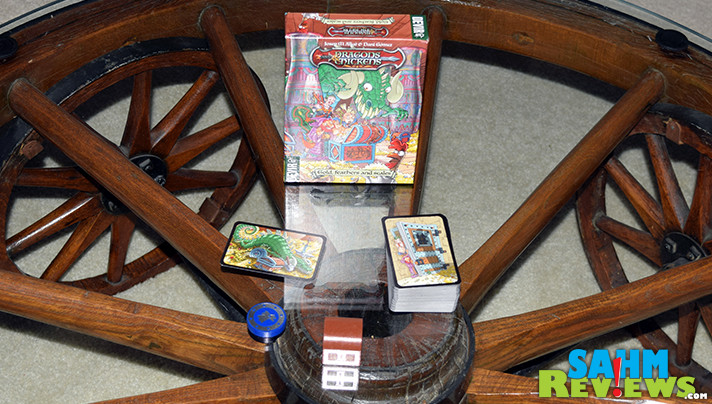 This 20-minute card game’s design reminded us of Dungeons & Dragons, right down to the sword through the middle of the logo. And I guess that’s appropriate, since the theme of the the game is that of adventurers in a dungeon, trying to bring the most treasure to the surface. 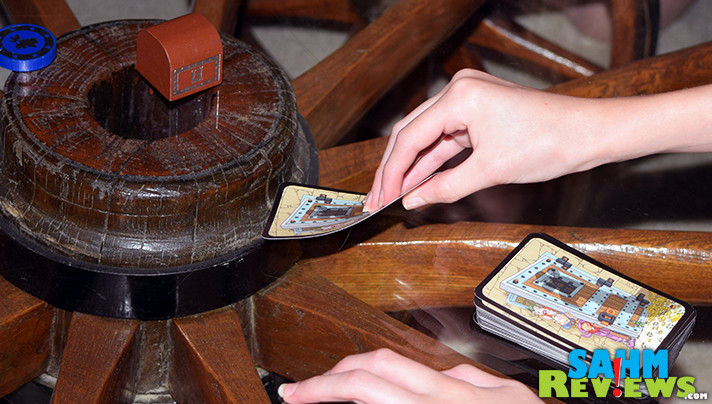 The entire deck of 100+ cards are dealt equally to up to five players. At the same time all players will flip and reveal the topmost card of their deck, discovering what treasures were in that particular “room” of the dungeon. On each card there are two types of treasure (out of a possible six), all of equal value. 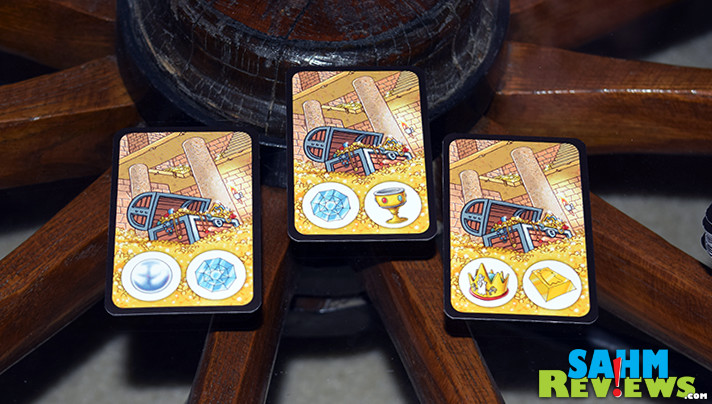 When all cards are revealed, the first player to call out which treasure type is the most abundant takes all of the cards played in that round. But it’s not quite as simple as that! There are many times the top spot will be tied by two or more treasures. In this situation, the first player to grab the included wooden treasure chest gets all the loot! 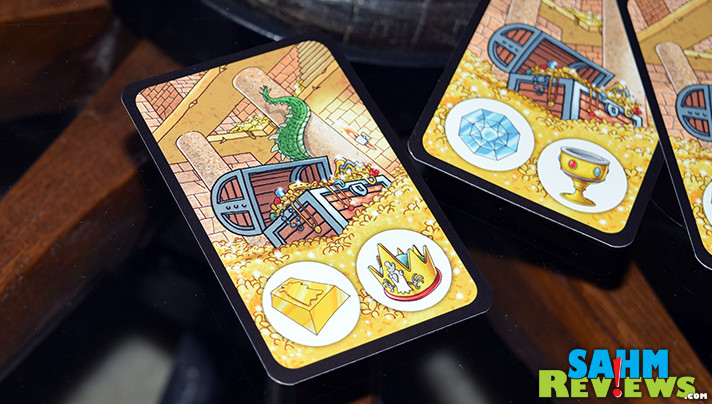 This treasure isn’t always just laying around waiting to be collected. Some of the cards include a Dragon, and when one appears, all players must rush to the protection of their shield. Players race to stack their hands on the wooden shield token, and whomever is last loses any treasure they have already collected that matches the treasure on the Dragon’s card.

So what’s with the Chicken in the name? Everyone knows that Dragons cannot resist a good roasted chicken. So if you’re the last to hide behind the shield, you can elect to toss him one of your chickens (if you collected one on the way). And if that wasn’t crazy enough, some treasure cards depict a dark room and others lit via candle. Regardless of what treasures are the most abundant, when a treasure in a dark room is flipped, any player may try to steal it by putting their hand over the card. Plus, doing so before anyone calls out which they see the most of, alters the number available!

Once all the cards have been played and resolved, the adventurer with the most treasures (of all types) is the winner. Extra chickens become the tie breaker! Another one that is well-suited for the young members of your family due to the speed requirement. This one is also on Amazon for around $20! 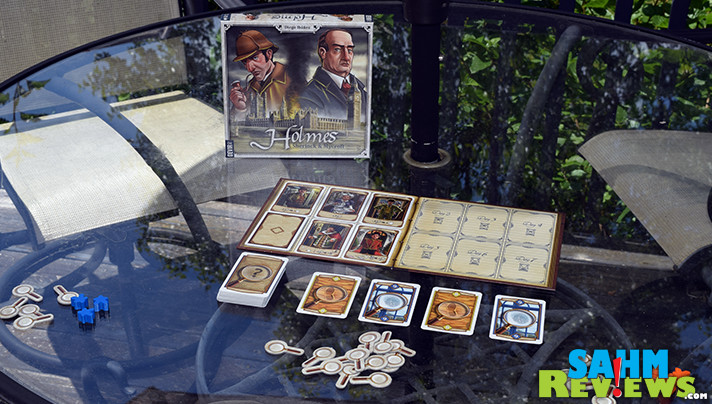 Of these first three games, Holmes – Sherlock & Mycroft will be the one that appeals to the more serious gamer since it utilizes a number of mechanics often found in the most difficult of euro-style games. In Holmes, two players each take on the role of one of the most famous investigative brothers of the era – Sherlock & Mycroft Holmes. There’s been an explosion in the Houses of Parliament and a young lad by the name of Michael Chapman has been arrested. You must prove his innocence before your brother does. 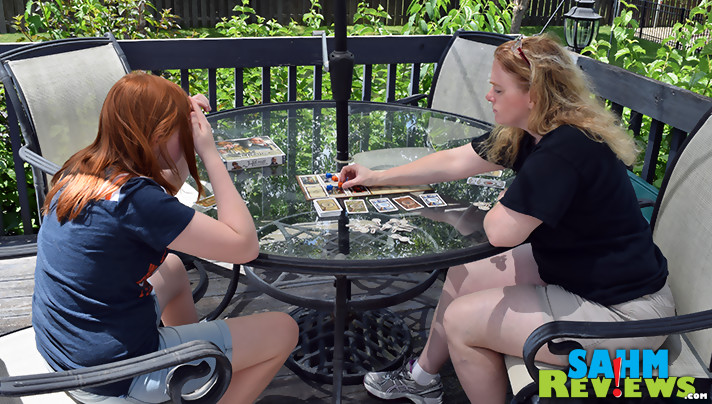 Each game of Holmes is seeded randomly with character cards that will act as actions. Three starter cards along with two random “Day 1” cards are placed on the included board. Every investigator receives three action markers in their player color along with five investigation markers. 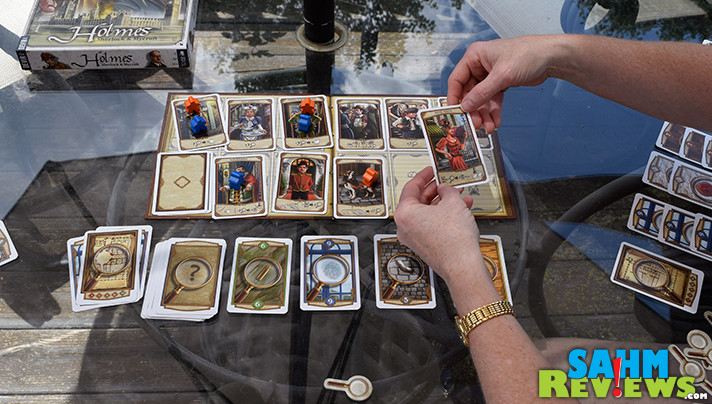 The game lasts only seven turns, representing each day of the week. On your turn you will place one of your action markers on one of the character cards, taking the listed action. Your marker is placed laying down to denote its use this round. You may not place another marker on any character in which one of your own is already on. Some of the characters will award you additional investigation markers, while others might give you clue cards at the cost of your investigation markers. 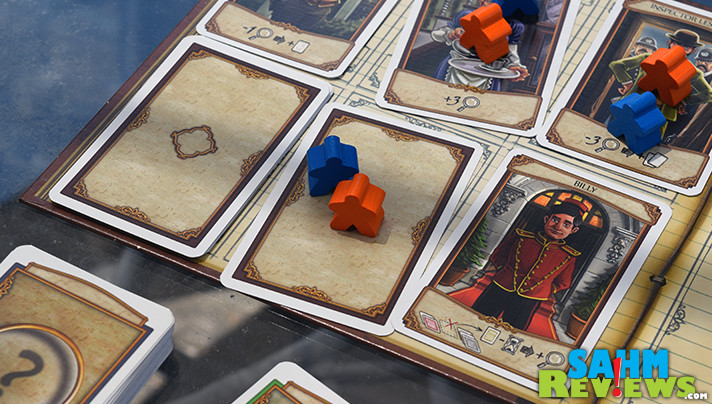 At the end of each round, if a character has two action markers on it (one from each player), that space cannot be used during the following day. Flip that card upside down for the next round and add one new character to the board from the draw pile. 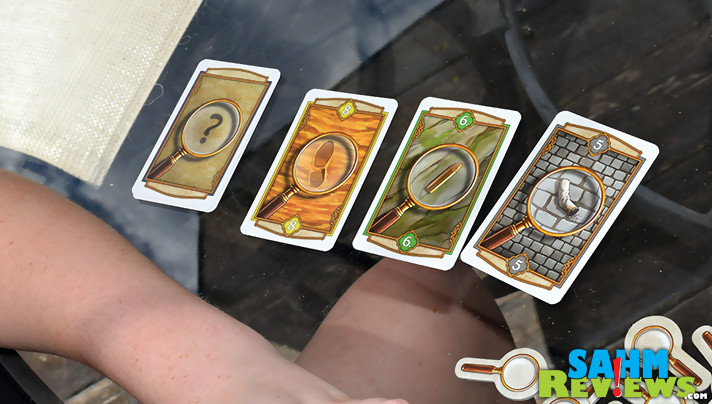 Holmes – Sherlock & Mycroft is ultimately a game about set collection. After all seven days have passed, the collected clues are compared by type. The player with the majority of each type of clue will receive the value of that clue less the number of clues of that type held by their opponent. Collecting all clues of one type also awards three bonus points! Map fragments are a special type of clue that are scored separately and vary according to the number you have collected. Wildcards represent any of the clues, except for map fragments, and must be assigned before the end of the game or three points will be deducted for each one still in your possession.

As mentioned earlier, Holmes – Sherlock & Mycroft uses a more advanced mechanic of action selection (and action lockout) that makes the recommended age of 10+ right on. It is the only one of these three games that only supports two players, but at under $22 on Amazon, might just be the best value of the bunch!

After checking out these first three titles by Devir Games, I must say we’re excited to see what else they bring to the North American market in the coming months. Stay tuned for an overview of Rhein: River Trade, a transportation-themed game with card drafting and bidding where you want to simply be the player with the most money at the end of the game!

But in the meantime, be sure to check out all of their titles over on the official Devir Games website, and subscribe to their Facebook and Twitter feeds so you’ll be among the first to know about which games are going to make their debut stateside. And you can enter to win one of the three games featured in this article right now by entering using the form below! Three lucky winners will each receive one game (assigned by us randomly) shipped directly to them by Devir Games!
Devir Games Giveaway