It’s that time of year again: the dreaded winter. Thankfully, this time around it’s different; we aren’t sitting in the middle of a snowstorm or heaps and piles of snow. It’s also the time of year when people spend a cold and blustery Sunday hunkered down in front of the TV. We’re handling that a little differently, too. Don’t get me wrong; we’ll surely be snacking on chicken wings and tuned in to watch some really awesome commercials on Sunday. But while some of you may find yourselves placing bets on the big game, we will be placing bets on camels!

Camels racing in the desert. It seems like a logical plan since it’s the warmest winter in years. (Yes, I’m knocking on wood right now!) Maybe it isn’t THAT warm. We don’t exactly have camels running around, but we do have them on our game table in the form of Camel Up by Z-Man Games! If I were a betting person, I would put high stakes on the fact I would lose less money wagering on camels than on the big game.

You’re probably asking yourself what the deal is with the camels. Hold tight because I’m going to tell you! Up to 8 people are invited to watch and bet on the camel races in Egypt. Five colorful camels will compete in this multi-legged competition. Along the way, we’ll bet on which we think will lead each leg, which will take the overall win… and which will bring up the rear. When the race is over, whomever has the most money wins. Sounds simple, doesn’t it? Don’t race ahead of yourself there. This game has a whole lot more to it. Like upside down pyramids, mirages and oases. I just learned that’s the plural version of oasis, by the way. Even at 45+, I am still learning things from games! 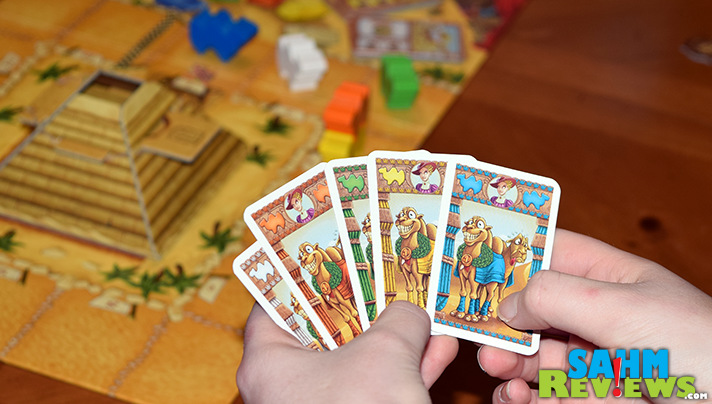 Each player begins the game with a betting card for each camel. These will be used to place bets on the final race outcome. But the camels don’t run willy-nilly around the track. When they move will be determined by the players and how far will be based on their corresponding color-coordinated die containing the numbers 1, 2 and 3. These colored dice are stored in the pyramid until someone is ready to move a camel ahead. The game is divided into legs, represented by each camel being assisted once.

On their turn players can take one of 4 actions. If they’re pretty sure who will be in first or second, players can grab a leg betting tile. There are three tiles per camel stacked alongside each camel’s tent. The top tile on each stack is valued at 5, the next 3 and the last 2. If a player thinks that particular color camel is furthest along at the end of the first leg, spending a turn grabbing that tile will net the winner the tile’s equivalency in Egyptian Pounds. Second offers a consolation prize of one Egyptian Pound. Being in 3rd, 4th or 5th causes the gambler to lose a pound. This leg betting process repeats after each leg of the race – meaning after the 5th camel is assisted along the race path.

Another option is to place a desert or oasis tile in an empty space that causes camels to move one forward or one back when finishing a move on that space. The person who placed the tile is awarded a pound every time a camel lands there so utilizing this mechanism is an alternate way to make some cash on the race.

A third option is to assist a camel by rolling a die. This is an interesting option because the player doesn’t get to select WHICH camel it wants to help. It’s completely random based on which comes out of the pyramid that contains all the dice. The pyramid has a sliding mechanism that allows only one die to come out at a time. Depending on the roll, the camel will advance one, two or three spaces. 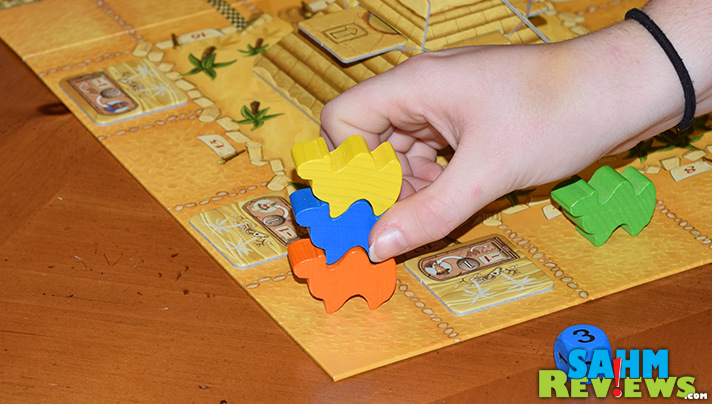 If it lands on a space with another camel, it lands on top of it and hitches a free ride. If a camel below it is assisted (by another player as their turn option) then the top camels move forward as well. Only one camel’s die is rolled per turn, but depending on stacking, multiple camels may advance. If players opt to utilize one of the other turn options then a “leg” can last a few turn rotations. Depending on rolls, carries, mirages and oases, It may take multiple legs for the camels to make their way around the board.

The fourth and final turn option is to bet on either the overall winning or overall losing camel by placing one of your five race betting cards from your hand into the appropriate space. After at least one camel crosses the finish line, these cards are evaluated. The first player to correctly predict the winning camel is awarded the most winnings, the second additional and so on. The same is true for the first to predict the losing camel. Any bets against the winner must pay one pound to the bank. As a result, a couple players may hedge bets early in the game but most will wait until later rounds when a clearer winner can be determined.

Despite the gambling premise, Camel Up is very much a family game with an easy learning curve that can accommodate various sized groups. Camel Up is available on Amazon for right around $40, a fair price for a game that plays up to 8!

Hump on over to the Z-Man Games website to see their vast selection of games. Race to their Facebook and Twitter channels to get the latest details on new releases. Let them know what other games you would like to see featured here.

Have you ever seen a camel in person?

10 thoughts on “Camel Up Board Game Overview”