If your kids are anything like mine, they’ve spent countless hours on their iPads, game consoles or your PC building a virtual world in the highly-popular video game, Minecraft. At first I didn’t ‘get it’, it just seemed like digital Lego pieces that you also had to “mine” before you could do anything with them. Why not just use real building blocks? Then I watched them play on a server where dozens of people were working on the same city. One brick at a time they were creating something impressive, and none of them had met or even knew the other players. Yet they were all working towards the same goal without hesitation. If only the real world operated this way. 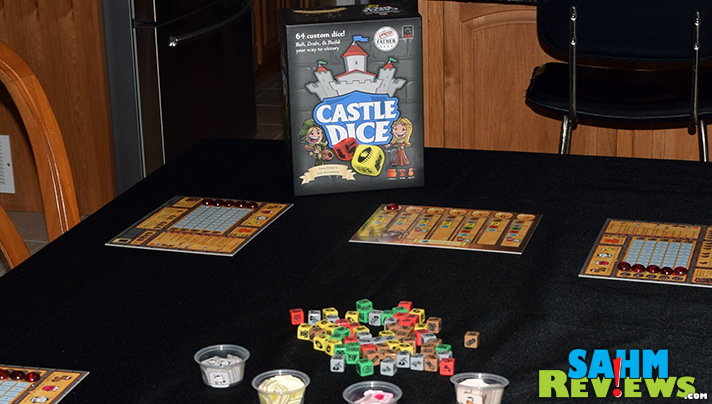 About the same time as my girls were deep into Minecraft, we got wind of an up-and-coming offline game based upon the Minecraft world. As the eventual publishers, Fun to 11, explained later, they were unable to procure the license to theme their game in the Minecraft world, but took the rejection as an opportunity to redesign their game to be more generic, resulting in a more market-friendly title. That’s when the final iteration of Castle Dice was born.

Not being comfortable with the whole Kickstarter premise at the time, I watched as Castle Dice met and exceeded their funding goals by over 30% in 2012. The follow-up expansion campaign a little over a year later nearly tripled their goal and almost exceeded the original campaign in total dollars pledged. It was no doubt that the need to redesign the theme had not hurt the demand for Castle Dice and probably guaranteed its success much longer than if it had been based upon a waning video game property. 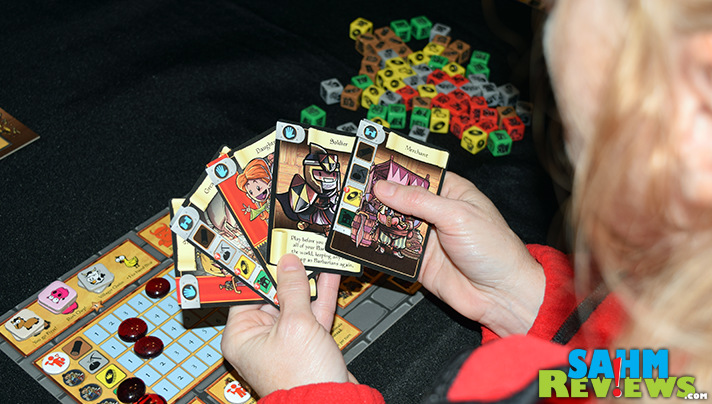 So what do the 1-4 players of Castle Dice do? They have seven rounds to build the most majestic and prosperous castle, gaining victory points from their Castle cards, Market cards and any bonus end-game points. Each player receives a play mat and tracking beads which they will use to keep track of their resources, animals and much more. 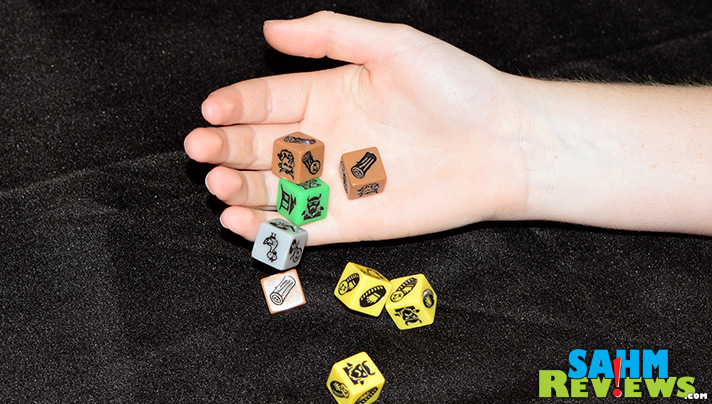 On your turn you will draw cards from either the Castle deck, the Village deck or both until you reach a hand limit of five cards. After all players have drawn, each takes the dice listed on the turn tracker for that turn. Each player also chooses a number of extra “Choice” dice and can be of whatever type as long as there are still some in the dice bank. Then everyone rolls all their dice at the same time and pools into the center of the play area (any Barbarians rolled are added to that player’s camp). 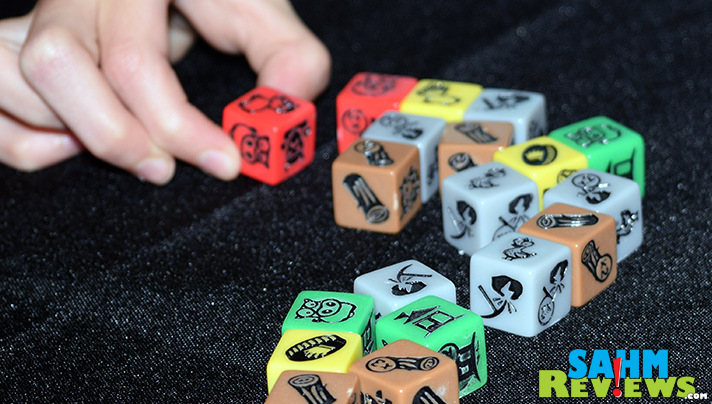 In order, players choose one die from the pool to gather. If the die has a resource shown, add them to your silo by moving the tracking bead forward the correct amount. If an animal is shown, take the appropriate animal token from the bank and add it to the matching part of your barn (on your player mat). After all dice are claimed, the next step begins. 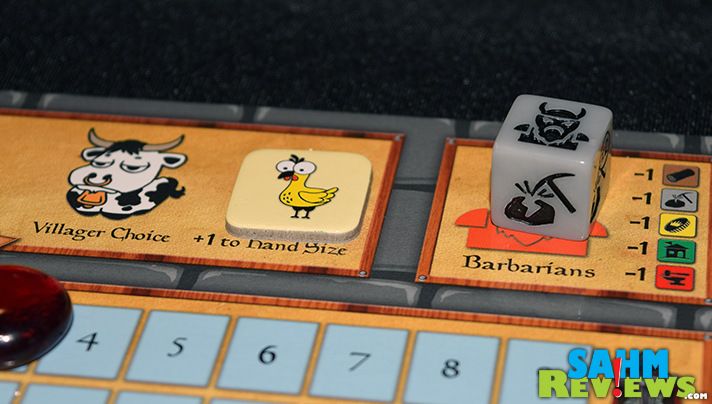 Now you get to “go to market” where you can turn in sets of animals for additional market cards. Market cards gathered this way do NOT count against your hand size! Next your workers produce an extra resource of the type they are on and then once for each merchant you possess you may discard a resource to trade it for another resource that is one lever rarer. 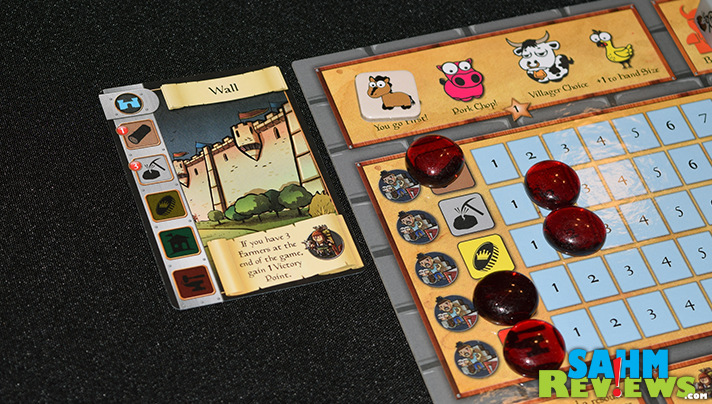 Once all merchants have been resolved, players may build Villagers and buildings from their hand of cards. You may build as many as you have resources to pay for (the costs are listed on each card). Once a building is built, pay the costs and place the card next to your play mat. If you’re building a Villager, take the appropriate token and also place it in the correct area of your play mat.

Lastly the Barbarians raid. For each Barbarian on your mat you must reduce all of your resources on your mat by one for any that don’t have a guard protecting them. Once done raiding, all Barbarian dice are returned to the bank. Unless this is the seventh round, go back to the beginning and draw cards to start the next round! 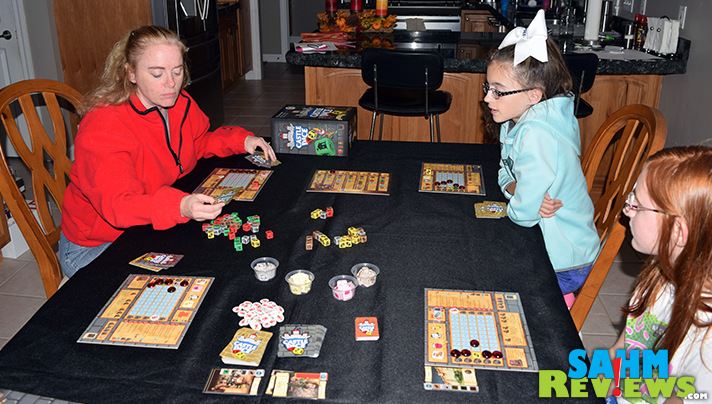 Being the player with the most of an animal gives you special ‘powers’ to use during the game. For instance, having the most cows allows you to change one of your Villagers to any other type after choosing which dice to roll for the turn. Villagers have their own powers (guarding from Barbarians, upgrading resources, etc.), and come in handy when the dice don’t roll in your favor! 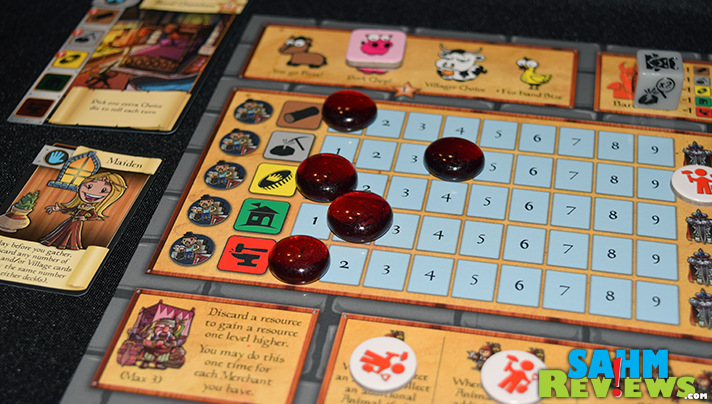 We were happy to discover Castle Dice as we didn’t have anything similar in our collection, and can definitely see the similarities with Minecraft. All things being equal, the game is just as fun as it would have been with the theme – and it is probably a whole lot cheaper as a result! You can find brand new copies on Amazon for around $55 shipped and the expansion is less than half that price!

I would expect to see more issues from this line (just like Minecraft expansions), so keep an eye on Fun to 11‘s Facebook and Twitter feeds to be the first to know!

How many in your household play Minecraft?