I admit it, I’m guilty. Guilty of buying a game just because the components are cool. This week’s Thrift Treasure isn’t the first time I’ve paid a buck or two just to have some cool minis, unique currency or custom dice. Last year I found the neatest Yahtzee set with black and red dice. I already had the game, but for 88 cents it was a steal for the dice. I’ve used them a number of times at our weekly game night playing other games like Risk Legacy instead of passing around a standard set. 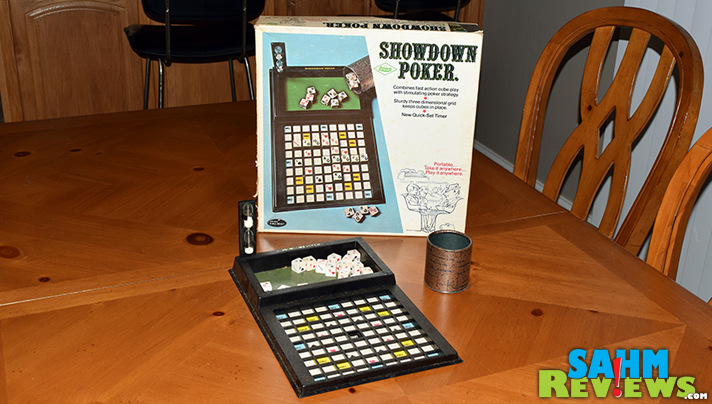 This copy of Showdown Poker by E.S. Lowe (the guy behind making “Bingo” popular in the U.S.!) has fifteen custom playing-card-themed dice that I knew I could find a use for if I didn’t like the game. They are made of a lightweight wood, painted white and then pad-printed with card numbers/faces and suits. But before I plundered the game for the dice, I figured I might as well try it out. Turns out Showdown Poker is a cross between poker and Scrabble, and really isn’t that bad!

Showdown Poker was issued in 1971, back when game manufacturers tried hard to include everything needed to play. In the case of this game, that meant a sand timer that hooked directly onto the plastic board. This board has recessed areas that allow for easy placement of the dice without worrying that they’ll move, and a special rolling area. And it wouldn’t be complete without a handy dice-rolling cup!

On your turn you would roll all 15 dice and arrange them in order by suit. When ready, the timer would be turned and you would race to place your dice in ‘hands’ on the board. Just like in the real game of poker, a hand is a set of 5 dice (cards). The first set must be laid on the board so that it crosses the “Start” square. Subsequent hands must connect with a previous hand, Scrabble-style. 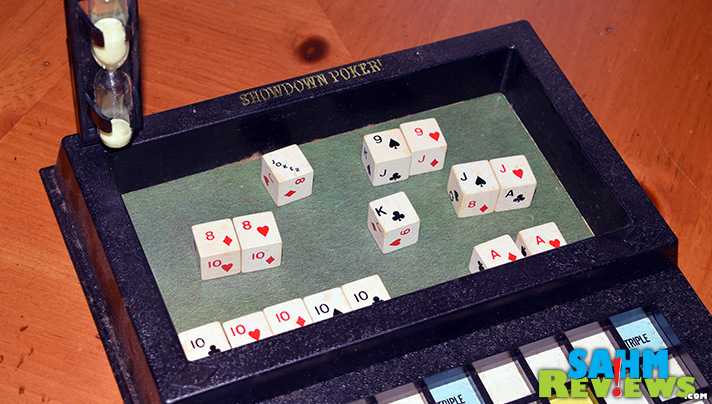 There are twelve pre-printed spaces on the board with a poker card displayed. These may be used in any hand, or covered up by another die if it doesn’t work in the hand you’re trying to create. Six of the cubes have a “Joker” on them which can be used as a substitute for any other card, but with a limit of one per hand. 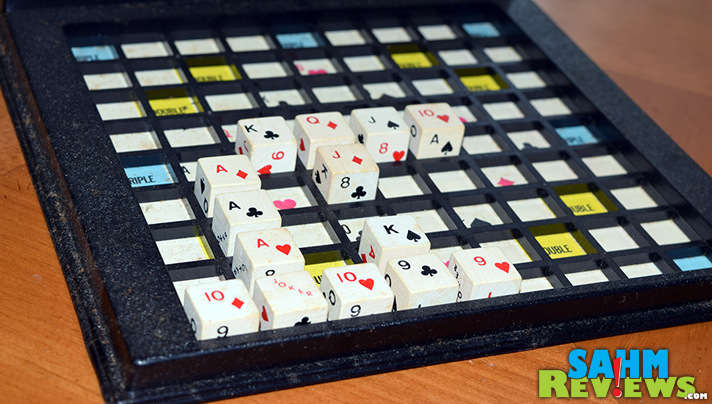 When the timer runs out or you stop because you are satisfied with your arrangement, you’ll take a tally of your score. Each hand type is worth a varying number of points. For instance, one pair is only worth 2 points, a flush rakes in 20 points and five-of-a-kind (four plus a joker) nets you a whopping 150 points! If your hand crosses either the “Double” or “Triple” squares on the board, then you multiply that hand total by 2x or 3x!

Each player takes turns rolling and scoring (one at a time) until a pre-determined total is accomplished. That round is finished and the player with the highest score is declared the winner! 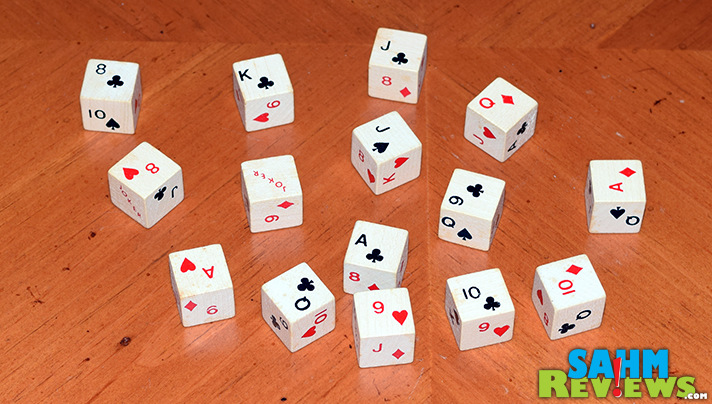 Showdown Poker turned out to be a fun little game that did require some thought on how to efficiently arrange the dice. The inclusion of a sand timer only made the stress greater, but it is necessary to prevent turns from dragging on. This way there is little downtime and play moves rather quickly. Supporting 2+ players, the length of the game is determined by the number of players and the total you’re trying to achieve.

Copies are readily available on eBay for very reasonable prices. If you’re into collecting dice, I’m sure you don’t have ones like this in your collection. And just one won’t do – they’re all different!

Have you ever bought a game just for the components?