Home / Technology / Hardware / Vacuuming From The Comfort of My Bed 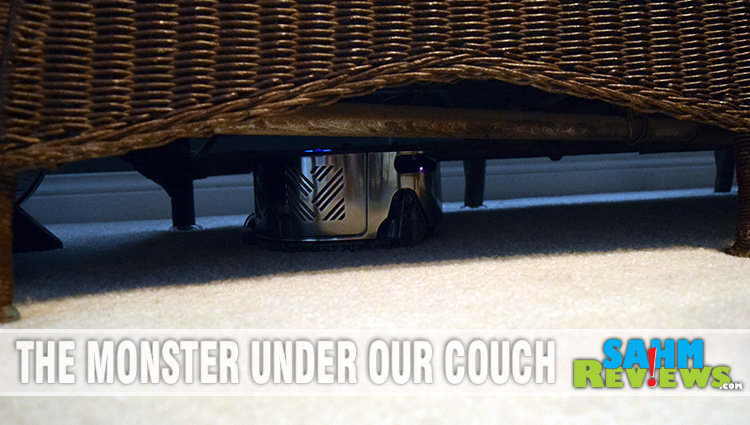 Vacuuming From The Comfort of My Bed

Everyone has that one brand that makes them smile. For my uncle, it’s Coca Cola. His wife, Pepsi. A friend flips whenever she sees Dooney and Bourke while another is head-over-heels for Disney. For me, one brand that has stolen my heart is Dyson.

Last year I told you about my quest to own my first Dyson so many years ago. It was when they were new to the states and only available in a few retailers. The price didn’t matter to me because I had read and researched on what a fantastic brand it was. I purchased my first Dyson and became a forever fan of the brand.

Ever since that time, I started watching their brand and their new advancements. Every time I walk into a public restroom, I take notice of the hand dryers and smile whenever I spot a Dyson Airblade. I’m in awe every time I see something like their fans or heaters or humidifiers. So how is it that I never knew they had a little Rosie? You know.. the robot that cleans up so you don’t have to.

Did you know about the Dyson 360 Eye Robotic Vacuum cleaner?!

Whew. So glad it wasn’t just me.

We used to have a robotic vacuum cleaner but it was cumbersome trying to get it to clean where we wanted and it wasn’t really a good option with three shedding dogs in the house. I generally used my Dyson DC07 instead because it did a fantastic job. Then one day… the sensors on the robot stopped working and fixing it would have cost as much as a new one. I wasn’t too heartbroken since we didn’t use it that often and our girls were old enough that THEY were our robot vacuums. I preferred my Dyson to the robot anyhow. Unfortunately, the girls are now at an age where they leave for school before 7 and return close to 5:30. Asking them to vacuum more than just their own space just doesn’t seem right to me. I’m constantly busy and fit housework in between the madness. So now I’m back to the idea of a robot vacuum cleaner and loving that Dyson, a brand that I fawn over, has one. 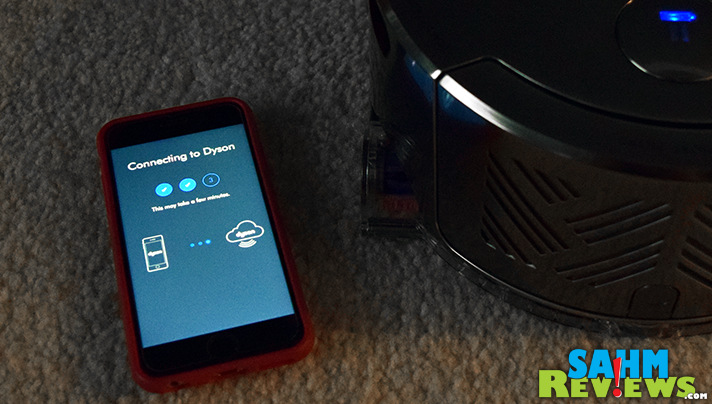 It’s not just your average robot, either. I can control it from my phone. You may (or may not) be asking why would I want to do that. Here’s why: Simply because I adore home automation. Our garage door, thermostat, lights and even humidifier are all accessible from our electronic devices and it’s fantastic. Whether we’re traveling or just too lazy to get off the couch or out of bed, we’re able to activate and deactivate these devices. Sometimes it’s a necessity such as cutting a trip short and wanting the home back to a living temperature, but other times it’s just convenience. Yes, I like being able to turn off my lights from the comfort of my bed just by picking up the iPad. Now I don’t even have to get out of bed to vacuum! 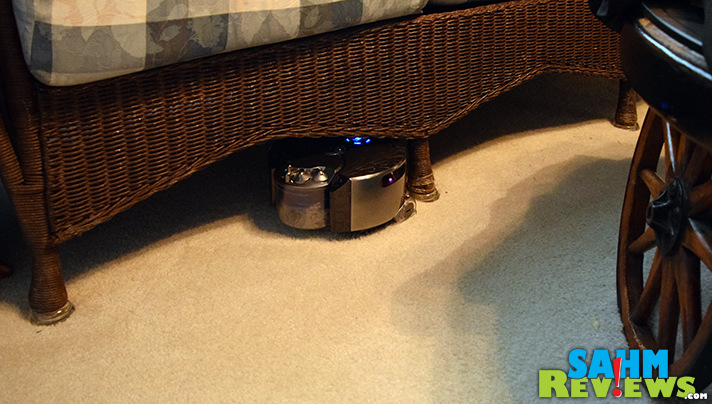 In true Dyson fashion, this isn’t just a robot that drives around randomly sweeping the floor as it goes. It’s smart. It maps out rooms and has areas that it knows it cannot go. It uses built-in sensors to detect drop-offs so it doesn’t fall down stairs, too. Scott laughs at me because I’m perfectly happy watching it drive around and cheer it on.

I couldn’t believe when it started cleaning under an end table that has about as much room for the robot and nothing else. I’ll be honest and admit that it’s an area I never vacuum because that would require me to move the entire table and who has time for rearranging furniture to vacuum? Ack. 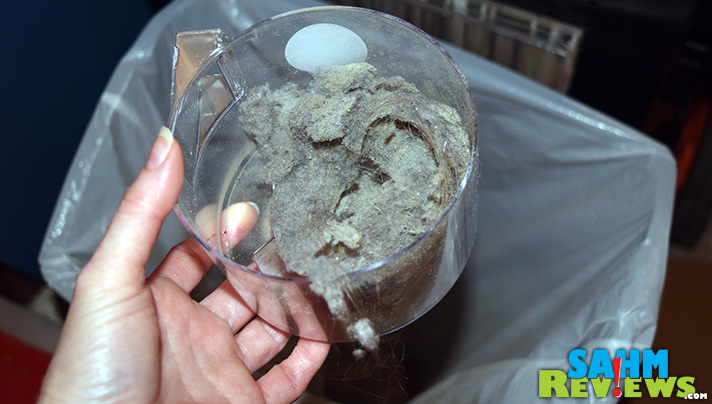 Which brings up the most embarrassing part of having a robot vacuum that drives under furniture that you don’t move and vacuum yourself… the stuff it picks up! I could not believe how quickly the bin filled up. It wasn’t picking up a lot of granules of dirt but a lot of dust and fuzz and hair that had gathered under the couch, chair and end table. Maybe all these little crevices of dust and whatnot are why I cannot stop sneezing. 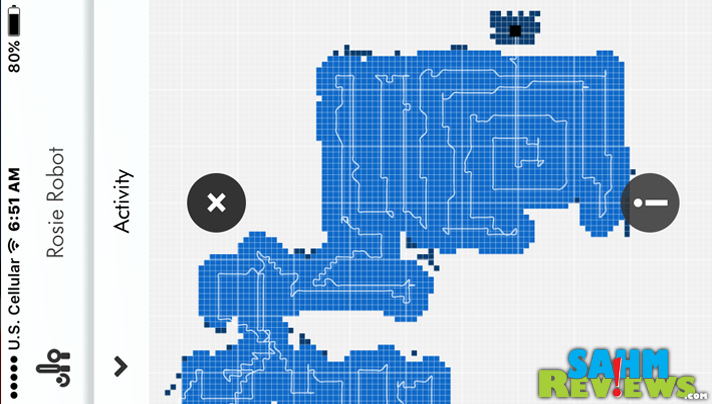 Ever been asked, “What did you get done today?” Often, my answer is a mixture of “answered email, did dishes, some laundry” followed by “I have no idea where the whole day disappeared.” Ask me what my robot did and I can load the map and see precisely where it went. Within the app (the same one where you can tell it to start and stop), you can find an activity log with maps of where the robot traveled, detailing areas that were considered limits. I’m still learning the ropes, but so is my Dyson 360 Eye Robotic Vacuum. 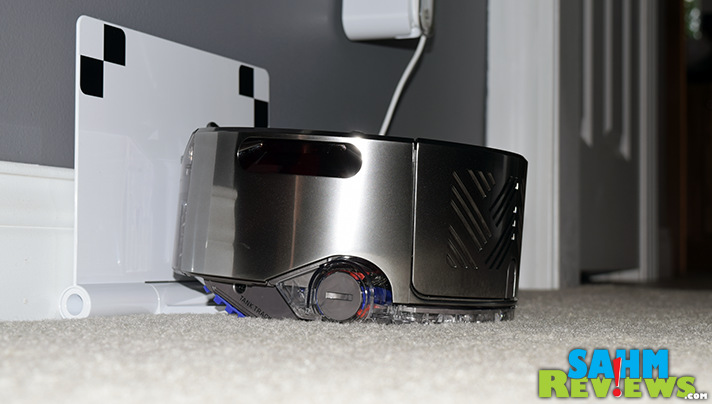 The Dyson robotic vacuum will return to the base when the battery gets low then head back out again when it has recharged. We have a couple throw rugs that have to be picked up before vacuuming so I haven’t set the Dyson 360 Eye Robotic Vacuum to run on a schedule yet. 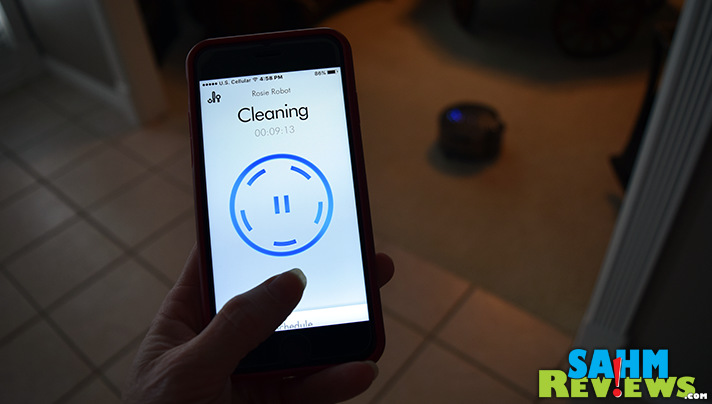 Instead, I start it from my app then tell it to return to the base when I’m ready to go somewhere. Even with these parameters, it has returned to the base to recharge before setting back on the mission again.

But I’ve only touched on the features. In addition to the fact it vacuums well, recharges itself and can be used for scheduling, the styling of the unit is great also. The docking station is flush with the wall and the charging cable is self-contained so it isn’t hanging around getting in the way. As a bonus, the app has a feature to send you notifications on your phone!

With a price point consistent with the quality that Dyson brings, it’s a device for people who are going to take advantage of the features it offers. I’ve already decided that the Dyson 360 Eye Robotic Vacuum is going to help me unclutter some of the piles I have on the floor so it can do a better job of picking up when I don’t want to.

And if you ask people that know my propensity for creating stacks and piles, that’s probably the best benefit… right behind the feature of being able to vacuum while still in bed.

Do you own any Dyson products?

17 comments on «Vacuuming From The Comfort of My Bed»