I’m a very analytical person, analyzing everything from money to the logistics of a hectic schedule. That’s very likely why I enjoy strategy games so much, but also why I am particular about them. They can’t be too heavy because I over-analyze at length and bore my opponents. (That can be considered a legitimate strategy for winning, right? Death by boredom?) But as much as I enjoy gaming as well as writing, word games just aren’t my thing. I never feel like I can muster enough brain power to think of words that score the big points.

Maybe it’s because I have some pretty intelligent friends, a brother-in-law who used to compete (and place) in national-level Scrabble tournaments and a husband who is a sponge for reading and knows more words than I can dream. The last time I had a chance to try a new word game, I decided to have one of those brainy friends who is part of a book-writers club take lead on it.

This past Thursday we joined a couple thousand other gamer folks at Geekway to the West for 4 days of nothing but play. There were board games of all types and a massive library where you could check out games. You weren’t relegated to hanging with the same people, either. If there was something you really wanted to try, all you had to do is grab one of the “Players wanted” signs or even a “teacher wanted” sign and sit down at an open table and wait for someone to join you. It’s a cool concept and a very social way to game. I loved it and already marked next year’s event on my calendar.

One day, as Scott and I passed through one of the many gaming areas, two individuals asked if we would be interested in joining them for a game of Letter Tycoon. Knowing that Breaking Games had provided me a copy that was sitting on the table at home awaiting a write-up of its own, I decided this was a great opportunity to test it out with someone who was already knowledgeable about the game. The learning curve is one of the most difficult parts of trying new games so no matter how I fared on this individual match-up of Letter Tycoon during Geekway, I saw it as a huge win in my book.

But to my surprise, it wasn’t as overwhelming and intimidating as I expected. Actually, I REALLY enjoyed it which is saying a lot since word games aren’t my favorite genre to play. What makes this game different is the scoring mechanism isn’t about being able to manufacture a long word, double or triple scoring a tough letter. Letter Tycoon is best described as a cross between Scrabble and Texas Hold ’em with tidbits of Monopoly thrown in.

Yeah, that painted a picture, didn’t it? If you’re old-school (read: old) you may remember the days when people in the bonus round of Wheel of Fortune had to select their letters and hope Vanna turned something. Some letters became so commonly requested the bonus round rules were altered and those frequently-called letters (R,S,T,L,N and E) were assigned automatically. From there, contestants were allowed to select an additional few. You’ll apply a similar concept when you’re playing Letter Tycoon. You’ll hear in a minute why it makes a difference. 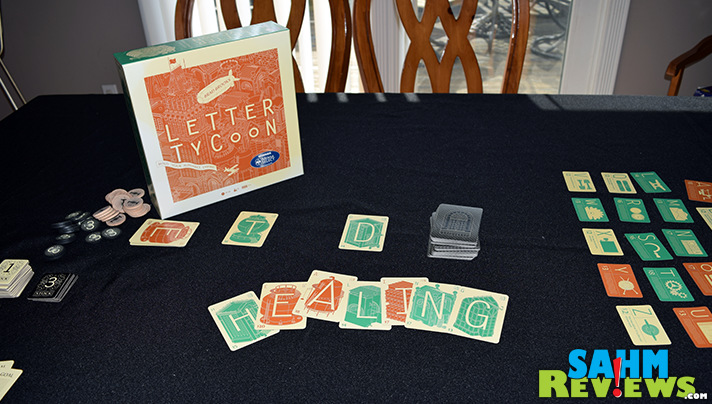 Essentially, the game revolves around the idea of creating one word using the 7 letters in your hand along with any or all of three community cards in the center of the board. Once cards are used, whether from your hand or the community pile, they are discarded and replaced. Scoring is based simply on the length of the word with no bonuses given for using difficult letters such as Q, X and Z. Shifting your mind from thinking you need to maximize the use of those letters is difficult if you’ve grown up playing Scrabble, but it’s critical. If at any point you don’t like cards in your hand, you can discard them at the end of your turn and draw new ones. 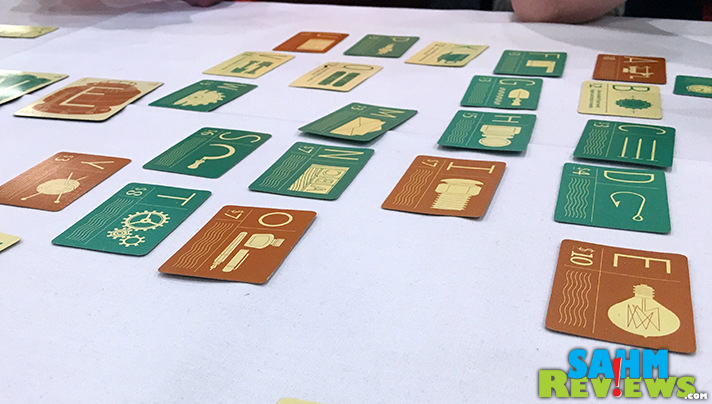 Here’s where things get interesting. In the same manner as Monopoly, you can purchase stock in various letters that you have used. If another player utilizes those letters in one of their words, whether it comes from their hand or the shared cards, you are compensated $1 for each time it is used. The patents for some letters offer a bonus such as “You may build two words.” and “You may add an ‘S’ to the end of your word.” So you might be compelled to keep that nasty “Q” until you are able to play it simply so you have the bonus listed on the patent.

Money is required to purchase the patents and is earned based on the length of your word in addition to funds acquired when another player uses a letter that you hold a patent on. The only way to purchase more patents is to have enough money stored up. While E is a common letter, it costs $10 to purchase the patent so it’s unlikely you’ll be able to snag it early in the game. Since end-game is triggered when someone invests in a designated value of patents, some strategy comes into play as to whether you want to create a word using a letter that would award funds to another player. Limit their revenue source to what they can earn on their own is crucial. 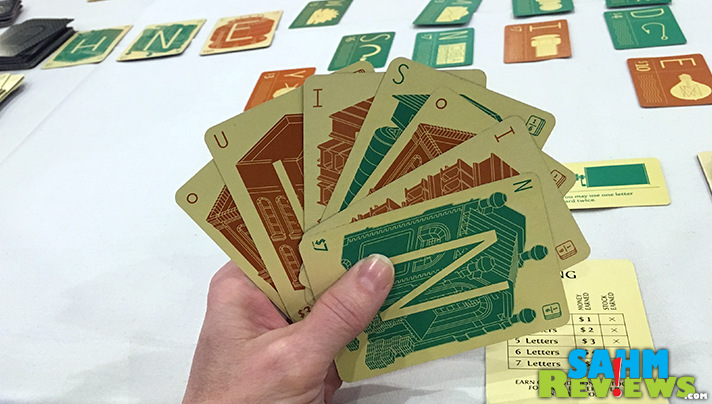 The only thing I found difficult about the game and the concept is that unlike Texas Hold ’em, the cards in the middle change as soon as someone adds them to their own word. That is great for creating a churning of word possibilities but also can slow the game if a player has banked on using something from the center. Yeah… that pretty much describes yours truly. More than once I felt rushed to compile a new word. Thank goodness the game doesn’t include a timer!

While word games have never been my favorite, Letter Tycoon will join me this Friday when we head to our weekly game night meetup. You can pick up a copy of the game on Amazon, learn more about Breaking Games and their various products on their website or connect with them on Facebook or Twitter.